Madonna di Campiglio - the origins of a mountain resort

What’s in a name? I knew a lot about the mountain resort of Madonna di Campiglio but not the origins of its name so I decided it was time to find out. What or where was Campiglio? It was probably derived from the word campiculus which means sheltered glade. In the twelfth century that was all there was in the small valley that is now the home of the chic resort Madonna di Campiglio. 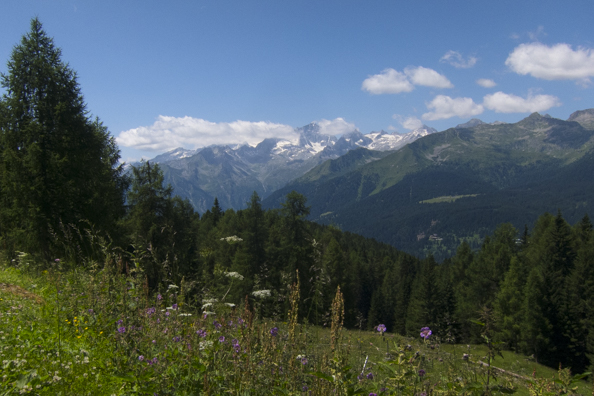 However, traversing this valley was the only way to get between the more fertile valleys of Val di Non and Val di Sole above and Val Rendena below and was a section of the main route between Northern and Southern Italy. Settlements are bound to develop with the frequent passage of travellers and it is recorded that at the end of the twelfth century a small hostelry was established offering assistance to the poor as well as food and shelter for the travellers. It is believed it was established by one Raimondo to repent for his sins and to honour the Virgin Mary. The hostelry received many donations from devotees of the church and by the fourteenth century it had become one of the most important sanctuaries in the region of Trentino with several buildings that included a church and a monastery. 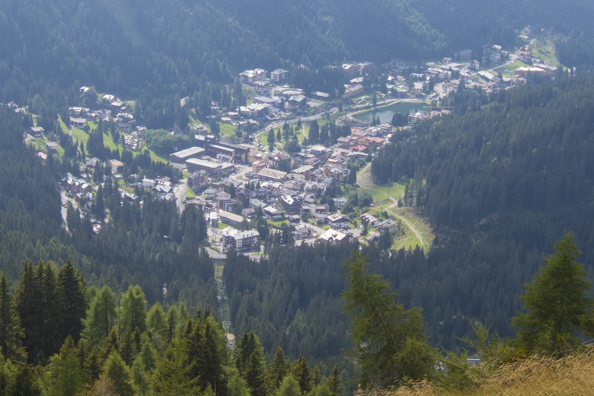 By 1515 only two nuns, Simona and Antonia, were left in this establishment and it was rumoured that, due to their criminal activities, it was not safe to stay there. It was not long before the keys were returned to its owners the Cathedral of Trento and its life as a monastery ended although the church remained in use especially during the summer when timber was being felled and the saw mills along the Sarca river burst into life, cows from the valley grazed in the alpine meadows and hunters stalked deer in the woods and forests. 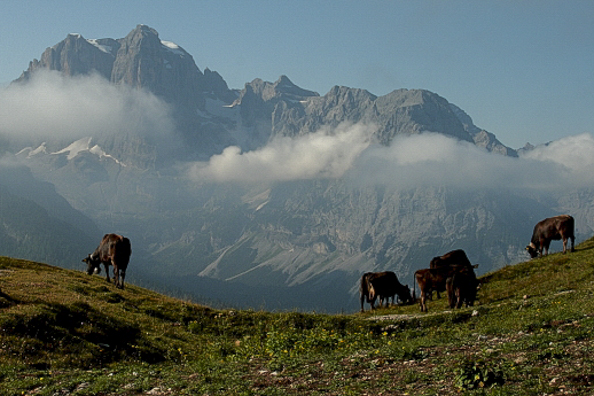 The monastery buildings remained empty until 1836 when they were rented by Giacomo Batiste to be used as stables for travellers and a tavern during the summer. His son, Giovanni Righi Batiste, inherited both the rented buildings and his father’s passion for the place and eventually managed to buy the property and subsequently opened the first hotel in the area in 1872 – his Stabilimento Alpino. That same year he began the construction of the first road between Madonna di Campiglio and the other towns in the Val Rendena which he financed himself. Legends abounded that the money had come from pots of gold Righi had found buried on his land by travellers and vagabonds. He did attempt to recoup his investment by charging a toll to use his road but this met with violent opposition and when his hotel burnt down in 1877 it was suggested that this was no coincidence. When Righi died in 1882 he left so many debts his wife was forced to sell the land. 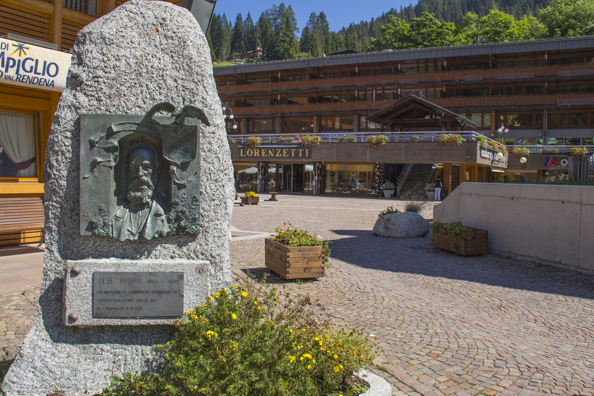 This land was acquired by Franz Josef Oesterreicher in 1886. It was rumoured that he was an illegitimate son of the Emperor Franz Joseph who had bought the land to keep him away from the Hapsburg court in Vienna. He certainly left his mark on the town as he built and new church and then demolished the old one and he built the first modern hotel in the town, the Grand Hotel Des Alpes. Both buildings are still in use today. 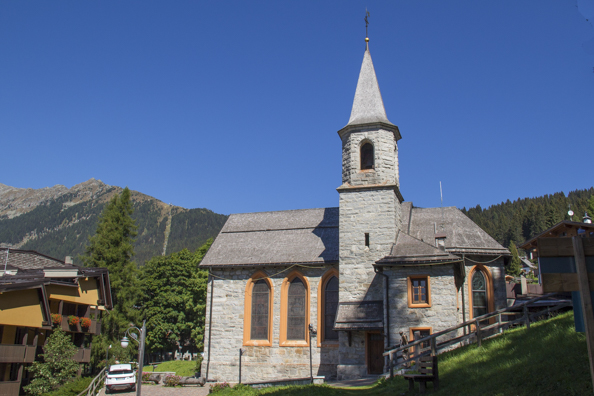 A connection was established between this resort high in the Dolomites and the mighty Austro-Hungarian Empire and Madonna di Campiglio became a favourite summer haunt of the nobility of the Hapsburg court in Vienna. They would stay at the Grand Hotel Des Alpes and today their presence is remembered by pageants in the summer and a week-long carnival in the winter. Franz Josef himself and his young wife the beautiful Elisabeth of Wittelsbach, nicknamed Sissi, visited the resort on two occasions. Sissi especially was attracted by the dramatic scenery that surrounded the town. 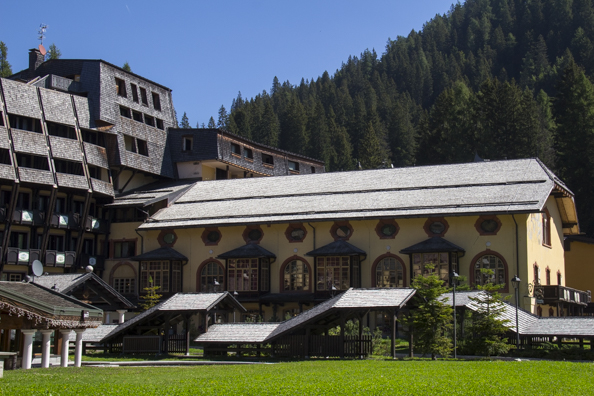 The stunning pinnacles of the Dolomites have been created by their morphology – thick layers of rock supported by layers of less resistant rock such as marl and sandstone. As the softer rocks have eroded the huge slabs of rock they were supporting have crashed down creating the fingers of pale grey scree creeping towards the tree line like static waterfalls. It was easy to understand why Déodat de Dolomieu had found the mystery of their origin so compelling and while travelling from France to Rome in 1789 he collected some of the rocks and analysed them. He discovered that these rocks were not, as had been assumed, limestone but a calcium magnesium carbonate. Subsequently both the mineral and the rock were given his name, Dolomite. Seventy-five years later two itinerant English geologists called Gilbert and Churchill published a book entitled the Dolomite Mountains – an account of their exploration of this region hitherto known by a variety of names including the Venetian Alps and the Monte Pallidi (Pale Mountains). Both the book and the name became popular and soon hikers and climbers were frequent visitors enjoying not just the challenge of the peaks but also the entrancing scenery – the orange glow of dawn and the rose tinted peaks as the sun set. 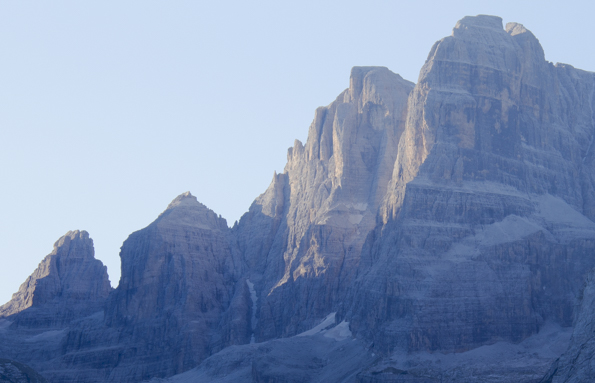 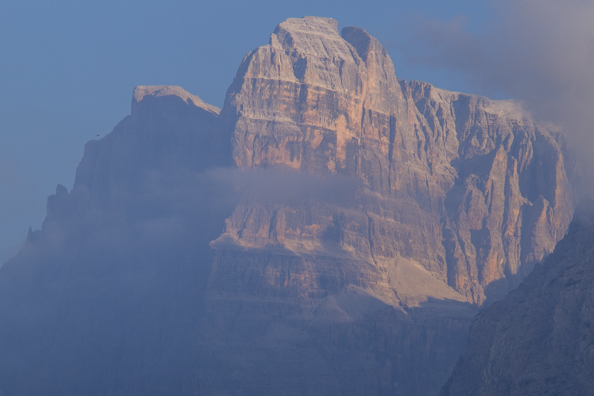 Initially local people and deer hunters would act as guides for walkers and climbers but then in 1872 the Società degli Alpinisti Tridentini was founded in Madonna di Campiglio for the promotion of activities in the mountains, the provision of shelter and the publication of information. Now part of the Club Alpino d’Italia it has remained autonomous and between the wars restored and repaired war damaged shelters as well as opening up the excellent network of paths for everybody from all walks of life to enjoy. Many of these shelters or rifugios now feature restaurants where visitors in both the summer and the winter can enjoy traditional dishes such as polenta, canerderli and strangalopreti. 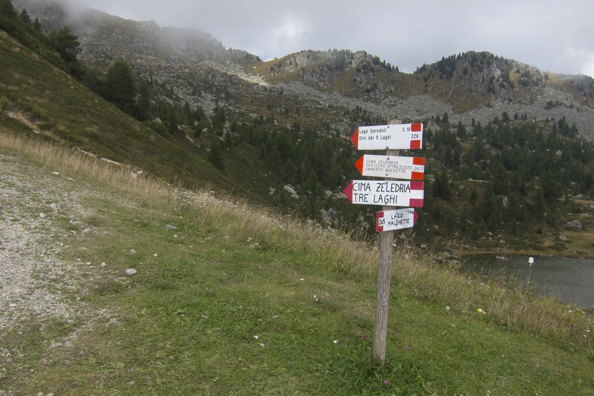 During the First World War the mountains surrounding the village were the front between the opposing armies of Austria and Italy. After the war, in 1917, the region of Trentino became part of Italy and for a while this poor and infertile rock strewn region had to rely on timber, it’s only natural resource – apart from its mountains – and they were soon attracting visitors again. The Oesterreicher family remained in Madonna di Campiglio until 1955 after which their property was gradually acquired by entrepreneurs from other regions of Italy and the whole aspect of the town changed as the tourism boom of the sixties took hold producing a flurry of building that fashioned the present resort. 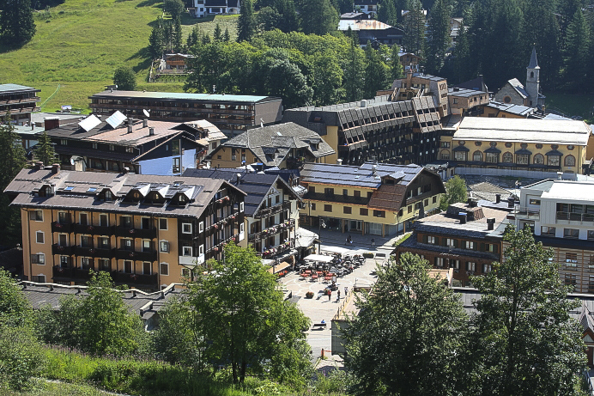 There are some interesting local success stories, for example, the Lorenzetti family who own the fabulous Hotel Lorenzetti, a fashionable boutique and two sports shops and was built on the hard work and foresight of Giovanni Lorenzetti. He left school early and by the age of fourteen he was working in the ski-hire section of Serafini Sport. By the time he was sixteen he had accumulated enough experience to open his own ski hire business in the lobby of the Hotel Montanara. This business thrived and he was able to invest in his first shop, Barbara Sport, named after his second daughter. By then he was married to Silvana Saudi and they had two young daughters, Assunta and Barbara. Initially the hotel was a joint venture with an uncle when they bought a building together. Initially Giovanni’s half housed a bed and breakfast but within five years he owned the whole building and it was transformed into a hotel and welcomed its first guests in the winter season of 1990/1991. Over the years the hotel has established an excellent reputation for its cuisine, comfort and stunning views of the Brenta Dolomites. 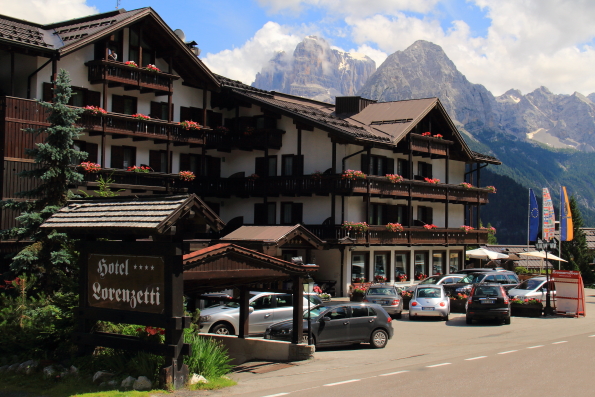