According to Alan Titmarsh the lovely thing about follies is that they are not necessary. A folly is defined in the Oxford English dictionary as a costly ornamental building with no practical purpose, especially a tower or mock-Gothic ruin built in a large garden or park. During the eighteenth century Frederick, Prince of Wales and subsequently his wife Princess Augusta worked with architects Sir William Chambers and the Earl of Bute to create a series of garden follies in Kew Gardens. The overnight follies, made of flimsy materials, are a legend of Kew Gardens, were not built to last but some of them still grace the Gardens. On my first visit to Kew Gardens I had noticed one of them, the Temple of Aeolus a small temple on a mound not far from the entrance and that was where I started my second visit. 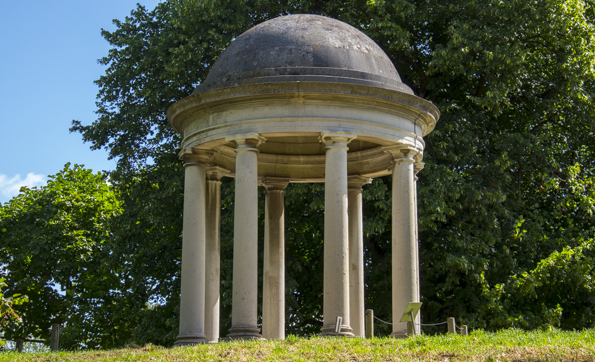 I made my way through the woodland area up to the temple and was rewarded with some great views of the gardens below me and the Jodrell Laboratory. Research has been an important aspect of the Royal Botanic Gardens since the first laboratory was built there in 1877 and named after Mr T.J. Phillips Jodrell, who provided the necessary funds. By the 1950s this building was so overcrowded it had to be replaced with a new laboratory but it was not long before space became an issue again and the seed conservation section was moved to Wakehurst Kew’s garden in Sussex. As the research programme continued to expand a large extension was added to the Jodrell Laboratory in 1994 and the Wolfson Wing was added ten years later. 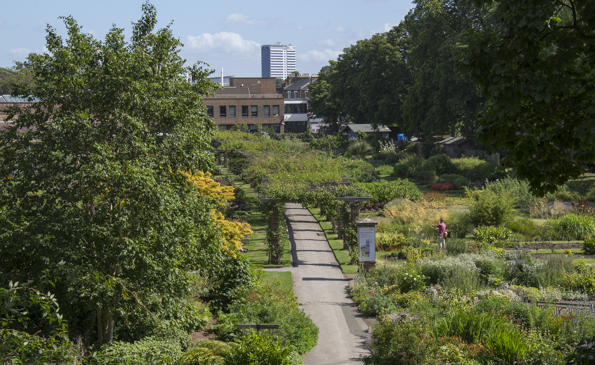 After threading my way back down the hill through some pretty woodland paths I set off to find the most famous folly in the Gardens, the pagoda which I approached down one of the three vistas from the Palm House Fifty metres high with ten storeys the Chinese-style pagoda . The Pagoda was designed and built by William Chambers in 1762 when Chinoiserie was fashionable and it quickly became an icon of the gardens and remains so to this day although it has undergone several restorations none as colourful as the original. The current restoration promises to see a return to its original splendour. 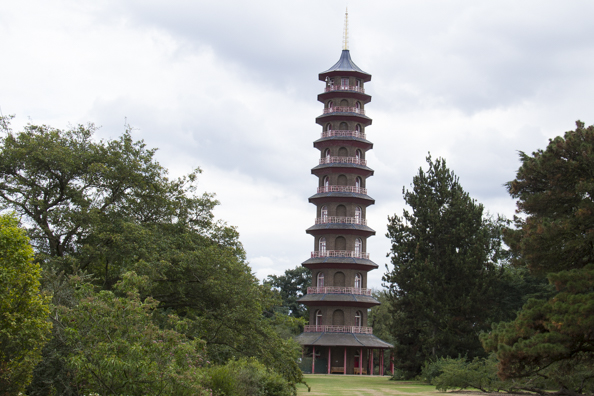 The pagoda vista forms a triangle with the Cedar and Syon vistas – the former looks down to Syon House in Syon Park on the banks of the River Thames and outside the boundary of the gardens. The third vista runs from the Palm House to Syon House. 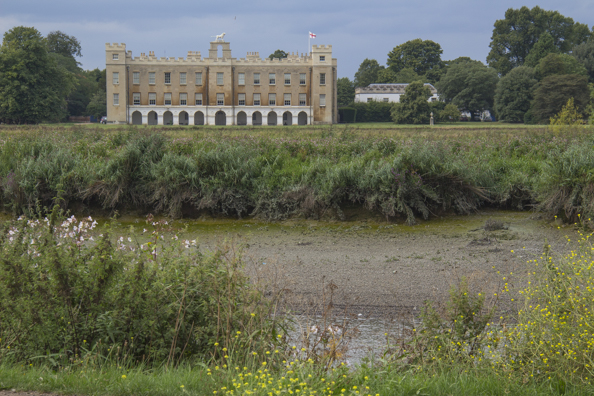 Not far from the pagoda is Japanese landscape which was designed to complement the Japanese Gateway or Chokushi-Mon (Gateway of the Imperial Messenger) that was originally created for the Japan-British exhibition in 1910 after which it was reconstructed in the Gardens. I walked through the three gardens comprising this landscape, the Garden of Peace, the Garden of Activity and the Garden of Harmony enjoying the simplicity of their layout and the contrast of its manicured appearance with the woodland that surrounds it. 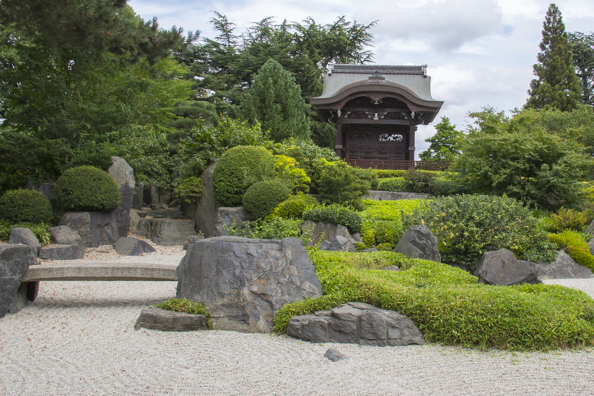 Walking through that woodland I glimpsed the rusty brown pillars of the tree top walkway. One attraction at Kew Gardens that is definitely not a folly. I climbed up the spiralling staircase (there is a lift) and enjoyed the fascinating experience of walking through the tree tops reading snippets of interesting information inscribed along the way. The views from there are wonderful and in particular it was a chance to appreciate the splendid Temperate House which is currently under restoration. Having explored the tops of the trees visitors can also view the roots by entering the Rhizotron through an apparent crack in the ground which gives access to an underground laboratory and a two hundred metre passageway. 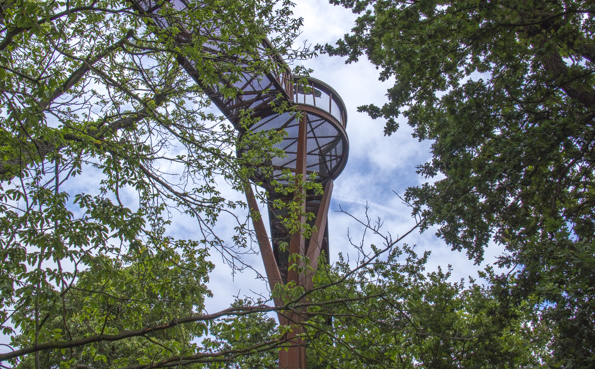 Around 1754 a small cottage single-storey cottage was built in the grounds of Richmond Lodge (now the western half of Kew Gardens) was given to Queen Charlotte by her king and it became her private haven and subsequently acquired a second floor. The cottage grounds include a wonderful bluebell wood. 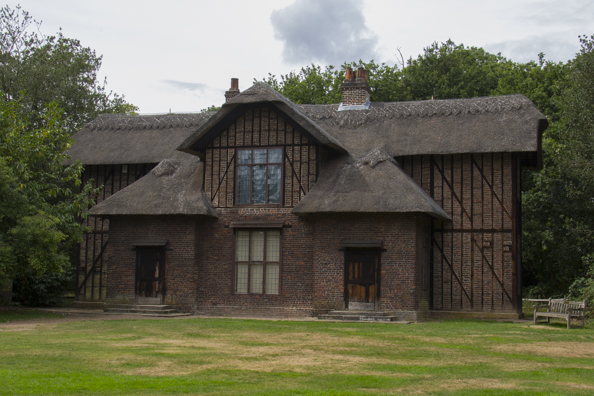 When Queen Victoria ceded the cottage to Kew it was on the condition that the surrounding woodland should be kept in it is natural state and this wish was respected as it now forms part of the Kew Gardens Conservation Area I was disappointed that no stag beetles were visible on the Stag Beetle Loggery which was created as a safe haven for the endangered stag beetle. But I had the pleasure of watching children and their parents exploring the log trail and having a picnic at the Alice in Wonderland table nearby. 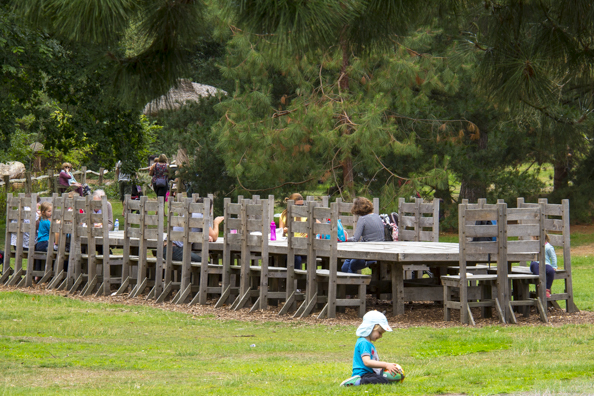 My wanderings had brought me to the tip of the Lake and I strolled along its bank enjoying some solitude. I should have brought a picnic with me and sat on one of the many benches scattered around the grassy surround continuing the tradition of a clearing created here by Capability Brown when he landscaped Richmond Gardens. This lake replaced a lake with an island that was established in the Gardens during the 1740s but had largely disappeared by 1837. During the 1840s Sir William Jackson Hooker created the present lake as he wanted an open flow of water through a portion of the pleasure grounds. To create this lake he extended the gravel pits – excavated during the construction of the Temperate House – and used the excess materials to create four islands in the lake. His son Joseph further extended the lake and in later years the islands were densely planted with trees. Nowadays these undisturbed woods are important conservation areas. 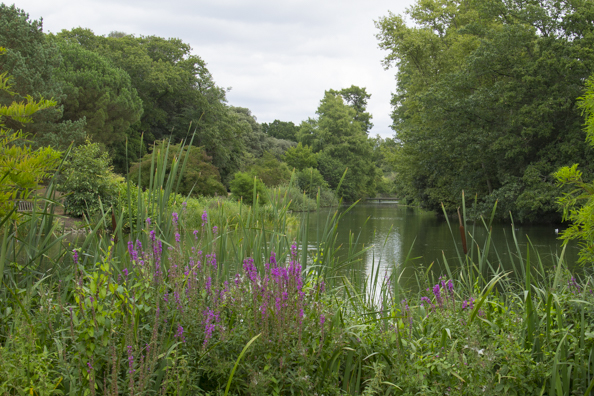 An exciting development on this lake occurred on this lake in 2006 when the Sackler Crossing the first bridge over the lake, was installed and named for one of the benefactors, Theresa Sackler, whose donations made it possible. The crossing, designed by the architect John Pawson is part of a new route to give access to the more isolated sections of the Gardens and emulates the ideals of some of the earlier designers of the gardens – a construction that should be stumbled upon (William Kent) and undulating curves (Capability Brown). The black granite walkway curves low over the water between walls of flat bronze posts that from different aspects appear to be solid or nearly invisible mimicking the properties of water that can appear to be both solid and fluid. 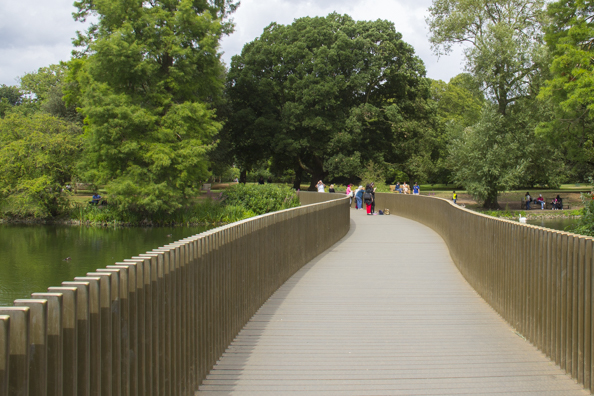 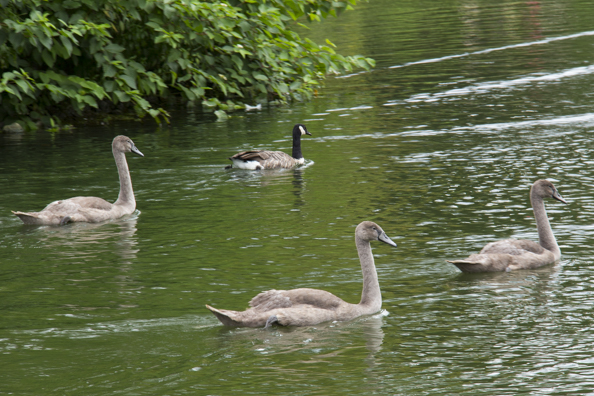 As I was walking back through the gardens I spotted the roof of a small building surrounded by bamboos and stopped to investigate. It was the Japanese Minka House This traditional Japanese farmhouse, constructed of natural materials, was donated to the Gardens in 2001 and posters displayed inside tell the story of the inhabitants of these buildings which have now largely been replaced by modern housing. 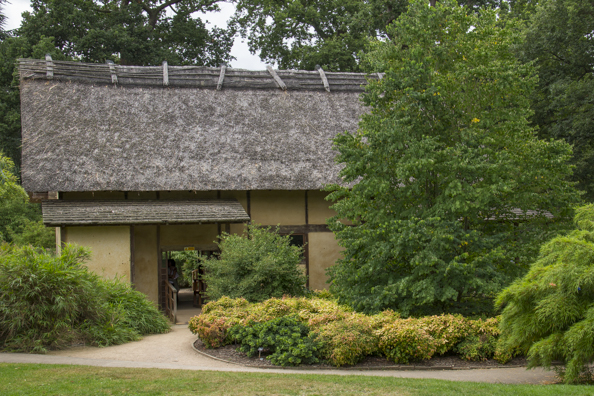 When the British Royal Family developed their gardens at Kew they created a national treasure which, in 2003, became a UNESCO world heritage site as features in its historic landscapes gardens reflect the changing periods of this art through the eighteenth, nineteenth and twentieth centuries. Botanic collections are also housed in the Gardens and they have made a significant and continuous contribution to the study of plants worldwide. 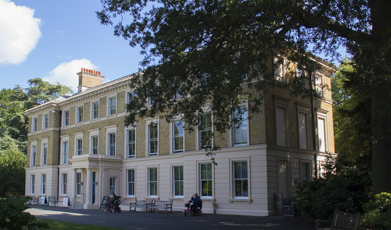