Palazzo Pitti - a snapshot of Florence

I have visited Florence many times and followed the usual tourist trail but as soon as the official tour is over and I am free to wander I always make my way to the same place, a snapshot of this famous town and an oasis from the throng – Palazzo Pitti. This large historic palace is a short distance across the River Arne from the historic centre. For many years it was the residence of the rulers of Florence and in 1919 it was given to the Italian government which transformed it into a museum complex. 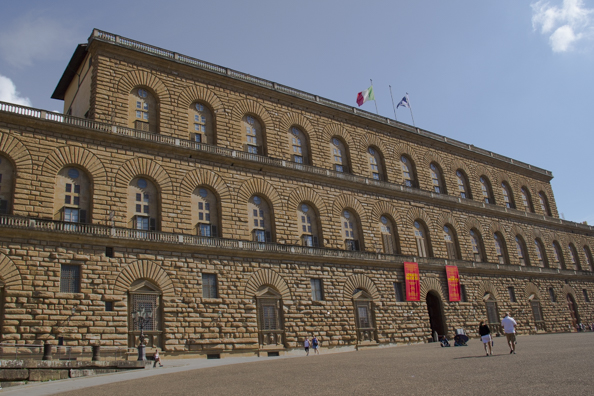 Its story began in 1458 when Luca Pitti, a wealthy Florentine banker, commissioned the construction of a palace intended to rival those of the ruling Medici family. Filippo Brunelleschi is believed to have been responsible for the design of the building but as he died twelve years before it was built it is more probable that his assistant Luca Fancelli was the architect responsible for its construction. It was built in Oltrarno which at the time was a rural area. 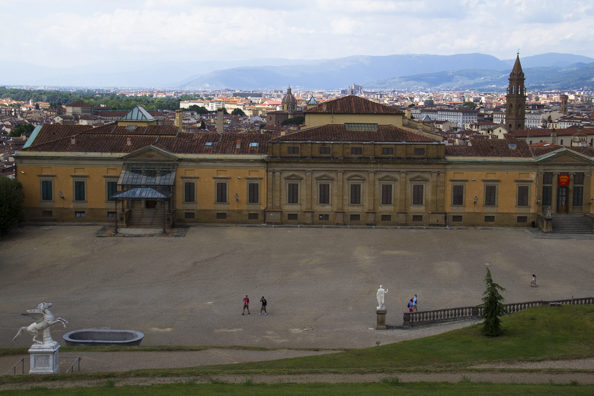 In 1549 the then grand duke, Cosimo 1 de’ Medici, bought the palace for his Spanish wife, Eleonora di Toledo when the Pitti family had financial problems. Eleonora suffered from poor health and Cosimo was convinced the rural environment would be good for her. The Medici family moved from the Palazzo Vecchio (the seat of government) to the Palazzo Pitti which became the main residence for the rulers of Florence. The Royal Apartments are open to the public and serve as a wonderful reminder of the opulence of the period. 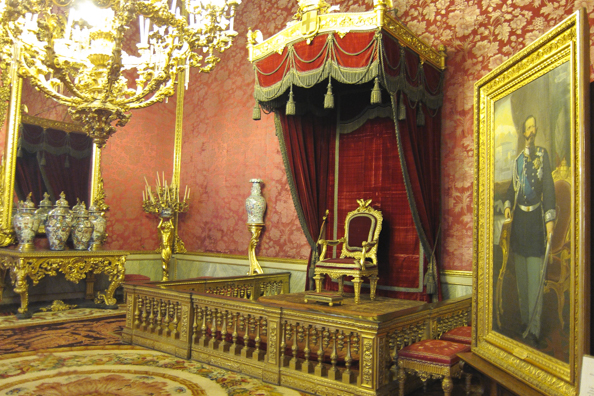 Members of the Medici family were able to move between their new home, the Uffizi (then their offices for administration and now a famous art gallery) and the Palazzo Vecchio without having to go outside thanks to the corridor that Giorgio Vasari was commissioned to build linking these buildings. It took just five months to build the Vasari Corridor that measures one kilometre and has recently been restored and is now open for guided tours. 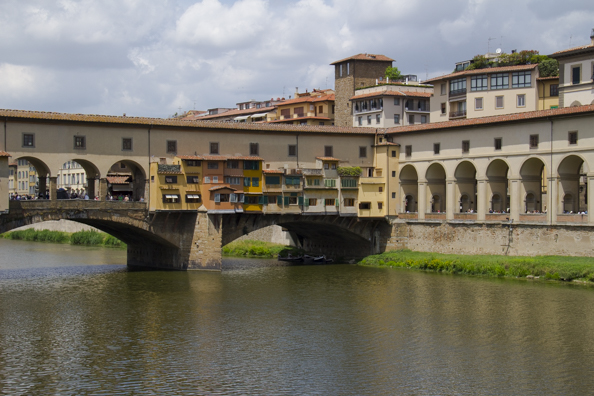 Soon after the Medici family acquired the palace Bartolomeo Ammanati was commissioned to expand it and he worked on it from 1558 until 1570. Ammanati was responsible for the inner courtyard. The Artichoke Fountain on the terrace surrounding this courtyard was the work of Giovanni Francesco Susini (1641) and Cosimo Medici was also responsible for the creation of the Boboli Gardens behind the palace. 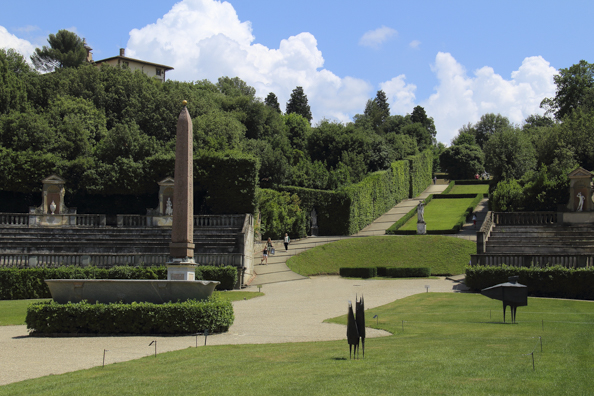 The Medicis ruled Florence until 1737 when the House of Lorraine came to power and expanded the palace building the two wings that still flank the Piazza dei Pitti at the front of the building and the completely renovated the interior. Later owners were the House of Savoy, the Bourbons and even Napoleon and the last owner was the Italian King when Florence was the capital of Italy and Palazzo Pitti was the royal palace. In 1919 King Vittorio Emanuele III donated the whole complex of palace, museums and gardens to the Italian State and the Palazzo Pitti Museum was created and opened to the public. Apart from the palace and the Royal Apartments this complex includes the Galleria Palatina which houses an important collection of Renaissance and Baroque paintings, the Galleria del Costume with a collection of clothes from the Medici era to the present day, the Museo delle Carozze (royal carriages), the Galleria d’Arte Moderne and the porcelain museum housed in the Casino del Cavaliere in the Boboli Gardens. Tickets can be bought in various combinations and some combinations give access over two consecutive days. 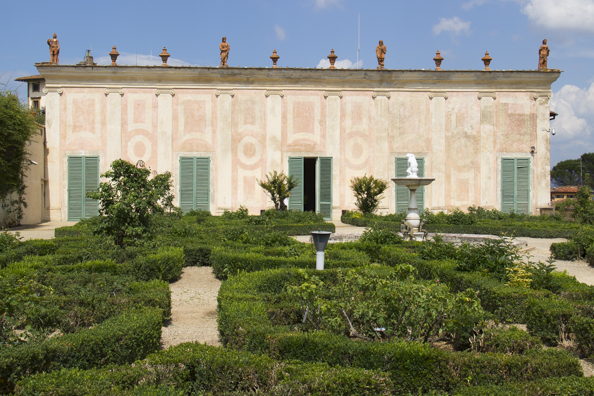 Even two full days would not be long enough to do the place justice as there is so much to see. Having worked my way through the various museums – my favourite was the costume gallery – I am now concentrating on the gardens. Before starting my exploration I walked to the city end of the building to enjoy the lovely views of Florence spread out below me and in particular it’s wonderful Duomo (cathedral). 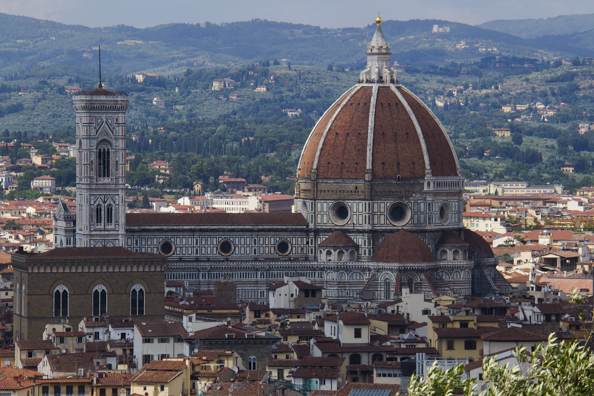 I wandered around the gardens enjoying the statuary and the fountains and puzzled over some of the sculptures in the exhibition of works by Lynn Chadwick and spent ages watching the revolving section of the piece entitled the Ace of Diamonds. This was one of the joys of visiting these gardens, there was always something new to peruse.

I walked up the charming spiral staircase leading to a terrace garden – Giardino del Cavaliere. After admiring the symmetrical flower beds and smiling at the antics of the stone monkeys around the fountain I went into the porcelain museum in the Casino del Cavaliere and marvelled at the delicacy of the ceramics on display. 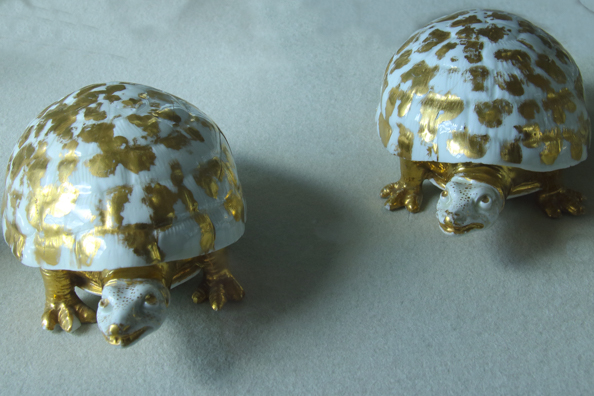 When I reached the far end of the gardens I noticed a sign pointing to another entrance, Porta San Giorgio. I remembered having seen on a map of the gardens that there was a fortress just outside this gate, Forte di Belvedere surrounded by the Fortezza da Basso. I set off to investigate and was soon on the ramparts of the fort which perches on the top of the Boboli Hill enjoying the panorama of the city below. Initially I was distracted by the bronze figures scattered around the fort, some sitting on walls, a long line of crouching figures and a big pile of figures in different poses – all the work of Anthony Gormley and part of the current exhibition HUMAN. I could not resist the photo opportunity presented by the heap of figures. 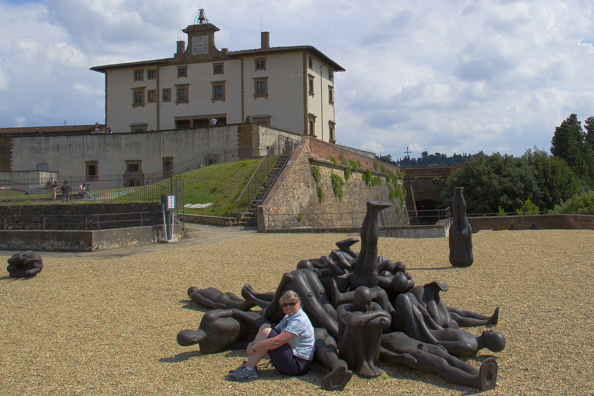 Fortezza da Basso was built just outside Porta San Giorgio in the city walls on Boboli Hill the only high ground within (or nearly within) the walls. It faces the hills across the River Arno which had always been considered a weak spot in the defences of the city. Originally known as the Fortezza di San Giovanni Battista it then became known as the Fortezza da Basso. The main reason the Medici family built this fort was for their own protection against disgruntled citizens but it was also a useful addition to the city’s defence system. The keep or Forte di Belvedere with its panoramic terrace overlooking the town preceded the construction of the fort and was used as the command centre. The fort fulfilled a military role for centuries until it was transferred to the state. It was never attacked by anyone and today it has become the ideal place for open-air exhibitions of works of art. 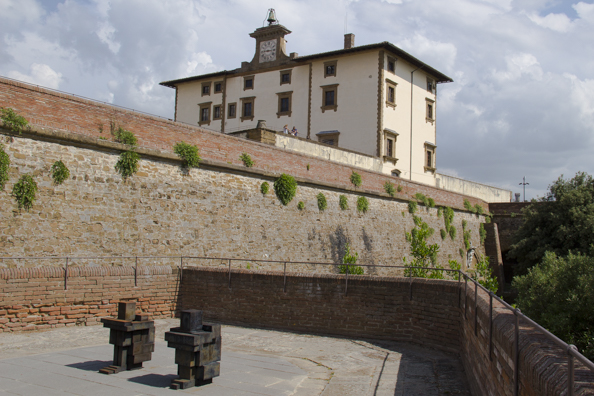 I walked back through the gardens via the rococo Kaffeehaus which was used for parties when the Grand Dukes were in power. Curiosity beckoned me inside fuelled by a vision of pastel colours through an open window and I was rewarded by a beautiful interior and my first aquaintance with the court dwarf Morgante who is also featured on a drinking fountain at the back of the palace. 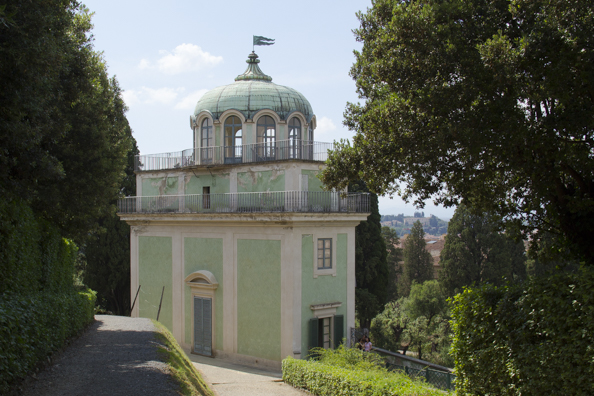 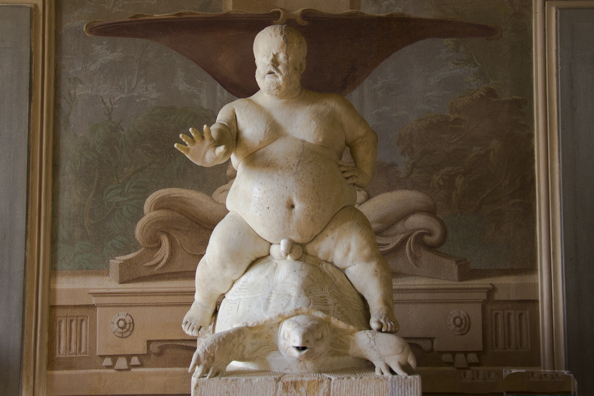 The afternoon had flown by and it was time to make my way back to the station. Just one last treat – an ice cream at Venchi famous purveyors of fine chocolate and fabulous ice cream.