Captivated by this fascinating town I was back in Pistoia the following week and this time there was no doubt regarding the whereabouts of the centre. Crowds of people were flocking to the Piazza del Duomo where the market is held on Wednesday and Saturday. 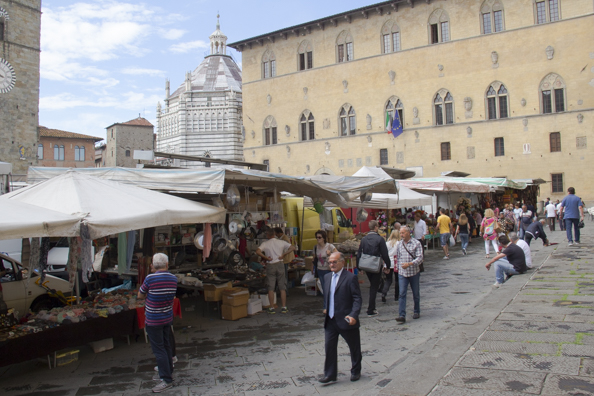 But the stalls also spill out into the surrounding streets and enterprising shop owners erect small stalls outside their premises to display their wares. As it was threatening rain that day some traders were not wasting an opportunity to sell their umbrellas. 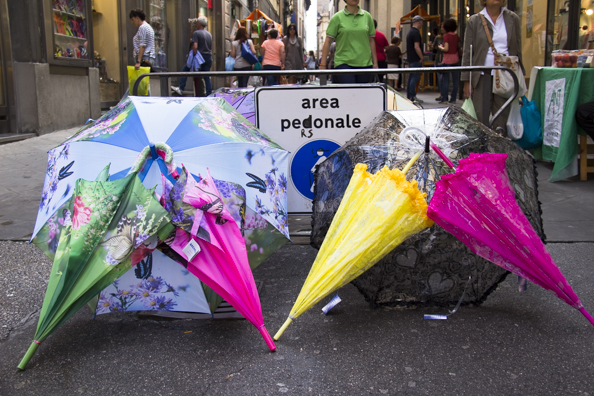 Today my priority was the Ospedale del Ceppo as I had heard about the underground tour of Pistoia that started in the hospital. To translate the name of this place can take a whole paragraph as a ceppo was a box for donations that was made by hollowing out a tree stump. Rather than use any of the translations I have come across such as hospital of the yule, the stump, the strain, the log, the trunk I am going to keep to the Italian name. This old building is just a few minutes walk from the centre and I had soon left behind the bustle of the market and found my way into the ticket office. The exterior of the building was surrounded by scaffolding so I could not see the famous glazed terracotta frieze that adorns it. But I was soon to discover that this meant I would have the opportunity to go up onto the scaffolding with a guide to get a close view of the frieze. I was directed to a waiting area outside the ticket office that also served as the waiting room for a benefits office. The rest of the hospital had closed down in 2013 and was currently being restored and converted into a museum. I was delighted to discover that I was in a group of one so I had a very personal tour of the frieze. 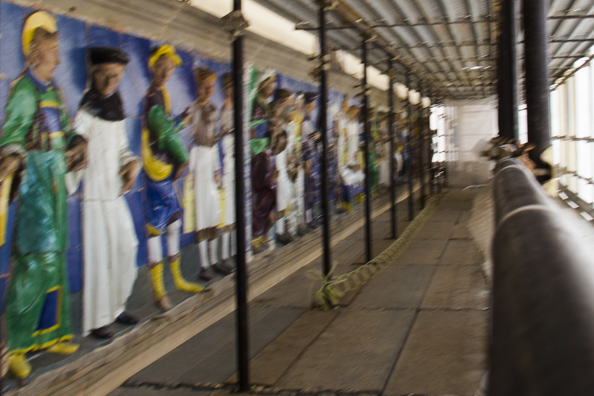 This frieze, most of which is the work of Santi Buglioni in the della Robbia style, tells the story of the hospital from its inception as a refuge for pilgrims to its development as an important teaching hospital. The medical school was officially founded in 1666 and students had lectures in the beautiful anatomical amphitheatre which was where we started our tour of underground Pistoia. We had set off from the ticket office inside the old hospital building and followed a long corridor that emerged in a small piazza where we went inside a small and very ordinary building – on the outside – but the interior was exquisite. 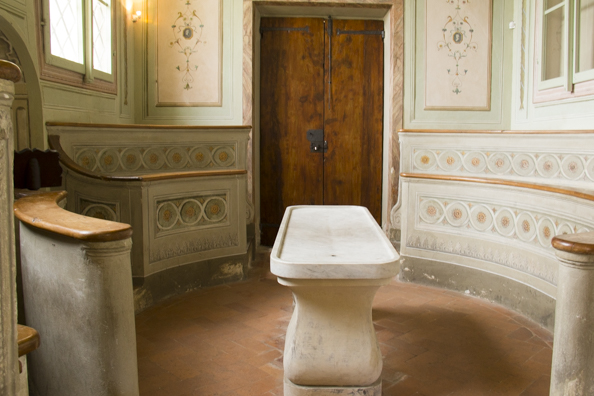 After re-tracing our steps we went back into the hospital to begin our tour of the tunnels that stretch beneath Pistoia. The old hospital was built above ground and incorporated into a bridge over the River Brana that flowed through the city. I was fascinated by the maze of ancient bridges and local industries including an oil mill (frantoio), a medieval laundry and Il mulino Beccaccini, a metal making mill – all using water from the River Brana that had been diverted underground and converted to a small stream running alongside the city walls. These tunnels were also used to dump rubbish and dispose of dirty water from the streets above through small openings in the brickwork. It was a fascinating journey through time beginning with some brickwork from the original Roman bridge and ending in a small souvenir shop displaying replicas of the pottery used by the old hospital which had only ceased to function as a hospital two years earlier. 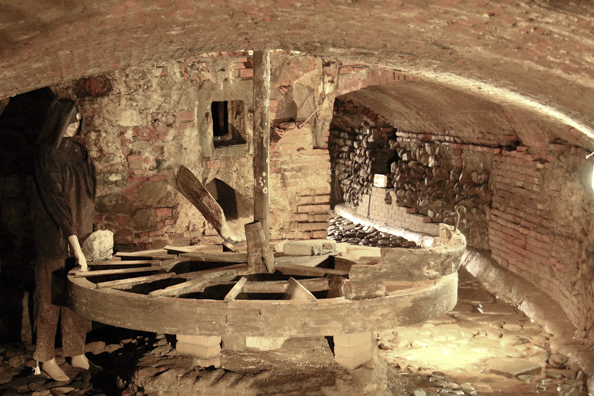 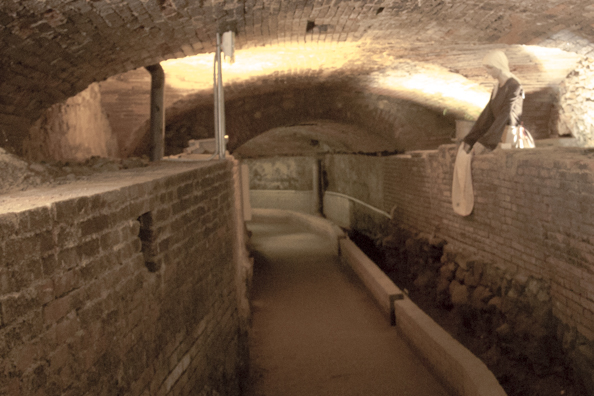 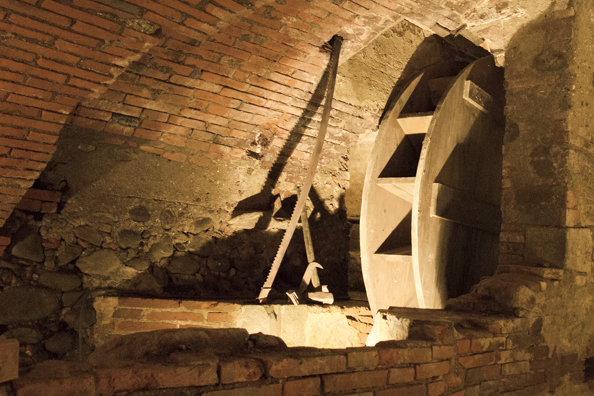 Originally these tunnels stretched from the old port of Pistoia to its defensive fort, Fortezza di Santa Barbara but only 650 metres have been opened up so far and I had to continue my journey to the fort above ground. To get to the entrance of the fort I had to cross the Piazza della Resistenza inside the Parco Pubblico which is currently undergoing major re-planting with an impressive collection of flowers and shrubs. I lingered for a while by the ornamental lake and watched the antics of the grey herons nesting in the tops of the trees above me – alerted to their presence by squawking and beating of wings every time one of them came into land. 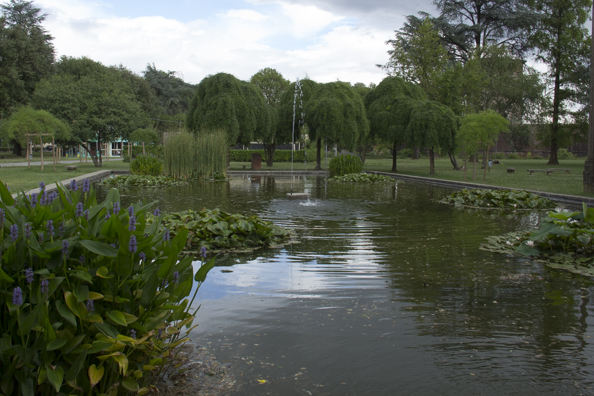 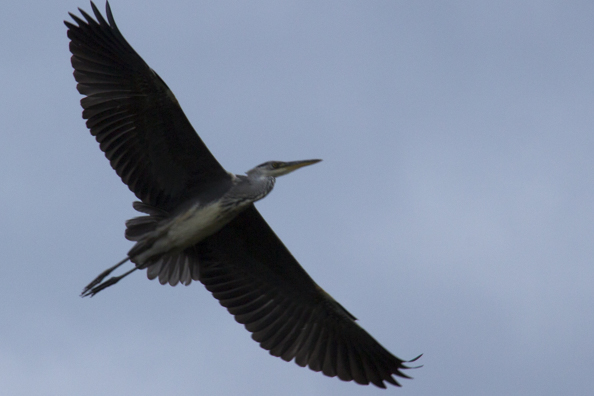 When I arrived at the entrance to the fort I was disappointed to discover that it was closed due to renovation. Renovations that had started in the 1980s! In 1539 Cosimo Medici initiated the construction of this rather grand fortress close to the walls of Pistoia and surrounded by a moat. It withstood one siege in 1643 after which it began a slow decline and it was disarmed in 1774 and was subsequently used as a barracks and a military prison. Now the gates are padlocked and its deserted tower tantalises the visitor behind an impenetrable barrier of city walls. 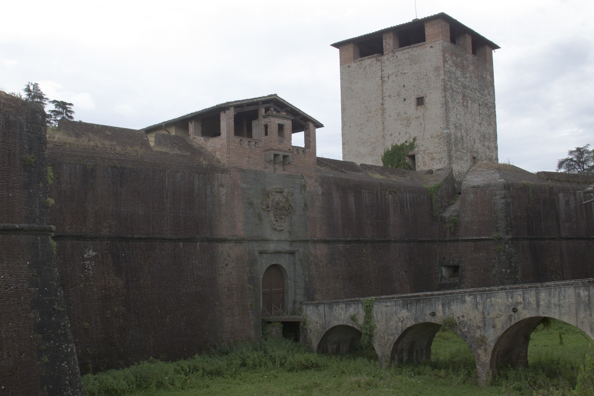