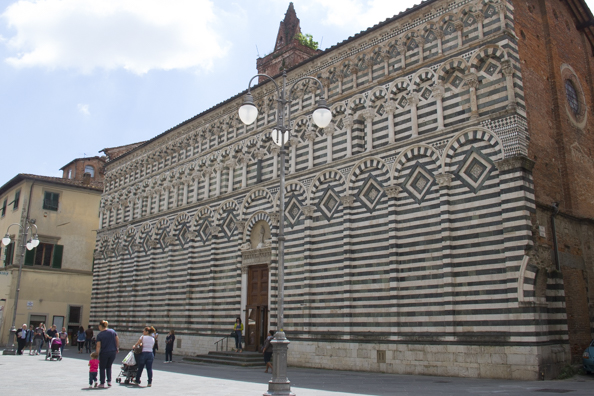 It was not, it was the Chiesa di San Giovanni Fuorcivitas so-called because when its construction began it was outside the city walls. I went inside to have a look around and found a comparatively simple interior splashed with pools of sunlight one of which lit up a pretty white font. 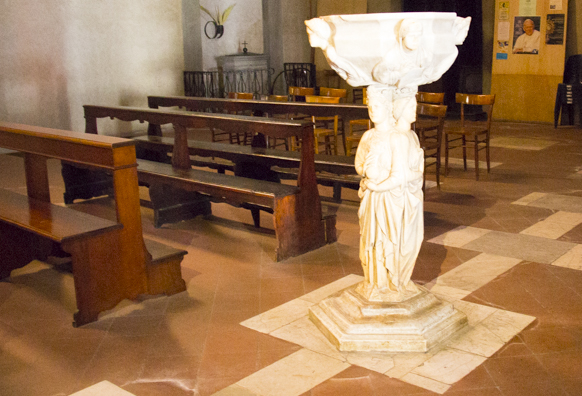 After some speculation regarding how the priest could get up into the elaborate pulpit of Fra ‘Guglielmo da Pisa, I left. 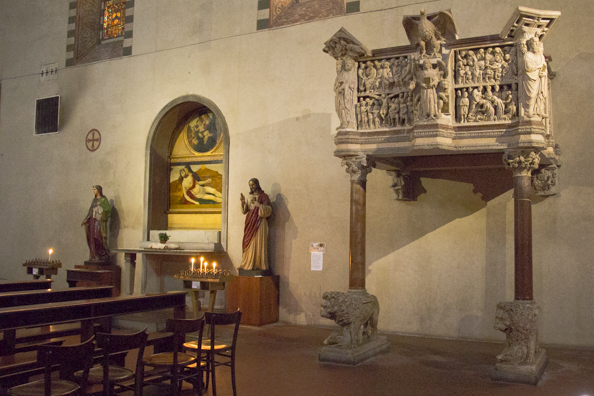 I found some fruit and vegetable stalls of the daily market in the Piazza della Sala which has been its home since time immemorial. I had to stop to admire the mounds of luscious fruit. 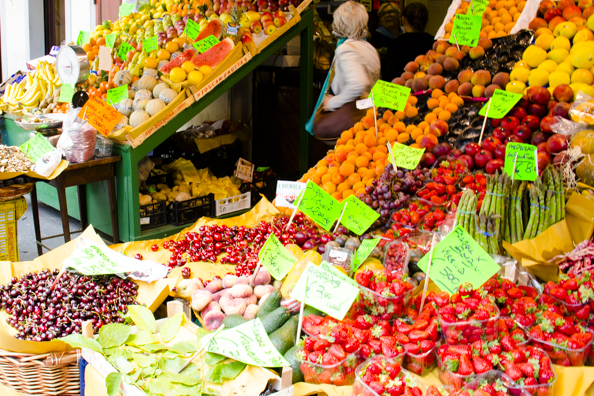 And the beautiful blooms spread across the cobbles. 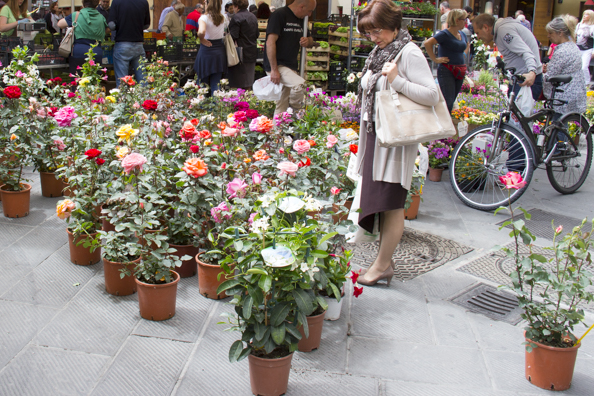 Entering the Piazza del Duomo I knew I had found the treasures I had been seeking as I was surrounded by some architectural gems. These included the duomo di San Zeno (cathedral) itself. It was built during the twelfth and thirteenth centuries on the site of a fifth-century church but its facade, with its seven-arched portico and three doorways, was not completed until 1311. The Carello di San Cappella di San Iácopo, accessed from the south aisle, is adorned with a silver masterpiece created over two centuries and displaying a succession of different styles from Early Gothic to Renaissance. 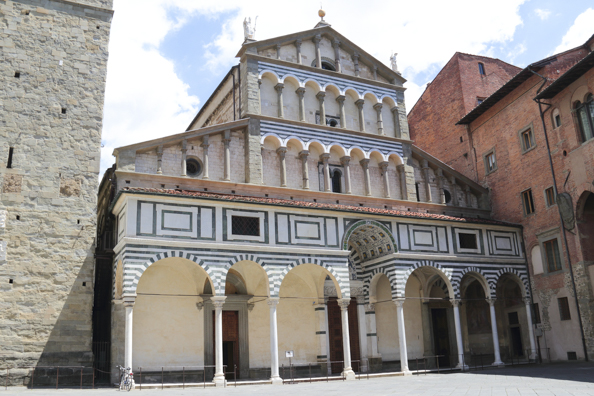 The sacristy of the cathedral leads into the Museo Capitolare (Cathedral Treasury) which was so full of riches that it is referred to by Dante in his Divine Comedy. Exhibits include the reliquaries of San Zeno and San Giacomo. 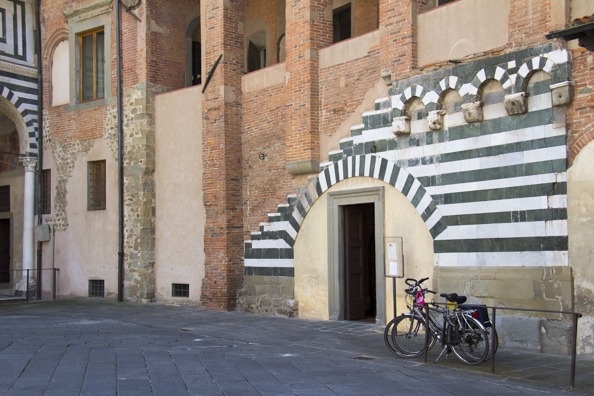 To the left of the cathedral is the campanile or bell tower which is sixty seven meters high and it is thought that the base may have been a Lombardian watch-tower. 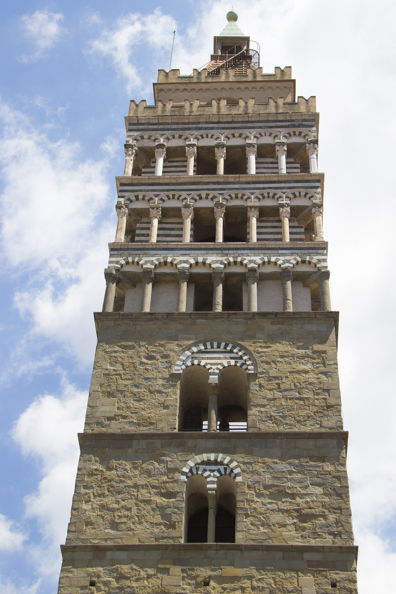 After appreciating the elegance of the Battistero di San Giovanni in Conte an octagonal gothic and especially its exquisite exterior of alternating bands of white and green marble it seemed appropriate to take a break at a café in the square to absorb my extraordinary surroundings. 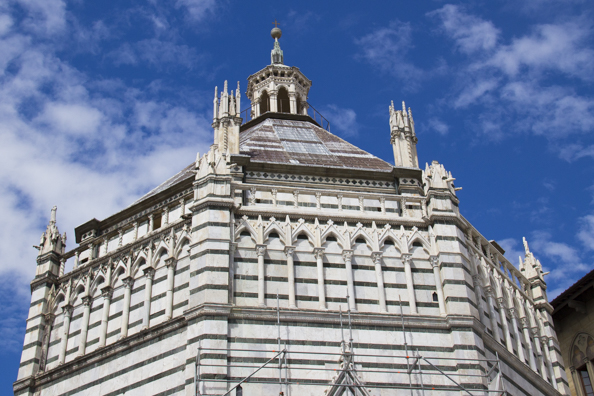 I had collected some information from the tourist information office which I thought may answer the question why such a small town was so rich in architectural treasures, particularly one that has for centuries was dominated by its neighbour and rival, Florence. Certainly over the centuries it has attracted a wealth of artists and architects and was, and still is, a flourishing centre for artisans. I had seen some stalls in the square that did not appear to be part of the market and my literature on the town informed me that they were part of an annual and unique anthropology festival Dialoghi sull’uomo. Pistoia also features other interesting festivals such as the Giostra dell’Orso -events/giostra-dell-orso.html which is held every year on 25 July. Twelve horsemen, three for each of the four districts of Pistoia compete against each other to win the “palio” (banner) by being the first to knocking down a bear shaped target using a lance. The winning horseman is awarded the “Sperone d’Oro” (Golden Spur). The Pistoia Blues has been held in Pistoia since 1980 and today it is one of the most important Blues music events in Italy and in Europe. Three days of top quality music fill the streets of the town centre. I also found a reference to a museum in the Palazzo del Comune the Museo Civico or Civic Museum. From the outside the building looked ordinary compared to its neighbours but the interior housed a real treat. 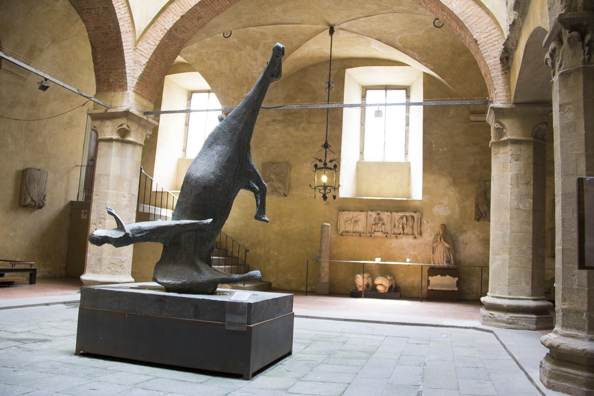 I spent a long time exploring all three floors which house an important collection of art work taking the visitor on an interesting journey through seven centuries of the artistic history of Pistoia. The exhibits were either donated or bought from churches and convents in the region. It was an amazing experience being able to wander at will amongst the precious exhibits and get close enough to the paintings to be able to examine the textures. 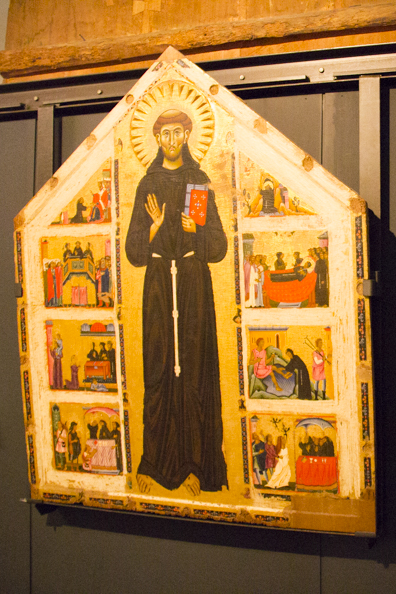 When I eventually left the museum it was time to return to my hotel and I decided to take a different route to the station and wound my way through the back streets admiring churches and towers on my way. I was glad I had taken this route as I came across the Chiesa di San Paolo with beautiful frescoes on its exterior. 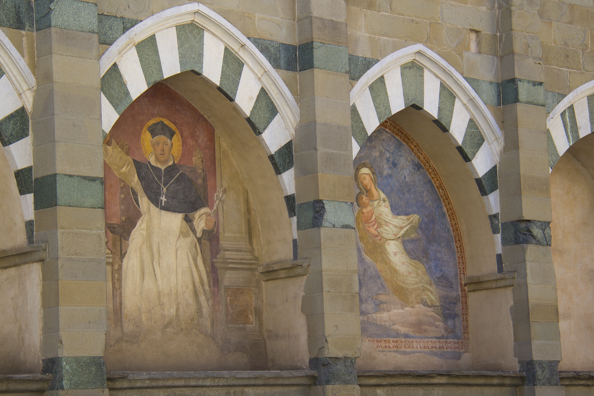