Siena Beyond the Palio

The Palio may be the jewel in the crown of Siena but this town has other gems worthy of consideration and in particular the old hospital of Santa Maria della Scala. Situated in the Piazza del Duomo and dwarfed by its elegant neighbour, the cathedral, I was so fascinated by its history that I decided to give it priority. 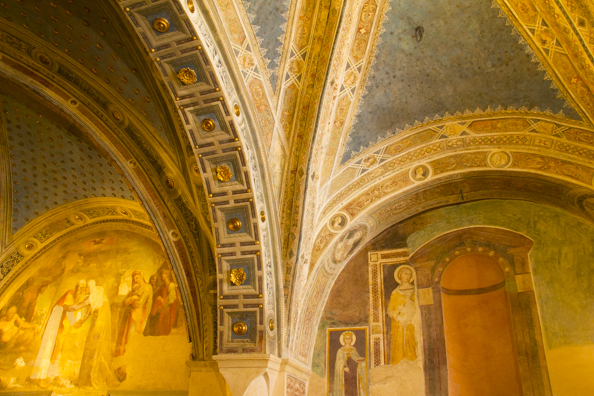 The building operated as a hospital for over one thousand years and it was not just the first hospital to be built in Tuscany but one of the first hospitals to be established in Europe. Set up on the Via Francigena or Pilgrim’s Way from Santiago de Compostela in Spain to Rome its initial purpose was to care for sick pilgrims who passed through the city, to look after the poor and to provide for abandoned children. It was the latter purpose that had sparked my interest. The hospital once had a door for the reception of foundlings. The baby would be placed in the cradle on the door and then the bell would be rung and the door would be swung round to collect the baby. All the foundlings were given the same surname, della Scala, and in just one year 300 children were given this surname. Scala means ladder or steps but it also means a stretcher which was significant as the building was also a hospital. However, reputedly, the hospital took its name from the steps of the cathedral opposite. The hospital looked after these foundlings, paid for their education and provided a dowry when they got married – all funded by donations and bequests from wealthy citizens of Siena. Established during the eleventh century by the canons of the cathedral and initially under their management the hospital later became the responsibility of the friars of the hospital and then in the fifteenth century it came under the direct control of the municipality of Siena. 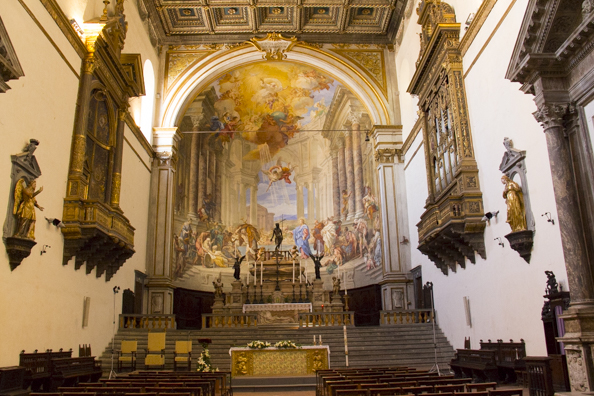 Image
When the hospital finally closed its doors in 1990 some amazing works of art were discovered that had once decorated its interior so it was decided to restore it to its original glory. Beautiful frescoes portraying the many different aspects of the hospital commissioned by its patrons have been restored and the whole building has been turned into a museum occupying four floors, two of which are underground. This museum easily sits alongside the two other most important cultural sites of Siena, the Duomo (cathedral) and the Palazzo Pubblico (municipal building) and having devoted nearly two hours to the hospital it was time to move on to the Duomo. 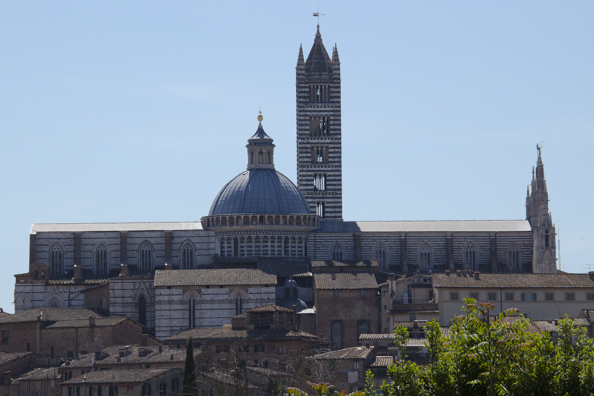 Rivalry was the spur for the construction of Siena’s beautiful cathedral – a desire to be better than its arch enemy, Florence. Inspired by the size of their rival’s cathedral the Sienese tried to enlarge the existing building but were thwarted by the soft ground beneath the proposed extension and the lack of labour due to the plague. To compensate for this failure they concentrated on the external and internal decoration of the cathedral and now golden triangular mosaics on its façade fashioned from Murano glass glitter in the sunlight and intricate works of art on the floor, walls and ceilings of the interior provoke involuntary gasps of admiration. 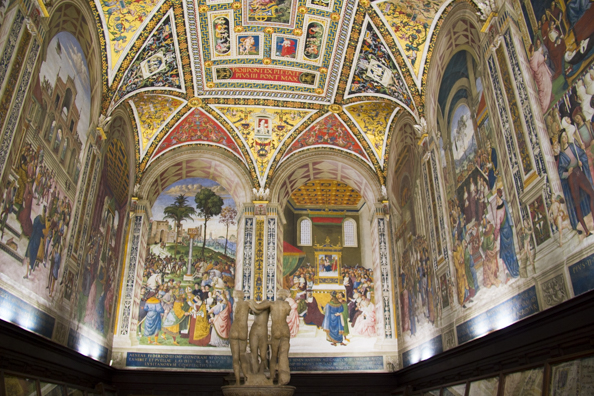 Visitors can climb up to the abandoned façade for good views over the city and surrounding countryside – panorama dal facciatone. I had invested in the composite ticket that gave me access to five sites around the Piazza Duomo (Cathedral Square) and had started with the cathedral before making my way into the museum which is housed in the unfinished nave. Expecting I would have to queue to view the panorama dal facciatone I walked briskly through the museum glancing at a few of the many interesting exhibits and made my way to the second floor where I found the queue to climb up onto the top of the unfinished nave. Groups of twenty- eight visitors are taken up the long narrow staircase to the top of building and the next group has to wait until the previous group gets back as there is not enough room for people to pass on the spiral staircase. It was an amazing experience. When I came back down I visited the battistero and then the crypt. 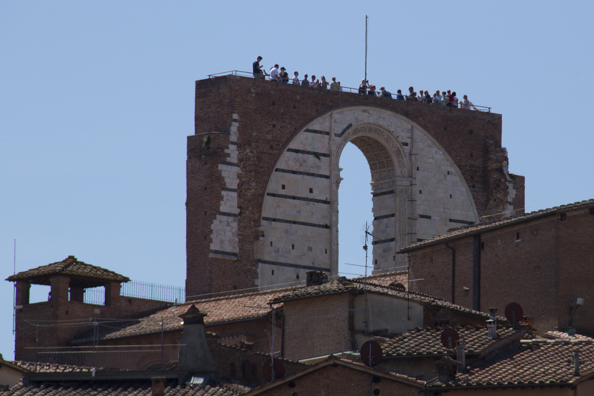 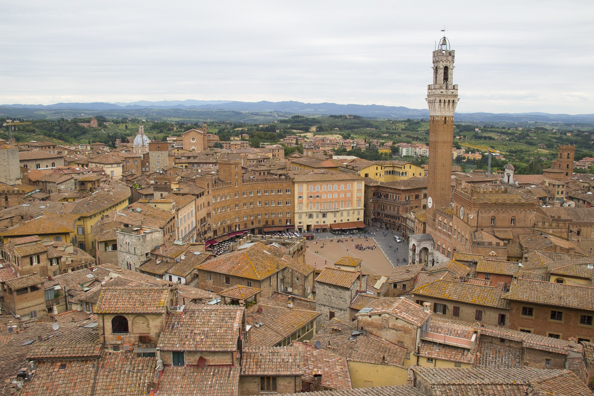 Piazza del Campo or il Campo is famous as the venue for the Palio but it is also the home of the Palazzo Pubblico, the Torre del Mangia and the Fonte Gaia (fountain of joy). Refreshed after a delicious lunch of carpaccio of pear with pecorino, walnuts and green leaves dribbled with honey Osteria del Gusto I was ready to face the challenge of another climb to view the city from above. Tickets are for timed entry and as I had to wait a while I decided to explore the Palazzo Pubblico first. The palazzo is huge with several floors and some good views of Siena from its terrace. I did not have time to complete my tour before I had to descend and make my way to the bottom of the tower which is on the ground floor of the Palazzo. Once we had all gathered together we followed our guide up several flights of steps where we had to show our ticket. Anyone without a ticket or trying to get in before their time was due had to go back down again – whatever their tale of woe. There are lockers at this entrance as visitors are not allowed to take any bags with them – just a camera and a mobile. Thereafter the steps are steep and narrow but there is room at the corners for people to pass. There are twenty flights of steps and a viewing platform two-thirds of the way up. It was worth the climb to the very top although you cannot see the whole of il Campo below. Torre del Mangia (1325- 1349) derives its quaint name from the large salary of the first bell-ringer Giovanni di Duccio alias “Mangiaguadagni” (money-eater). When he died the Sienese replaced him with a wooden automaton and later with a metal one and then finally one made of travertine. The remains of the latter can be seen in the Cortile del Podestà inside Palazzo Pubblico. 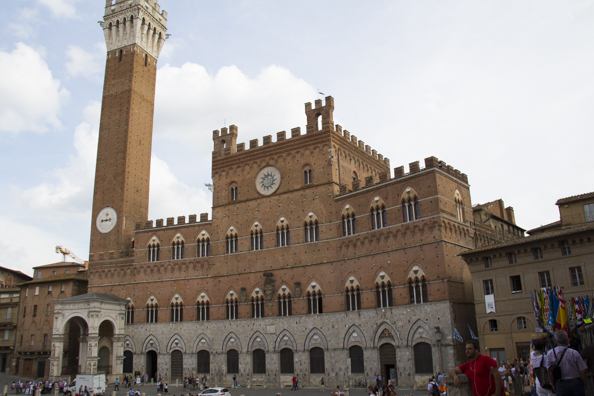 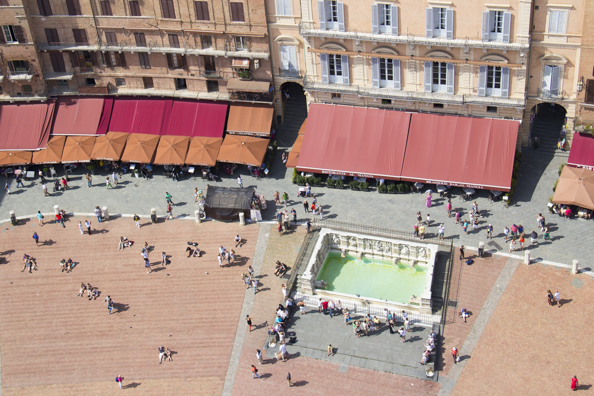 Back in the piazza I did a circuit of the shell-shaped open space to the Fonte Gaia and spent some time taking photographs of pigeons balancing on the sculptures surrounding the pool in the middle as they tried to drink from the spurts of water. The original Fonte Gaia fountain was designed by Jacopo della Quercia around 1419 but has since been replaced by a magnificent replica. The central figure in the back section of the fountain is a Madonna and Child, surrounded by allegories of the Virtues. The water feeding the fountain travels through twenty-five kilometres of underground passages built during the Middle Ages to bring water to a city devoid of any surface water. It was christened Fonte Gaia due to the great celebrations that took place when the water first gushed out of the fountain. 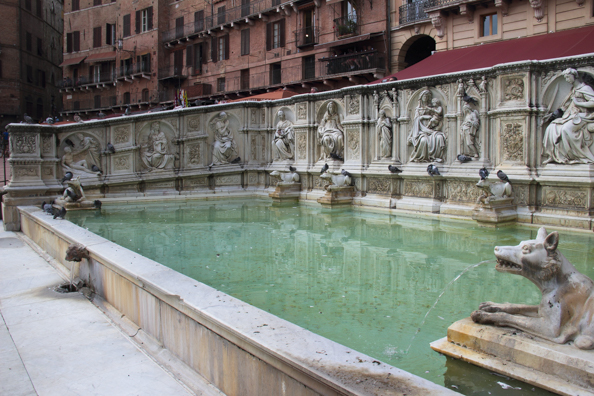 Hot and tired I wanted to find somewhere shady to sit for a while. From my vantage point at the top of the Torre del Mangia I had seen trees on the top of a section of the old city walls so I made my way onto the walls and sat for a while on a bench under the trees that form an avenue around the walls. A pleasant recreational area it also affords good views across the city to its iconic cathedral. 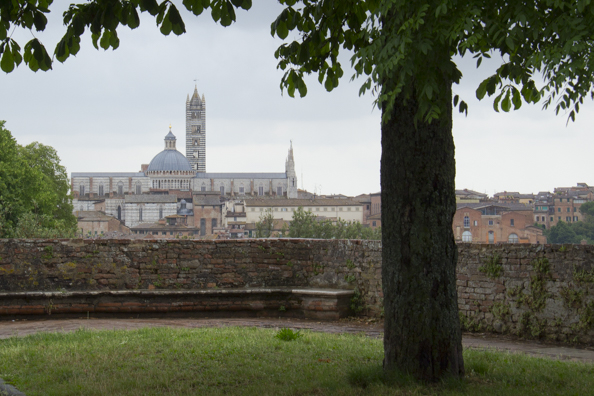 By the time I got back to the meeting point, the Basilica di Santa Caterina in Domenico, it was now practically empty after the rush of visitors arriving in the city earlier in the day. The curator was enjoying a rest after spending hours scurrying around ensuring all visitors were properly dressed, did not talk too loudly and did not take any photographs. This large basilica was built by the Domenicans and its most famous member was the learned Santa Caterina whose relics are housed there – her right thumb and the famous sacred head. 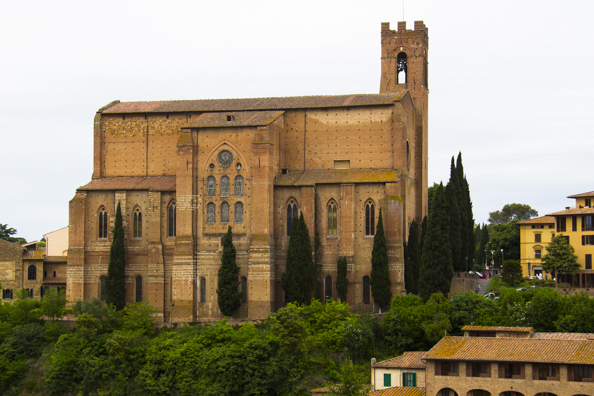 There was just time to pop into a delicatessen to sample some of the lovely sweet biscuits for which Tuscany is famous before making our way back to the coach park. A sweet ending to a lovely day. 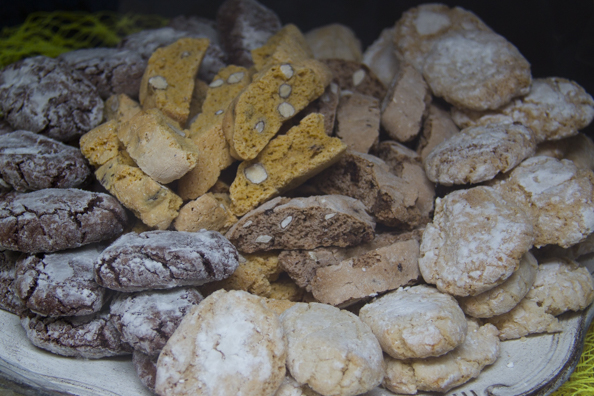 **************************************************************
Getting there
I have visited Tuscany and Lucca several times on trips organised by Solos Holidays. We flew to Pisa with British Airways that operates flights from London Gatwick and London Heathrow. We were based in Hotel Biondi (http://www.montecatinihotelbiondi.it/) in Montecatini Terme (http://www.turismo.intoscana.it/allthingstuscany/aroundtuscany/montecatini-terme-what-to-see-and-do). This town is ideal for exploring Tuscany but there is no direct train or public bus to Siena. Siena does have a train station but it is a long way from the town. There are buses from Florence otherwise an organised excursion or hiring a car would be the best way to visit the town.