Siena and the Palio

The Palio is essential to the life of the Contrade. The Contrade in turn are essential to the life of Siena. The Palio, the Contrade, and Siena thus constitute a virtually interdependent trinity – a quote from the historian Judith Hook.
It was not long after our arrival in Siena in Tuscany before we plunged into the history of the Palio. We had turned down a side street that was festooned with flags and then stopped outside a very innocuous building. It was the chapel of the Contrada di Civetta or owl. Their horse would enter this chapel to be blessed before running in the Palio. 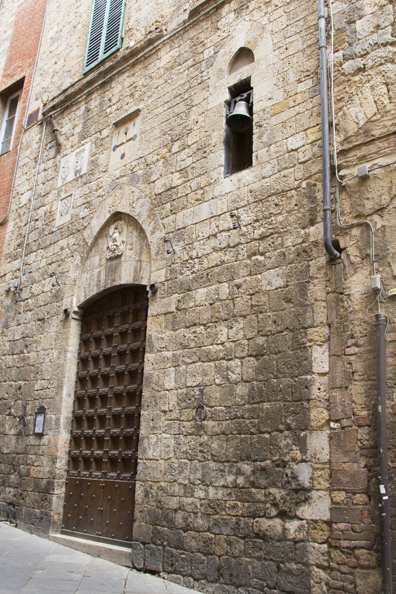 A short distance further down this street we turned into the small courtyard that was the ‘home’ of the contrada. In the middle of it was a pillar with an owl perched on the top. It took a while to convince me that it was an owl as it was so weather beaten it was difficult to tell what it was. Infants born in this contrada are blessed by this column – a tradition that had clearly been followed for hundreds of years. 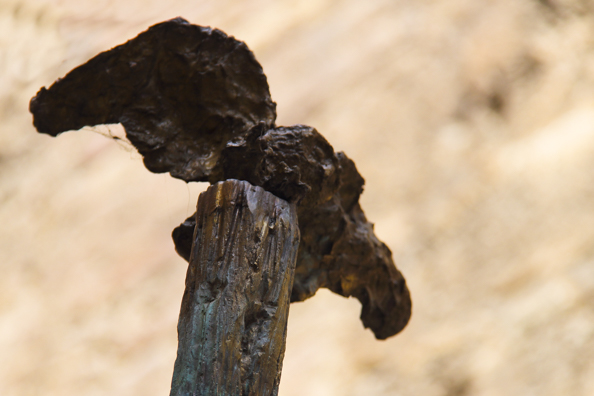 In the far corner of the courtyard was the stable where the horse that was running for contrada would be stabled just before the race. The horses that run in the Palio do not belong to the contrada but they are supplied by local breeders and allocated to the ten contrade competing in the race by lottery. The selection of the ten contrade out of seventeen is also done by lottery. Every contrada has its own chapel, stable, administrative buildings and traditions and some have their own website. 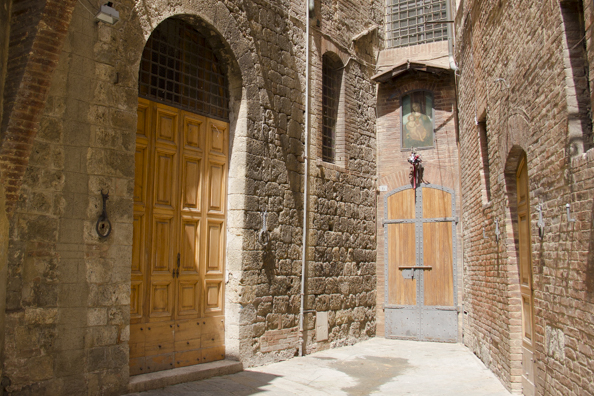 As we emerged onto the street we were delighted to see one of the contradaioli as the inhabitants of each Contrada are called. He was wearing the colours of the owl, black and red with white bands, and carrying its flag of the same colours and a picture of an owl. There is a display of these flags in the museum in the Ospedale della Santa Maria della Scala 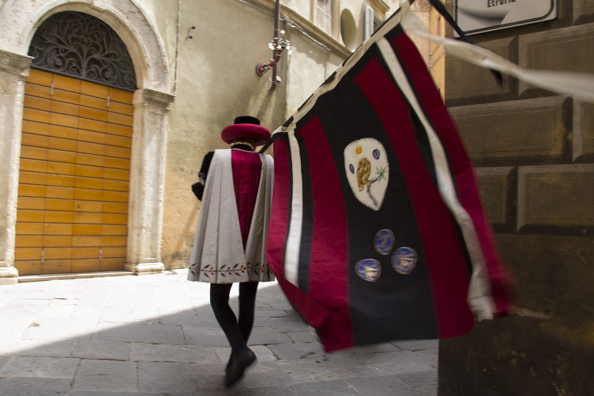 The Contrade first appeared during the fifteenth century. Created to organise the celebration of religious festivals they were represented by wooden replicas of animals such as a giraffe, a dragon, a porcupine, a she-wolf, a caterpillar, a goose and so forth made by the young people of the district they represented. The contrade adopted the name of the animal (real or fictitious) that represented them. It was not long before these associations began to organise their own events and games including horse races. These often took place in Italian cities to celebrate important religious and civil festivals. In Siena of all these games the only one to survive is the Palio and of the original fifty-nine contrade only seventeen survive. Each is based in its own district whose boundaries are marked by ceramic tiles on the wall of the last building in that area and many have decorative street lamps attached to the walls of the buildings within their district. 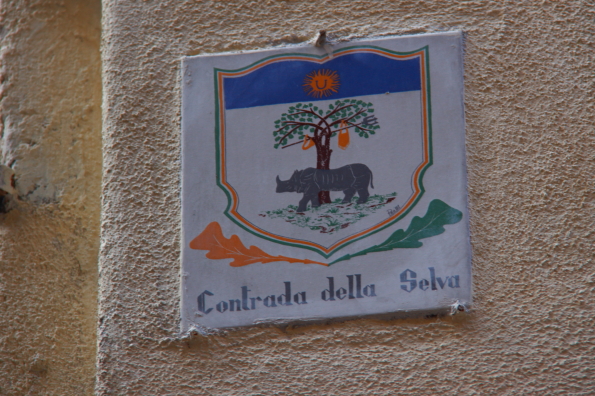 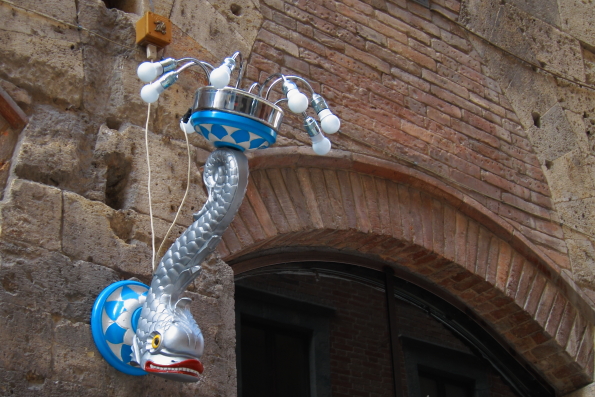 Flags and decorative street lamps are also a common sight and the streets of the most recent victor will be festooned with them as part of the celebrations which will continue until the next race in twelve months’ time. 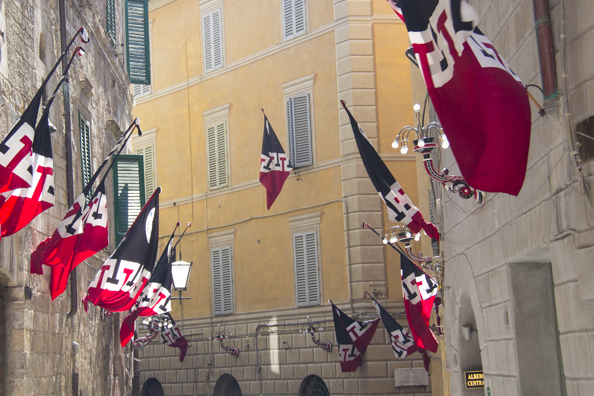 The race is run in the Piazza del Campo in the centre of the old town of Siena and ideal venue due to its semi-circular shape that slopes down to the straight edge where the Palazzo Pubblico is situated. Preparations start at least three weeks before the event when sturdy fences are erected on either side of the track that encircles the piazza and the spectators who stand in its centre. Several layers of sand are spread on this track and mattresses attached to the buildings at the two sharp corners protect wayward horses and falling jockeys – the jockeys ride bareback. Seating is erected around the outside of the track and the balconies around the piazza will be overflowing and people will be perched on the roof tops. 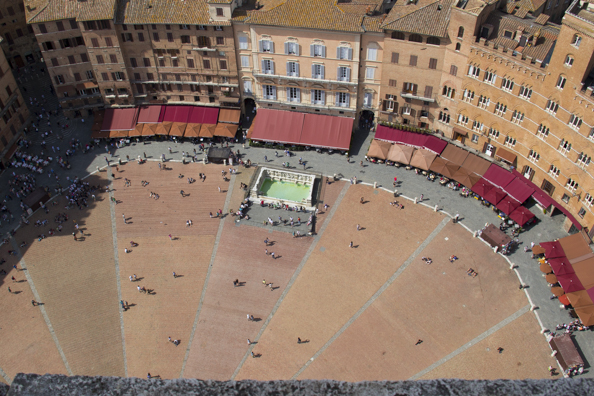 The Palio is run twice a year on the second of July and the sixteenth of August and generates huge rivalry between the contrade but only ten of them can compete and a ceremony is held in the Piazza del Campo to randomly select those who will compete. The race is a religious event and in July it is run is to celebrate their deliverance of the city from the Florentines after its citizens prayed to the Virgin Mary and this race is known as the Palio di Provenzano in honour of the Madonna di Provenzano who has a church in Siena. The second race celebrates the Assumption, the Palio dell’Assunta. Before the race the contrade parade in brightly coloured medieval costumes and displays of flag throwing take place. The build up to the event lasts a lot longer than the race itself as the three circuits of the piazza takes just ninety seconds after which the contrade with the winning horse – rider-less horses can win the event – is presented with the prize – a hand painted silk banner or pallium. The flavour of this event is captured by photos around the city. 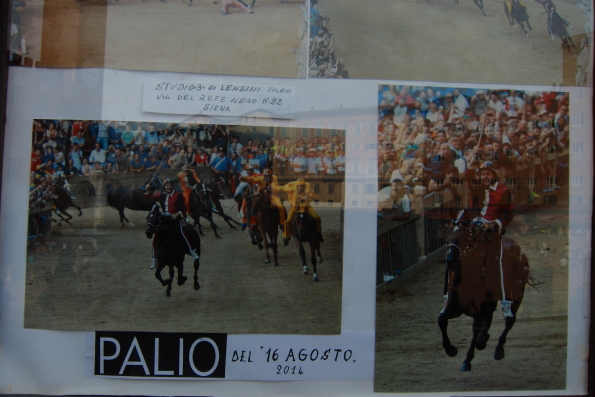 The Sienese have a complex relationship with the Palio jockeys (‘fantini’). As the jockey is crucial for success in the Palio the contrade captains work hard to develop a relationship with them yet at the same time they consider them to be mercenaries as many of them come from outside Siena and therefore have no loyalty to a particular contrada. For this reason they are referred to locally as i dieci assassini or the ten assassins. They are well paid – around €300,000 for a race that lasts just 90 seconds. The race may be short but the preparations and celebrations last all year. 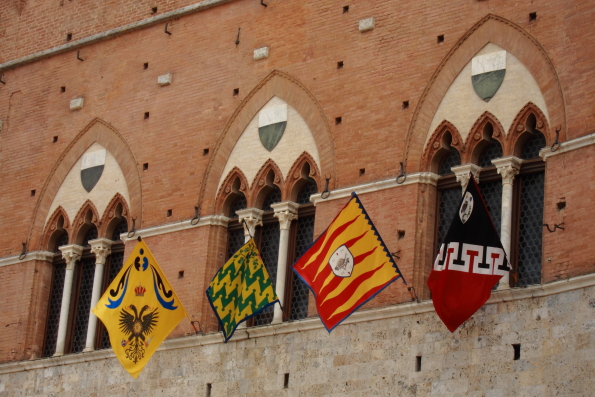 The first Palio of this year has already been run but I would love to see the next one – in comfort of course – from a balcony in the Piazza del Campo enjoying a glass of Prosecco. Any offers?
**************************************************************
Getting there
I have visited Tuscany and Siena several times on trips organised by Solos Holidays. We flew to Pisa with British Airways that operates flights from London Gatwick and London Heathrow. We were based in Hotel Biondi (http://www.montecatinihotelbiondi.it/) in Montecatini Terme (http://www.turismo.intoscana.it/allthingstuscany/aroundtuscany/montecatini-terme-what-to-see-and-do). This town is ideal for exploring Tuscany but there is no direct train or public bus to Siena. Siena does have a train station but it is a long way from the town. There are buses from Florence otherwise an organised excursion or hiring a car would be the best way to visit the town.