Within the Walls of Lucca

Where to start? There was so much to see. We decided that while we still had the energy we would climb the Guinigi Tower one of the few remaining tower houses in Lucca. 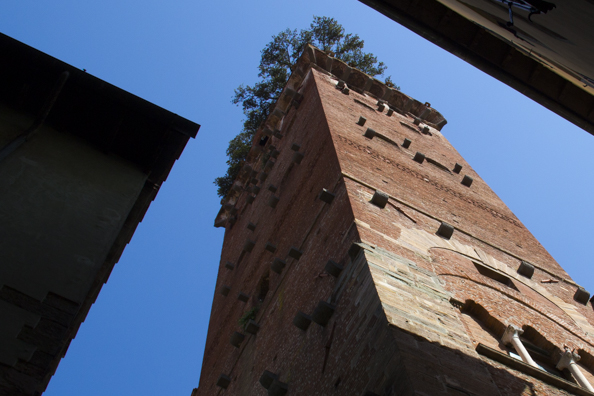 The view from the top was stunning and we were grateful for the shade from the trees that surrounded us and the cool breeze that wafted through them. It is unusual to find trees growing on top of a tower and one theory for their presence is that it was a means of overcoming a law that private towers should not be higher than public towers. 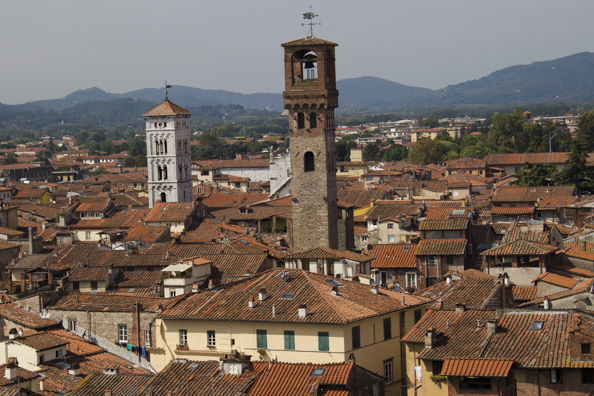 We spotted another tower from our vantage point and decided we would take on that challenge. The Torre delle Ore or the Clock Tower is taller and narrower than the Guigini Tower and occasionally we had to stop and flatten ourselves against the side to let people coming down pass by. 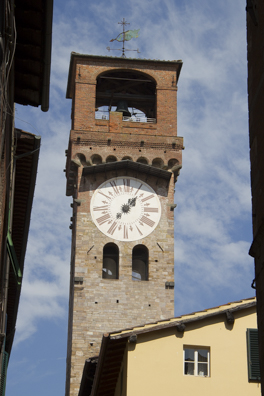 At the top we found some bells and a good view of the Guinigi Tower surrounded by the palazzi of the powerful Guinigi family that once ruled Lucca. 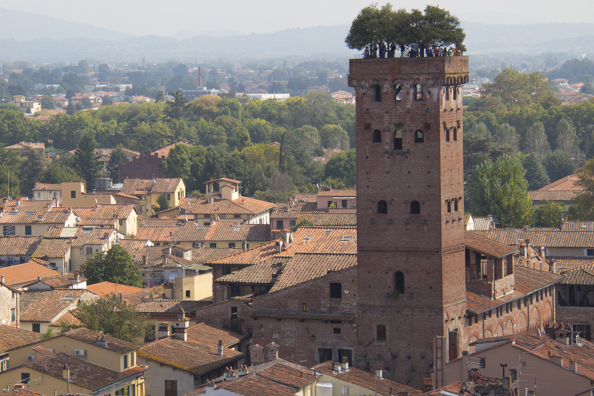 This tower is the only medieval tower that has survived and it seems this survival is due to the fact it was a clock tower and kept time for the citizens of the time by tolling its bells. 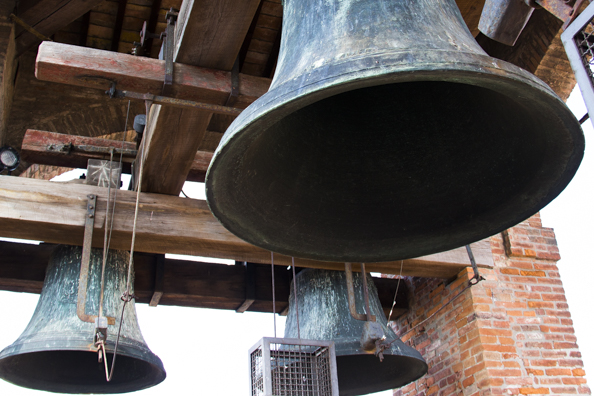 It was in this tower where we first came across one of the legends surrounding a wealthy and beautiful inhabitant, Lucida Mansi, who was so proud of her flawless face she sold her soul to the devil to preserve them. When the devil arrived to collect his dues she failed in a desperate attempt to climb up to the clock face to turn back time. Emerging from the tower we realised we were on the famous shopping street of the town, Via Fillungo, and decided that we had time to stroll along it but not for any serious shopping although the old-fashioned exteriors of some of the shops were very inviting. 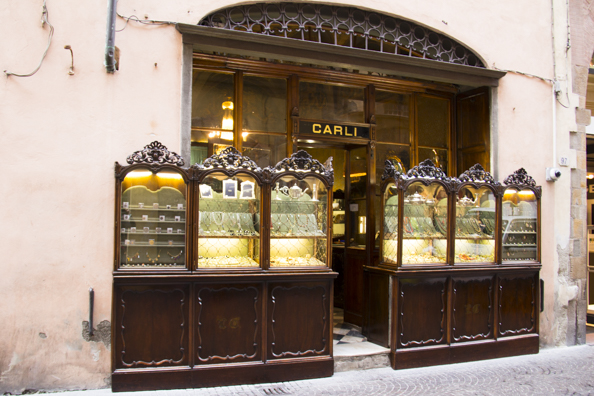 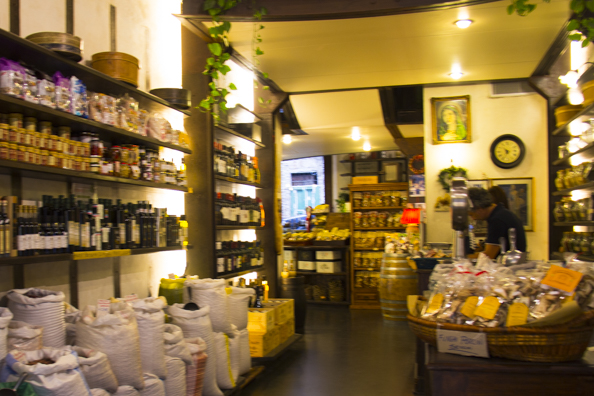 Our meandering led us into the Piazza dell’ Anfiteatro although all that remains of the original Roman anfiteatro is the shape and some bricks in the exterior walls. We paused here to enjoy a welcome rest and refreshment in one of the cafès that formed an inner ring in the circular piazza. 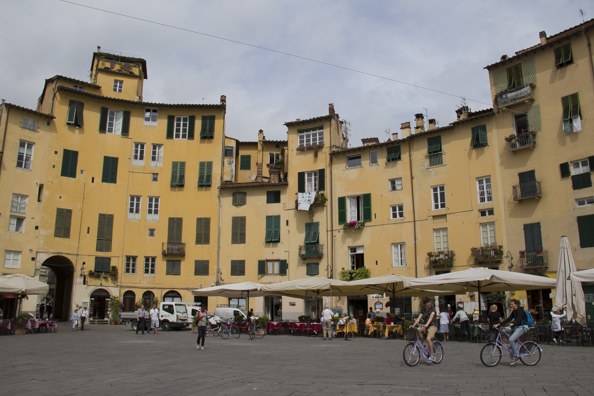 Continuing along via Fillungo which cuts right across the old town, we came upon a bronze statue of Lucca’s most famous son, the composer Giacomo Puccini (1858 to 1924), presiding over a lovely little square – Corte San Lorenzo. In the far corner of this square is the house where Puccini was born which is now a a museum dedicated to him. 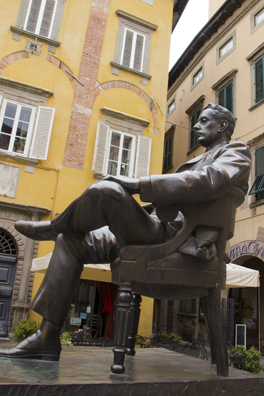 We were running out of time and although Lucca is famous for its many churches we had to be selective and started with the impressive Chiesa di San Michele. Its magnificent marble façade is a fine example of the Pisan Romanesque style. 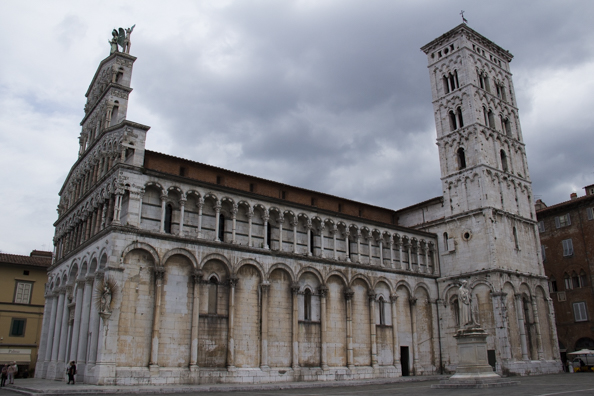 We moved on to the cathedral, Cattedrale di San Martino the west façade of the building is faced with white marble blocks striped with light grey marble with decorations in dark green marble. This decoration dates from the beginning of the thirteenth century. 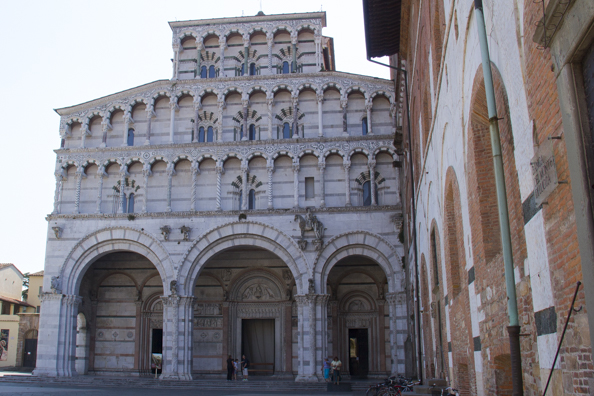 Once there were free-standing sculptures on the lower section
but now there is only one left – the large statue of Saint Martin on horseback sharing his cloak with a beggar. The statue on the façade is a replica but the original can be seen inside the cathedral. 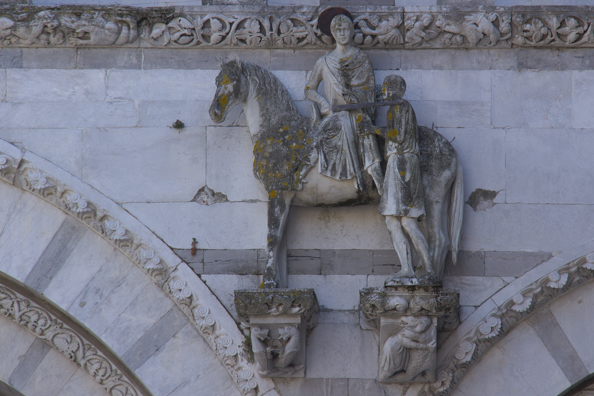 On the wall of the building adjacent to the cathedral we could see the bricked up archways where money lenders once plied their trade. 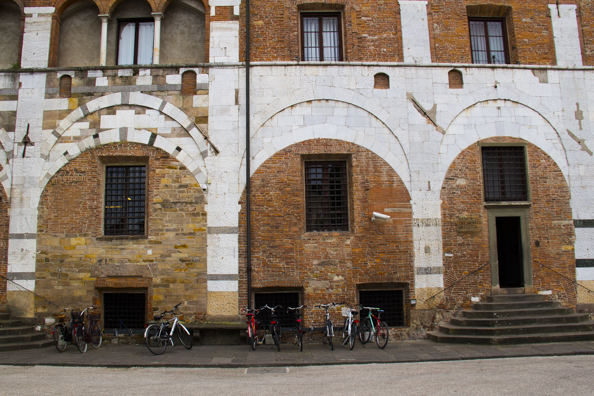 Our third and final church was the beautiful Basilica di San Frediano a medieval basilica whose attractions include a large bell tower, a thirteenth century mosaic on its façade, a Romanesque font and an impressive Renaissance fresco. 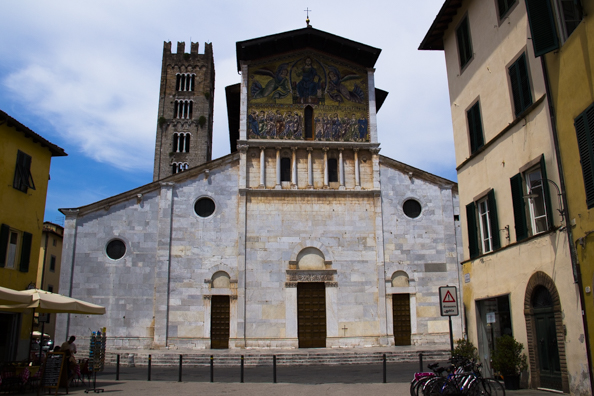 Close to this church is the Palazzo Pfanner, an imposing building with an impressive garden but we did not have time to explore its elegant interior and we had had the best view of the gardens when we walked past it on the walls. 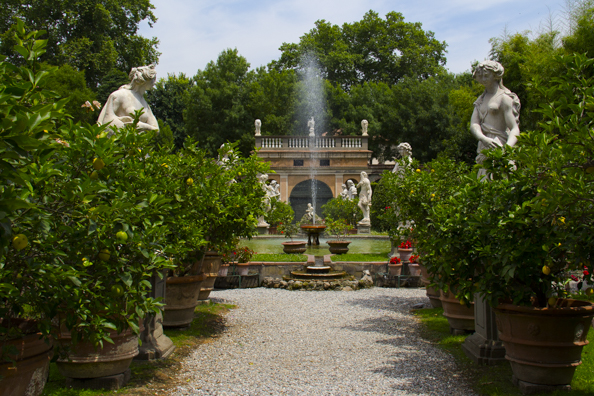 Just behind this church we climbed back onto the walls to walk round to the Orto Botanico Comunale di Lucca or botanical gardens which we had viewed from the walls earlier and had decided then that we would like to return later to explore them properly. 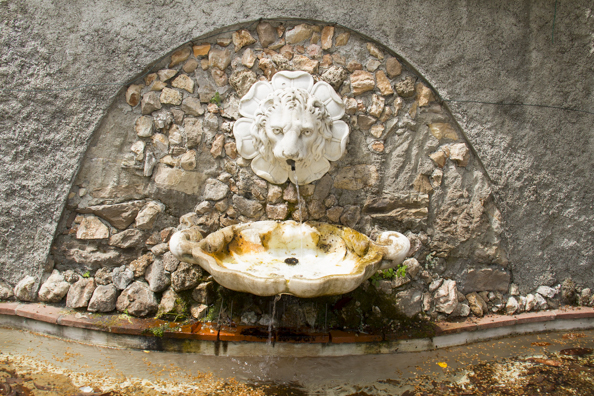 We were not disappointed and we spent a long time exploring the grounds and the greenhouses where we found a wide range of plants from cacti to exquisite orchids. Outside the rhododendrons were in bloom – brilliant splashes of colour against a background of evergreen trees. 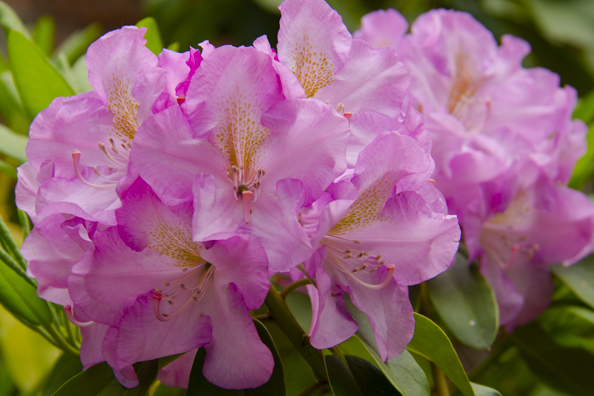 The large pond was a source of fascination for me as I scuttled around cooing at the terrapins some of which were tiny and difficult to spot as they lay sunning themselves on the water lily leaves. Large fish swam languidly beneath these leaves and two varieties of lilies bobbed above them. I would have stayed there much longer but my companions were anxious to move on. 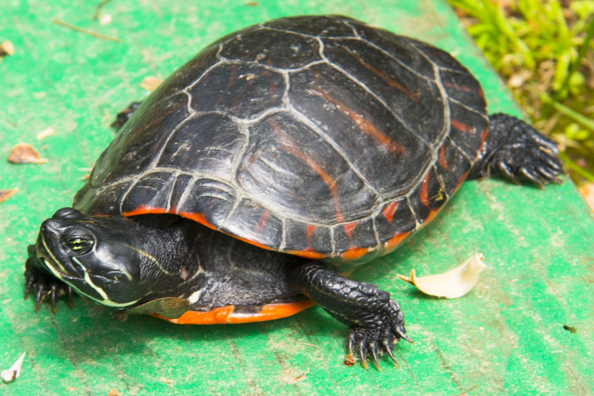 It was here we met Lucida Mansi again as another tale about her was recorded on a board by the water. The substance of this story was the same, a beautiful young woman who sold her sole to the devil in order to retain that beauty for thirty years but the tale of her demise differs. She was not caught on the steps of the Clock Tower trying to turn back time but she was But one summer afternoon, after 30 years, the devil came back to her. Lucida turned desperate and prayed to him to save her soul but the Devil lugged her on his flaming carriage and, after a full tour of the city walls to allow Lucca’s inhabitants to hear her harrowing screams he sank with his chariot in this pond, the wonderful gem of the Botanical Garden. Apparently anyone choosing to dive into the pond will see the face of Lucida Mansi sleeping in its depths. It is also claimed that every year on the last day of October just before midnight silence falls in the gardens and then a strong wind gets up, the noise of horses’ hooves resounds in the air and it is possible to see the flaming carriage sinking into the pond. Lucida actually died of the plague on 12 February 1649 and her remains were buried in the Lucca Capuchin friars’ church very close to the Botanical Gardens and later destroyed. To save time I took a photograph so I could read it later. We hurried along the tree-lined paths back to the entrance and back on to the walls which would take us directly to the Porta San Pietro and the station which was nearby. 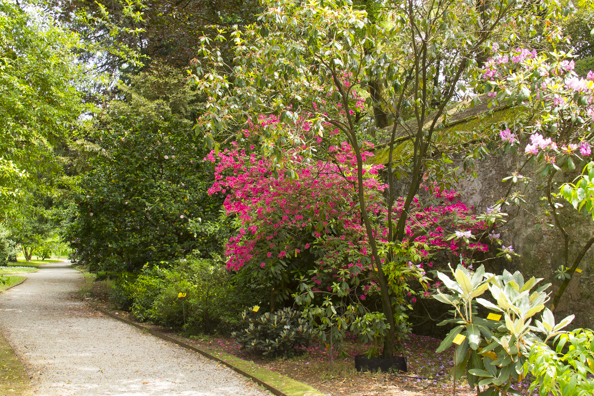 It had been a brilliant day and despite our best efforts we had not seen everything this little town has to offer – in particular the museums of which there are several …a good reason to come back, and soon.
*********************************************************************
Getting there
I have visited Tuscany and Lucca several times on trips organised by Solos Holidays. We flew to Pisa with British Airways that operates flights from London Gatwick and London Heathrow. We were based in Hotel Biondi (http://www.montecatinihotelbiondi.it/) in Montecatini Terme (http://www.turismo.intoscana.it/allthingstuscany/aroundtuscany/montecatini-terme-what-to-see-and-do). This town is ideal for exploring Tuscany as it is on the mainline between Florence and Viareggio with regular trains direct to Lucca.