Walking the Walls of Lucca

Lucca in Tuscany is one of my favourite cities because it has so much to offer. I can visit the many interesting attractions dispersed around the town, browse a wide range of shops, enjoy a leisurely coffee in one of its many piazze or walk around its walls. 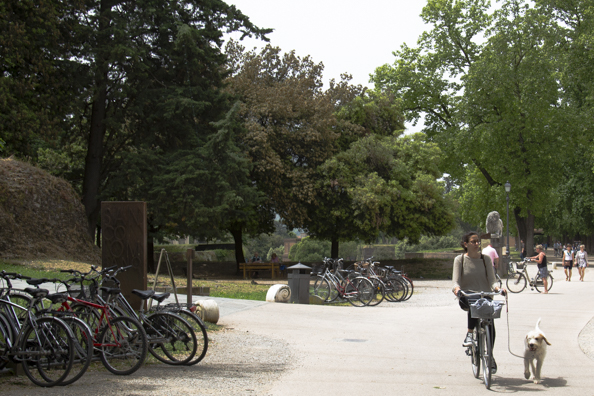 This city is one of the few cities in the world that has kept its Renaissance circle of walls intact – historic evidence of a small, proud city, then the capital of a Republic, standing firm against its more powerful neighbours and in particular Florence.The construction of the present walls began during the sixteenth century to cope with the rapid advances in warfare techniques that had rendered the medieval walls obsolete. This was the fourth stage in the construction of these walls. The first circle was the ancient Roman walls of which very little remains. During the eleventh and twelfth centuries construction of the first medieval walls began and they were completed in the thirteenth century and the third stage was the extension of these walls two centuries later to deal with an expanding population. The present walls are an excellent example of military science during the period in which they were built (1545 – 1650) and important military architects such as Jacopo Seghizza and Alessandro Resta were employed. The walls which are twelve metres high and stretch for over four kilometres are formed of eleven ramparts or bastions all of different shapes with different characteristics but their purpose was the same, to house the guards and protect a section of the wall. Before the new walls were begun a large area around their foundations was appropriated and the hamlets outside the ancient city walls were demolished and so were the churches of San Donato and San Pietro. 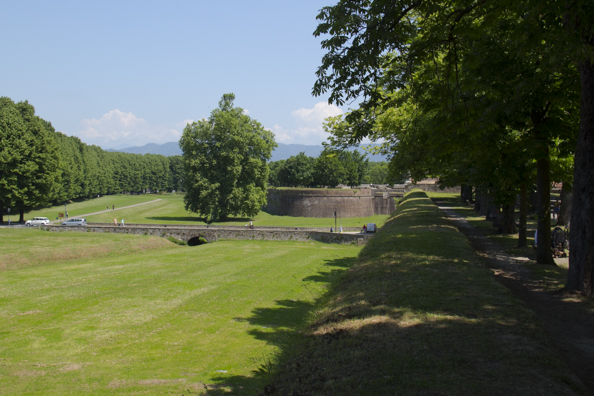 Despite the great cost to the city in terms of money and effort the new walls were an instant success with the inhabitants of Lucca, the Lucchese. These walls protected the city but also provided a tree-lined promenade with lovely views of the city and the countryside around it. Trees were planted on the top of them to stabilise the earth within the brick walls and four species were used in succession – plane, lime, ilex and chestnut. It was originally intended that the nobility would be the only ones to enjoy this bonus but despite many warnings against trespassing in what was a military zone the walls soon became a popular place for a walk, meeting friends or relaxing on the bastions. The walls never had to withstand a siege and in the nineteenth century Duchess Maria Luisa of Bourbon had them converted into a public walkway. 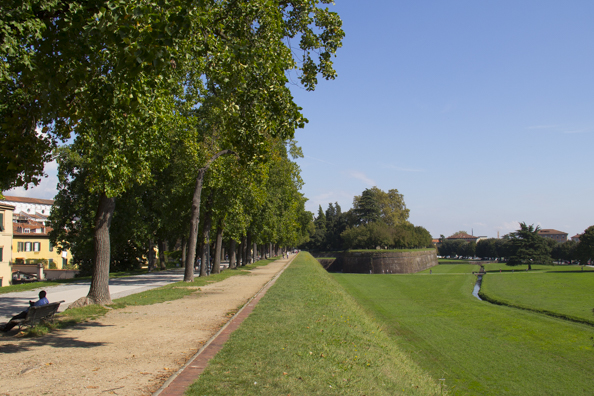 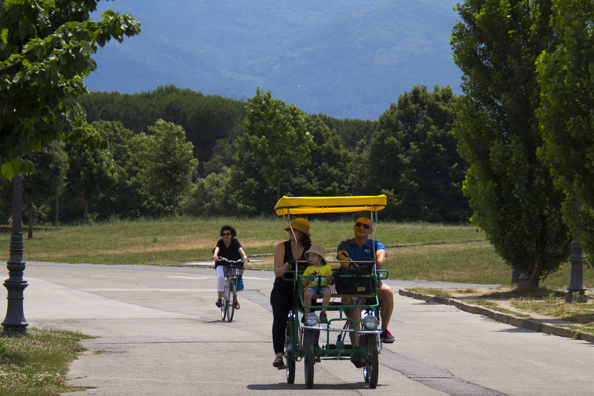 Information boards provide a history of the walls and the eleven bastions that are linked by them. These bastions were never used for defensive purposes and have been allowed to deteriorate. Public drinking fountains offer regular refreshment and avoid the need to carry large supplies of water in the heat of the summer. For those who want to sit and relax in the shade there are plenty of opportunities and for the children there are play areas on the grassy areas around the old bastions. 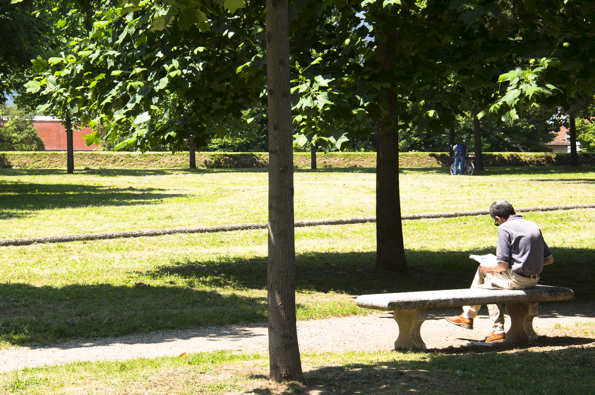 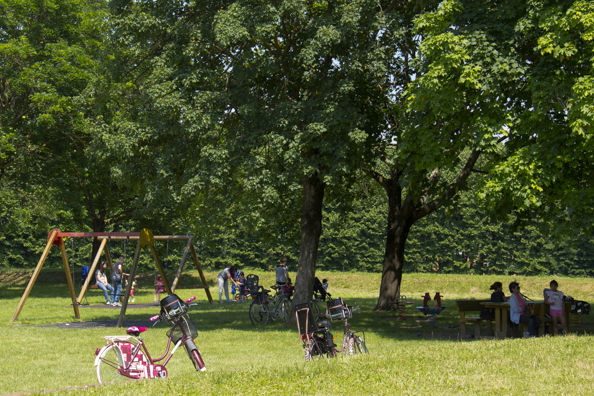 I started my circuit at Porta San Pietro one of seven gates that now penetrate the walls. Originally there were just two fortified gates that allowed access to the city each equipped with a drawbridge, floodgate and iron double doors. Today there are seven gates in the walls all constructed in completely different eras but all equally splendid. The oldest gates in the original circle of walls are the Porta dei Santi Gervasio and Protasio and la Porta dei Borghi. Three other gates were added when the present walls were built – Porta San Pietro, Porta Santa Maria, and Porta San Donato, the most recent of all the gates. Once the threat of military attack had gone some new gates were added. Porta Elisa was built in neoclassical style in 1809 and two others were added at the beginning of the twentieth century – Porta Vittorio Emanuele (1911), and Porta San Jacopo (1930). 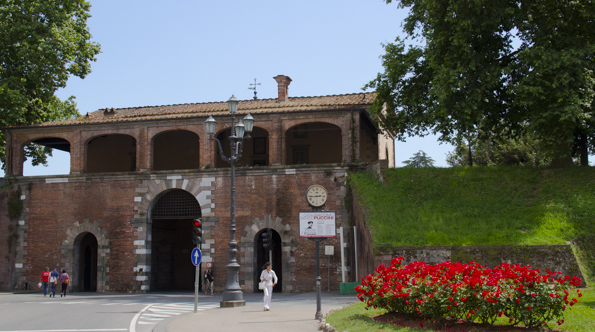 Bicycles of all sorts, single. Tandem and family trundled past me but I was happy to wander along the grass verge under the trees which gave me a good view of the buildings below. I had not been walking for long when I reached the Cathedral of San Martino as impressive from the back as I was sure it would be from the front. 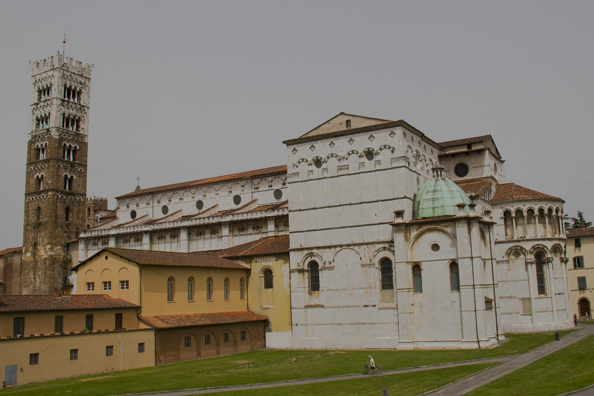 Spread out below me were the Comunale Orto Giardini di Lucca (public botanical gardens) and I spent some time trying to identify some of the trees that surrounded the small lake carpeted with water lily leaves. 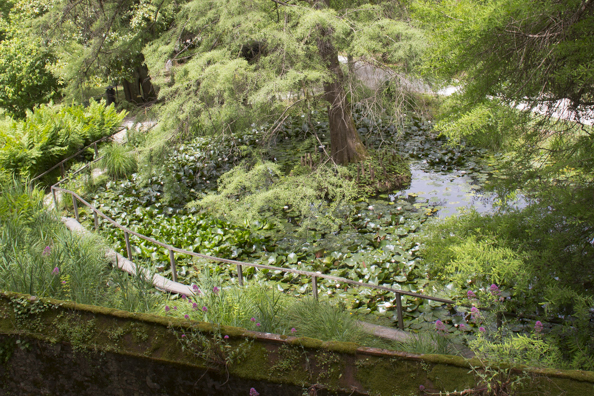 At regular intervals I came across ruins of bastions and each one had a board nearby explaining their design. They fell into disuse early in the history of the walls when threatened attacks from their most feared enemy, Florence, failed to materialise. 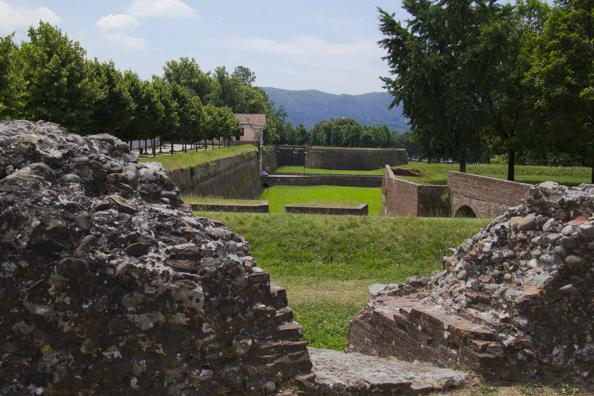 I paused to admire the beautiful gardens at the back of the Palazzo Pfanner http://www.palazzopfanner.it/en/ close to the church of San Frediano link whose tower kept a watchful eye on the statues that populated the paths amongst the green lawns and lush flower beds. 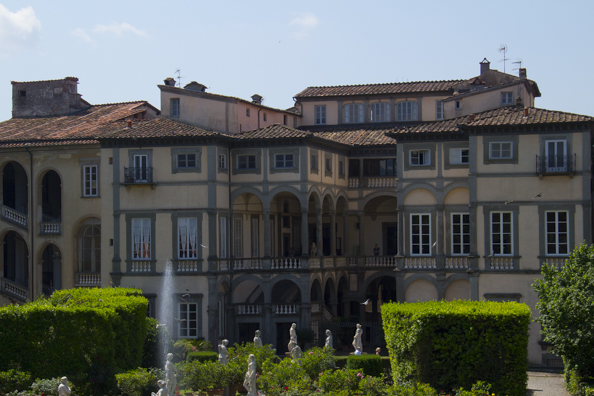 A large bronze sculpture on top of the walls is magnificent against a background of rolling Tuscan countryside. It was made to honour the centenary of the birth of the opearatice composer Alfredo Catalani who was born in Lucca. Sadly he died too young to leave much of a mark in the world of opera although many will recognise “Ebben, ne andrò lontano” (“Ah, well then, I shall go far away”) an aria from his most successful opera, La Wally, which has been featured on the soundtracks of several films. 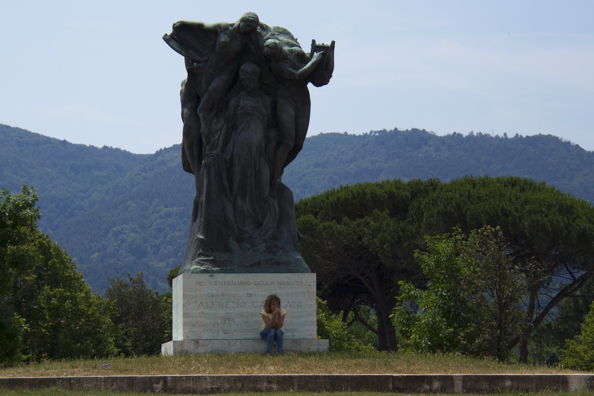 Just beyond the sculpture I recognised the statue of Garibaldi above Porta San Pietro and realised that I had completed the circuit. It was time for a break before exploring the town itself and in Via F Carrara below me I could see the ideal place. 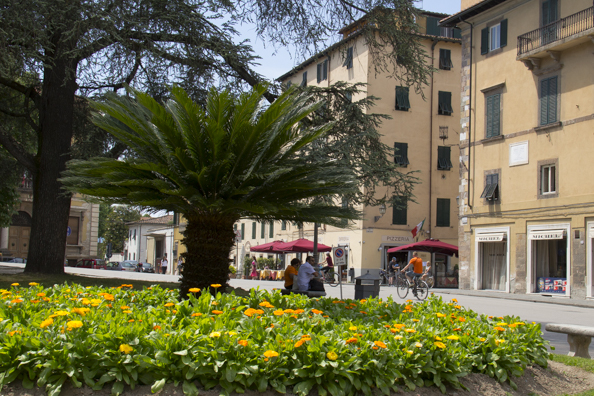