Matera - a tale of two cities

It was an astonishing introduction to Matera , the town that was built in the rocks tumbling down the side of the ravine La Gravina, through which the river of the same name flows. I stepped through a small archway and was immediately chased away by a local with his dog shouting “privato”. In the face of such menacing behaviour (the man not his dog) I retreated. Then I decided to stand my ground and defend my right to be there by pointing out, in his mother tongue, that I had been directed there by a sign ‘itinerario turistico’. His attitude changed immediately and he waved me through with a gracious “prego” (welcome). 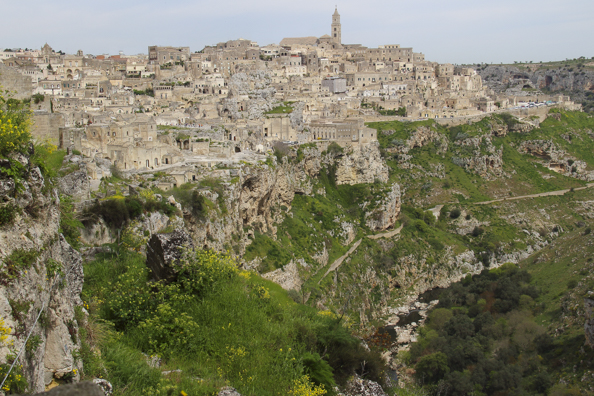 My objective was the Rupestrian church of Santa Barbara which I found at the bottom of two flights of steep steps. But the iron gate guarding the caves was securely padlocked and no opening times were displayed. There was nothing to indicate it may be opening any time soon but nevertheless I perched on a nearby wall to wait and see and to enjoy the beauty of the dramatic scenery around me. It was a bizarre mixture of rugged slopes plunging down to the river punctuated with caves and topped by modern apartment buildings. 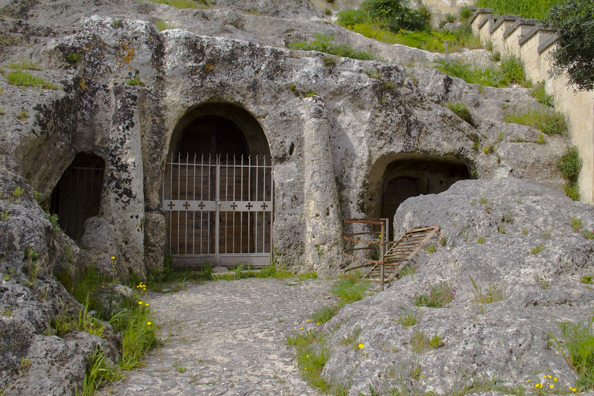 I had started at the furthest point of the area known as the Sasso Caveoso. I had wandered along a very ordinary street where the only sign that I was on the edge of a UNESCO World Heritage site was the occasional brown tourist sign pointing down narrow alleys from which it was possible to access the network of paths that wove their way up and down the slope of the ravine like a spider’s web. Many of these paths did not lead anywhere or were barred by locked iron gates. Several interesting sites in this area are subject to the vagaries of private ownership. Through the bars of one of these gates I had tantalising glimpses of an old monastery but my only option was to re-trace my steps. I met a local resident who asked me if the church was open and when I told him it was not he called the owner, his brother, to find out when it would be open. Having assured me it would be open early the next morning and encouraged me to come back we went our separate ways. 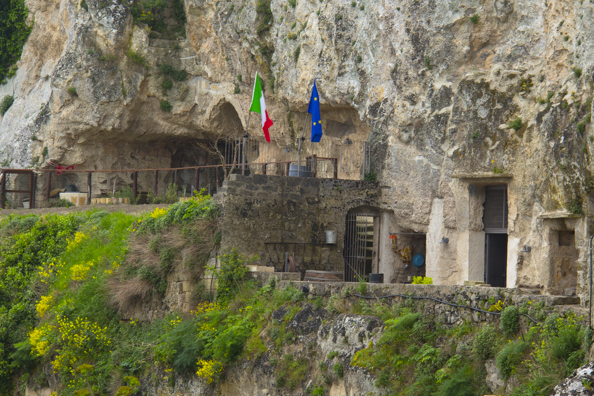 I did return the next morning and met the owner Francesco Festa who took me on a private tour of his monastery constantly punctuating his commentary with “no foto”. I was itching to disobey as the caves were also a small museum housing a fascinating collection. The monastery had been used for marriage ceremonies and examples of dowries, comprehensive lists of the items the bride would be bringing to her new home, were attached to the wall – one began ‘a mattress stuffed with wool’. Kitchen utensils, farming tools and as stamp for the bread – at one time baked in communal ovens were all displayed. But his most treasured exhibits were the frescoes on the walls including an unusual fresco of the sun on an arch. 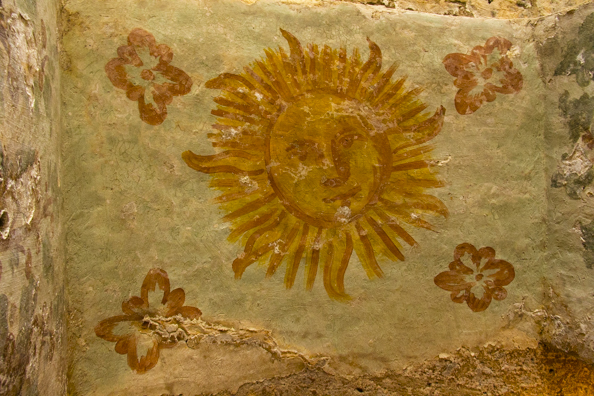 Moving on I found the Convincio di San Antonio an excellent example of a rupestrian church. I was enjoying my solitary exploration of Sasso Caveoso. Across the ravine I could see crowds of tourists arriving and making their way down to the more popular (but less evocative) Sasso Barisano that I could see perched on the hill top ahead of me. The Sassi are considered to be one of the most ancient cities in the world and have been inhabited continuously since the Paleolithic age till today. Thirty years after the Sassi were abandoned people, and in particular creative individuals, had begun to move back and to restore some of the buildings and convert some of them into hotels. Since the area was designated a UNESCO World Heritage site in 1993 there has been a steady stream of visitors to the area. 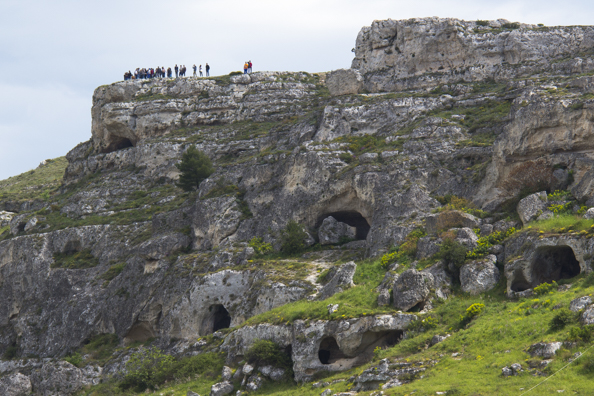 I was able to take my time exploring the various caves of the convincio and admiring the frescoes on the walls. It was incredible that hundreds of years ago people had tunnelled into the soft rock making separate rooms on two levels and had lived and worshipped there. 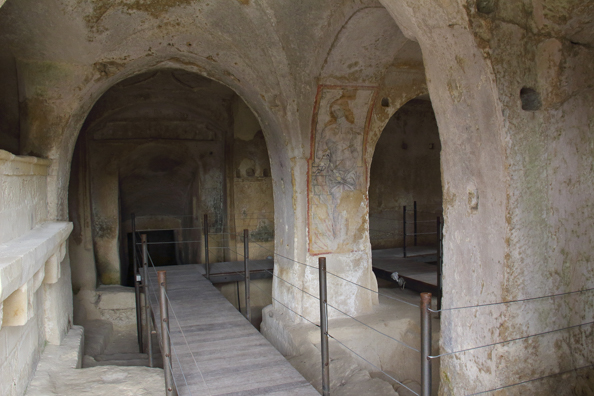 Casa Grotto del Casalnuovo is one of the original houses. I made my way through the narrow entrance (small entrance fee payable) into the gloom of a windowless dwelling which was suddenly flooded with light and a distant voice asked me in which language I would like to have the commentary. I chose English as I had the place to myself. It was a fascinating experience moving through the five areas each with a separate purpose – the living room, the kitchen, the bedroom and then down some very worn steps to the place where they had stored their wine and their animals. A small well in one corner had provided the water and an open fire with a protective cover in the middle had provided the heat. It was the combination of people and animals that had led to the Sassi being declared unfit for human habitation in the 1950s when legislation was passed requiring all inhabitants to move into modern housing built especially for them – Sasso Caveoso was left abandoned and some areas remain so. 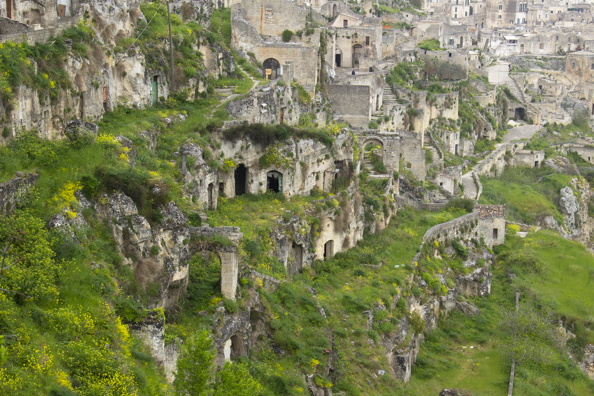 When I emerged into the piazza in front of the Church of San Pietro it seemed I had stepped into another world – large groups clustered around their guides, parents chided their exuberant offspring and local craftsmen encouraged visitors to buy their wares. I was in the more sophisticated Sasso Barisano. 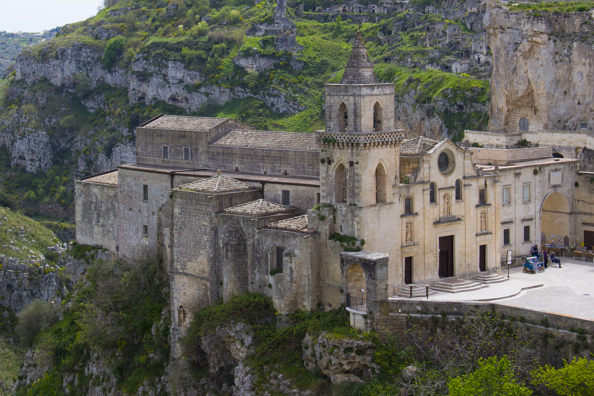 I made my way through the district known as the Civita up to the cathedral which is currently being restored but it was still possible to view the beautiful interior from a viewing platform. The hitherto slow re-building and restoration of the Sassi has become a frantic activity since it was announced that Matera was to be the Cultural City of 2019. The excitement this had generated was evident from a proliferation of both official posters and hand-written announcements. 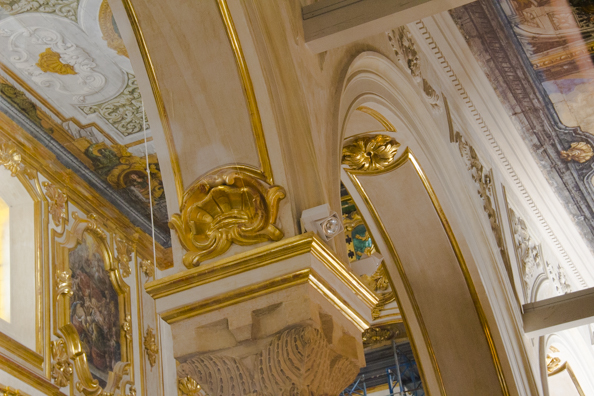 I spent a lot of time exploring Sasso Barisano wandering up and down its narrow alleyways and flights of uneven steps – it was a strange mixture of luxury hotels, simple guest houses and residential areas punctuated by small terraces from which I could enjoy views of the whole area. I was grateful for the regular signs pointing to specific buildings of special interest (mostly churches of which there are hundreds) which helped me find my way through the labyrinth of passageways. 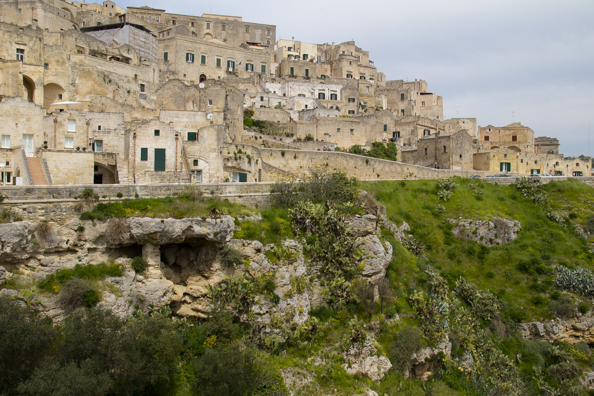 Finally I emerged in the Piazza Vittorio Veneto where I found the official tourist information office and asked for directions to the station – I had to leave the following day and I had found very little information on the internet about public transport. I did have a look around the square the home of the pretty Chiesa di Materdomini and the sub-terranean church of Santo Spirito I did not have to wait for one of the guided tours through the Palombaro Lungo an underground masterpiece of hydraulic engineering that supplied water to the whole city from the huge tanks in which rain water was collected. But later in the day I came across the Casa Cisterna where, after a tour of the house we had a demonstration of the cistern system that supplied water to individual houses. I moved on to Castello Tramontano standing proudly atop the small hill from which is has guarded the town for centuries but currently inaccessible as it is being renovated and will be the centrepiece of a new city park. 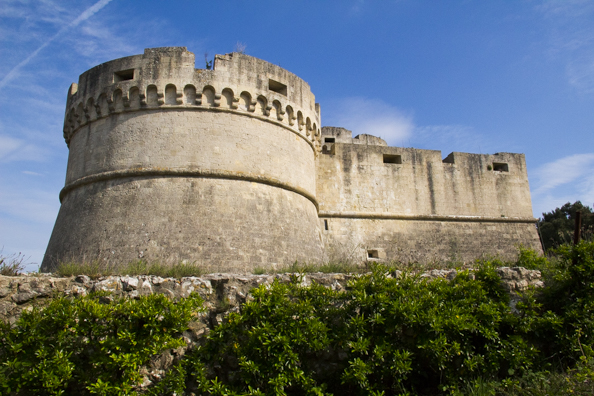 My circle was nearly complete as I wandered along the widening Via Rupina enjoying the the contrast of deep pink blossom against the cream stone walls of the old buildings. 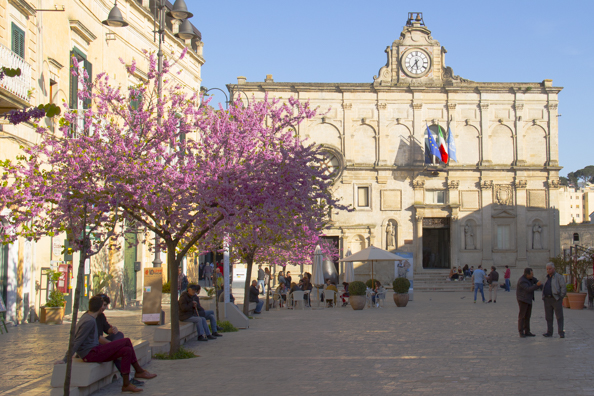 I found a terrace overlooking Sasso Caveoso – one last lingering look at the church of Church of Santa Maria Idris, housed in a huge rocky mound now lit up by the golden rays of the sun. 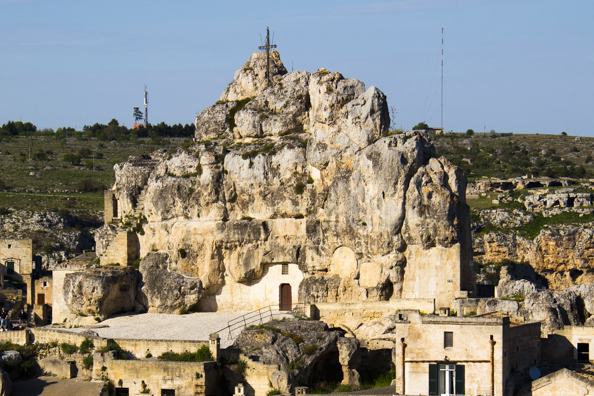