The boat was full and the only space we could find was a row of seats outside and right at the front. Soon after we set off the wind started to seriously batter us and everyone moved inside. As we pushed past each other the sticky labels our guide had thoughtfully stuck on our chests were transferred to other passengers and we had fun retrieving them from complete strangers 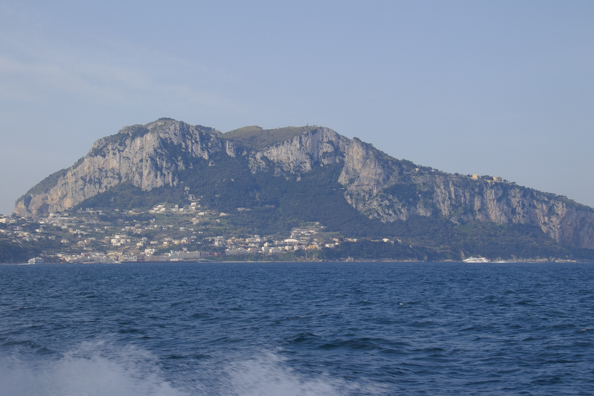 By the time we docked in the Marina Grand we had composed ourselves and were ready to explore the beautiful island of Capri. This pretty island can trace its origins back to the Greeks and one theory is that it was named after the Greek word Kapros, meaning wild boar but others claim the name comes from the Latin word Capreae that means goats. Caesar Augustus visited the island in 29 BC when it was owned by the City of Naples and he was so captivated by its beauty that he exchanged it for the island of Ischia in the same bay. During the reign of his successor, Tiberius, twelve villas were built on Capri. Tiberius preferred to rule his empire from a tranquil island rather than the turbulence of the mainland. Today there is only visible evidence of just one of these villas. 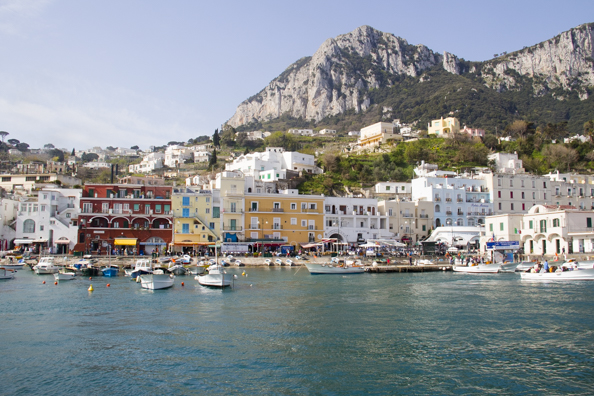 Over the centuries the island was not affected by political events unfolding in Naples as one dynasty succeeded and it was also left unprotected from the threat of Muslim attack and it was left to fend for itself. Most of the population abandoned their homes around the marina and took refuge in the uplands creating a second community. The island has few natural resources and its population declined due to pirates, plagues and rivalry between the two communities, Capri and Anacapri (which means above Capri). But during the nineteenth century Capri once again found fame for its magical solitude and rustic simplicity and this attracted foreign artists, writers and poets to its shores. The first hotel, Locanda Pagano was built in 1826 and now there are luxury hotels in abundance including the fabulous Grand Hotel Quisisana that was originally a hospital but its exterior is now surrounded by chairs and tables with smart waiters weaving through them as they carry trays of drinks to their guests which, the day we visited, included a Rottweiler dog wearing sunglasses and sitting on a chair between its owners. 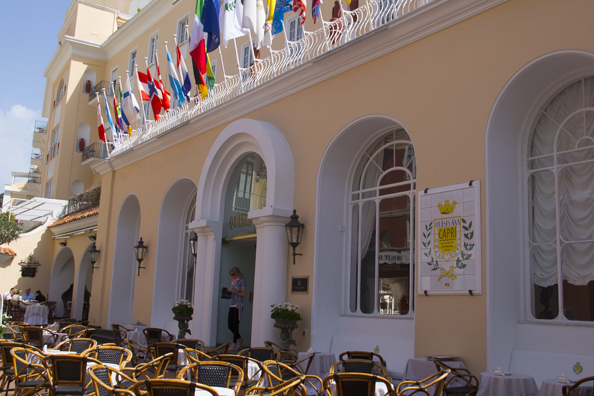 As soon as we disembarked we booked the visit to the Grotta Azzurra and also bought a ticket for all public transport on the island including the funicular that connects Capri and the Marina Grande. A minibus took us down to the sea and we snaked down a long winding road with luxuriant vegetation on either side. It was so narrow in places that vehicles could not pass and our driver vociferously claimed the right of passage every time except when we encountered a public bus on its way back from the grotto. On arrival we joined a long queue on the steps down to the water’s edge and waited for our turn to get into one of the small rowing boats that go inside the grotto. Our driver, having told us to get a move on, then disappeared. I was not sure how we could follow his instructions when clearly there was nowhere to move on to. Below us the little bay was full of boats, large excursion boats decanted their passengers into the small rowing boats and private yachts were awaiting their turn. It seemed we would be there all morning as the queue was barely moving. 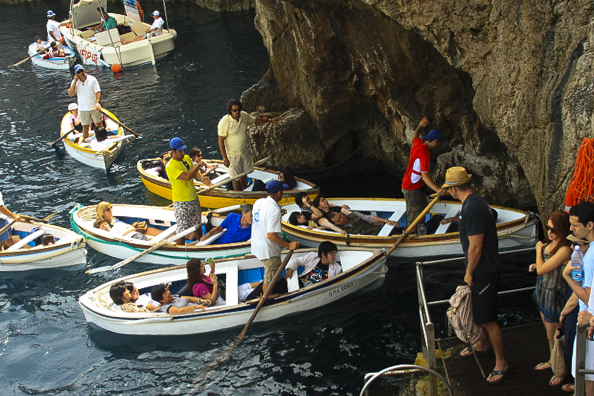 We had to be careful stepping into the boat as the regularly washed the bottom step and any feet resting thereon. Before entering the grotto we rowed to the ‘ticket office’, a boat bobbing on the water, to pay the entrance fee before joining the queued to go inside the grotto. As we waited outside the grotto several boats emerged from its interior and there were several collisions as they shot out of the narrow opening – one cannoned into our boat as it shot out of the opening – rowing boat dodgems. At last it was our turn and we all had to lie flat as the boatman used a chain to pull us through the very low, narrow entrance into the grotto while lying across the laps of the passengers in the stern. I shut my eyes but I could sense the rock just inches above my head. When the boatman said we could sit up an amazing sight greeted me. We were in a huge cavern filled with blue light from the water below us. More boats came in behind us and we all circled the cavern as the boatmen sang Oh Sole Mio. A memorable but fleeting experience, one circuit and we were catapulted out again and raced up the steps to join the bus that was waiting impatiently to transport us back to Marina Grande where we managed to find spaces on the public bus to Anacapri. 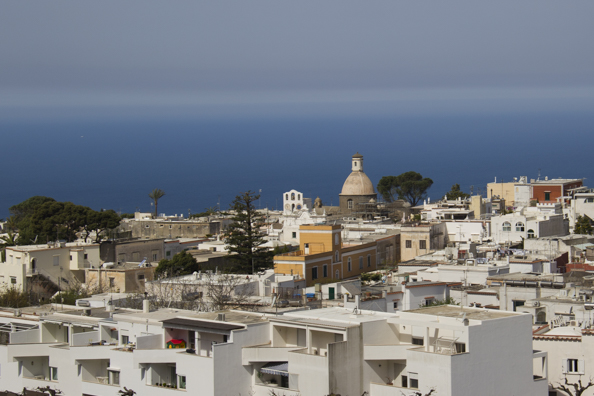 When we arrived in Anacapri our first priority was finding a toilet. I remembered that on my first visit we had gone into a very posh shop with nice toilets at the back. First we had to show an interest in the goods on display. We ambled inside and after a fleeting glance at some very expensive leather handbags we raced through the shop and disappeared into their posh toilets. We were now ready for the next adventure – the chair lift to the summit of Monte Solaro. It cost €10 for the return journey although we could have paid less and walked down but we did not have time. In a line of single chairs we rose slowly to the top of Monte Solaro which takes thirteen minutes. Below us we could see the terraced small holdings. At the top we had good views of the whole island. 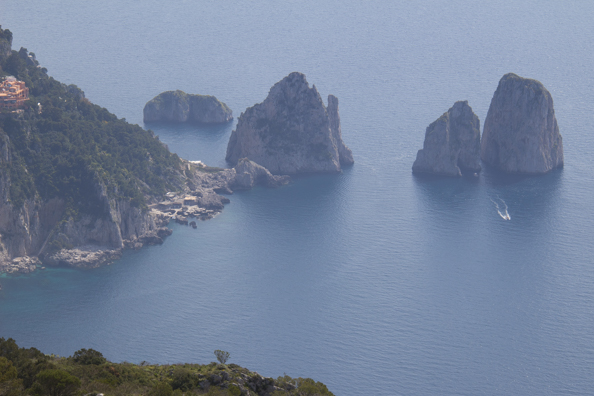 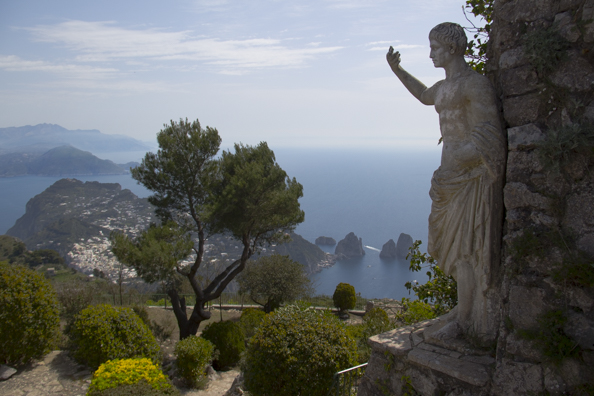 Following the Russian-Japanese war of 1905 and the great exodus of Russian intellectuals Capri established itself as a literary and political refuge and became the home of some famous people including the Swedish writer Axel Munthe whose beautiful house, Villa San Michele, is open to the public. The house is not very big but the rooms have been preserved as though its owner had just slipped out on an errand. The gardens are beautiful with arched trellises, camomile lawns, abundant blooms and at the far end the chapel with a terrace that looks out to sea. A sphinx on the wall of this terrace is positioned so it is impossible to see its face from any angle. How the sphinx got there is a mystery – when questioned Axel Munthe would smile and say that it had appeared to him in a dream. 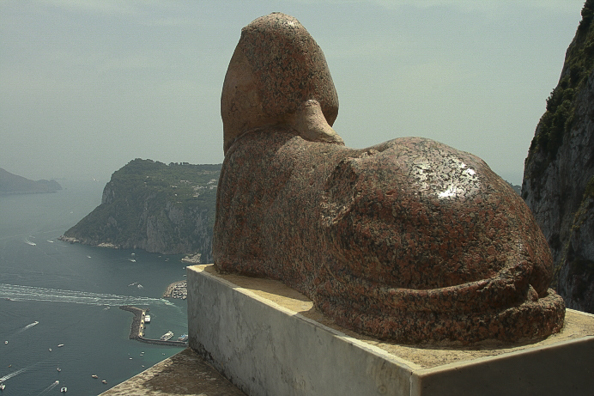 We got the bus to Capri and threaded our way through the main square, Piazza Umberto 1 but commonly called La Piazzetta, and then walked down the hill passing designer shops and luxury hotels before stopping for lunch at Villa Verde – a quiet refuge from the crowds offering excellent pizze. We passed the old Charterhouse of Saint Giacomo but as it is closed between 2 and 5 in the afternoon it was not possible to go inside. Immune to many invitations to visit perfume shops and sandal makers we continued to the Giardini Augusto (Augustus Gardens). After paying the entrance fee (€1) we went straight to the viewpoint from which, across the bay, we could see the house where Gracie Fields had lived, Via Krupp clinging to the cliffs below us as it zig zags down to Marina Piccola and i faraglioni a row of tall jagged rocks rearing up majestically from the sea. We spent some time exploring the lovely gardens was well. Both the gardens and Via Krupp were built by Friedrich Alfred Krupp a German steel magnate and avid marine biologist. He commissioned the scenic route so he could easily reach his yacht in Marina Piccola from his suite at the Grand Hotel Quisisana. 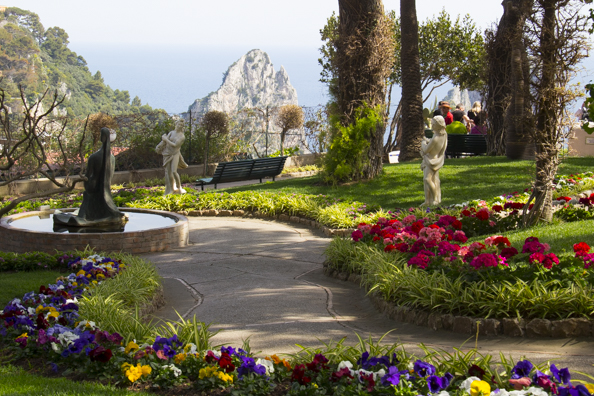 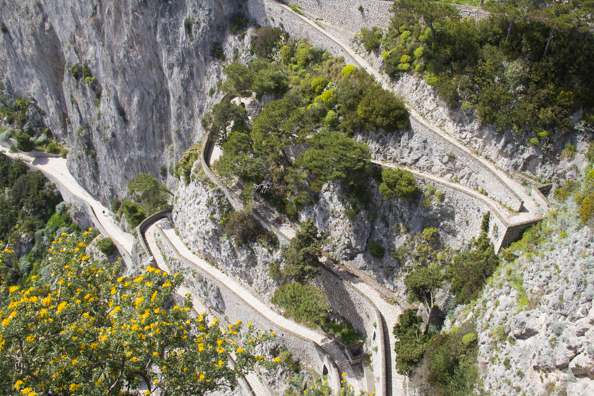 I made my own way back through an upmarket rabbit warren of very narrow streets dotted with small, exclusive boutiques. There were no signs and so I had to rely on my sense of direction and just as I had convinced myself I was hopelessly lost I popped out in La Piazzetta. While waiting for my companions on the terrace overlooking Marina Grande a young Japanese girl asked me to take a picture of herself and her boyfriend posing in front of this panorama. She gave me the camera, pointed at the shutter button and said “shut up”. 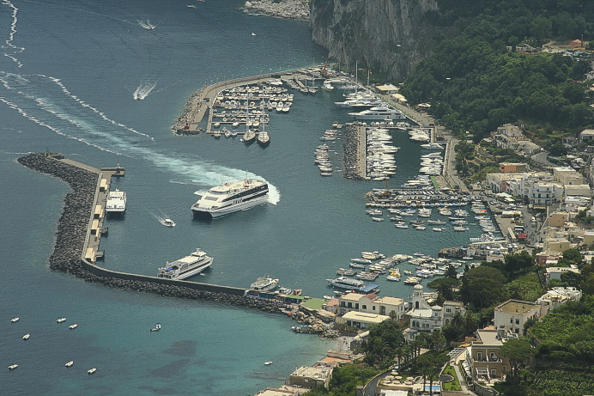