A Bike Ride Along Poole Harbour

Poole Harbour is the largest natural harbour in Europe and a hive of activity all year round. I decided to explore the section between the tip of the Sandbanks peninsula and Poole Quay. Before setting off on my bike I paused to watch the chain ferry make its way slowly across the channel from Studland Beach. 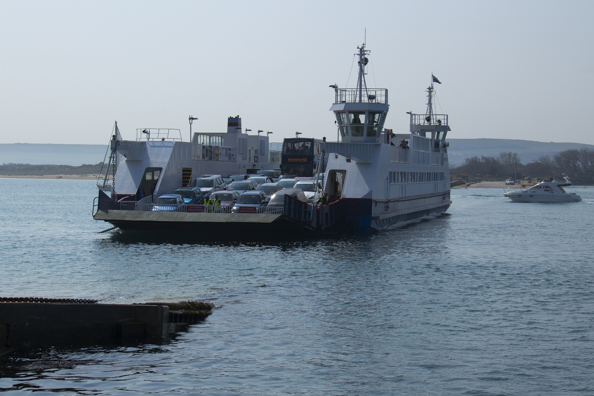 This channel was busy with yachts from several yacht clubs around the harbour making their way out to sea and the Brownsea Island ferry carving its way through the calm waters. 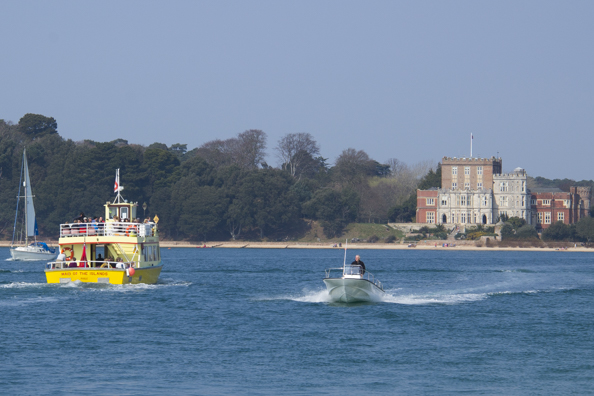 After cycling past some of the beautiful houses at the tip of the peninsula I joined a path that skirts Whitley Lake. Famous as a good venue for kit boarding the waters today were too calm and I watched as some optimistic wind surfers sank slowly into the sea finally accepting there was barely enough wind to fill their sails – some young canoeists were having a more successful time. 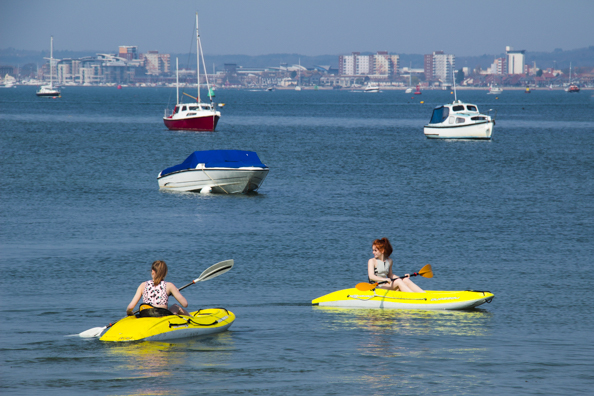 Puffing up Evening Hill I finally made it to the view point and spent some time up there enjoying the splendid panorama spread out before me. 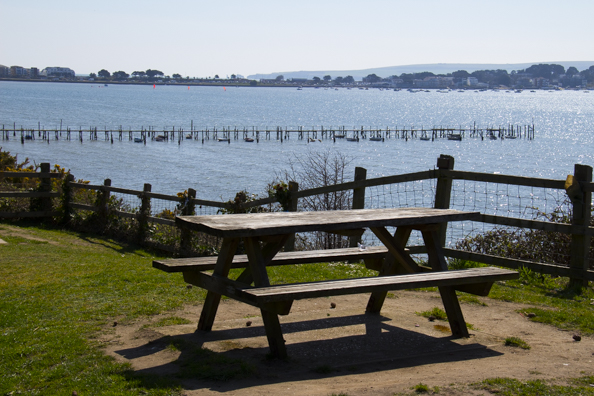 I had to follow the road for a while excluded from the shore line by a series of yacht clubs and boat builders although I did make a detour to catch a glimpse of the Blue Lagoon where the Lilliput Sailing Club is based. 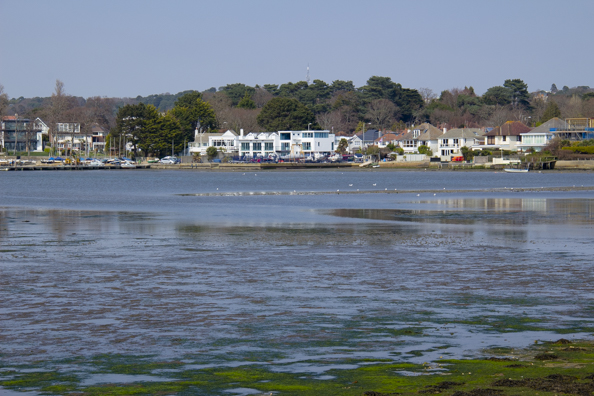 I continued along the main road on the cycle track through the village of Lilliput – yes, really Lilliput and a reminder of the famous book Gulliver’s Travels by Jonathan Swift but not necessarily connected – until I was able to turn down to the harbour again, past the Parkstone Yacht Club 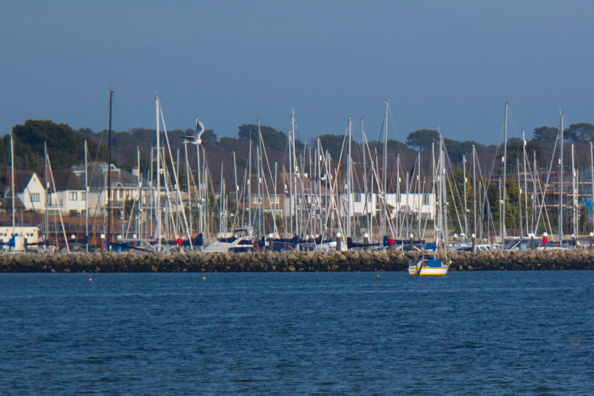 Bumping along one of the tracks that cross the Whitecliff recreation ground I re-joined the road where I could enjoy another panoramic view of the harbour before going through the small hump back bridge that carries the railway line to and from Poole and entering Poole Park. 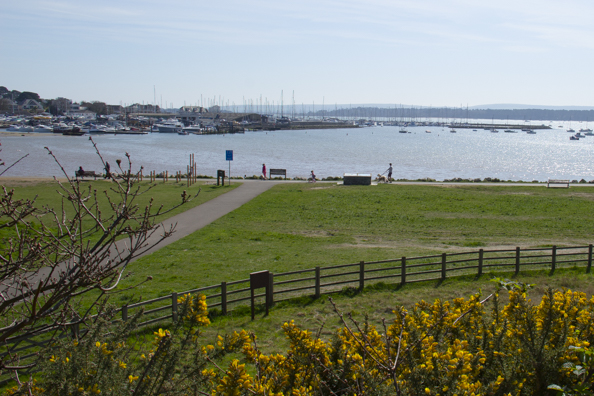 Fed by water from the harbour the lakes in this park offer a variety of activities including a model boat section which is part of the large boating lake. The park includes grassy areas and gardens and all criss-crossed by paths for walking and cycling. 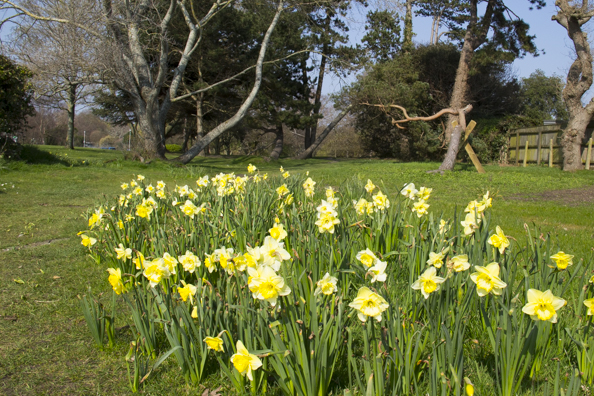 I was immediately attracted by a commotion on the boating lake and made my way there just in time to see some amorous mute swans flirting on the water. 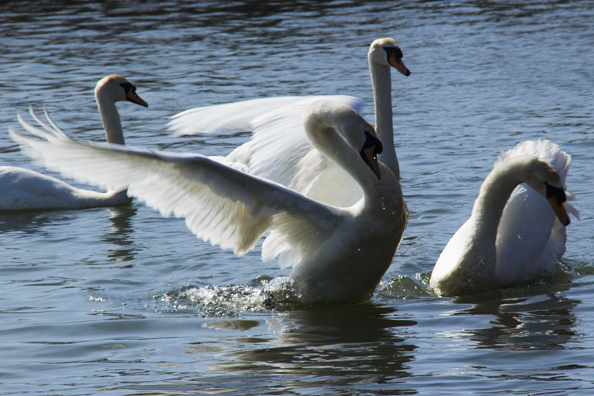 They were soon distracted by the arrival of a family with bags of stale bread and the swift arrivals of other inhabitants of the lake. 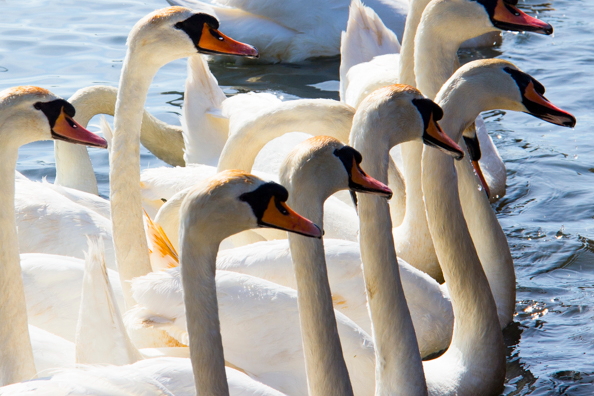 I was amused by the disdainful look on the faces of a pair of Greylag Geese nearby. 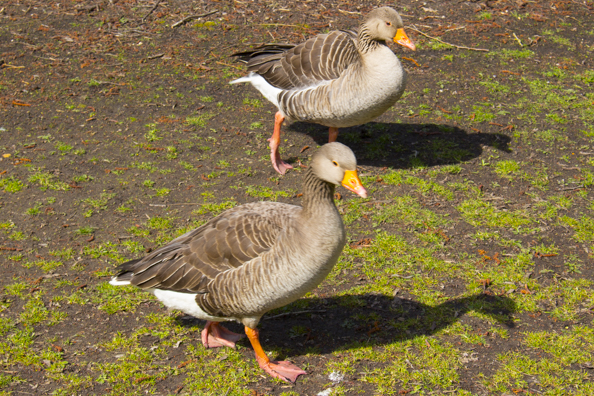 An even greater commotion had started on the small wildfowl lake in front of the Ark – a restaurant and activity centre for families. 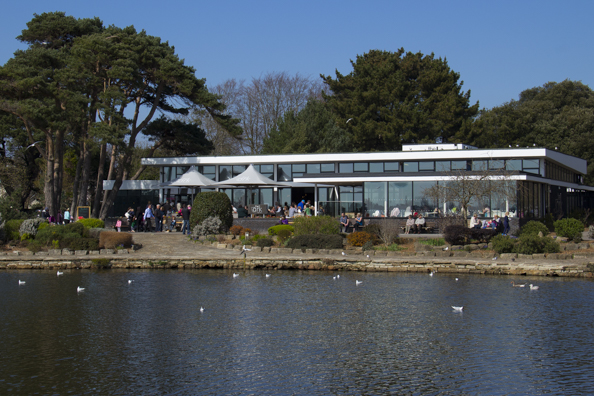 I arrived just as a skirmish between several greylag geese was coming to an end and some of the combatants were swimming away their heads held high watched by the only white greylag goose on the water. 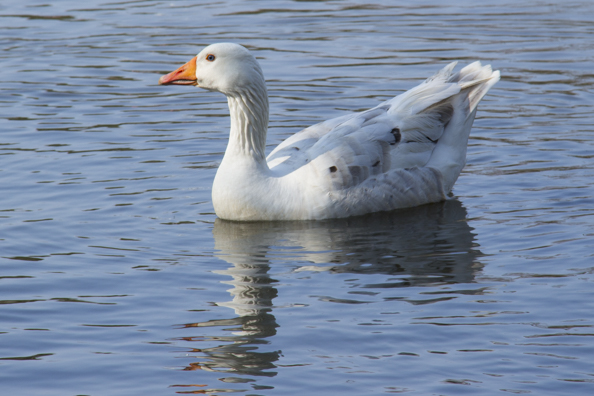 As I circled this small lake I was amazed at the variety of birds on and around the water, including a solitary Muscovy Duck – they are not renowned for their beauty and I could see why. 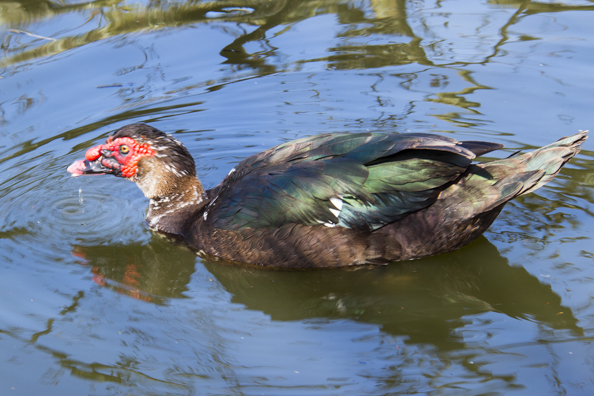 There was so much to see in the park and so much to do – boating, crazy golf and putting, tennis, bowls, fitness training or just sitting in the beautiful garden surrounding the War Memorial. 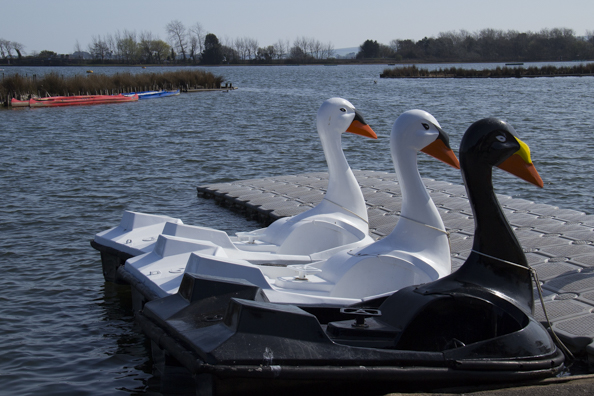 After cycling all the way around the lake, enjoying the views from all angles and resisting the temptation to stop for afternoon tea at the Sevens Boatshed I made my way back to the Whitecliff Recreaton Ground. 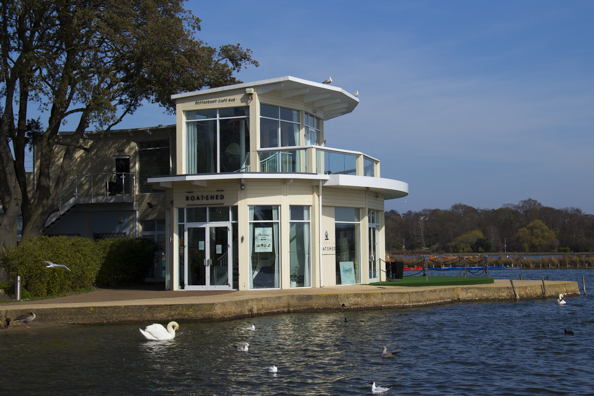 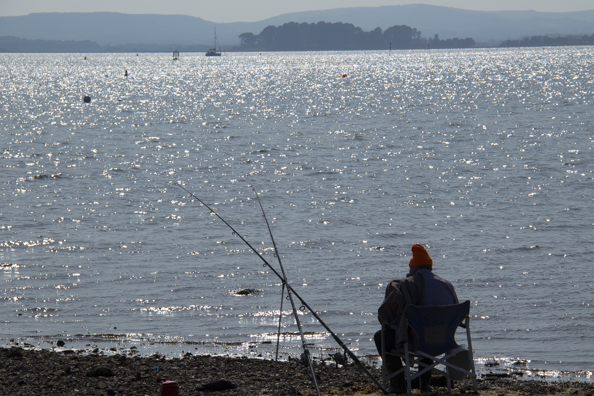 I was now approaching Poole and its famous quay passing the old lifeboat station (which is now a museum) where I found a plaque with this dedication:
From this quay, 60 cutters of the United States Coast Guard Rescue Flotilla 1 departed for the Normandy Invasion 6 June 1944. These 83 foot boats made entirely of wood, and the 840 crew members were credited with saving the lives of 1437 men and one woman. In remembrance of the service rendered by Rescue Flotilla 1, and with appreciation of the kindnesses for the people of Poole to the crews, this plaque is given by men and women of the United States Coast Guard. 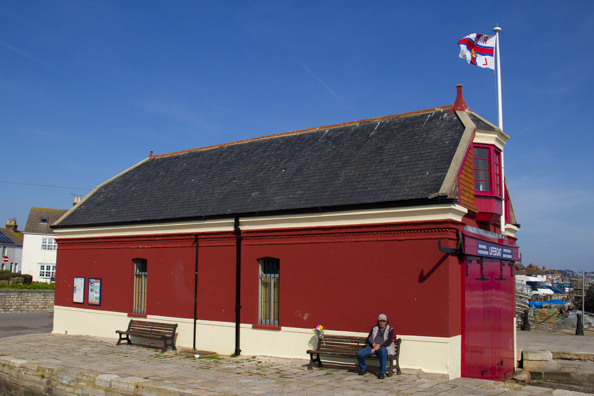 I passed some fishing boats 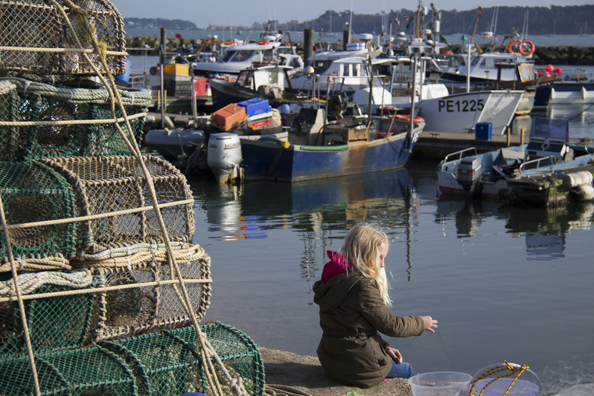 luxury yachts bobbing at their moorings in a small marina 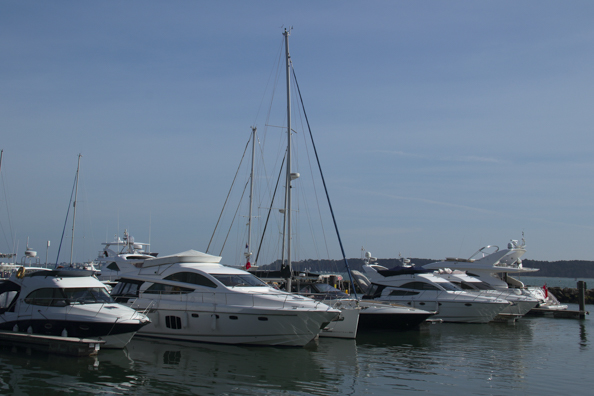 and finally came to the business end where yachts were being built and cargoes were being unloaded. 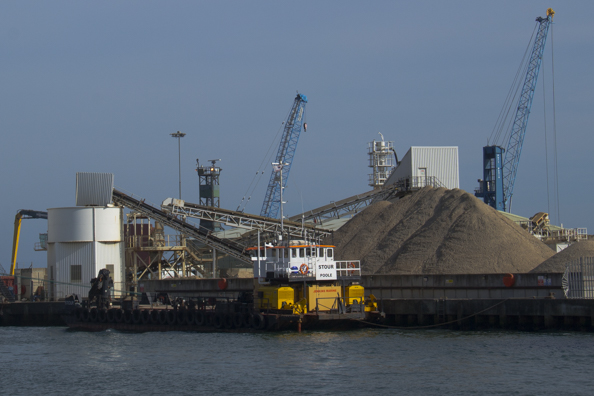 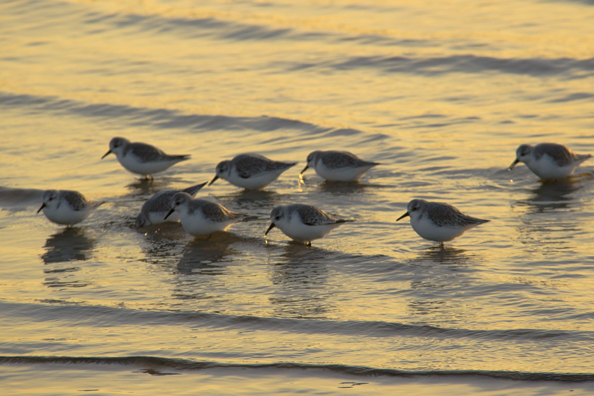 people were digging for bait – a regulated activity in the harbour 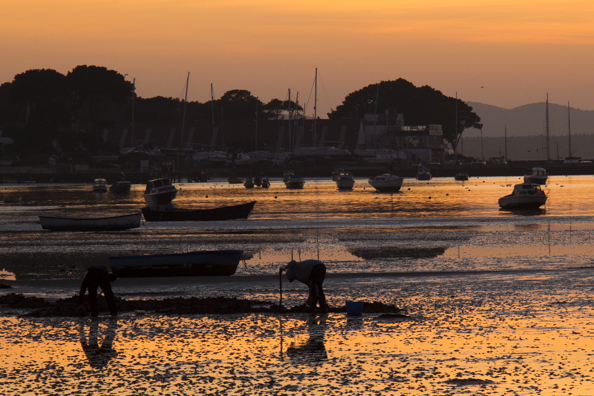 and my lovely day was brought to a close by a fabulous sunset. 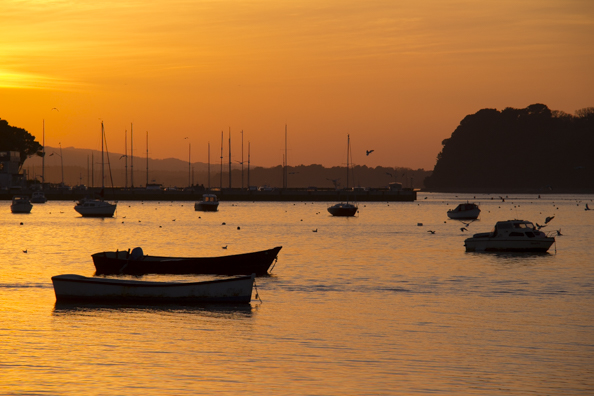