A Carnival in Venice

As I emerged from the confinement of the Arrivals Hall into the fresh air a frisson of excitement rolled through me – ahead of me the vast expanse of the Lido glistened under the rays of a bright winter sun and beside me the water slapped against the wooden jetty. The engine of our water taxi throbbed in readiness to whisk us into the centre of one of the most famous cities in the world, Venice. 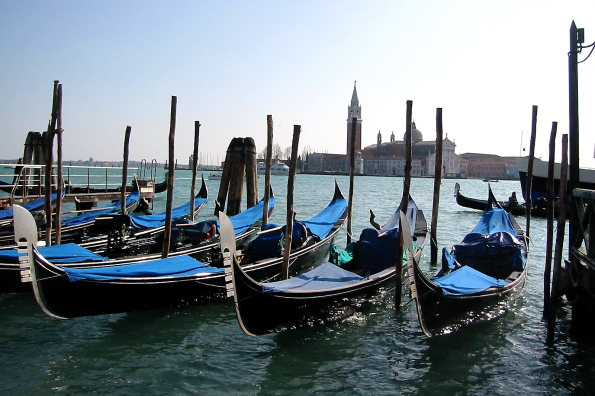 We sped across the lido towards the centre of Venice a city built on 118 small islands. These islands are connected by around 100 canals and linked by some 400 bridges. We were soon weaving our way through the network of canals exclaiming at the sights we saw – barges full of building materials, one of which was supporting a full-sized crane, a local refuse collecting boat and floating vegetable stalls. After cruising along the Canal Grande we reached the waterfront of Piazza San Marco. There were so many people in the square it seemed there would be no room for us but nevertheless we plunged in amongst them. It was the Venice Carnival (Carnevale in Italian) and the city was full. 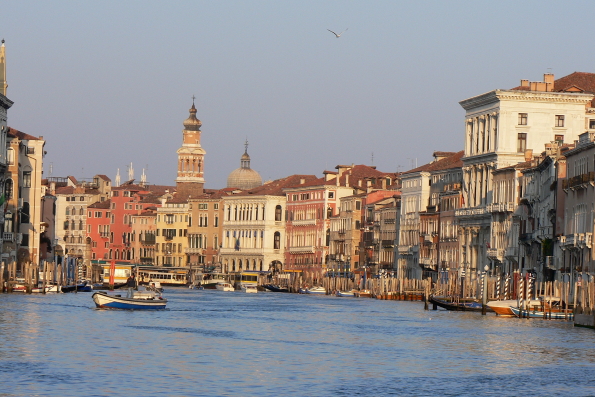 Carnevale means ‘farewell, meat’, because the obligation to fast during Lent meant that all meat, butter and eggs had to be used up by Ash Wednesday. Hundreds of years ago this became an excuse for a party that was more pagan than Christian and lasted from Twelfth Night (January 6) until midnight on Shrove Tuesday. It is also recorded that in 1162 the Repubblica Serenissima di Venezia Serenissima di Venezia (the most serene republic of Venice), to celebrate the defeat of an opposing republic, began a tradition of slaughtering a bull and twelve pigs in the Piazza San Marco around Shrove Tuesday. As time went by it became common to wear masks during these celebrations. Masks concealed personal identities and allowed people of all classes to get up to mischief including the performance of immoral acts in churches and convents. 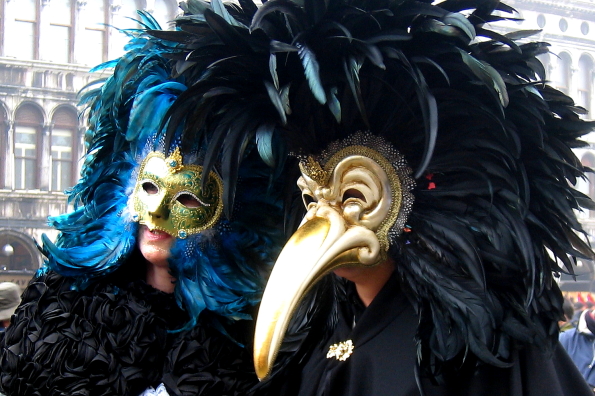 As news of these wild festivities spread far and wide large numbers of foreign visitors were attracted to the city. They spent small fortunes in gambling dens, brothels, theatres, cafés, wine shops (licensed and illicit), restaurants and booths displaying exotic animals, ropewalkers and jugglers. In 1268 it was decided that something had to be done to halt the declining morals of the Venetians and measures were introduced forbidding those wearing masks (the masqueraders) from throwing eggs at those not wearing masks. More restraints became necessary at the beginning of the seventeenth century due to the pranks of masqueraders who were getting in convents and other religious places. It was decreed, that masks could only be worn during the carnival period while attending official banquets and heavy penalties were imposed for breaking this law. Anyone wearing a mask was not allowed to enter any holy places and it was expressly forbidden to wear a make with religious clothes. That same decree prohibited the use of drums before midday and also dancing of any description outside the carnival period. But Venetian nobles continued to wear masks when gambling in casinos to avoid their creditors so at the beginning of the eighteenth century this practice also became illegal. 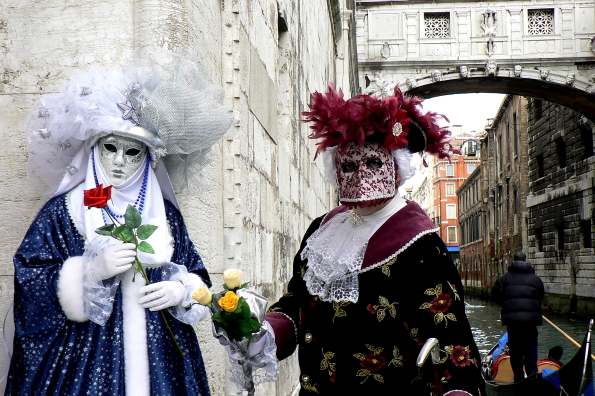 In 1797 when Venice was conquered by Napoleon and subsequently became part of the Austro-Habsburg Empire the wearing of masks was banned to avoid rebellion by citizens although it continued on the main island but in a very modest way. During the 1930s the carnival was totally banned by Mussolini banned it because it did not fit in with his Fascist policies. In 1979 a group of Venetians and lovers of Venice decided to revive the tradition and within a short time the image of the masked reveller had become world famous. Staged mainly for tourists, the present Carnival comprises a programme of events during its themed two-week period and visitors attire themselves in extravagant costumes and elaborate masks creating an amazing festive atmosphere. 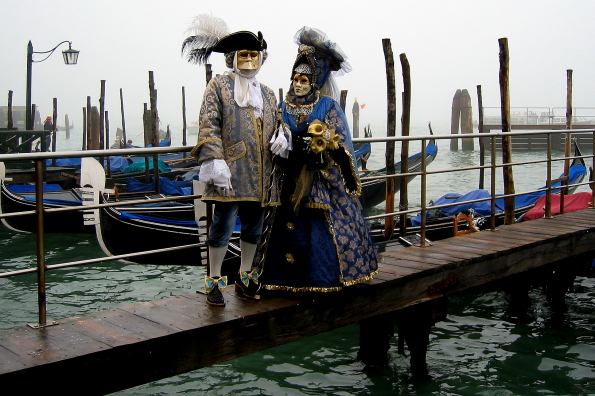 The spectacle of fabulous costumes drifting past the famous monuments that encircled the Piazza San Marco distracted us from our planned sightseeing. We spent some time recording this display on our cameras and then, as it was so beautiful in the square, we squandered a small fortune on a coffee sitting outside a restaurant enjoying the music of a small orchestra. Participants in the parade also stopped here for a drink – an easy target for the snap-happy tourists. Finally we moved on having decided to go to the top of the nearby Campanile (bell tower) from where we would have a good view of the city ninety-nine metres below us. 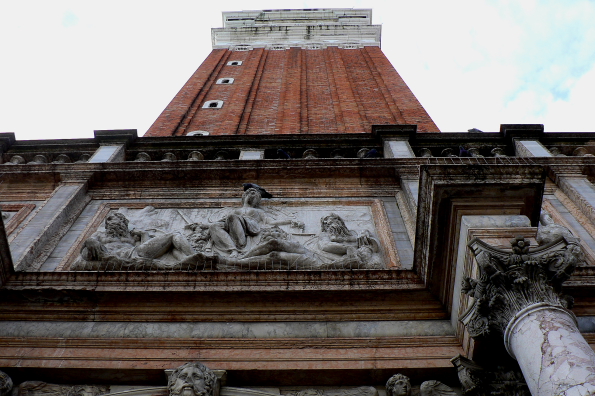 There has been a bell tower on this site for more than one thousand years. The original was modified when it was damaged by an earthquake during the sixteenth century. It then collapsed, inexplicably, one sunny July morning in 1912. Amazingly no one was injured. The present tower replicates the original one that had served several purposes. It was a watchtower due to its strategic position, a daytime beacon for ships as the sun was reflected off the bronze roof and its five bells conveyed different messages during the day. The largest (and loudest) marked the beginning and end of the working day, another chimed the hour, a third called senators to the Doge’s Palace, the fourth summoned magistrates and the smallest, il Maleficio, announced the execution of prisoners who were dangled in cages halfway up the walls of the tower. These bells still chime today but only for traditional and entertainment purposes. 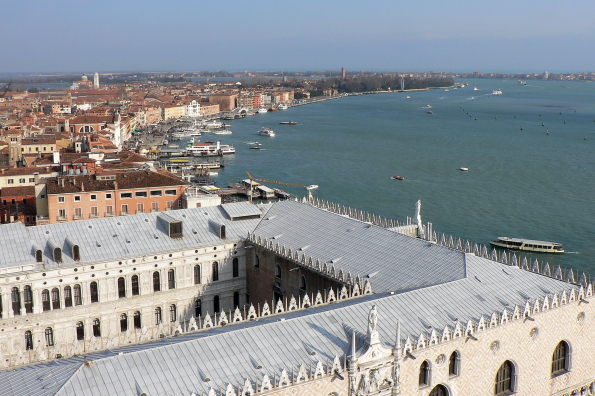 The view from the top was spectacular and Venice was spread below us like a 3-D map. Having identified all the buildings in the Piazza San Marco we moved to the other side from where we could see the Canal Grande (Grand Canal) and the Isola di Giudecca (Island of Giudecca), a quiet district where few tourists go and the site of the beautiful church of the Redentore, a masterpiece of the architect Palladio. Next to this island is another island where the church of San Giorgio Maggiore, also by Palladio, is splendidly situated. 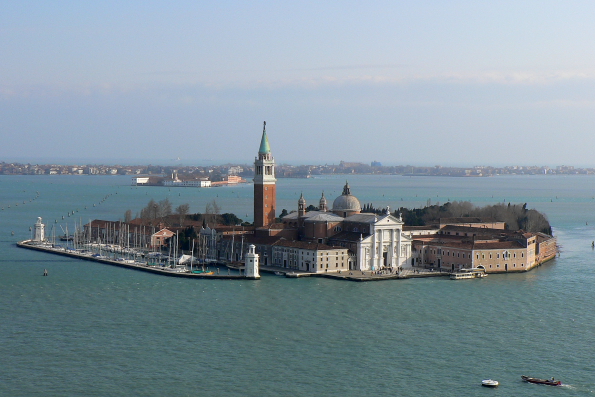 At the end of the day we took the bus back to the airport for our evening flight. We strolled back to the bus station in Piazzale Roma via the Ponte Rialto (Rialto Bridge). This is the oldest of the three bridges that span the Canal Grande. It was originally built of wood but when it collapsed in 1440 it was rebuilt and included several shops in the structure. But this bridge was unstable as it had been constructed to allow the middle section to be moved so that all traffic on the canal could sail through. During the sixteenth century it was decided to build a new bridge and a competition was held to find the best design and although Michelangelo and Palladio were two of those involved the commission was eventually awarded to the relatively unknown Antonio Da Ponte. This bridge was finally finished in 1592 and crosses the Canal Grande at its narrowest point. The twenty-four shops that line the bridge are behind a double arcade and from the terraces of this area there are wonderful views along the Canal Grande. 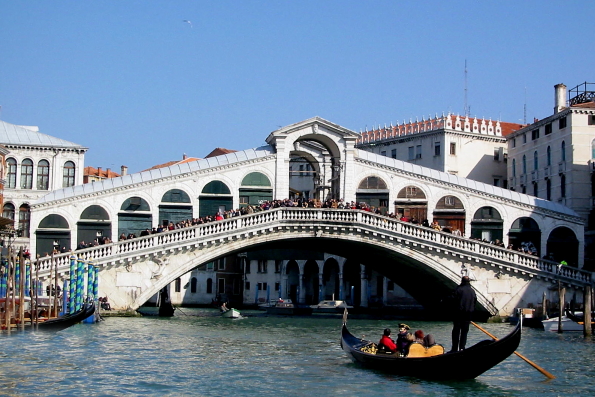 That first visit to the Carnival whetted my appetite and my next visit was during a stay on the coast of Slovenia from where catamarans also regularly crossed the Golfo di Venezia bringing visitors to the city from Slovenia. The catamarans are large and comfortable and arrive and depart from a ferry terminal not far from the centre of Venice. My next visit to the Carnival was during a four day stay in the nearby resort of Lido di Jesolo. The first morning we made our way to the local terminal along with thousands of other visitors all arriving in large coaches. The next morning we started a bit later to avoid the rush and spent the day exploring the islands of Murano (famous for its glass) and Burano (famous for its lace). Burano is a very attractive island with its pastel coloured buildings and shops overflowing with items made in lace. It is also a favourite spot for wearers of extravagant carnival costumes to flaunt themselves and pose for photographers. 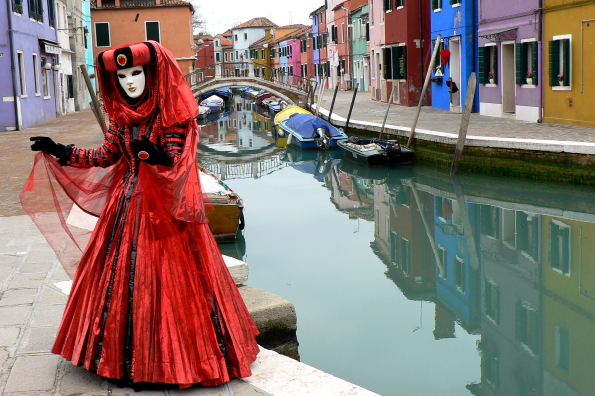 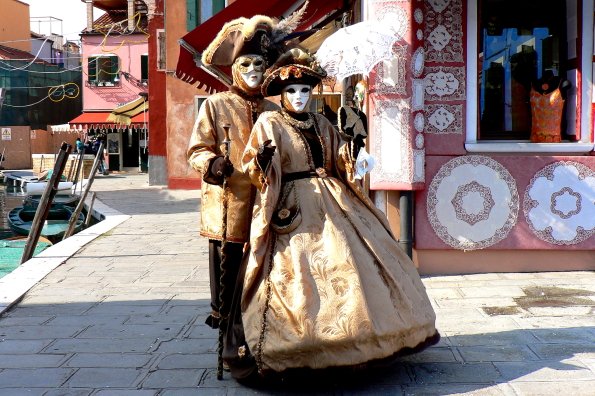