As my chair slid across the deck at great speed I grabbed the side of the boat to arrest my flight but it came away in my hands – it was the small table that had been set up for lunch and then stored behind my chair. I finally came to rest on the other side of the boat. My fairground experience was over. I had to control my exuberance as there were people on the boat being sick, including a crew member who was lying in one of the cabins moaning. We were on our way back to Santa Cruz Island from Bartolomé Island in the Galapagos Archipelago. 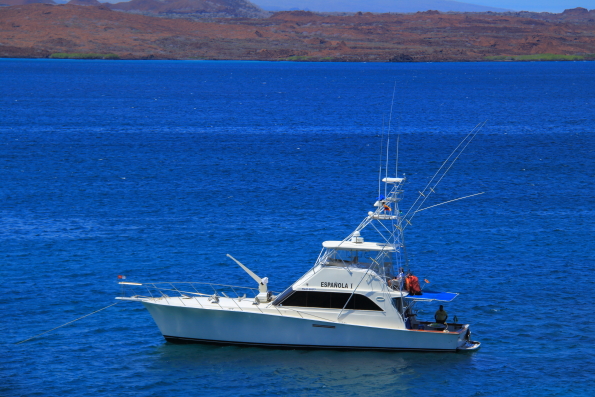 Our day had started when we were collected from our hotel, Silberstein Hotel in Port Aroya, and driven across the island of Santa Cruz to the ferry terminal where our boat, Espanola 1, was bobbing in the bay. A small dinghy took us across the water and we clambered aboard and settled down, ready for our adventure. It was a two hour journey between the islands and the sun was shining, birds flew overhead and sea lions floated in the sea beside us and time passed quickly and pleasantly until we anchored in a bay on Bartolomé Island. We chugged to the small landing stage in our dinghy where we were greeted by a friendly sea lion who was not at all concerned about our presence there. While the advance party waited for the rest of the group we were amused by the antics of the brightly coloured Sally Lightfoot crabs on the rocks below. 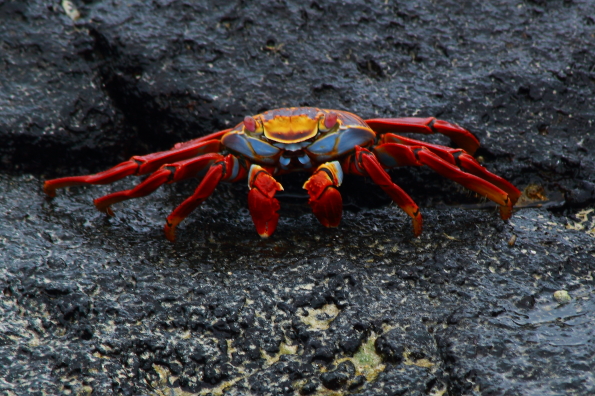 This, their common name is thought to have originated from a Caribbean dancer and refers to their inherent agility – jumping from rock to rock and climbing up vertical terrain – but they are also called Red Rock Crabs. These crabs were sighted by Charles Darwin during his voyages on HMS Beagle. It was exciting to think we were following in such famous footsteps although our way was made easier by a well- constructed wooden path and a series of steps to the lighthouse on the top of Pinnacle Rock, a volcanic cone, that was formed when an underwater volcano erupted. 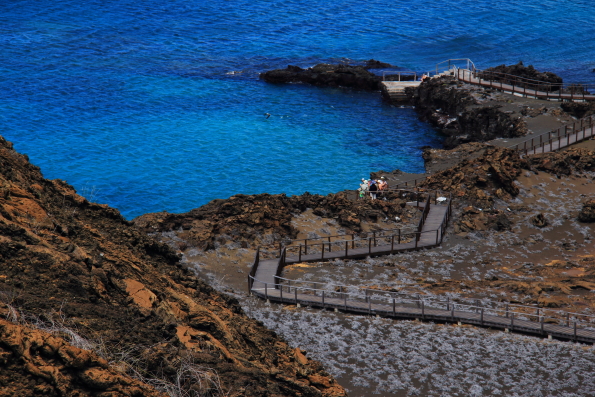 On the way we passed some fascinating plants that resembled feather dusters and we could hear the tiny lava lizards scuttling amongst the brown rocks. Occasionally one would stay still long enough to take a photo. When we got to the top the views were spectacular with the islands spread out below us so we could appreciate the strange topography while our guide explained the geology to us. 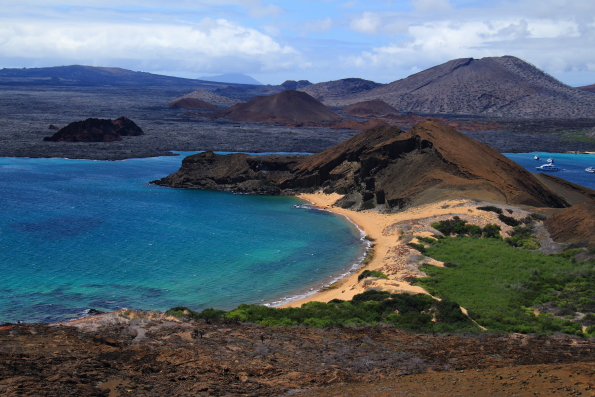 When we returned to our boat we changed to go swimming and snorkelling. Rather than wait for the second trip on the dinghy I flopped overboard and swam there in my mask and flippers. The water was colder than I had expected and all I could see on the sea bed were some dark red Panamic Cushion Star fish. Suddenly it seemed as though I had swum into a huge aquarium filled with warm water and brightly coloured fish . I was surrounded by parrot fish, trigger fish, angel fish, barber fish – so many different varieties I could not keep count and so many fish I could feel them brushing against my legs. It was only when I staggered ashore that I heard that a shark had been seen in the vicinity at the same time … 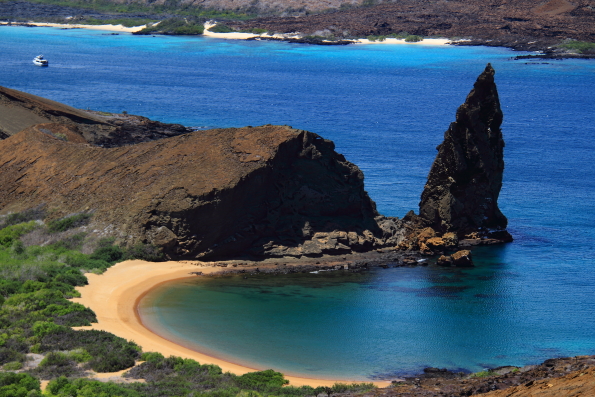 We had spent the whole day bathed in sunshine and floating on tranquil waters but as we left the shelter of the bay and turned towards Santa Cruz Island we battled with rough sea all the way. I remembered reading an article that mentioned that such extremes were common here and particularly in November and December but nothing would have deterred me from enjoying such a unique experience. As we waited on the quay to board our bus we were entertained by frigate birds swooping down to feed off scraps from the returning boats. Frigate birds are the pirates of the sea as they steal fish by grabbing a booby by the neck and shaking it so that it drops its fish to get away. 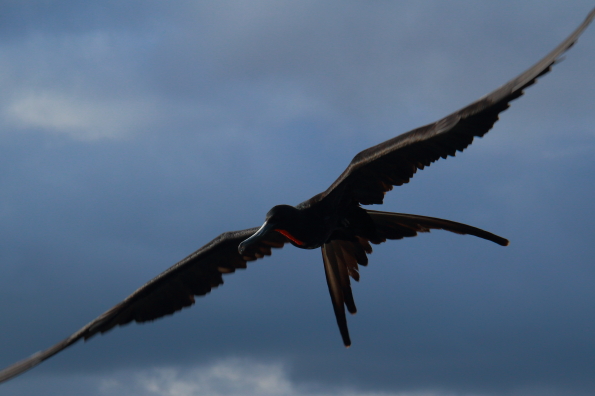 Our boat trip the next day on Narel 1 was a very different experience. Our guide, Jamie, gave us the programme for the day as we drove to the ferry terminal, he supervised us as we put on life jackets. While we waited out turn I noticed some brown pelicans roosting in the trees across the water and when I pointed them out as we set off in the dinghy we did an about turn so we could get close to them. 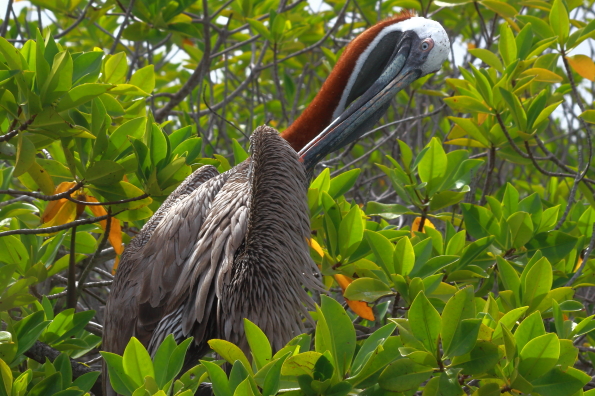 Immediately we set sail he gave us safety talk regarding what to do should the boat get into trouble and showed us where the lifeboats for the boat were stored. That really brought home to me how widespread the islands were and how great the possibility of getting stranded between them. 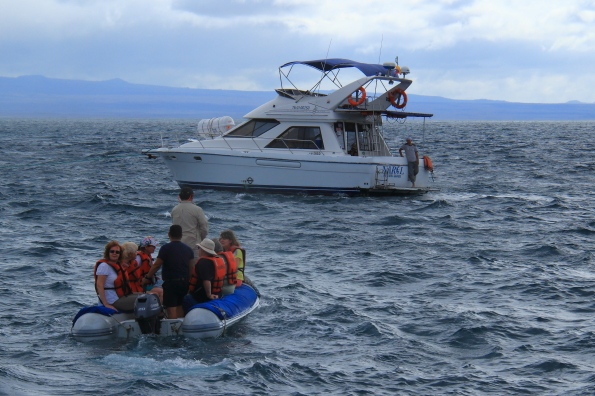 Our first journey on the boat was quite short – round Santa Cruz Island to Bacchus beach. The dinghy took us to the beach where we had a wet landing. As we walked along the beach to a lake we saw brown pelicans fishing in the sea and the tracks of a green sea turtle that had come out of the sea to lay its eggs on the beach the previous night. The sand on this islands is perfect for the eggs as it is coarse and allows air to percolate through. At the lake one lone Galapagos flamingo flamingo was wading to and fro in the water searching for food and some marine iguanas were sunning themselves on the shore. On the way back to the beach I spent a long time trying to capture a brown noddy tern balanced on the head of a brown pelican trying to steal fish from its mouth. 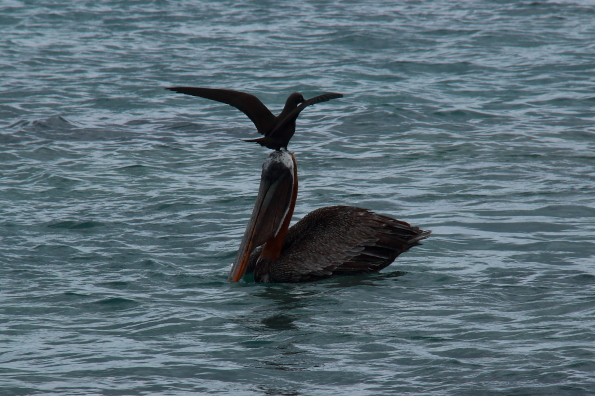 By the time I got back to the beach it was too late to join the others swimming in the sea so I got the first ride back to the boat where everything was set up for lunch. It was a lovely lunch of chicken with curry sauce, mashed potatoes and broccoli. I could not believe such a good meal had been produced in a galley the size of a cupboard that only seemed to have one saucepan. After lunch we went to North Seymour Island and as we scrambled off the dinghy we were squealing with delight at the sight of sea lions on the rocks and on the ground. It was the breeding season and there were lots of babies there. The adults were sleeping soundly while their off-spring floundered in and out of the pools amongst the rocks. 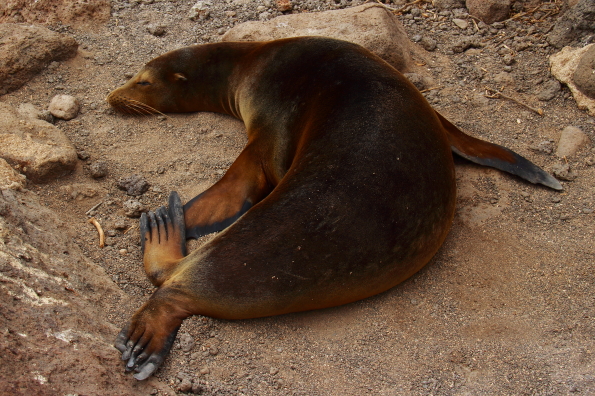 Neither the babies nor the adults were the least bit concerned regarding our presence and even though the guide said we should not go within two metres of any of the animals it seemed no-one had explained this rule to them. This absence of fear is due to the lack of predators on the islands. 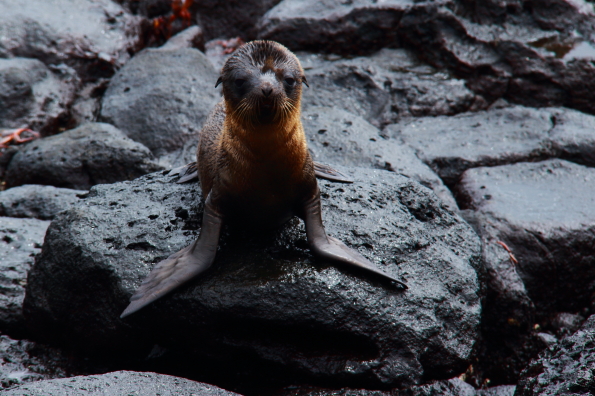 I was still puzzling over the difference between seals and sea lions, apart from the fact the latter are more gregarious when we were told we had to move on. Visits to the island are timed and there was a lot more to see. A marked path headed inland through the brown rocks to the nesting ground of the frigate birds. They were on the ground all around us and the males were inflating the red pouches on their necks and throwing their heads back to attract a female. None of the latter appeared to be interested. 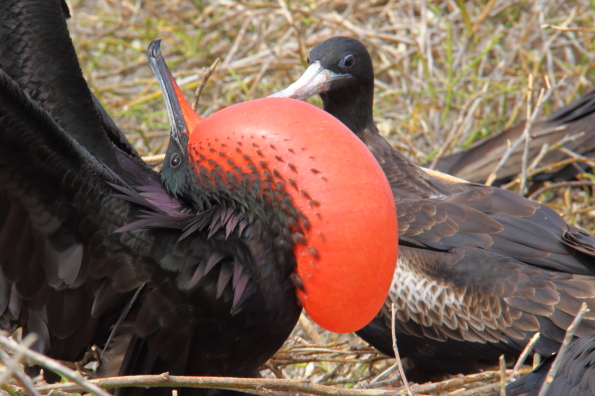 Just beyond we found some blue footed boobies a stage further in the process of pro-creation and some adults were feeding their young and one youngster, a ball of white fluff with a large black beak, was foraging for himself. 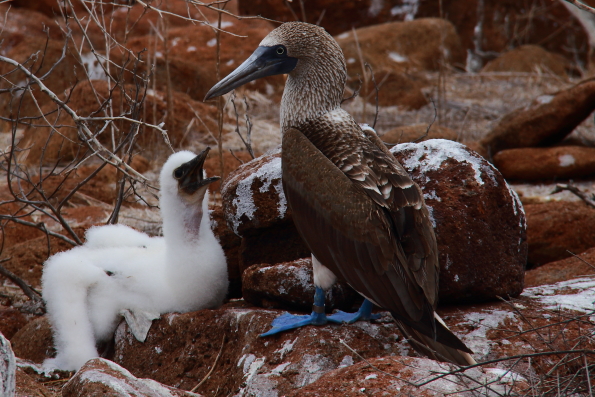 A movement among the rocks alerted me to the presence of some land iguanas who were watching our every move as we struggled to stay within the narrow track while leaning over the boundary as far as we dare to take photographs of the wild life around us. 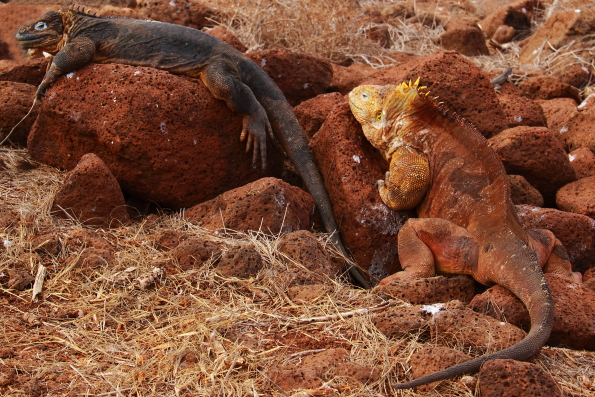 It was a very different journey back to Santa Cruz Island that day. We cruised back to the ferry terminal on calm waters enjoying a mid-afternoon snack while scanning the horizon in the hope of catching sight of a spotted eagle ray leaping out of the water. But we did not see any so we had to be content with some spooning swallow tailed gulls. 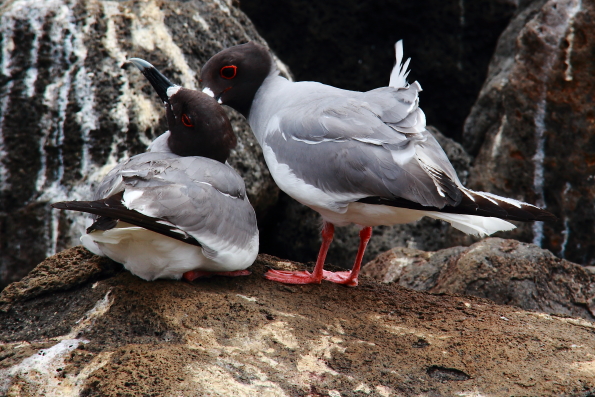