A Fruitful Visit to Otavalo in Ecuador

Ecuador Highway 35 between Quito and Otavalo passes through some of the most spectacular scenery in Ecuador. On one side the land drops away into the valley and on the other side peaks of the Andes tower above. Workmen balanced on these heights repairing the ravages of recent landslides and protecting them against future rainy seasons. This road forms a section of the Pan-American Highway that covers a total of nearly 30,000 miles stretches from Alaska and Canada to Chile, Argentina, and Brazil. Originally conceived as a single route in 1923 it has grown to include a large number of designated highways in participating countries and it is a mixture of state owned and privately owned roads. In Ecuador it is privately owned and as there is no road tax in Ecuador it is financed by the payment of tolls. We stopped to enjoy the panorama of this road clinging to the side of the mountains. 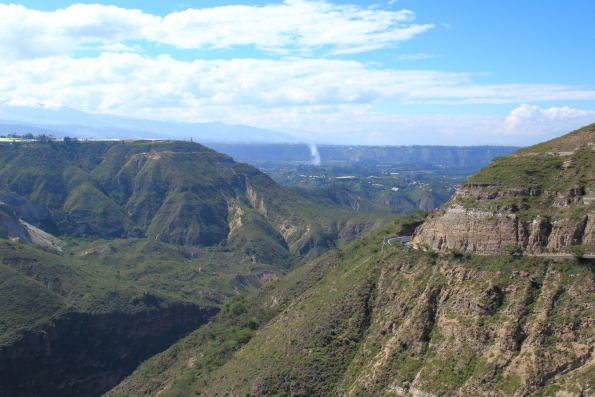 As we continued on our way the scenery around us changed constantly from wooded slopes, scars of limestone and fields of every imaginable crop. The volcanic soil of Ecuador and its many micro-climates means that a huge variety of grains, fruits and vegetables can be grown all year round. When we emerged from the mountains above Lago San Pablo, the largest lake in Ecuador, we had our second stop and I was delighted to discover not just a café for refreshments but also an outlet for a local industry, the famous Panama hat. 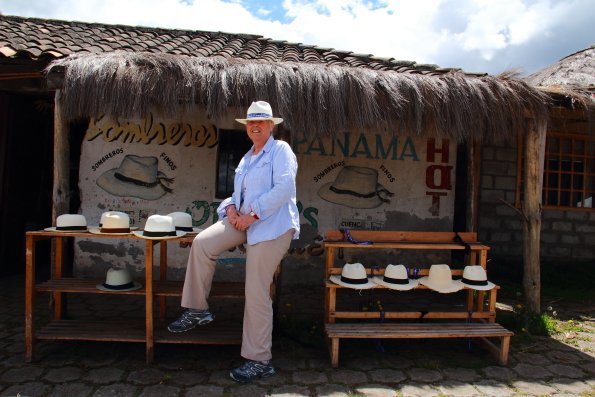 Despite being called the Panama hat it originated in Ecuador and the tradition of hand weaving them has continued since the sixteenth century when the Incas wove them from a fibrous plant, paja toquilla, indigenous to the coastal regions of Ecuador. Thanks to their use by workers on the Panama canal and photographs of President Teddy Roosevelt wearing one (apparently he did not remember that he had acquired it in Ecuador) it became known as the “Panama hat” and achieved world-wide popularity and remains fashionable to this day. Ecuadorians would love to revert to the original name “sombreros de paja toquilla” but it does not have quite the same ring to it even if you did know how to pronounce it. I was keen to buy a genuine Panama hat and was wary of inadvertently purchasing a cheap copy or an expensive imitation which are now flooding the market. In the small, simple shop by the roadside I found exactly what I was looking for – a genuine hand-made Panama hat. As soon as I stepped over the threshold a hat was placed on my head and a band was tied round it to secure it. They do not come in sizes and I had a choice of colourful bands. I chose a mid-range hat that I was assured would resist water and fold up. Our guide was cautious regarding the latter as he said it only worked if you knew exactly how to do it. The demonstration had been so quick and slick I had no idea how it was done so I packed it unfolded filled with socks and scarves. I had acquired the latter from a lovely Otavaleño lady who had joined our bus, sung us a song and then sold us her wares. 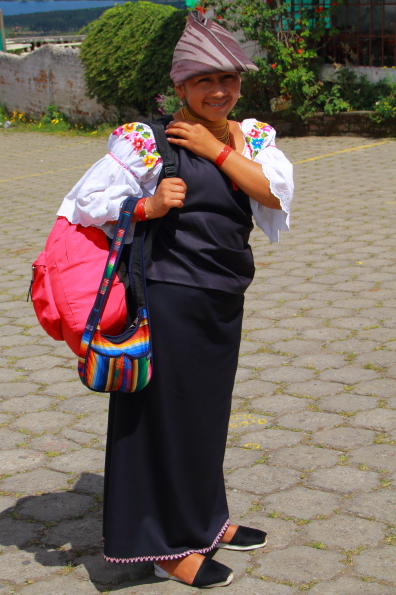 When we arrived in Otavalo we had a walking tour of the town which seemed to be one large market place. Small stalls, piles of local produce on wooden carts and the pavements were everywhere. We stopped outside an open shop front to try one of the local fruits – a small sweet plum. Ecuador has several different types of plum and also passion fruit (taxos) as well as mangoes, strawberries, pineapple, bananas just about every fruit you can think off. The bananas had a freshness I had never experienced before and the pineapple was exquisitely sweet. Two fruits I had not come across before are the tree tomato and guanabana Fresh fruit. I tried both in juice form and they were delicious. We strolled around the market entranced by the stalls piled high with exotic fruits and vegetables. 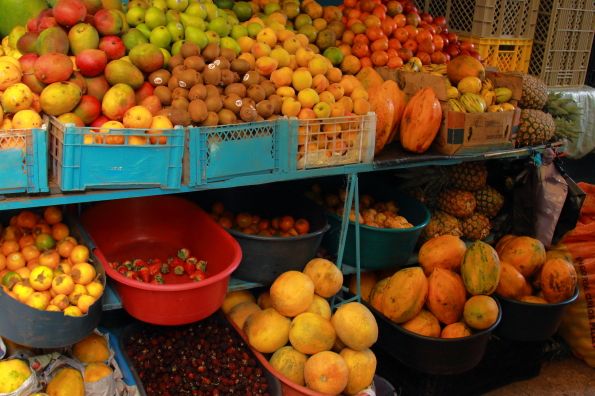 We also strolled through the meat section where we discovered that the Ecuadorians are very fond of pork and in particular the skin and that some restaurants specialise in dishes of pork crackling. 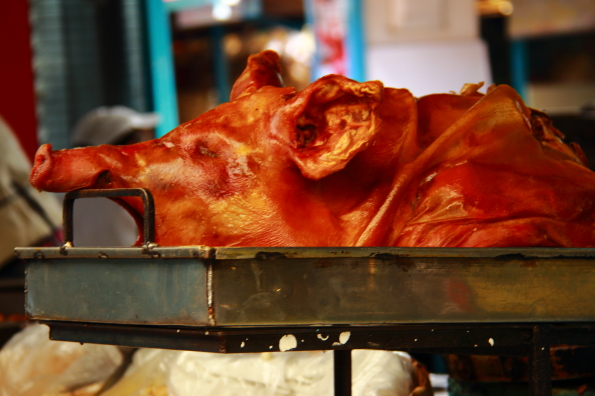 Our tour finished at the Plaza de Ponchos which was throbbing with people and ringing with the music of the pipes of pan. I decided to retreat to the quieter Parque Bolivar enticed there by the sight of the steeple of the church of San Luis. When I entered the church my attention was immediately drawn to a stunning painting framed in an archway, its Renaissance architecture and Baroque altar. 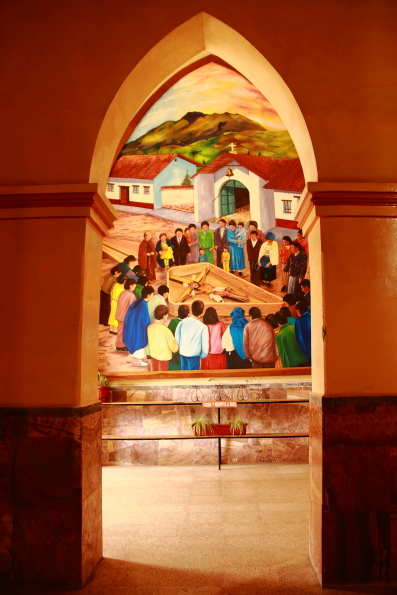 The square is dominated by a huge statue of a local Incan hero Rumiñahui who not only went to war against the Spanish but was also successfully championed by the locals when an attempt was made to replace this statue with one of Bolivar who are proud of their Inca heritage and still speak their language. 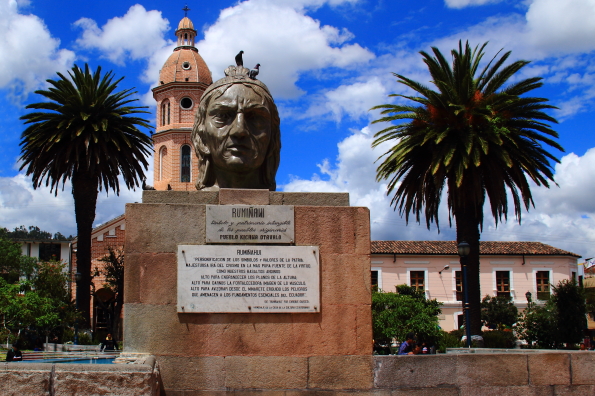 Strolling round the square I discovered the true beauty of Otavalo, its people, the Otavaleños. They still wear their distinctive dress with pride – the intricately embroidered blouses are set of by many strands of beaded necklaces usually gold, while the men have long, braided hair and wear calf-length white trousers, ponchos and sandals. Even school children wear their traditional dress and I had a lovely moment when I met three teenage girls who giggled charmingly when I asked if I could take a photograph. 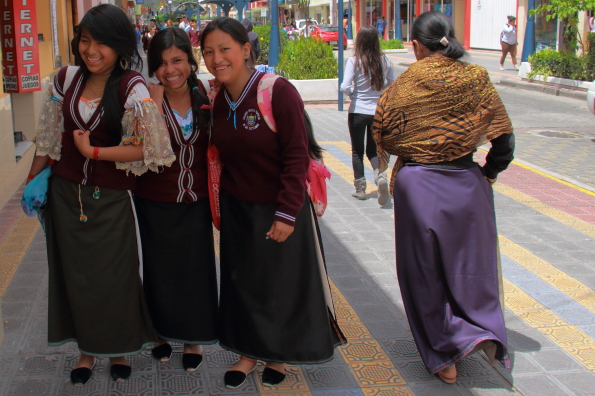 Otavaleños have become very prosperous and in the past ten years they have been travelling the world exporting their Andean culture. Under the Incas Otavalo became an important administrative centre and new crops and animals were introduced to the area but after the Spanish conquest, Ecuadorian land was divided up and given to the Spanish. It was during this period that Rodrigo de Salazar set up a large weaving workshop (“obraje”) on his land and was soon running a successful business employing hundreds of workers producing textiles. New tools and fibres were introduced from Spain to the weaving industry and this workshop became the most important in South America. This tradition has continued and the introduction of weaving techniques from Scotland during the 1960s and the creation of a new material that became known as Otavaleño cashmere created a new textile boom in the area. Products from Otavalo are found in markets around the world and many of them grace the stalls of the famous artisan market in the Plaza de Ponchos. By the time I got there it was lunchtime and the market was very quiet. My companions had done their shopping and gone off to the local supermarket to stock up on chocolate made by Pacari one of the top producers of chocolate producers in the country and the first to produce organic chocolate made entirely in Ecuador using only Arriba Nacional cacao, the plants native to Ecuador that yield a bean classified as “fino de aroma” that makes excellent chocolate. I was politely invited by stall holders to examine their wares – an amazing variety of brightly coloured woollen goods including tapestries, blankets, ponchos, sweaters, scarves and hats. Hammocks were strung between stalls, blouses and jewellery hung from them, paintings decorated them and pottery was piled on top of them. 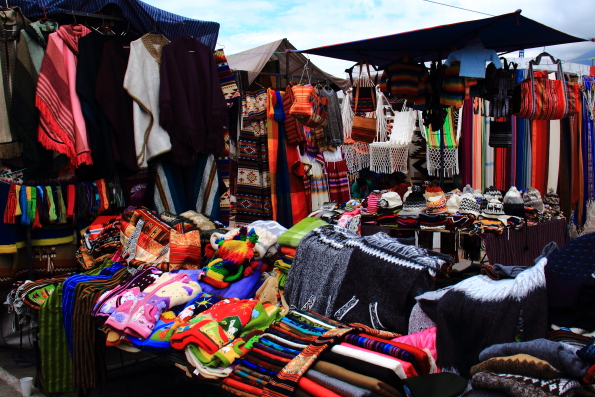 We left Otavalo and drove up into the mountains and then turned off the main road and bumped along a track to an eco-hotel and retreat, Sacha Ji, http://www.sachaji.com/ our venue for lunch. Situated 3000 metres above sea level in the Imbabura Province, named after the Imbabura Volcana its setting is stunning, surrounded by glorious gardens and overlooking the Lago del San Pablo as well as the volcano itself. Our lunch included a civeche http://www.destinationecuador.com/food-in-ecuador.html made from palm hearts and lupin seeds. Civeche is a traditional Ecuadorian dish and generally made from sea food but this version was delicious. 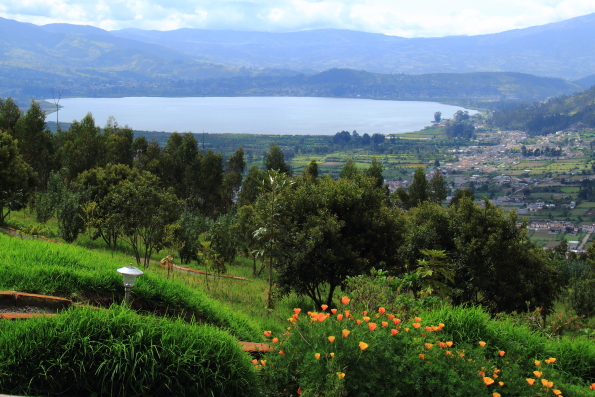 After lunch, as we drove back to Quito, I cradled my precious Panama hat in my lap as I mentally reviewed colourful images of the day. When I came back to Ecuador, which I would, I would buy a superior version of the hat, one that was water resistant and when rolled up would pass through a ring.
**************************************************************************************
Our stay in Quito was part of a tour organised by Solos Holidays and their local representative in Ecuador, Ecuadorian Tours. We stayed at the Hotel Quito in the north of the city which enjoys spectacular views of the Andes. This area was once a very popular place to live until accidents involving aircraft landing and taking off from the old airport that was close to the city centre made it less desirable. Now that a new airport has been built outside the city its popularity is increasing again. The Hotel Quito is state owned and the base for exchanged programmes with students from Venezuela so it can be noisy at times but the rooms at the far end of the three-storey extension are very quiet. The hotel has a good sized swimming pool, an outdoor spa and a gymnasium. The restaurant and bar are on the seventh floor with great views across the valley to the mountains beyond. We enjoyed a fabulous buffet breakfast every morning with a great variety of fresh fruit and different fresh fruit juices every day supplemented by freshly cooked eggs. Flights with KLM via Amsterdam offer the option of flying home from Quayaquil after a visit to the Galapagos Islands.