“Go ahead, stroke it”. I looked suspiciously at the brick wall beside me and wondered why I would want to touch it. Abbie encouraged me again so I peeled off my glove and ran a tentative finger-tip across the rough surface. But it was not rough it was soft and furry because of the horsehair that had been used in medieval times to bind the clay they had used as a building material. We really were exploring the fabric of Chester cathedral led by our enthusiastic guide Abbie. 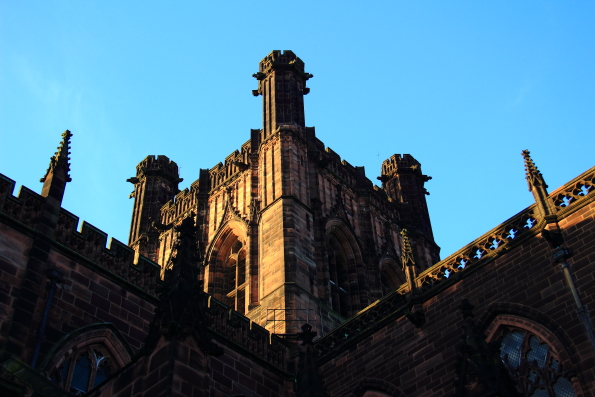 Her heels had already disappeared round the curve of the narrow winding staircase spiralling above me so I gripped the rail and hastened after her until we emerged in the gallery behind the Romanesque section of Chester Cathedral our next stop on the Cathedral at Height tour. We were standing right beside some old stained glass windows and could see how the soft lead had buckled under the weight of the glass creating a wavy effect. Below us through the spaces between the pillars we see two sections of the huge organ that had towered above us before we started the tour and now one section of the pipes was just a few metres away. The cathedral has just embarked on a programme to raise money to restore the organ and it includes daily recitals. The aim was to finish our tour before the walls began to reverberate to its notes. 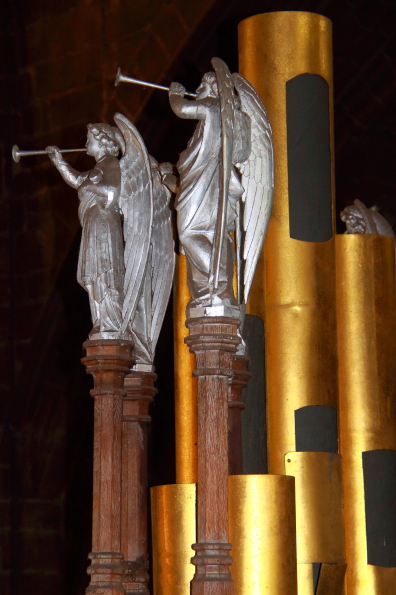 We left the gallery and climbed another flight of steps to another gallery where we had a close up view of the unique cross construction of the roof and the wooden panelling enclosing the area that had been treated to look like stone from below. We continued up the steps into the bell tower pausing to explore the small museum about bell ringing in the cathedral in the bell ringers’ area. We then continued up to the belfry where all the bells had once hung. Nowadays the bells are housed in a separate bell tower that was built in 1975 when the medieval tower could no longer support them. This still houses two seventeenth century bells (1606 and 1626) that are still in use today for services and to mark the daily curfew, rung between 8.45pm and 9pm every night since the fourteenth century. It was a warning of the imminent closure of the city gates aimed particularly at the Welsh because it is still the law that a Cestrian can shoot a Welshman with a bow arrow if he finds him inside the city after the gates have been locked. 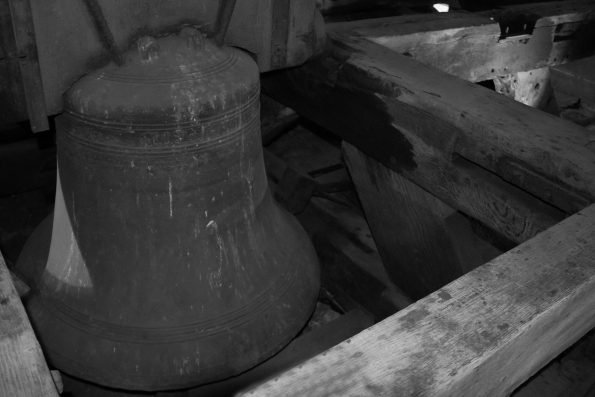 There were some open windows on the way that are now netted over. We climbed up more steps and came out on the roof of the bell tower which has four small towers at each corner and four aspects of the city below. We could see the medal shaped flower beds in the garden of remembrance in the grounds of the cathedral dedicated to the Cheshire Regiment. And we had the best view of the city’s Town Hall. 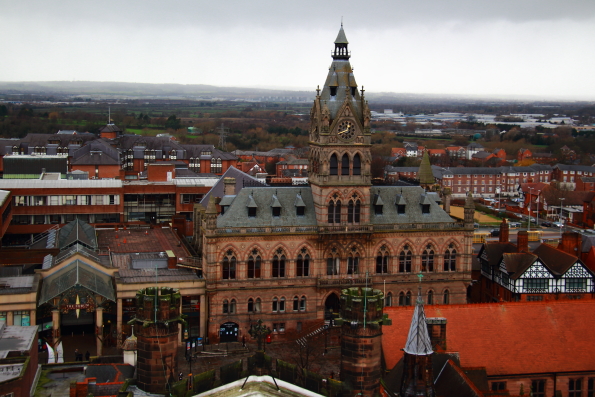 On our way down we stepped through a narrow doorway into a gallery above the beautifully carved choir stalls dating from 1390. They were empty, a timely reminder that the organ recital was about to start and we should move on. After following a short path through a roof space and descending one last long narrow winding flight of stairs we emerged through a doorway into the cathedral as the first majestic notes of the organ resonated around us. 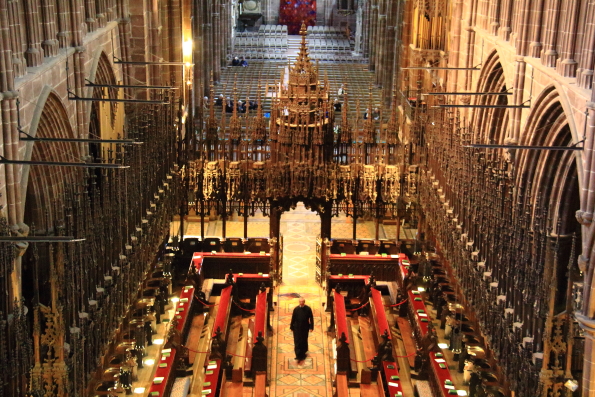 I lingered in the entrance and listened for a while enjoying the music and the emptiness. Two days earlier when I had arrived in the city I had visited the cathedral attracted by the events that were currently taking place inside. I had strolled round the cloisters examining the Christmas trees that lined the corridors. A competition to choose the best was in progress and it was difficult to decide if I preferred the sophisticated entries from local businesses or the charm of a tree decorated by local school children. I watched as a volunteer in his red cloak repaired the damage done by some over-enthusiastic toddlers – the cathedral like many English attractions relies on them to enhance the experience of their visitors. 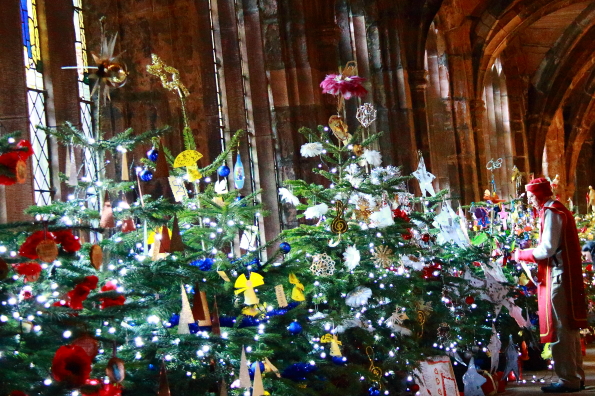 I moved on to the display of scenes from Narnia re-created in one of the chapels. I had seen Aslam in the entrance and was keen to step through the wardrobe again to this imaginary land created by C S Lewis. I was not disappointed as it was beautifully done appealing to both children and adults. Finally I made my way to the Refectory where they were serving hot drinks and other refreshments against a back drop of ‘forever winter never Christmas’ the habitat of the Snow Queen who had ruled Narnia. A past canon of the cathedral was also a famous author and creator of a fantasy world – Charles Kingsley wrote the Water Babies which was both a fairy tale and a comment on the times he lived in when small children were used to sweep chimneys. 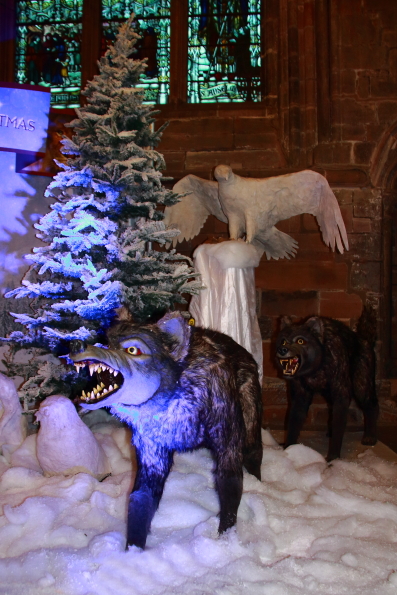 Eager to explore the city of Chester but not sure where to start I began by doing a circuit of the cathedral. As I was about to enter the Abbey Gate into Abbey Square once the site of the original monastery in the town I saw a bronze statue of a small elephant, Janya. This life-like creation by the sculptress Annette Yarrow was a gift from Chester zoo to the people of Chester in 2010. Its name which means life in Hindi was chosen by the Cestrians. As I left Abbey Square I saw a flight of steps onto the city walls walk and decided to walk the walls. 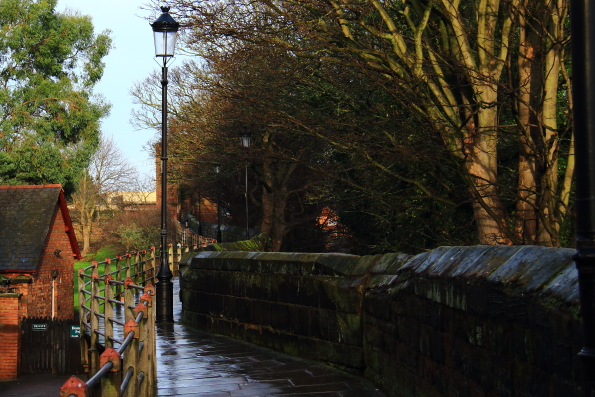 I passed the Eastgate clock on the bridge that spans Eastgate, the main road through the town. Below me people criss-crossed the pedestrian precinct browsing the shops on either side housed in the ‘Tudor’ buildings for which the town is famous. In fact only three genuine Tudor buildings remained in the town after it was sacked during the Civil War and the rest were built by the Victorians. The famous clock above me was originally intended to celebrate the visit of Queen Victoria to Chester during her Diamond Jubilee celebrations but lengthy deliberations regarding what to build and how to build it meant that the clock was finally finished and unveiled 2 years after her visit. 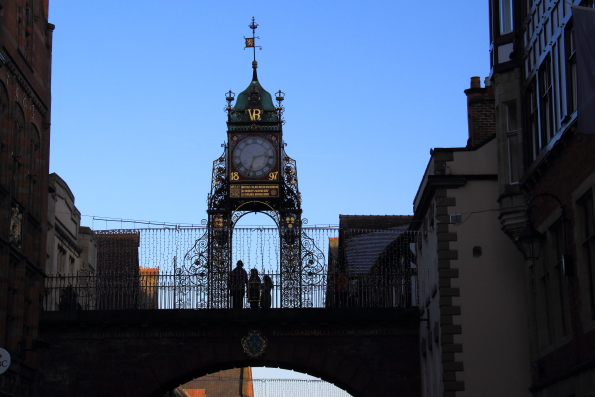 I continued along the walls to Newgate an arch bridge carrying the walkway of the city walls over Pepper Street. It was built in 1938 to relieve traffic congestion in the city and involved making a new breach in the city walls. Designed by Sir Walter Tapper and his son, Michael, the bridge is constructed in red sandstone with towers on each side containing mock loops (unglazed slit windows) and topped by hipped roofs. There are flights of steps on each side leading up to the towers and on to the walkway across the top of the bridge. The structure is decorated with carved shields and Tudor roses and it is generally felt that its design fits in well with the medieval walls. Newgate looks over the amphitheatre and the Roman gardens and I left the walls here to visit the gardens and see the place where the walls were breached during the Civil War when Chester was defeated by the Parliamentarians. 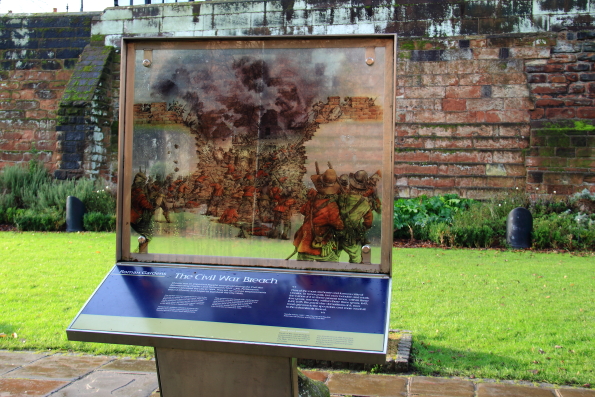 I could have walked through the gardens to the river but decided instead to visit the ruins of the Roman amphitheatre on the other side of the road. Not much remains of the original structure as it is thought the citizens of Chester plundered the structure to build their city walls. A large mural on the site replicates the structure as it would have looked when it was used for military training, gladiator fights and the punishment of erring citizens. This, the largest Roman amphitheatre in Britain, was built outside the city walls as audiences were not confined to citizens of the city. 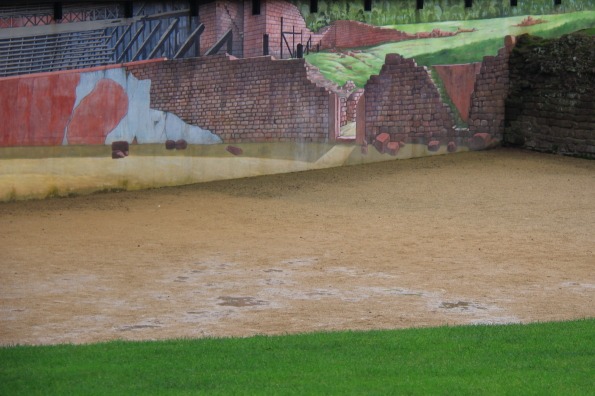 On my way back into the city centre I walked through one of Chester’s famous Rows. These are a series of medieval walkways with shops on two levels in the centre of the town around the four original thoroughfares of Eastgate Street, Watergate Street, Bridge Street and Northgate Street. Open to the street on one side and the top level can be reached from stairs at ground level. The origin of this unique system of covered walkways is not certain but records show that the Rows have existed at least since the late 13th century. Similar businesses would be found in the same Row for example the area on the east side of Northgate Street was known as Ironmonger’s Row. The early Row buildings probably had an elevated gallery, but were not part of a continuous system so access to the upper Row would have been by many different flights of steps. During the fourteenth century these individual galleries were gradually linked to form continuous walkways no doubt through the co-operation of adjacent property owners wanting to make their premises more accessible. 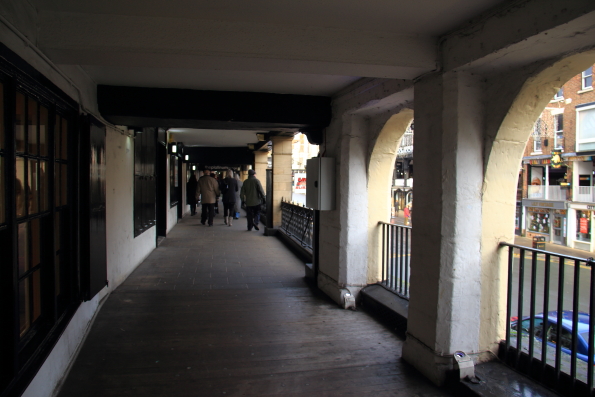 Back in the city centre I set off to find Spud U Like, not because I was hungry but because it is the site of some famous ruins in Chester, a Roman hypocaust or heating system built below ground level. It is thought it may have been built to heat the baths in an officers’ club on the floor above. It was thrilling to think that where people now sit to enjoy a baked potato Romans would have been fuelling a furnace while officers of the Twentieth Legion relaxed in the warmth of the water it heated. My visit was enhanced by information boards thoughtfully placed around the room by the proprietor David Thornhill. 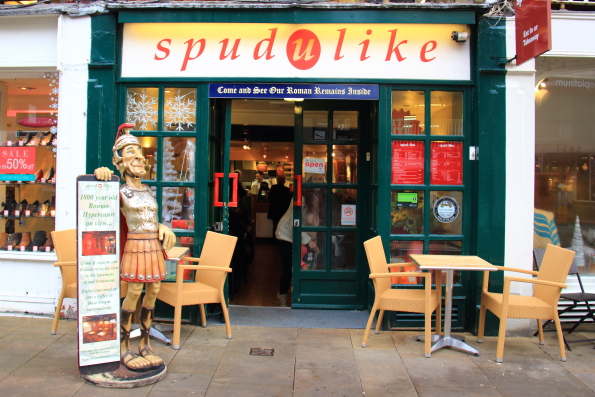 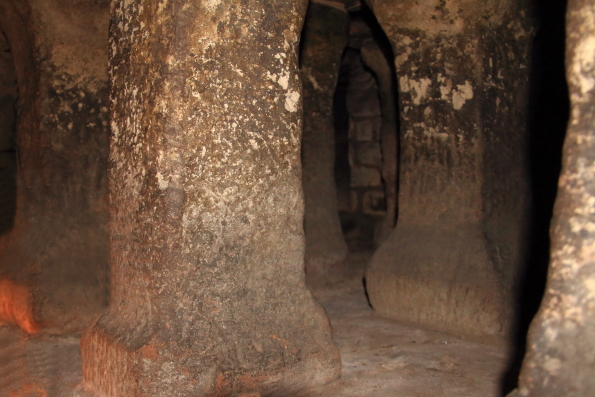 Next stop the River Dee where at one time the boats carrying goods for the traders on the Rows would have entered the city but now the only boats on the water are pleasure boats for visitors. After strolling along the waters’ edge for a while I found another flight of steps that took me back onto the city walls and I walked past the façade of Chester castle and the racecourse. My final destination was the church of St John the Baptist that overlooks the River Dee. This pre-Conquest church was founded in 689 AD by Ethelred and is steeped in history as well as being an impressive example of Norman architecture. It was once the cathedral of Chester until that honour was bestowed on the Abbey Church of St Werburgh which is now Chester Cathedral. 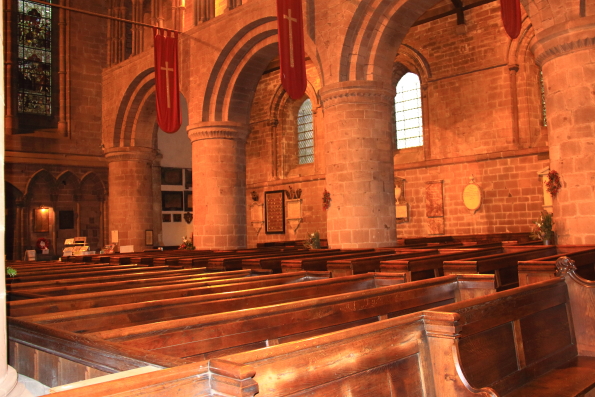 Dusk brought an end to my wanderings but there was still time to explore the many shops as I made my way back to my hotel. I noticed a poster advertising the presence of a town crier during the summer months, there was also the Chester zoo to visit and the cathedral would have a new programme of events. A return visit was a definite possibility.
***********************************************************
My short break in Chester was organised by Solos Holidays. We stayed in the Crown Plaza Hotel cunningly concealed in a multi-storey car park. The bedrooms were comfortable, the public rooms functional and it was very convenient for the town centre. I travelled to Chester by train starting on the London Midland service that connects with the Virgin Trains service from Euston to Chester at Milton Keynes Central.