An Intrigue of Iguanas in Guayaquil, Ecuador

When we drove into the city of Guayaquil my first thought was thank goodness we are only staying here for one night. Three hours later I felt very differently about the largest city in Ecuador. This city has a fascinating history which is reflected in some fascinating buildings and monuments and it also has a park full of iguanas. 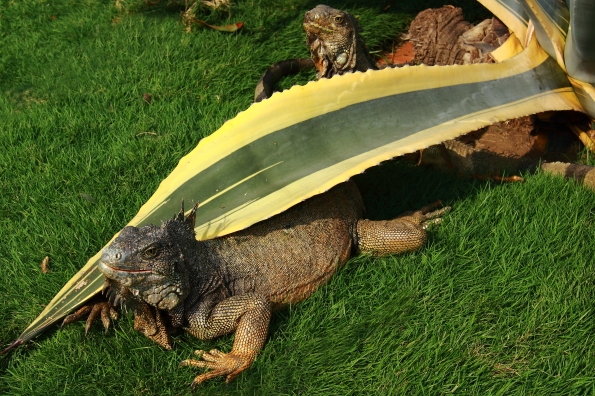 According to legend the name Guayaquil was derived from Guayas (the great Puna Indian chief who fought bravely against the Incas and then later against the Spanish), and Quill, the wife of Guayas. It is said Guayas killed his wife and then deliberately drowned rather than being captured by the Spanish conquistadors. Some historians claim the name of the city comes comes from the words ‘Hua’ or land, and ‘Illa’ meaning beautiful prairie and ‘Quilca, ’ one of the Guyas River’s tributaries where the Quilca tribe lived until being wiped out in the 17th century. So Guayaquil literally means ‘the land like a beautiful prairie on the land of the Quilcas.’ There may be doubt about the origin of its name but there is no doubt that the first settlement here was established on the lowlands around 1534 but moved to the Santa Ana hill in 1547. 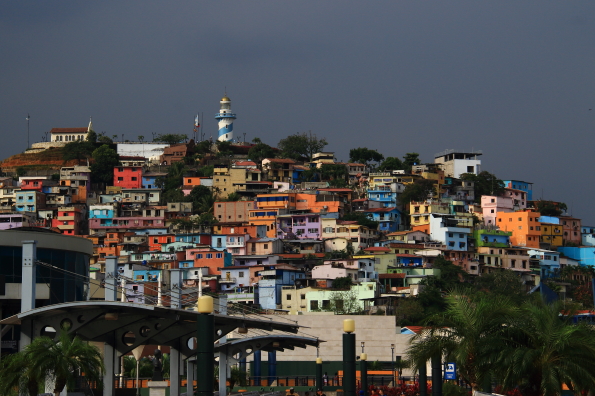 Seminario Park, our first stop, was originally established as Plaza de Armas in 1695 in front of the old Mother Church. This lovely church was converted into a cathedral, Catedrale Metropolitano in 1838. We paused to admire it and listen to the band playing outside – they love their music in Ecuador. 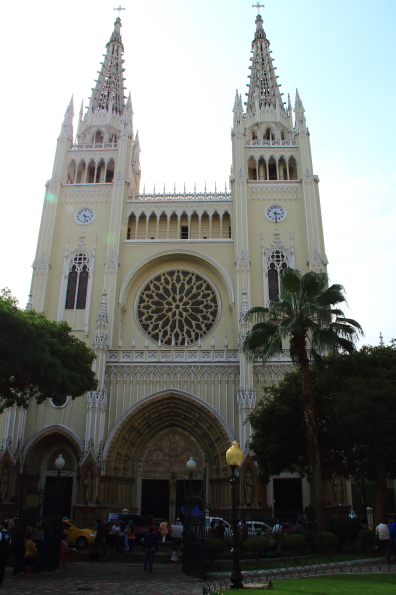 By the mid-nineteenth century the plaza had become known as the Parque de la Estrella named after huge eight-pointed star effect on the paving stones. By the end of the century it had become a civic rallying point, a venue for festivities and the site of an equestrian statue of Simón Bolívar to commemorate the independence of Guayaquil. This led to it adopting a new name, Plaza Bolivar. Then in 1895, thanks to a large donation from Don Manuel Suárez Seminar the park was fenced and adorned with a gazebo and benches and given its present name Parque Seminario. At that time the park was on the edge of the city and had become a favourite place for the iguanas from the grasslands around to hang out. They are still there and have learnt not to stray beyond the boundaries of the park. 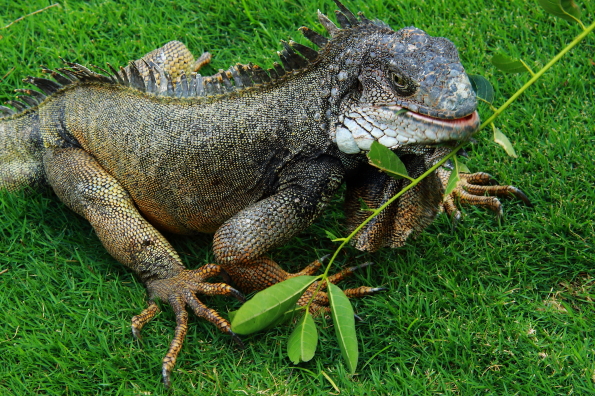 We ran around the small park like small children at a zoo taking photographs of the iguanas. They were everywhere, stretched out along branches, cooling down in the small lake, sunbathing on the plinth of the Monument of the Boar (donated by the Chinese colony that lived in the city) and digging holes in the flower beds.

Christian, our guide, finally called us to order and we set off through the town towards the river via the Municipal Palace Guayaquil or the City Hall (also known as Cabildo de Guayaquil) where the Mayor of the city is based. This beautiful building which has recently been restored is considered one of the most important buildings in Ecuador. Designed by Maccaferri it was built to replace the old colonial town hall that was built in 1817 and had lasted 112 years until it had to be burnt down in 1908 when the bubonic plague swept through Guayaquil. Work began on the new town hall in 1924 but had to be suspended the following year when the funding dried up. Work began again in 1927 and it was finally completed in 1928 and opened in 1929. Built in the tradition of existing buildings at the time this modern Renaissance style building with its impressive colonnaded façade has stood the test of time and survived riots and earthquakes. 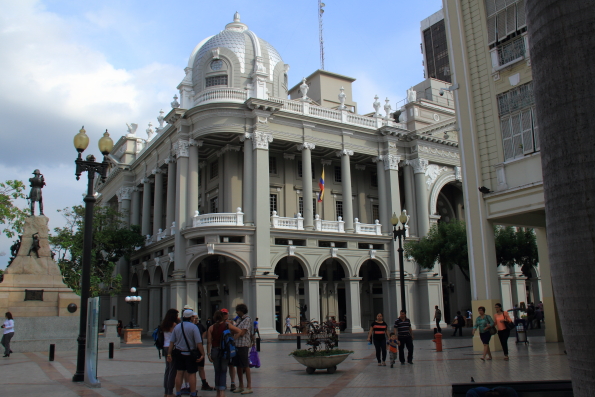 We joined the The Malecón 2000 at its northern end. This pedestrianized area runs between the busy Malecón Simón Bolívar and the western bank of the wide, yellow-brown River Guayas and stretches for a mile and a half. It is so well designed it is easy to forget you are in a busy city centre as you stroll along the wide paved esplanade dotted with trees, sculptures, gardens, an antique railway carriage and historical monuments. One such is the Moorish Clock Tower. The clock itself is much older than the tower and was imported from England in 1842 using money loaned to the city by a rich Spanish merchant who wanted to do something good for the people of Ecuador. At first it was housed in a small tower as Guayaquil had just suffered its worst yellow fever epidemic ever. Nevertheless the clock was well received by its citizens – now they could all tell the time. In 1903 following the decision to burn down the City Hall the tower was moved away from its site nearby and could not be heard so clearly in the city. The clock did not only indicate the time but also sounded a warning if pirate ships were in sight so it was decided to add two more storeys to it. Three parts made of carved wood were therefore added to the existing structure and beautiful though it was it could not withstand the ravages of time and the sea water. It was demolished and replaced with a new tower. Today the clock is housed in a lovely Moorish style brick tower just before four sculptures dedicated to the four elements with fire and earth also serving as timber and metal look out towers crowned with awnings that resemble sails. 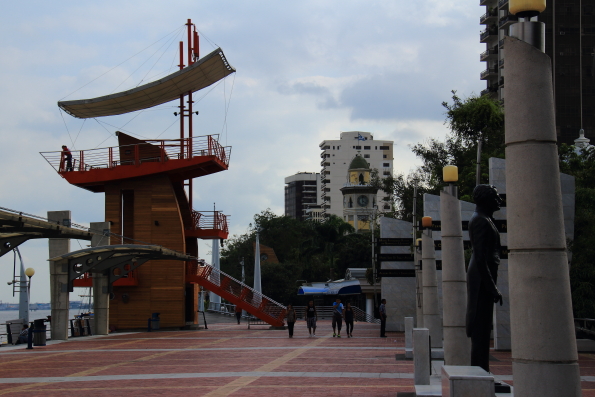 As we strolled through the Plaza Civica we could see the long National Unity Bridge (Puente de la Unidad Nacional). In fact it is part of a complex of four individual bridges stretching over two kilometres that cross the Daule River and the Babahoy River which combine immediately downstream to form the Guayas River. Each river is crossed by two parallel bridges that connect the city of Guayaquil with the suburb of Durán to its east, and by extension to the highland part of Ecuador. We had to stop to admire the centrepiece of the plaza, Hemicolo de la Rotonda that commemorates the famous encounter between José de San Martín and Simón Bolívar in 1822. These two generals are celebrated as the liberators of South America with this huge semi-circular monument that shows them shaking hands against a background of tall marble columns topped with South American flags. 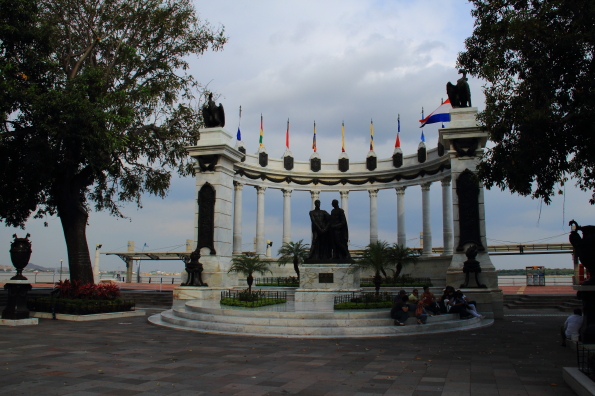 We continued on our way passing a succession of botanical gardens, fountains and ponds each of them themed on a historical period or habitat in Ecuador such as the Plaza de las Bromelias that is planted with vegetation that resembles the cloud forest. We stopped for an ice-cream thoughtfully placed at a point where it is time for a break and a chance to absorb the sights we had seen before continuing north towards Santa Ana whose colourful buildings we could see clothing the hillside and surrounding the lighthouse at the top. It was also a good opportunity to appreciate the scenery. 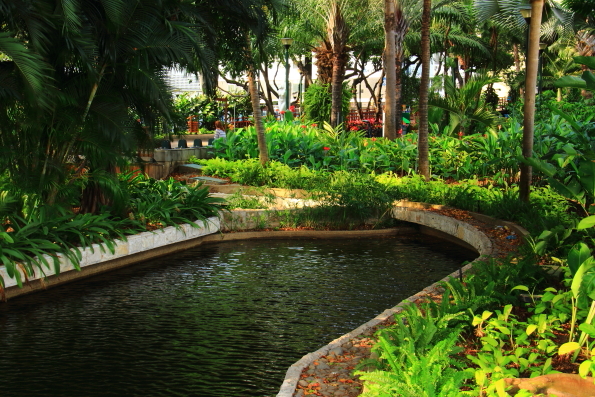 At the northern end of Malecón 2000 we entered Las Peñas the oldest neighbourhood in the city at the base of Santa Ana. This area has been restored and we wandered along the narrow cobbled streets admiring the colourful buildings and browsing art galleries and boutiques. We did not have time to climb the 465 steps going up Cerro Santa Ana going up to the chapel of Santa Ana and the lighthouse both of which were built in 2002 on top of the foundations of a seventeenth century fort. At the highest point of Santa Ana Hill, Plaza Mirador the Fortini, tourists can enjoy the panorama of Guayaquil and its three rivers below. A city I had misjudged so badly on arrival. And I will always remember the park where iguanas observe human behaviour. 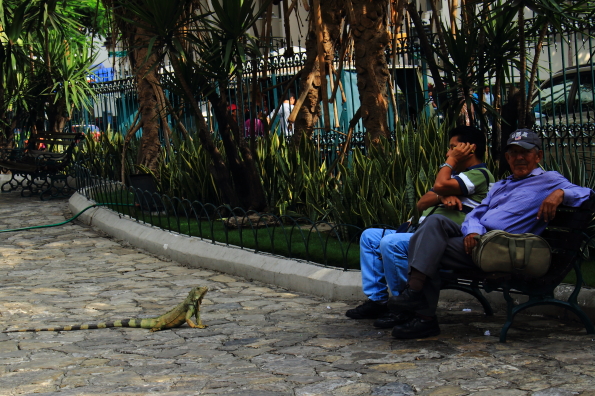