An Inca Trail to Cuenca, Ecuador

A line of mist shrouded figures marched across the horizon above me towards a round stone structure that dominated the surrounding countryside. Were they ghosts of the Cañari or the Incas both of whom had lived and worshipped here? As the mists cleared I realised they were nothing more than a crocodile of tourists armed with walking poles and cameras following their guide around the Ingapirca archaeological site in Ecuador. 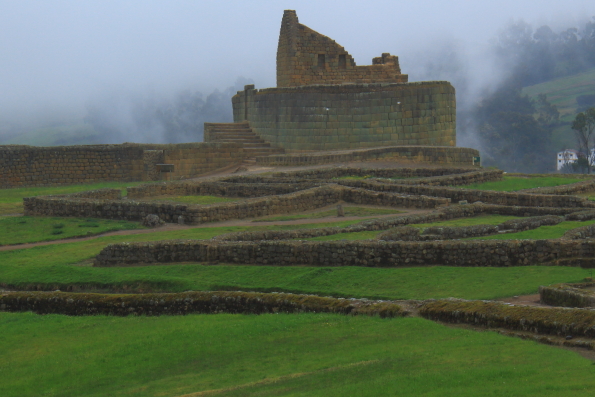 Generally associated with the huge and splendid Machu Picchu in Peru here at Ingpirca I learnt more about the Incas as a people. When they met with resistance from the Cañaris, one of the most important of several indigenous tribes who inhabited the territory that is now Ecuador before the arrival of the Inca Empire they tried to absorb them into their own culture. But they fought fiercely to protect their own culture (which still survives today) and never abandoned their desire to be free of the Incas. Soon after the Spanish leader Francisco Pizarro arrived in Ecuador he discovered this and formed an allegiance with the Cañaris who fought alongside the Spanish in the battle of Sacsayhuaman in 1583 when the forces of the Inca Empire were defeated. The tolerance of the Incas may have led to their downfall but it also left some interesting questions amongst the ruins of Ingapirca. The Incas were not here long enough to build a huge temple instead they built a small temple to worship the sun alongside the original site of a temple built by the Cañaris to worship the moon. The elliptical shape of this temple contrasts with the more usual angular architecture and is evidence of their respect for the local culture. Once the Incas had overcome resistance they would first concentrate on residential and military structures and then bring thousands of people into the area to educate the locals and teach them their religion. Their building techniques were highly sophisticated, carefully cut blocks of stone were held together by mortar although the blocks used to build the temple were so well crafted they did not require mortar to keep them in place. Although to a large extent the Incas did replace Cañari architecture with their own, they not ignore their impressive achievements in astronomy and agriculture. We were intrigued by a large stone with 28 holes that was thought to be used as a lunar calendar. The holes filled with rainwater that told the date by different reflections of the light from the moon throughout the month. 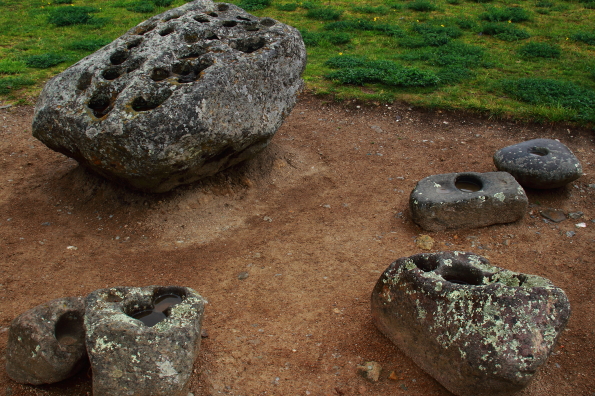 Shortly after the defeat of the Cañari, the Inca commander, Tupac Yupanqui, reputedly ordered the construction of a grand city – Pumapungo, “the door of the Puma” – whose magnificence was to challenge that of the Inca capital of Cuzco. By the time the Spaniards found this legendary city all that remained were the ruins of a combination of Cañari and Inca buildings set on a series of terraces around a small hill on which a castle would have stood. 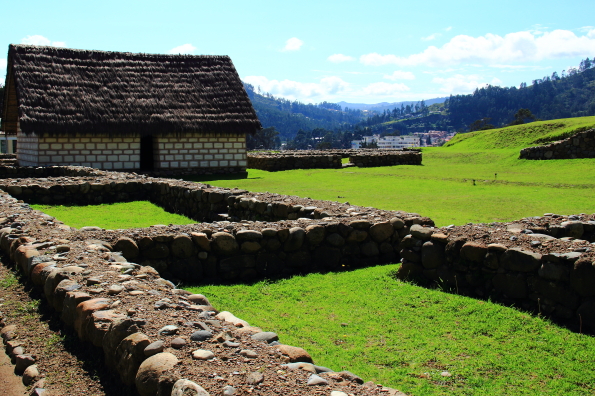 We stood there the following day enjoying a view of the modern city of Cuenca that surrounded us and the botanical gardens below us. The gardens, the ruins and an aviary form the Pumapungo Archaeological Park – This park was a project undertaken by the Central Bank of Ecuador after they acquired the site of the ruins in 1981. Here visitors can see the foundations of the barracks and other buildings that formed part of the city of Pumapungo and the entrance to a tunnel more than a hundred feet long that served as a mausoleum to symbolize the underworld. The park includes thousands of different plants in its gardens and crops related to sun worship are grown on the terraces. 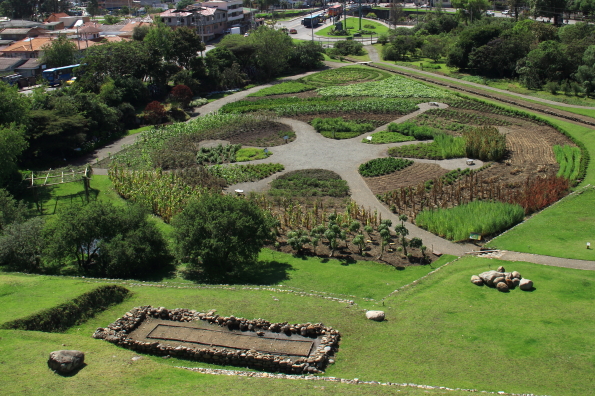 As time was short we did not have time to visit both the park and the adjacent Pumapungo Museum housed on three floors in a large wing of the Central Bank. This meant we had to forego an extensive collection ranging from 50,000 sucre bills to shrunken heads. But having explored Cuenca’s past we wanted to explore its present and to discover why it has become a hotspot for expatriates and retired people. Most of them seemed to be enjoying the sunshine in the main plaza Abdón Calderón, when we arrived there. Here we found both one of the oldest churches in Latin America, the Sagrario Church or the old cathedral, and one of the largest churches in America, the new cathedral or the Cathedral of the Immaculate Conception . 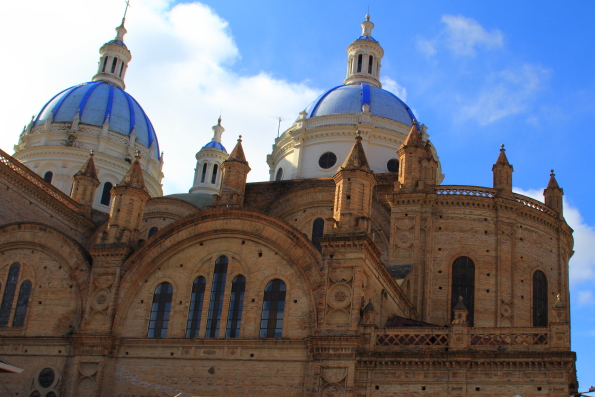 The former was built in 1557 using blocks from the palace at Pumapungo but in 1981 it ceased to operate as a cathedral and now houses a museum. The latter fascinated me as I found it hard to believe that it was one building as the two different styles of architecture created the illusion of two separate buildings. Construction of this cathedral began in 1880 as the old cathedral could not house a growing population. Its impressive façade is red marble finished with brick and the architectural style Renaissance with Gothic touches. The three domes at the back of the building are covered in tiles from Czechoslovakia. It seems a miscalculation on the part of the architect, Juan Bautista, accounts for a pair of missing domes at the front. The cathedral was completed in 1967 when it opened its doors t took over one hundred years to complete and the three pavilions inside can accommodate more than ten thousand people. It was impressive both inside and out and when we emerged we moved on to the flower market across the road. 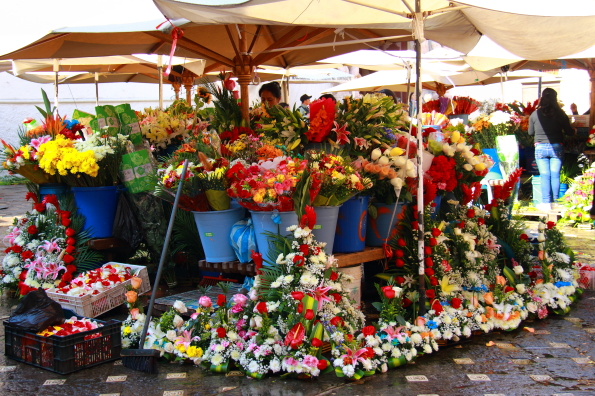 The export of flowers, and in particular long stemmed roses, is an important source of revenue for Ecuador and the countryside is dotted with the pale shapes of greenhouses. Competition to produce different blooms is fierce among the rose growers and visits to rose-growing centres are strictly controlled. A colourful variety of these blooms decorated the stalls of the small market. We found a small stall that was selling juice made from flower petals. It was very refreshing but after I had gulped it down I was informed that not only was it considered good for the health it was also diuretic. I hoped it did not work too quickly as there was still a lot to explore. We wandered along the cobblestone streets admiring the beautiful buildings many of which have been converted into hotels. There are only three buildings from Colonial times and most of the buildings are from the Republic era when the Spanish ruled. A flight of steps led us out of the old city and when we looked back we could see the stack of buildings that marked the edge of this area where it reached the banks of one of the four rivers that flow through the city. As we walked we were entertained by a local school band rehearsing on the opposite bank. We also stopped to admire a superb mural that reflected the fame of the city as a centre for the manufacture of straw hats that subsequently became known as the Panama hat and its history as part of the Inca Empire. 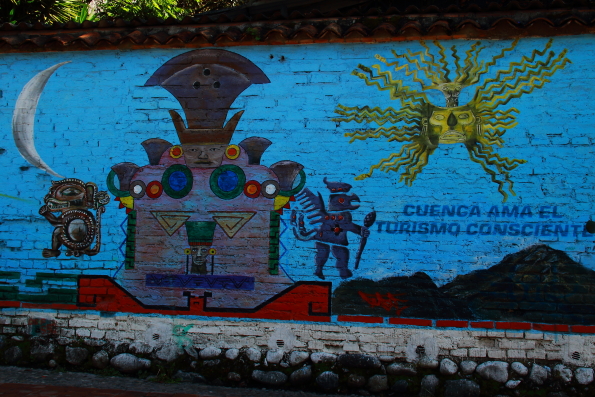 Outdoor enthusiasts flock to Cuenca to spend time in the El Cajas National Park a short distance from the city. It has thousands of miles of trails for hiking and cycling which never get crowded due to strict controls in place to preserve the environment. As we drove through the stunning scenery we pleaded for a stop to take photographs but our guide, Christian, relented only to allow a two minute stop to photograph some wild llamas grazing by the road. Only those with permits (free) can stop in the park but vehicles passing through are timed and kept under observation by cameras placed along the road. Anyone failing to traverse the park within time limits imposed could be liable to a fine. 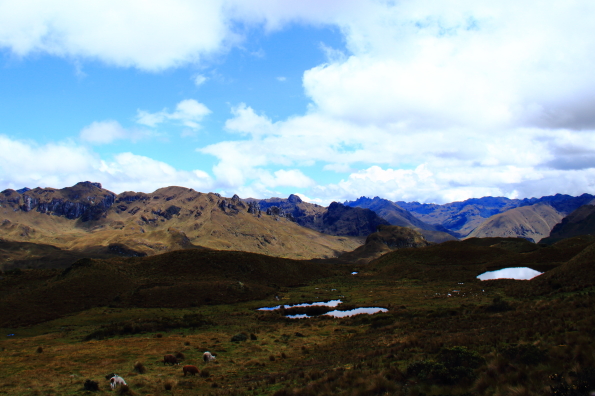 After leaving the park we climbed to the top of the mountains before descending on the other side into the cloud forest. It was eerie driving through a landscape wreathed in mist. Vegetation on the slopes of these mountain forests captures moisture through a process known as horizontal precipitation which allows plants to flourish even in the dry season. When we stopped for a break I seized the opportunity to explore the fringes of the forest and was surprised to find large mounds of recently harvested bananas and a pig snuffling in a small clearing in the trees. Its owner emerged and we exchanged greetings as she hurried away to her next task – the weekly wash in a large outside basin of cold water. All too soon it was time to move on to our next destination – Guayaquil. 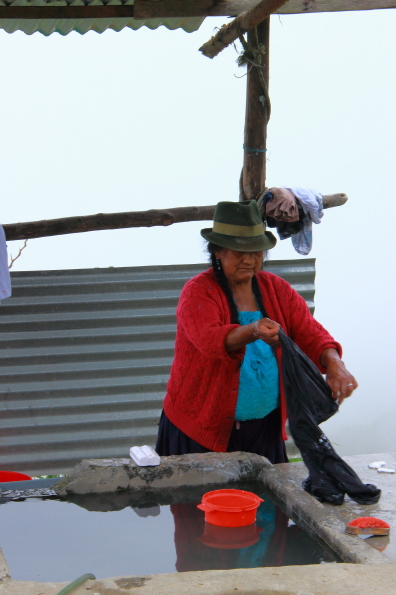