Sunrise and Switchbacks in Ecuador

Through the pitch dark I could just make out the shape of the hotel porter and track his movements through the scrunch of suitcase wheels on the cobbled path that wound its way through the grounds of the Hosteria Abraspungo. We had arrived at this delightful hotel at dusk the evening before and we were departing before dawn so there had been no time to appreciate our surroundings. But the interior was bursting with character and the cuisine had been tasty and traditional. The fish dish had been served in a small wooden casket but most of us had opted for the cook it yourself meat dish that was served on a hot slab of rock. 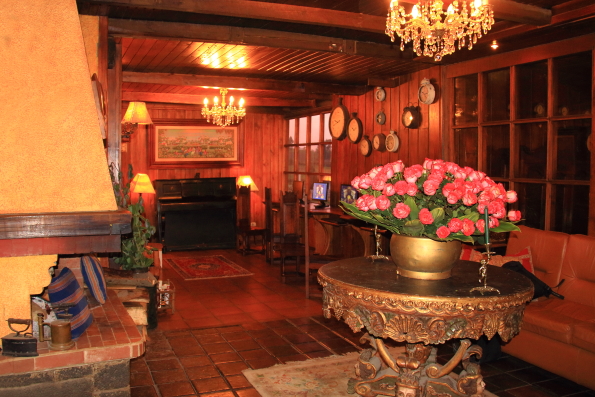 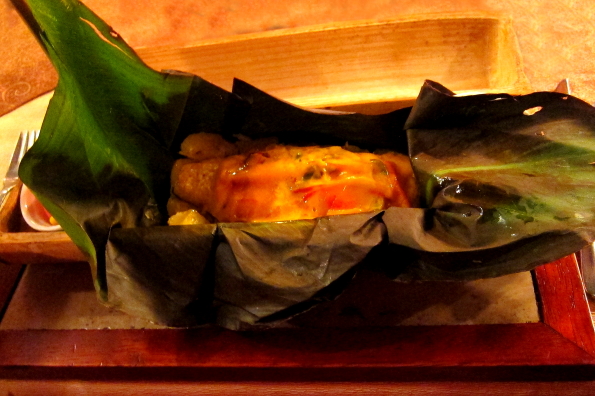 Although it was very early I was looking forward to the day ahead and more new discoveries as we continued our journey across Ecuador. I could tell from the rustling and murmurs behind me that my companions were of the same mind. We had not gone far before our bus pulled off the road and through the gloom we could see a charming stone built church, La Balbanera near Riobamba. When the Spanish came to Ecuador Riobamba was one of the first places they settled after they had conquered the Incas who were already established in the area. It seems that they may have been tricked into believing that this was Quito, the capital. The original church was built in 1524 and was one of the first things the Conquistadors built. This building was destroyed in 1797 during a big earthquake but it was rebuilt and this church is still considered to be the oldest Catholic Church in Ecuador. 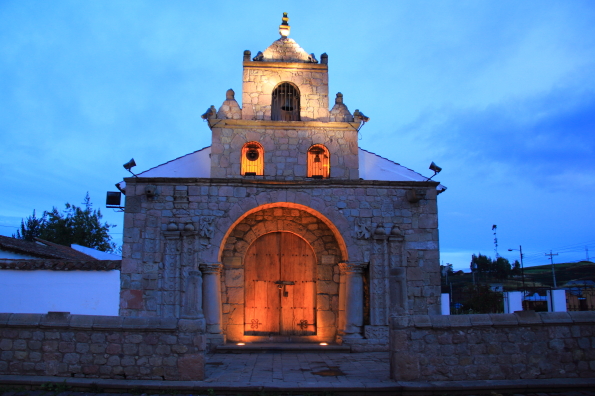 The church was still floodlit when we arrived but as dawn broke we had an extra treat in store as the snow-capped peak of Chimboroza, the highest volcano in Ecuador, was revealed behind it. Our journey had taken us along the section of the Pan American highway known as the Avenue of the Volcanoes. Today it was going to be clear and sunny – summer. Yesterday it had been grey and wet – winter. There are not really any seasons in Ecuador and the locals say it is summer if it is sunny and winter if it rains. Ecuador does have rainy seasons usually late December to May but over the last few years this has not been consistent. It had not been comforting to know that it should not be raining now. Due to the mountains and its position on the equator Ecuador does not really have seasons but it does have a lot of different eco-systems and micro climates. Yesterday we had started in in the mountains, in Quito, and had dropped down to the plains or páramos. Plumes of smoke indicated the areas that were being burnt in the belief that it improved the quality of the land but even though this has proved not to be the case the practice continues with consequent changes to the vegetation. It was a long journey but Christian, our guide, not only exhorted us to drink lots of water he was also very good at dealing with the consequences with regular stops at interesting places. After travelling for just over an hour we had stopped at a café with a smallholding at the back and views of the surrounding countryside. As the last person got off the bus two llamas were led into the parking area and tethered to a shrine so that we could take photographs and then drop some money into an open wooden box on the ground beside them. One of the beasts was not impressed with our contributions and gobbled them up and then spat them out at our feet. Notes would never have survived such an assault which is probably why the Ecuadorians have adopted the $1 coin. Ecuador adopted the US Dollar as its currency in 2000 in the hope of stabilizing its economy but the difficulty in relating the value of the US Dollar to the old currency, sucre, caused so much unrest that the president resigned and went into exile and all the banks were closed resulting in financial hardship for a lot of people. Their economy has now recovered with oil from the rain forests being the most important source of revenue – although it is a precarious source, due to environmental issues. Money sent back to their families from Ecuadorians working in other countries is the second most important source followed by bananas, flowers and then tourism. 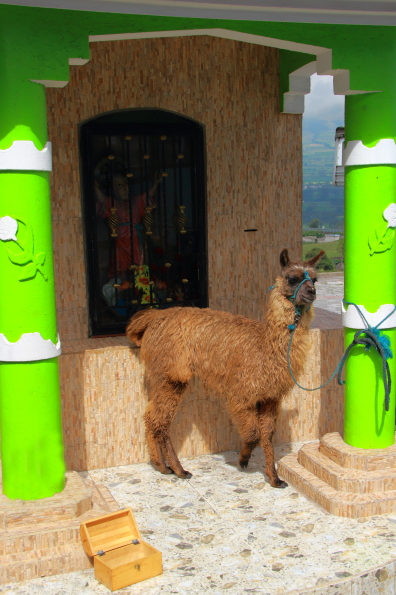 We spent some time in the Cotopaxi National Park a huge nature reserve extending across three provinces and the most popular in Ecuador and featuring four volcanoes including the Cotopaxi. History relates that native Ecuadorians once worshipped this volcano and built homes beside the River Pita the ruins of which can still be seen. When the volcano began erupting in 1534 Spanish conquistadors were attempting to subdue these natives but everyone fled in fear. The most famous eruption of Cotopaxi took place in 1877 when mud and ash spewed out of the volcano and covered a huge area. It was a devastating time but it is predicted that there is more to come as the majority of the volcanoes in this area are still active and it is predicted that Cotopaxi itself will erupt sometime during the next five to ten years and the damage will extend as far as Quito itself. Vegetation zones within the park include the snow covered peak of Cotopaxi and the humid mountain forest around Lake Limpiopungo – the name means clear entrance and there is certainly a clear entrance to the water as the lake is set in a vast flat plain surrounded by a ring of volcanoes. Not many native trees have survived the deforestation and pine trees were introduced during the 1920s but they have not proved to be compatible with the indigenous wild life. We had two walks in the park, the first around the lake which is famous for its variety of birds although the rain had driven them all into hiding. During our second walk, through a botanical garden in the rain forest we saw some white-tailed deer and an interesting variety of flowering plants. 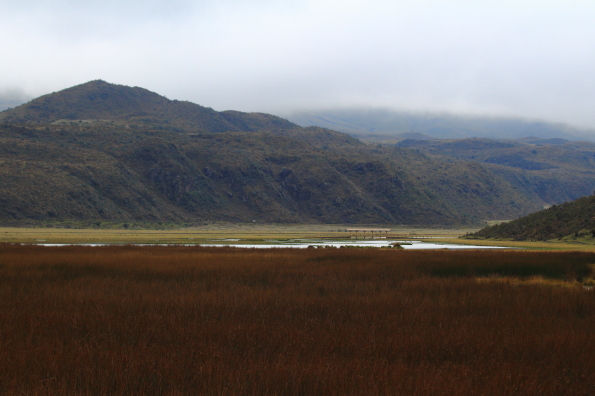 Today was sure to be a real highlight as we were going to ride through La Nariz del Diablo or the Devils Nose section of the one railway line that crosses Ecuador from Quito in the mountains to Guayaquil on the coast. This railway, built over 100 years ago was, at the time, a remarkable feat of engineering as the track wends its way around mountains, traverses rocky ravines, runs alongside rivers and threads its way through dense cloud forest. But the hardest section to build and the most spectacular to ride is through the Devil’s Nose which connects the central plateau with the coastal plains. The first problem had been selecting a suitable place to build this section. In 1901 a rocky slope of the Andes, then known by the locals as the Condor’s Aerie was chosen. Since the line was built the name has been changed to the Devil’s Nose not just because the condors abandoned it due to the invasion of their privacy but also because it took such a toll of workers during its construction.

As it makes its way from Alausí to Sibambe, a journey of around 45 minutes, the train descends 500 metres over a distance of only twelve kilometres. This steep descent is made possible by the use of switchbacks. The train goes slowly past a junction and then reverses down the next section before going forward again. A workforce of 3,000 Jamaicans and 1,000 Puerto Ricans was employed to lay down the track and around a third of them are estimated to have died in the process. Once the track was finished many of them remained in Ecuador. The entire track was operation for fifty years and then it began to fall into disrepair and the empty stations were plundered. By the 1990’s nearly all of the train sections had fallen into disuse and decay although the Devil’s Nose remained open because of the many visitors who came to ride it. 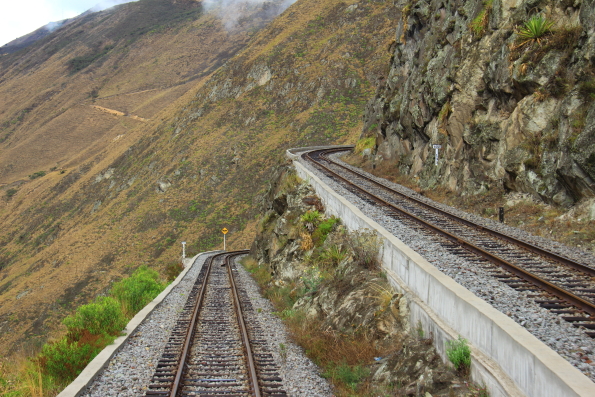 An ongoing programme of restoration was started a few years ago to restore the whole rail network and the section descending through the Devil’s Nose was re-opened in June 2013. The train cars have also been refurbished and visitors can relax on their plush upholstery in between forays to the open windows to exclaim at the spectacular views and the criss-cross of tracks creeping down the steep slopes into the valley way below. This ambitious multi-million pound project will ensure trains once again run from Quito, high in the Andes all the way to lowland Guayaquil on the Pacific coast connecting the Valley of the Volcanoes with the infamous Nariz del Diablo (Devil’s Nose) – one of the steepest stretches of railway ever built. 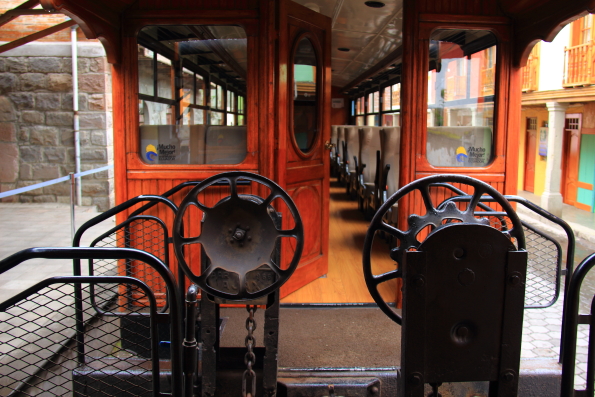 We arrived in time to enjoy a coffee in the café by the station and to browse the souvenir stalls in the concourse. Following a recent experience on the Swanage Railway I asked Christian if the workers on the railway were volunteers. He roared with laughter and said “that would never happen in Ecuador”. Running this section of the railway is quite labour intensive. First we were not allowed to board until our individually assigned tickets had been checked against our passports (pre-booking is essential). That involved staff at separate desks for each of the four carriages. Each carriage had a guide who gave us a commentary. On arrival at S we were invited to visit the museum (included in the ticket) where museum guides were available to answer our questions and staff in the station buffet dispensed snacks (also included in the ticket). I had quimbolito (sponge cake cooked in a banana leaf) and tree tomato juice which tasted as though the Worcester sauce had already been added – yum! It was a joyful experience. Comfy seats the position of which could be changed so passengers could always face the way we were travelling. I felt slightly guilty that I did not pass on this information to some hapless Germans in our carriage that spent the entire outbound journey going backwards. They were amazed when they joined us for the return journey and saw that we were all facing in the direction of travel – the backs of the seats can be moved from one side of the seat to the other. 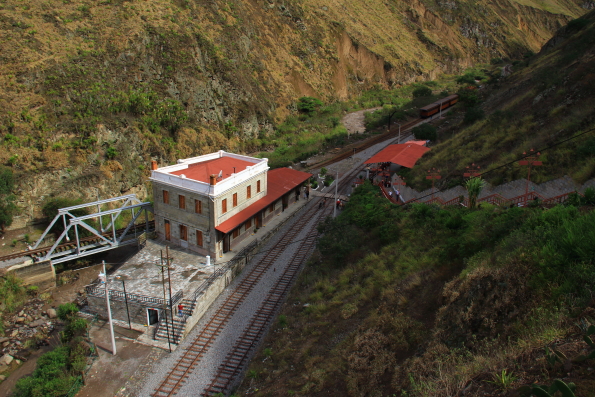 It had been a wonderful experience but it was time to continue our adventure. Next stop Cuenca. Yihaaa … 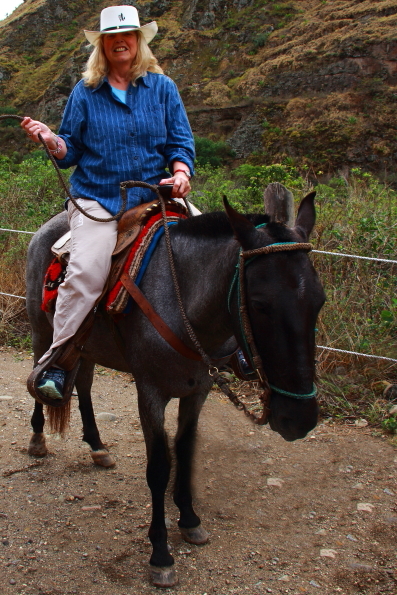