As the clouds drifted around the peaks beyond the restaurant window so the debate rolled around our circular table – should we or shouldn’t we? An hour later I was glad the majority had voted positively as I stood 4,100 metres above sea level and 1000 metres above Quito relishing the green sunlit patchwork of the moor of Pichincha volcano far below me. 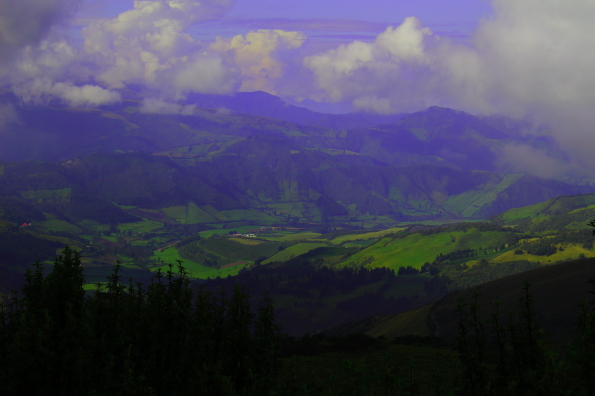 It had taken us longer to make our decision than it had to find three taxis ($5 per taxi each way) and make our way to the base of the teleferico and then ride to the summit of Cruz Loma around 1000 metres above the city Quito. A return ticket cost $8.50 ($2 less for senior citizens. At the top it was clear on behind the mountain but the city was still obscured by cloud. Notices exhorted us not to run and I was happy to obey so when some of my companions decided to go down soon after we got there it was a good excuse not to rush to join them. I wanted to take my time and explore the interior of the Ermita de la Dolorosa, the highest chapel in the world. It was built to celebrate the miracle of La Dolorosa one hundred years earlier when the eyes of her portrait opened and tears fell from them. A replica of this portrait is housed in this beautiful little chapel. 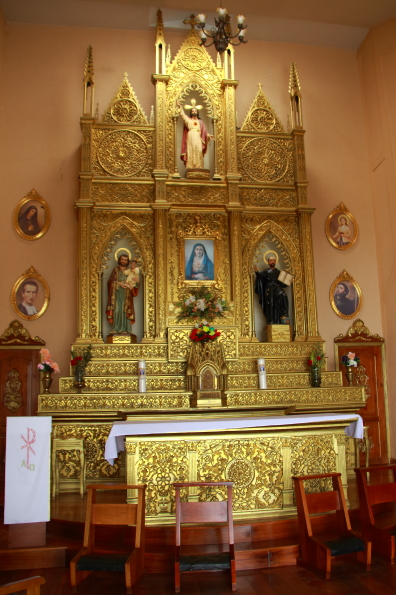 I had resigned myself to an early return to earth but then the clouds over the city parted giving us tantalising glimpses of the urban sprawl below. Quito is the second highest capital in the world (La Pas is the highest) and as its growth is restricted by the mountains that surround it stretches for 105 km north to south but is a mere 6.5 km from east to west. Delighted that our patience had been rewarded we were happy to make our way back down to the city as the city below played hide and seek with us as we tried to pick out the places we had visited during our stay. 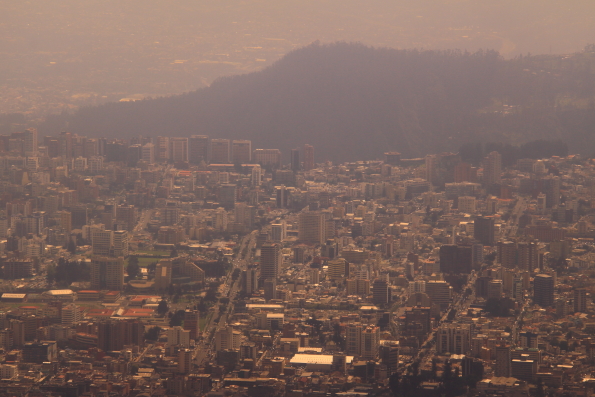 We had started by driving out of town to see the Middle of the World Monument (La Mitad del Mundo) where we stood astride the yellow line that represents the equator with one foot in the southern hemisphere and the other in the northern hemisphere. We took the lift to the top of the enormous monument crowned with a globe for the views of the surrounding area. Christian, our guide, pointed out a pole at the top of a mountain in the distance that marked the position of the Equator as calculated 5000 years earlier. It is claimed that the present position is incorrect so it is likely that the present monument that was built in 1979 will be moved or replaced in the future. We walked back down the stairs stopping at each floor to look at the exhibits in the Ethnography Museum that is housed in the building. After some free time to explore the shops, relax over a coffee or use the bathrooms on each side of the Equator to see the water exit the basin circling the different directions we drove into the city centre. 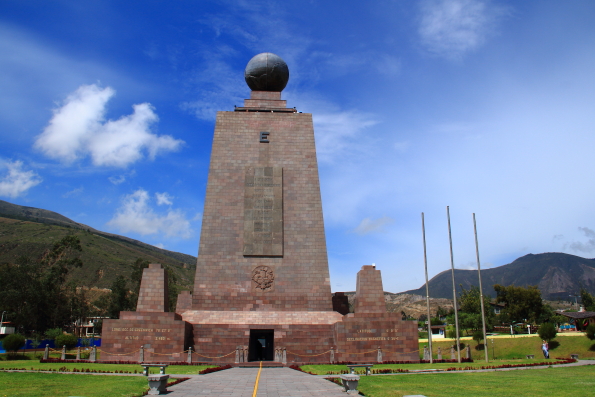 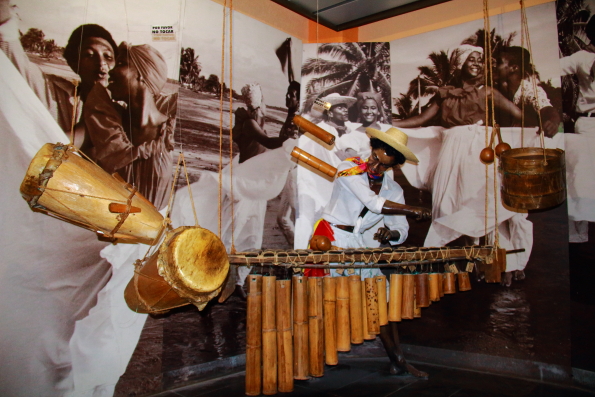 Quito has the largest and best preserved colonial area in South America and its historical centre was our next stop and the start of a walk back through time. We started La Plaza de la Independencia also called La Plaza Grande which became the main square of Quito during 16th century when the Spanish, afraid that the Incas might poison their water supply, built a protected well in the square. It became the social centre of the city, the central market and a bullfighting area. After taking in the ambience of this bustling square we went inside the Palacio Arzobispal (Archbishop’s Palace). It was built in 1852 but it no longer houses an archbishop or the mayor who subsequently laid claim to the property. The Andalusian and Moorish inspired linking courtyards house a variety of eating places and handicraft shops. 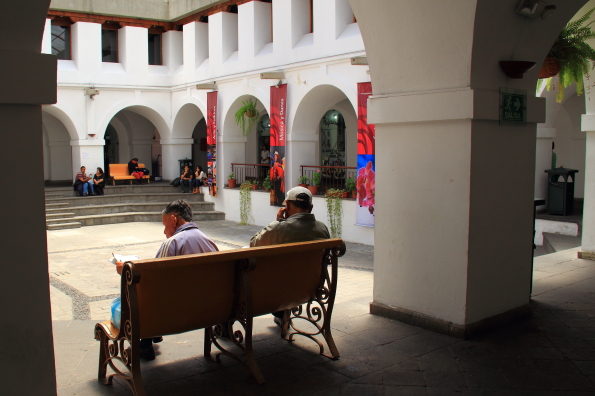 We crossed the square to the neoclassical Palacio del Gobierno (Government Palace) – admiring the statuary on the war memorial on our way – a lion representing Spain and a condor the bird of Ecuador. The original palace was built in 1650 but was destroyed by fire and re-built in 1920. The new building was designed by a collaboration of architects and several different styles are evident. The president was in residence preparing to greet visitors from Haiti so we could not go any further than the main entrance where we peeked through the iron railways at this beautiful example of Moorish architecture and took photos of the uniformed guards. 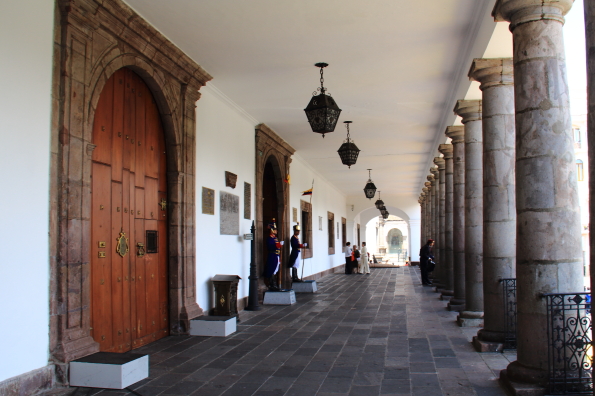 A short distance from the Plaza Grande is the Centro Cultural Metropolitano a colonial building built in the seventeenth century by the Jesuits as a seminary. It later became a university and then it was taken over by the Municipio and still houses the library. It was completely restored in 1997 and in 2000 was re-named and is now an institution dedicated to cultural matters. The first courtyard housed some very colourful temporary exhibitions representing festivals in Mexico and Ecuador. Beyond that courtyard a second courtyard featuring a beautiful garden is surrounded by the Municipal Library and under the arches there are some exhibits celebrating the history of printing and the bi-centenary of the Ecuadorian constitution. 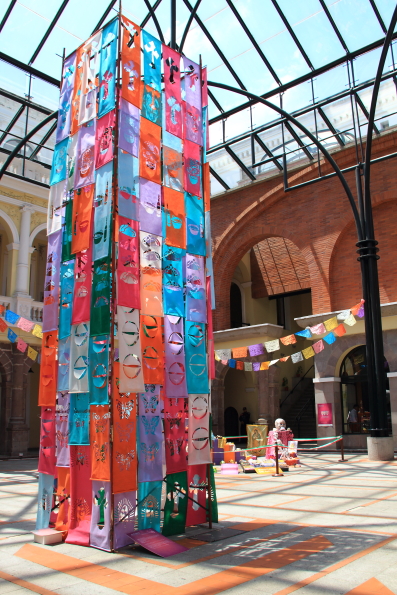 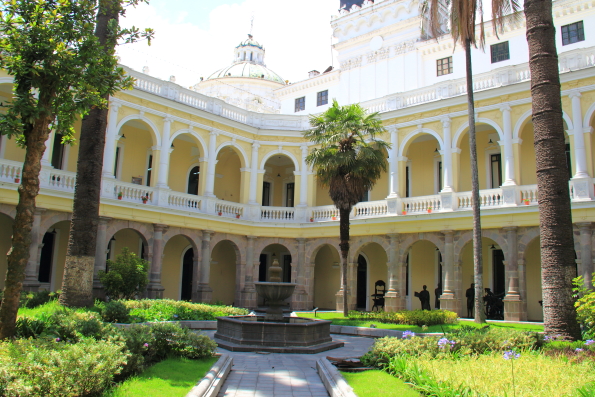 Next door is the fabulous Church of the Society of Jesus (Iglesia La Compañía de Jesús). Often referred to simply as la Compañía it is one of the most significant works of Spanish Baroque architecture in South America. The company in question is the Jesuit order and construction of this church was begun in 1606 twenty years after the first Jesuit priests arrived in Quito. The aim was to establish a church, a school and a monastery. It was not completed until 1765 which explains the difference in design between the Baroque façade and the Renaissance interior. The church’s bell tower was not re-built after it was destroyed for a second time by an earthquake so outside it looks a bit bare but the interior is a wealth of gold-leaf, gilded plaster, wood carvings and gold plate mostly the work of artists of the Quito School. 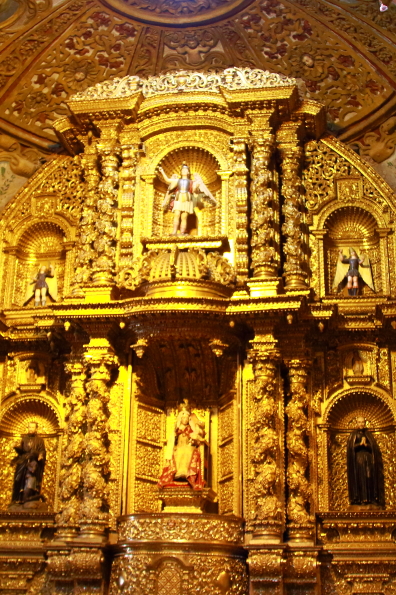 As we made our way to the Plaza de San Francisco I looked down one of the narrow cobbled streets where I could see the mountains and caught sight of a statue that looked like an angel hovering above the city. It was not an angel but a replica of the famous Virgin of Quito a sculpture by Bernardo de Legarda that sits on the main altar of the church of San Francisco. It is a unique version of the Madonna as it portrays a winged virgin standing on a serpent’s head and dates back to 1734. It has become a symbol of the city and in 1976 a huge aluminium replica was created by Agustín de la Herrán Matorras and placed on El Panecillo (bun) one of the smaller mountains that encircle the city. I wanted to walk towards it following the narrow street that lead towards the mountains and then climb to the summit to view the city from above. Instead I had to turn away and follow my companions into the museum housed in the convent of San Francisco. The large temple of San Francisco of Quito was adapted to house thousands of objects but first we climbed the steps up to the first floor to visit the choir that had room for 61 friars and two organs as well as a good view of the church below. On our way out we paused to appreciate the immaculate gardens in the courtyard on the ground floor. 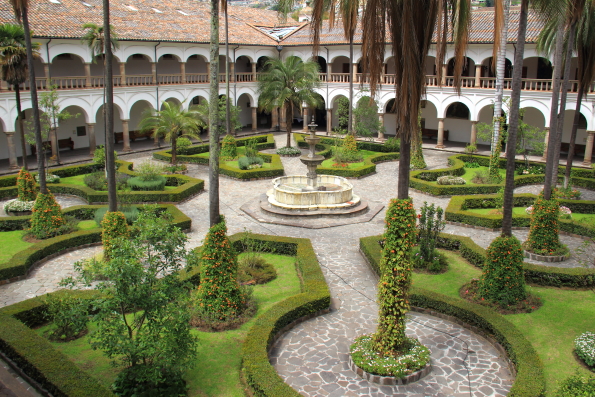 We had lunch in the Tianguez café that is housed in the cloisters of the convent with a seating area outside and a chance to watch the comings and goings in the square. The restaurant is connected to a small shop in this cave-like structure and the walls of both are decorated with an interesting collection of masks. The cuisine is traditional and I had my first taste of Ecuadorian empanadas – one made with plantains with a cheese filling and the other made with corn flour with a meat filling. They were delicious. 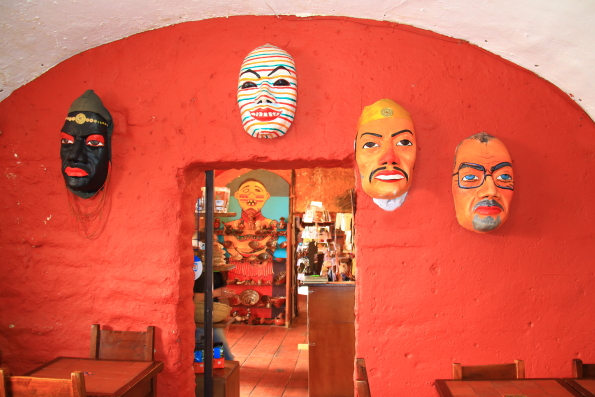 Our grand finale in Quito was dinner at the Grand Plaza Hotel in the Grande Plaza and on our way there we stopped to look at the magnificent Gothic cathedral. It was stunning in all its floodlit glory. And so was the Grande Plaza which was alive with music and people dancing. Before we dined we went up to the roof terrace of the hotel for the views over the city – the darkness punctuated by the glowing domes of the many churches. 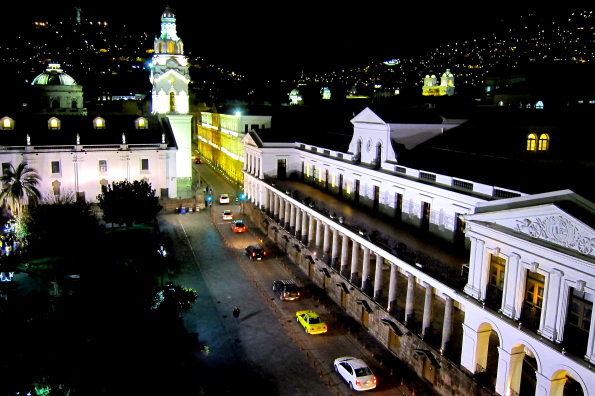 The restaurant where we ate reflected the history of a building that had once belonged to one of the most prestigious and aristocratic families of the city. The pleasure of dining in such a lovely venue was enhanced by one final surprise. When it was time for dessert two monks slipped out of the shadows and brought us bowls of ice cream and sorbet from which issued plumes of white smoke – an unforgettable conclusion to a memorable visit. 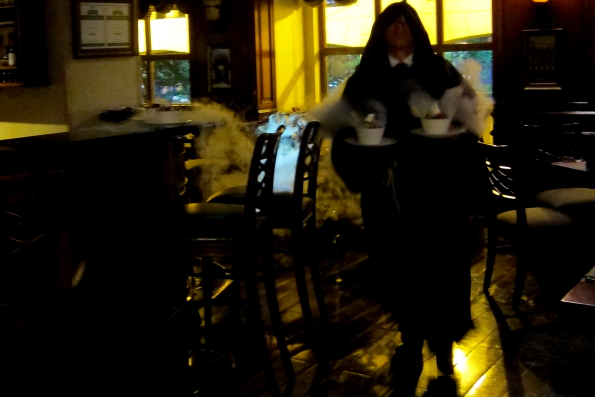 **************************************************************************************
Our stay in Quito was part of a tour organised by Solos Holidays and their local representative in Ecuador, Ecuadorian Tours. We stayed at the Hotel Quito in the north of the city which enjoys spectacular views of the Andes. This area was once a very popular place to live until accidents involving aircraft landing and taking off from the old airport that was close to the city centre made it less desirable. Now that a new airport has been built outside the city its popularity is increasing again. The Hotel Quito is state owned and the base for exchanged programmes with students from Venezuela so it can be noisy at times but the rooms at the far end of the three-storey extension are very quiet. The hotel has a good sized swimming pool, an outdoor spa and a gymnasium. The restaurant and bar are on the seventh floor with great views across the valley to the mountains beyond. We enjoyed a fabulous buffet breakfast every morning with a great variety of fresh fruit and different fresh fruit juices every day supplemented by freshly cooked eggs. Flights with KLM via Amsterdam offer the option of flying home from Quayaquil after a visit to the Galapagos Islands.