A Day Out at Corfe Castle Village

I started my journey to the village on the open top deck of the number 50 Purbeck Breezer that runs from Bournemouth to Swanage via the chain ferry that links the Sandbanks sand spit to the Studland Peninsula. I had a great view from the top deck of the bus watching fisherman on the wall by the ferry. Everyone around me applauded when one of them succeeded in hooking a fish. I remembered an exceptional afternoon tea on the terrace in front of the Haven Hotel. As the ferry chugged across the water narrowly missing a yacht that chose to run the gap between us and the jetty ahead I watched some ponies galloping along the sandy beach that fringes the peninsula. I remembered walking the length of that beach a few months earlier. I had forgotten it was a nudist beach and had decided to walk as close to the sea as possible – eyes averted. I was not lacking in company the whole way and could only wonder why it was only men of a certain age that suddenly decided to run towards the sea as I came into view. 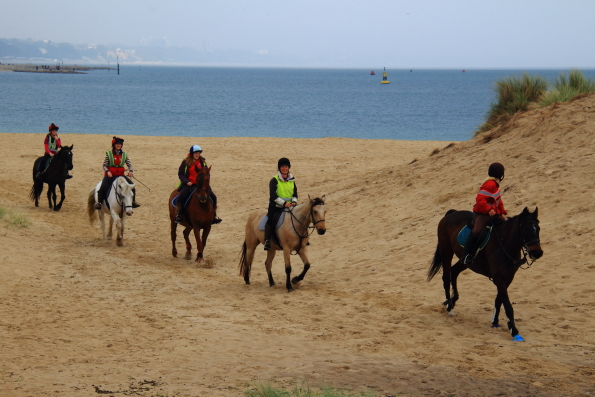 We drove along the peninsula with great views of heathland on either side until we reached Studland Village and then it was up and down hill until we reached Swanage. On arrival at Swanage station I had a choice of transport to get to Corfe Castle Village – bus or the steam train operated by the Swanage Railway Company. I chose the latter and arrived at Corfe Castle station in style. 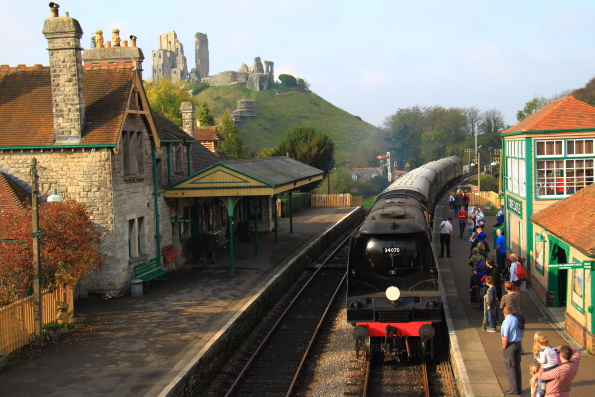 Inspired by the views of the castle ruins from the train I decided to go straight to the castle which was just a short walk through the centre of the village. I was immediately struck by the fact that nearly all the buildings have constructed from the local grey Purbeck limestone which I later discovered had been plundered from Corfe Castle. The original castle was built by King Alfred at Corffe’s Gate to defend the coastline around Swanage following some skirmishes with the Danes. It stands on a natural hill guarding the gap between the south of Purbeck and the rest of England and all traffic between the two areas had to go past the castle. The original wooden castle was built around AD 877 and then it was rebuilt in stone by William the Conqueror in the second half of the eleventh century. For the next six hundred years it was a royal fortress used by the reigning monarch until it was sold to Sir Christopher Hatton, the dancing master and favourite of Queen Elizabeth, in 1572. In 1635 Sir John Bankes, the Lord Chief Justice, bought the castle as an occasional private residence. He moved there permanently with his family just before the start of the Civil War. 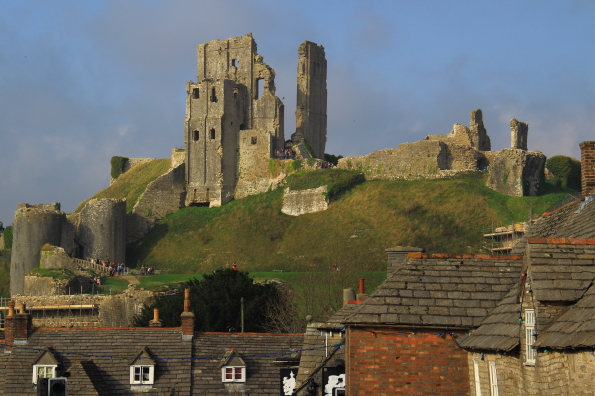 Most of Dorset was occupied by Parliamentarians during the Civil War and Lady Bankes and her supporters withstood several sieges (her husband died in 1644) but finally late in 1645 Colonel Bingham Governor of Poole began a serious siege she was finally overcome due to the treachery of one of her own officers, Colonel Pitman. The family were allowed to leave before an Act of Parliament decreed that the Castle be blown up from the inside by engineers. 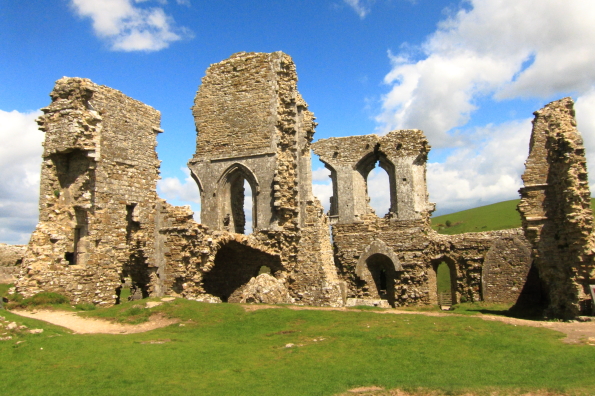 Although the Bankes family regained their properties in the 1660s they chose to build a new house at Kingston Lacy rather than try to rebuild their castle which was left in ruins. It remained in their ownership until 1982 when Ralph Bankes bequeathed the estate to the National Trust. Between 2006 and 2009 extensive maintenance and conservation work was undertaken at the castle and it was re-opened to the public in 2008. It is one of the National Trust’s most popular tourist attractions and the facilities there include a gift shop and a licensed tea room. While I was there it was buzzing with adults and excited youngsters queuing to partake in the various activities available including the teddy bear zip wire – all organised by enthusiastic volunteers. 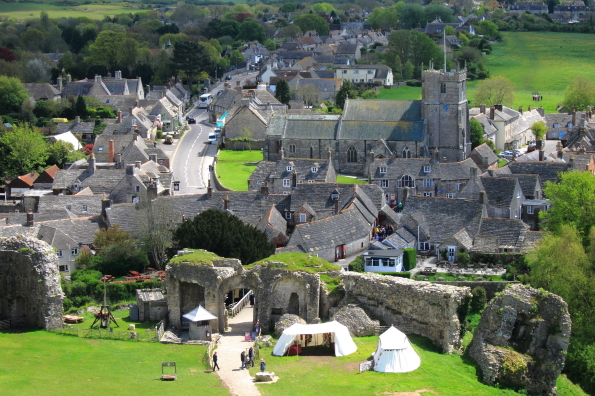 The Roundheads had also left their mark on the next place I visited which was the parish church of Saint Edward. The original church dates back to the thirteenth century and was dedicated to King Edward whose body was said to have been laid to rest here. He was murdered in 978 on the orders of his stepmother, Elfrida, so that her son, Ethelred the Unready, would succeed to the throne. Its fifteenth century tower has survived but the rest of the church was rebuilt in 1680 using the original stone. It never recovered from desecration by the Roundheads during the Civil War when Cromwell’s troops used the church as a camp. Their horses drank from the font, they turned the organ pipes into cases for gunpowder and shot and stripped the church of lead and to use as shot. The vicar’s surplice, a very expensive item in those days, was made into two shirts for two soldiers. Was Cromwell the first re-cycler? 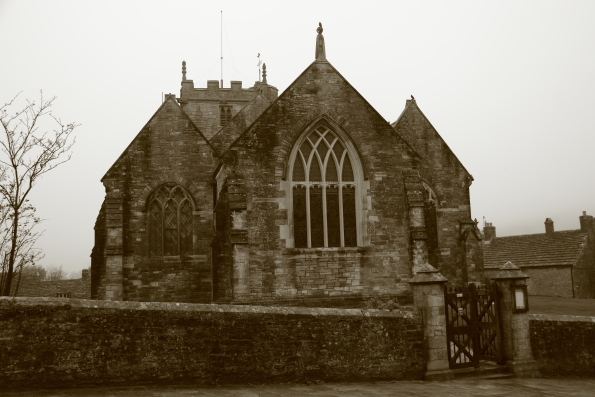 As I strolled down the road towards the Model Village I stopped to take a photo of a building simply because it was so small. I noticed a plaque on the wall and crossed the road to read. It was the smallest town hall building in England and houses Corfe Castle Museum. My curiosity was aroused and I went through the open door to face an iguanadon, (dinosaur), staring at me through the glass of the single showcase that fills the one room. There were images and artefacts relating the history of Corfe and the clay, stone and Purbeck Marble industries. Evidence of nearly every period of history is present in this village which makes it very unusual. I was particularly fascinated by the Corfe Castle insignia painted on the village water pump during the fifteenth century by Francis Newbury in the fifteenth century and used by the Mayor and Corporation until 1989 when Corfe Castle lost its town status. The Old Town Hall was already over 200 years old when it was given to the Town Trust in 188. The ground floor was built with stone plundered from the castle after it was destroyed during the Civil War and around 1680 the single storey thatched building was destroyed by fire around 1680. During the early eighteenth century a two storey building was constructed on the site and was the seat of the Mayor and Barons of the Ancient Borough of Corfe Castle with its Charter dating back to Queen Elizabeth I. In 2002 the trustees were concerned about the condition of this Grade 2 listed building and launched an appeal to renovate the building. This successful appeal was supported by the Jon Snow, the news presenter and the work was completed four years later. The ground floor houses a museum and the first floor is a meeting room that can be booked for small functions as its capacity is limited to twenty to twenty-five people at a time. 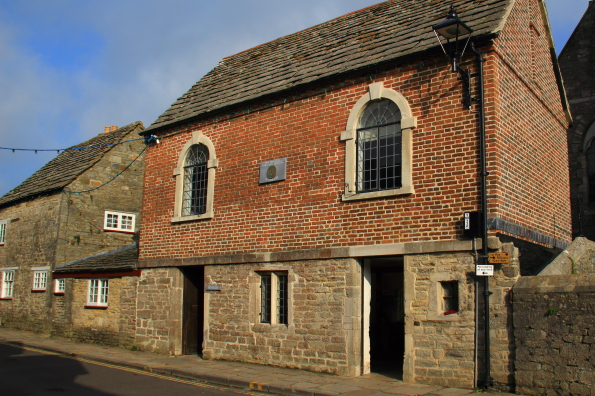 I entered the model village through the Courtyard Café on East Street. It was the idea of Eddie Holland, a local businessman at a time when model villages were at the height of their popularity. It includes a replica of the castle and as Mr Holland wanted this to be close to the real castle he waited until he could purchase a suitable property and two years later, in 1966, it was opened to the public. Most of the buildings are the work of Jack Phillips, a builder from Parkstone. Each building is made of a wooden frame topped with roofs made from tiny Purbeck stone tiles. Most of his work was done the Potting Shed which is now a small museum in the garden. The garden surrounding the village is beautiful and includes a medieval style parterre replicating a formal garden of the seventeenth century. 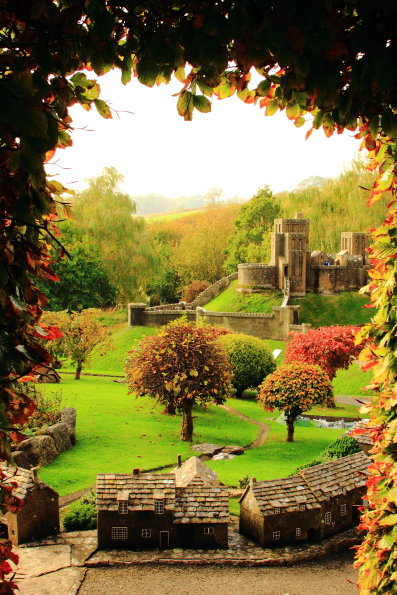 There was plenty to explore in the gardens apart from the village. I nearly jumped out of my skin when the sentries challenged me, peeked through the window on the Wicken (the river) hoping to spot a kingfisher and explored the wilderness at the far end. I wished I had time to linger over a coffee on the terrace overlooking the croquet lawn but time was not on my side. I turned back for one final look before going back through the archway and saw my favourite view of the day – the ruins of Corfe Castle behind the complete model. 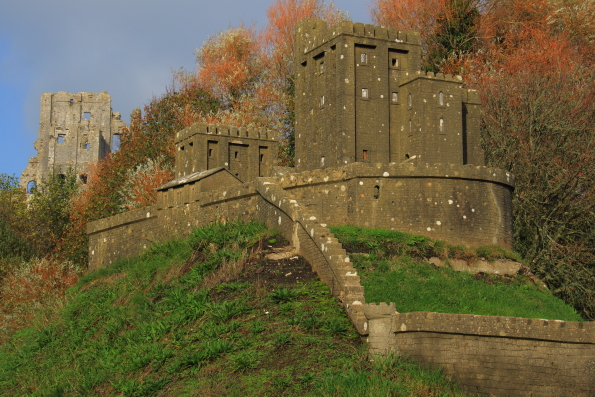