I was enticed into the train station at Swanage by the aroma of grilling bacon and the thought of a bacon buttie. I had to walk along the platform to get to the Bird’s Nest buffet in a carriage parked at the far end. On my way I met Keith Mitchell from Passenger Services and asked him when the next steam train would arrive at the station. He told me it was due in soon and pointed out a good vantage point to watch it arrive. 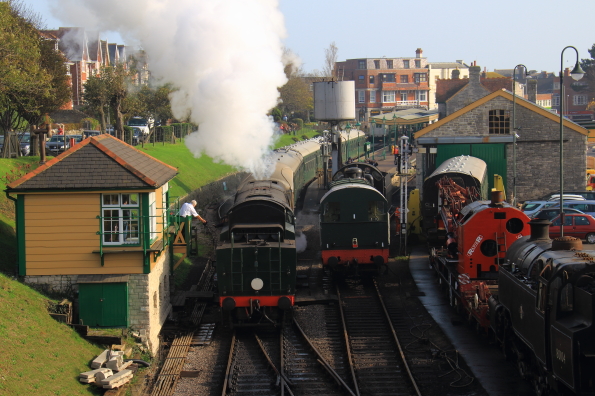 Keith is one of 300 volunteers that help to operate the steam train service between Swanage and Norden. His first experience as a volunteer was working on the model railway in Bournemouth and then he joined the Swanage Railway Company in 1990. He has fulfilled various roles including ticket inspector and running the ticket office. During the high season he is paid for his work and is hoping eventually to become one of only 35 permanent staff. We had plenty of time to talk about the history of the railway before the train arrived and I learnt that the mainline from Swanage to Wareham closed down in 1972. Following this closure British Rail took up all the tracks (apart from a short stretch that was still in use to service the freight terminal near Wareham) and ownership of the land reverted to the local authority. The station buildings at Swanage soon fell into disrepair but after lengthy negotiations between the Swanage Railway Company and Swanage Town Council volunteers moved in and the society gradually restored the buildings and started to lay down tracks. 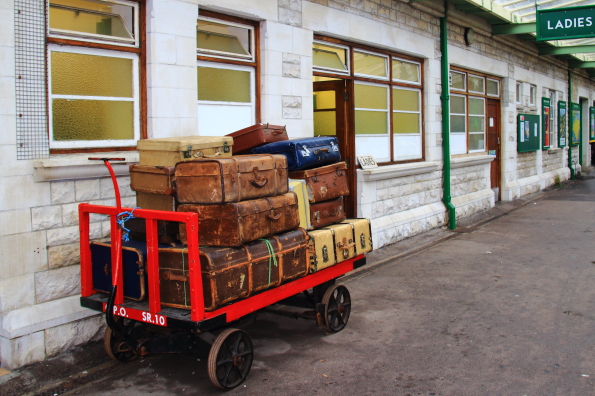 In 1980 the first public service was operated by Swanage Railway Company. Meanwhile the remaining line into Wareham was still being used for freight – mainly clay and then oil after BP developed oil fields around Poole Harbour and built an oil terminal at Furzebrook. This operation continued until pipelines were laid down to move the oil during the 1990s and the freight trains stopped running. Volunteers began work on the line between Norden and Furzebrook and by 2009 the link was complete. Recently Swanage Railway has leased the track almost to Wareham but it remains closed apart from the occasional ‘special’ travelling to and from Swanage by special arrangement. In places the track is in such poor condition that trains have to reduce their speed to 10 miles an hour and rely on hand signalling. Frank Roberts (ex-army) has been charged with the job of repairing the track, with the involvement of the army, between now and September 2015. The track will be upgraded to take diesel trains and from early 2016 the railway company with begin operating a trial 60 day passenger service. I was swept along with Keith’s enthusiasm and made a mental note to sign up for the newsletter to follow their progress. Our conversation was interrupted by a whistle sounding and the train arrived in a cloud of steam. It was thrilling to watch the driver and his mate shovelling coal and to hear the hiss of water and the churning of the wheels. I decided I would take the train to the end of the line. 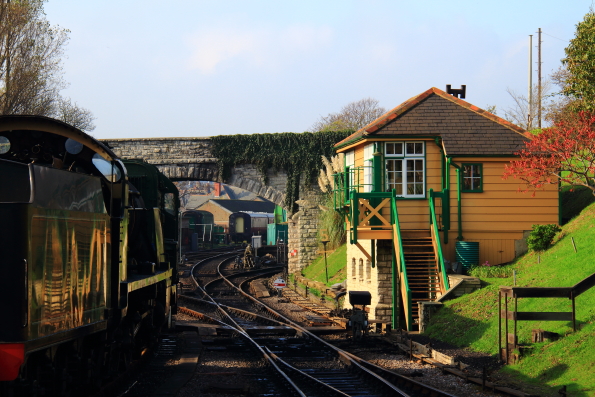 After boarding the train I walked through the carriages to the observation car immediately behind the engine. Passengers pay a supplement to sit in there but Bob Patterson, the steward in this Pullman coach did allow me inside to have a look around. Bob has a long standing affection for the luxury Pullman coaches built in the 1920s and 30s and he wears his steward’s uniform with pride. Despite living in Essex Bob is a regular volunteer. 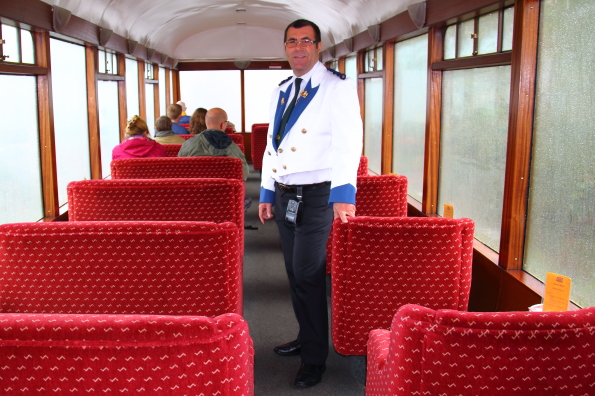 When the train arrived in Norden I made my way to the mining museum nearby. Entrance is free but donations are invited in order to maintain this delightful museum. A path punctuated with information boards led me to the original track of the old narrow gauge clay line that ran from the clay pits to the exchange siding to be loaded onto a train. The position of these clay pits determined the layout of the Swanage Railway and it was due to the existence of clay in the area that the need for a railway line arose. 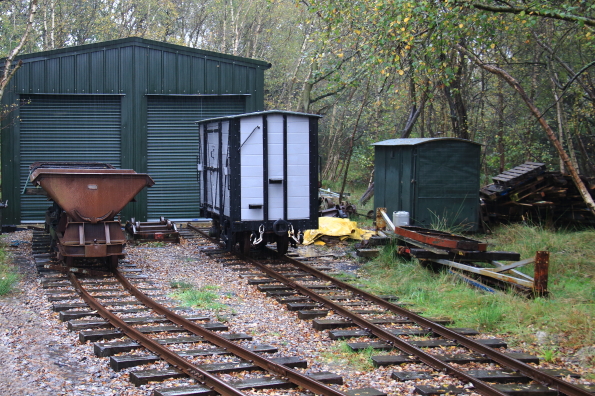 Purbeck is one of the few areas in the world where ball clay is found and its fine quality has made it ideal through the centuries for Roman pots, clay pipes and bone china. During the seventeenth and eighteenth century the clay was transported from the heaths where it was dug out to Poole Harbour in panniers on horses. In 1806 a tramway from Norden to Middlebere on the edge of the harbour was constructed. The wagons were drawn by horses and this tramway lasted for 100 years. It was the first of several tramways that were built linking the mines to wharfs on the harbour’s edge where the clay was loaded into barges. Moving the clay by boat was expensive and when the Swanage Railway branch line was built it was designed to facilitate the transfer of clay from the tramways to the main line. Clay to be used within Britain then continued its journey by train while that going overseas was transferred to ships in Poole Quay. Having learnt how the clay was conveyed from the mines it was time to learn about the mining process itself and I entered a large shed that represented the working area of a mine. This mine building was not originally sited here but moved here to preserve it and create the museum. The building was donated by Imrys when Norden number 7 was closed in 1999 and volunteers have laid it out as it would have been when the mine was active. Visitors can see where the clay tubs were winched out of the mine tunnel and the clay was transferred into hoppers that were then emptied into lorries to be transported to processing works at Furzebrook. After exploring the working area I entered a mine shaft that led me to the exit from the museum. 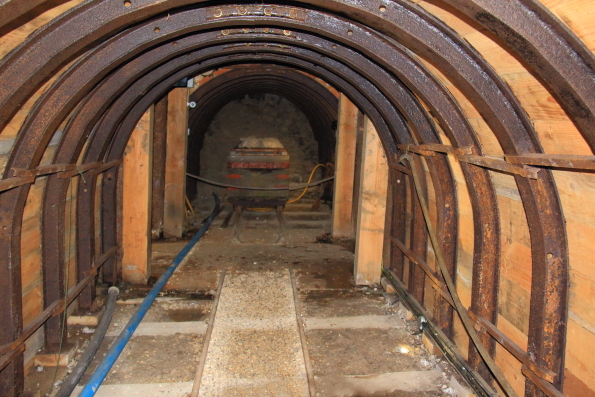 I had time to spare before the train to Corfe Castle and decided to have a snack in the Bird’s Next buffet. Gill Miles greeted me warmly and waited patiently while I perused the selection of homemade cakes, Gill’s homemade cakes. Her carrot cake is scrumptious. I was fascinated by the array of her homemade chutneys, marmalades and jams lined up on the shelves behind her – grapefruit, orange and lemon marmalade nestled beside apple and apricot chutney and above blueberry jam. Although Gill is now a paid member of staff she started working for the railway as a volunteer in 1980 when she was living in London. On their holidays in Dorset the whole family would often be involved in various roles. Gill has now moved to the area and is based at Norden. 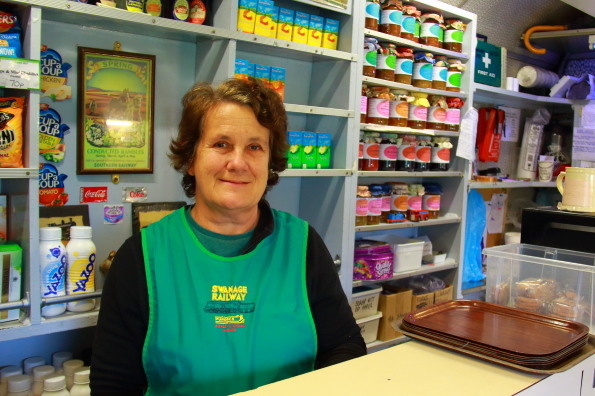 My day ticket allowed me to get on and off the train and my next destination was Corfe Castle. There are three signal boxes on the line between Swanage and Norden at Swanage, Harmonds Cross and Corfe Castle all of which have won awards. The signal box at Corfe Castle is the only one actually on the station platform and therefore most easily accessible for visitors and this is why Roger Peperell particularly enjoys working there. On entering the signal box I was confronted with a line of brightly painted levers – blue, red, black and white and Roger going up and down the line pulling and pushing them into position. Once the departing train was clear of the station he was able to explain what he had been doing and show me round his domain. This signal box began operations in 2011 and was constructed from the original components of two signal boxes from the 1920s. The original signal box on the opposite side of the line will be converted into a museum. 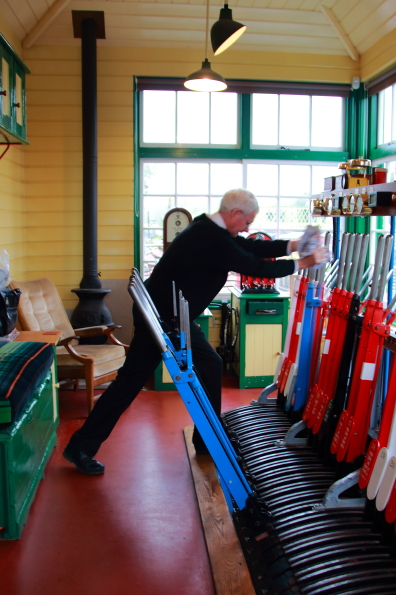 Roger took me through the procedure he has to follow every time a train goes through the station using the tokens and tablet machines that are 70 and 130 years old respectively. Every time a train goes through tablets are exchanged between the signal man and the train driver. These are conveyed in a large hoop that not only facilitates the exchange but also protects the tablet in the cab of the steam engine. He also has to keep meticulous records in the train register relating to all arrivals, departures and permissions. I was not surprised to learn that Roger, with all his expertise, was also a volunteer and a highly skilled volunteer as he has had to do the same training as regular railway employees. This involves passing 10 exams initially and then taking bi-annual exams and being subjected to unannounced visits by railway inspectors. Roger’s real passion is airplanes but after moving to Swanage 4 years ago and not being near an airfield he became involved with the railway 2 years ago. He is also a volunteer historian for an American aircraft manufacturer and spends a lot time in America. I wondered how this fitted in with his role as a signalman and he explained that volunteers can do as many shifts as they wish and can also express a preference for venue. I left Roger preparing for the next arrival and made my way to the Swanage Railway Museum behind the signal box. Admission is free of charge but voluntary donations are accepted gratefully. The aim of this museum, which is part of the Swanage Railway Trust is to preserve items of historical, architectural, engineering and scientific value that are connected with railways including the Secondus. Built around 1879 this is the only known surviving example of a steam locomotive built in Birmingham. It worked at Furzebrook China Clay Quarry in Wareham hauling wagons of clay from the pit until it was replace by road transport in 1955. 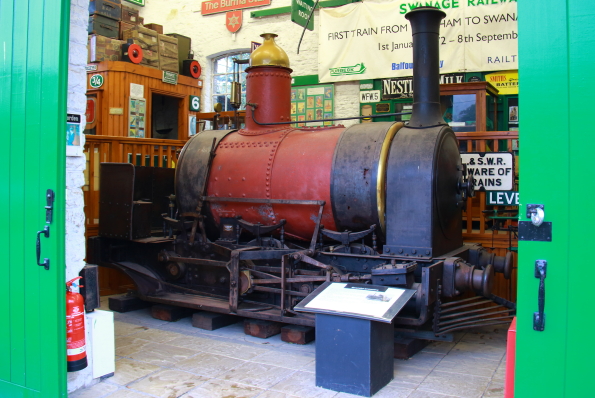 My final journey was back to Swanage. I had really enjoyed my day on the railway and had met some interesting people who give their time to keep the railway operational and an interesting attraction for visitors to the area. All of them had a story to tell and all had a welcoming smile. 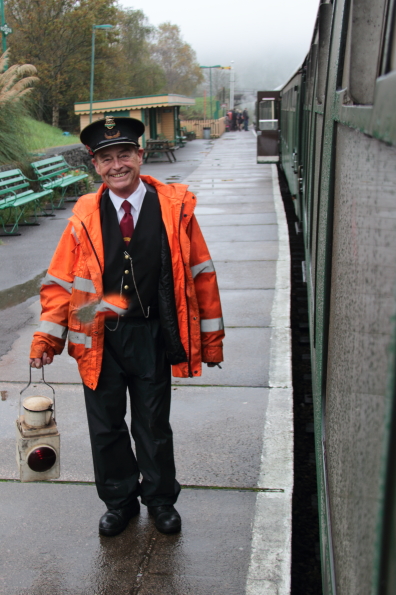