On the road to Volubilis we stopped above a reservoir. The air was fresh and sweet with aromas from the nearby stalls piled high with squash and pomegranates. After tasting the latter and stretching our legs we continued on our way to the Roman ruins. 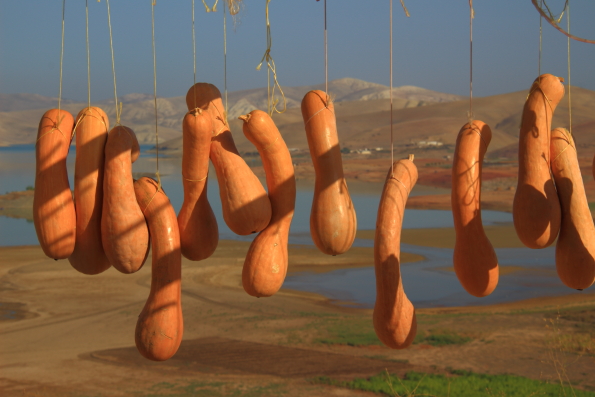 I remember the ruins at Volubilis for three reasons. The beauty of the place – pillars and arches stark against a blue sky and a background of rolling Moroccan countryside. The enthusiasm of our guide, Mr Rashid, as he explained the layout of this fortified Roman city that was built on a foothill of mount Jebel Zerhoun which, because of its isolated position is one of the richest sites in North Africa. The third reason was the lecture we got from the guide with another group at the site about tipping toilet attendants. Moroccan guides can be very aggressive about tipping their compatriots. 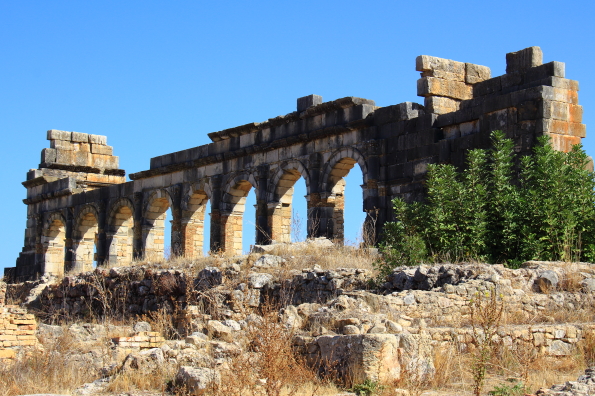 There was very little time to relax over a mint tea in the shade of the trees before we were on our way to our next destination, Meknes. Here we strolled through the massive granary or the Water Palace (Der el Ma) which sultan Moulay Ismail built on a reservoir to store grain to feed the twelve thousand horses kept in the Royal Stables behind this building. To keep the grain cool and prevent it rotting it was built with thick walls, a suspended forest was grown on the roof and water from the reservoir flowed through ducts in the floor. The size of the stables is impressive despite them having been partially destroyed in an earthquake during the eighteenth century and a fitting monument to the respect the sultan had for his horses. These stables were kept in pristine condition and the horses were waited on hand as each one had its own groom and slave – it was the duty of the slaves to catch their urine in a bowl. A canal running through this structure ensured the animals never lacked fresh water. Keeping thousands of horses was not the sultan’s only claim to fame as he also, reputedly sired over one thousand children. 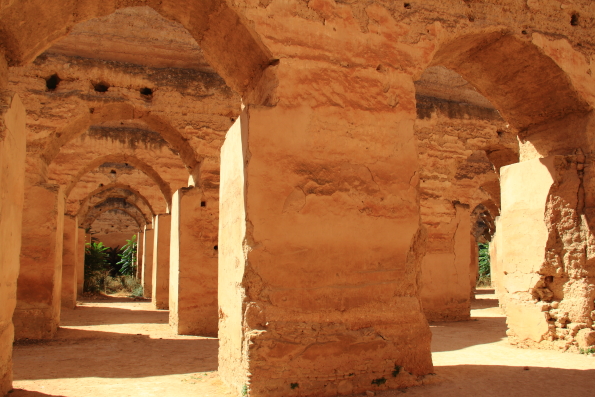 We also visited the sultan’s mausoleum which was suitably impressive and then, after lunch on a terrace overlooking the entrance to the medina and the remains of the Royal Palace we caught the train to Rabat. It was our second journey by train. The first had been very enjoyable as we lounged in comfortable air-conditioned compartments, with regular opportunities to buy refreshments from the trolley that regularly patrolled the corridors. This second journey was at the end of a national holiday and everyone, including railway officials was making their way home. The train was packed and crowds were left at each station we passed through as there simply was not room for them. Our right to sit in our reserved seats was respected although the luggage of the travellers who filled the corridor was piled up around us and the trolley ceased to operate after the first stop. It was an authentic experience of the Moroccan way of life. 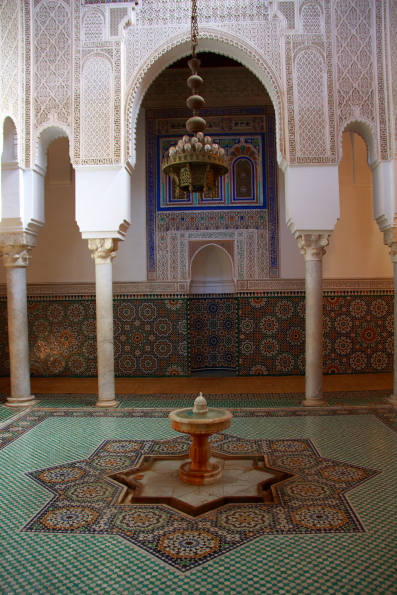 Our tour of Rabat started at the Mausoleum of Mohammed V which houses the tombs of Mohamed and his two sons. On each side of the entrance are guards dressed as Berber warriors and each of the four doors into the mausoleum has a guard on duty and inside, at each corner, there is a guard – both wearing different uniforms. Just beyond the mausoleum on the far side of an area of stunted pillars surrounded by crumbling walls is the Hassan Tower. These are the ruins of the Hassan Mosque, an ambitious project started by the Almohad Sultan Yacoub el Mansour in 1195 but never completed. Hassan Tower was intended to be one of the tallest towers in the world but despite only reaching two thirds of its intended height it is still an impressive structure. 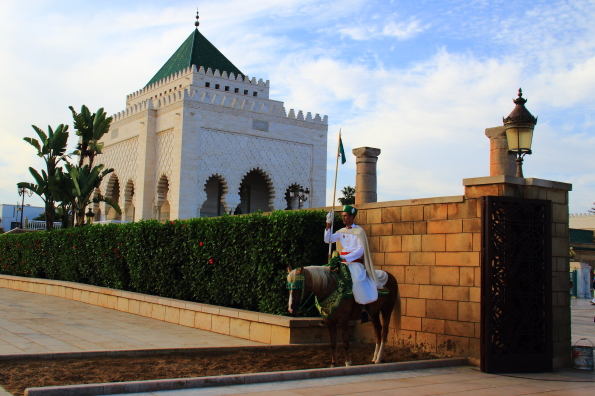 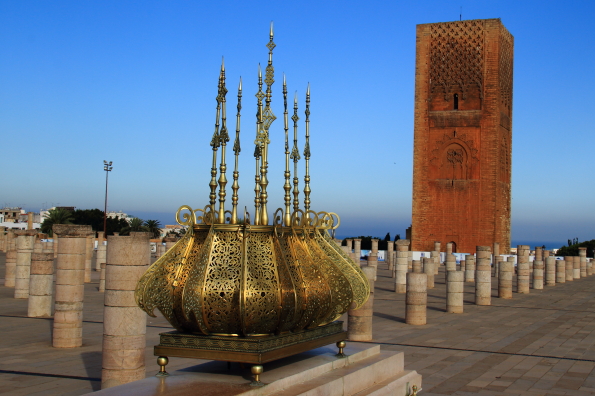 One of the most striking of the many gates in Rabat and a beautiful Moorish monument is the Bab Oudaia the principal gateway to the Kasbah Oudaia, the citadel of Rabat. Blue and white was the theme of the narrow streets of what is now a residential area – the blue of the doors emphasised by the whitewashed walls. It was delightful. We emerged on a terrace overlooking the ocean and the old fortifications and spent a while watching locals playing on a football pitch marked out on the sandy beach below us. 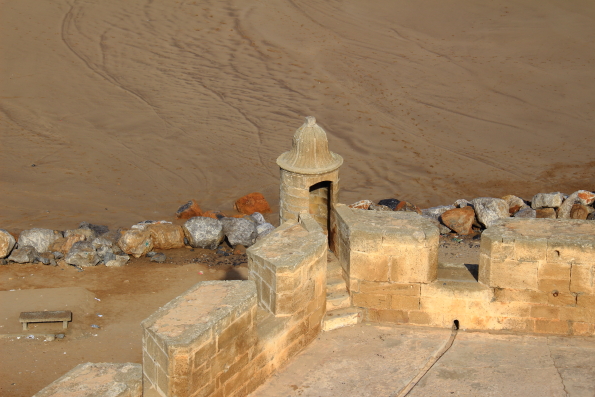 We re-entered the Kasbah and strolled through some pretty alleys with decorated entrances and pale blue walls until we reached a door that led into the Kasbah’s lovely Andalusian Garden, planted with cypress, lemon trees, roses and bougainvillaea. A stairway climbs from the garden to a 17th-century palace built by Moulay Ismail which is now a museum and showcase of Moroccan art and culture. 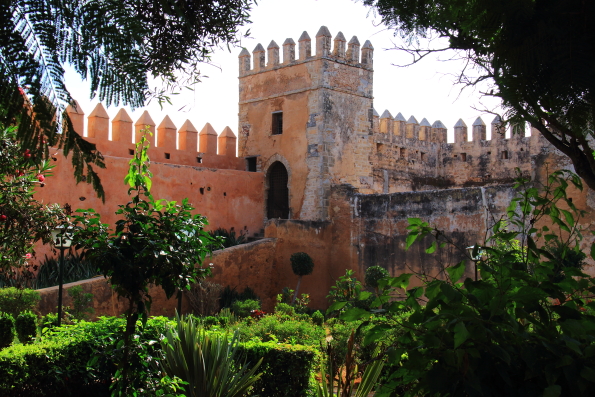 Sadly there was no time to explore the museum and we left the gardens and entered the medina, the old walled part of Rabat and joined the locals doing their daily shop or just passing the time of day. 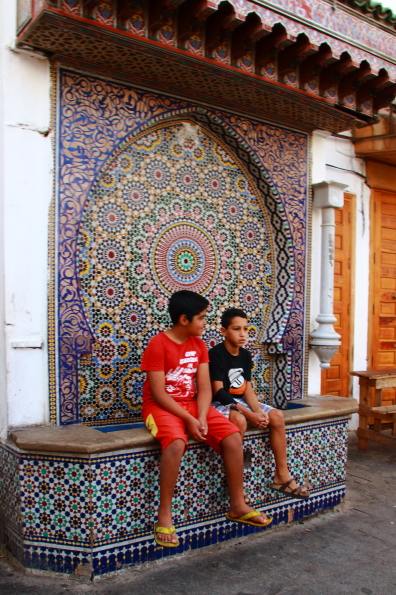 Outside the medina we stopped for a coffee in the garden of a restaurant where a waiter showed us how to pour our mint tea in the traditional manner and we learnt, the hard way, that the brown paper that accompanied our individual tea pots was not a filter but to be used to protect our hands from the heat of the pot when we lifted it. 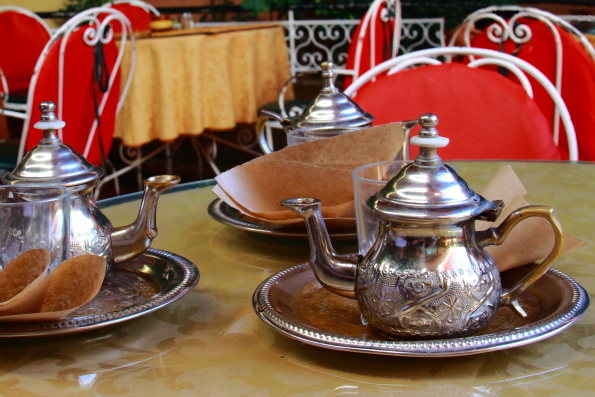 I spent most of my free time in Rabat in earnest discussion with two local police men. It seems I had inadvertently captured their images on one of my photos and they insisted on seeing my last few photos and then deleting the ones they suspected featured them – they could not possibly identify themselves on the tiny LCD screen but it seemed wiser to do what they said than to resist. I was glad to escape their watchful eye when our bus arrived to collect us. We drove out of the city along the River Bouregreg where colourful fishing boats bobbed on the water. 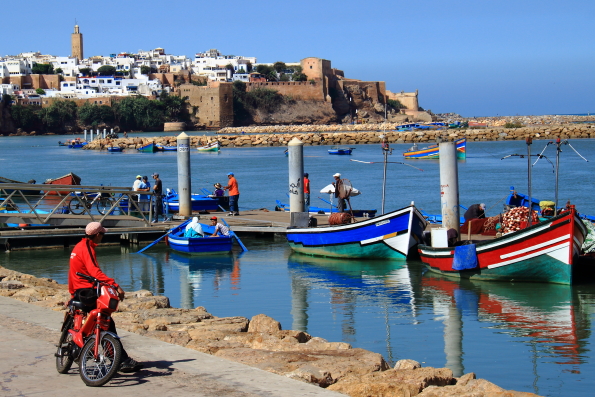