The narrow passages ways of the medina in Fes were deserted. I had expected to be pushing my way through crowds and resisting attempts to be drawn into the small shops that lined the narrow thoroughfares but they were securely bolted behind doors of a variety of hues and sizes. It resembled Christmas day in England and our guide, Hamid, explained that it was the second day of the most important festival in Morocco Eid Al-Kabir – which has great significance for Muslims. 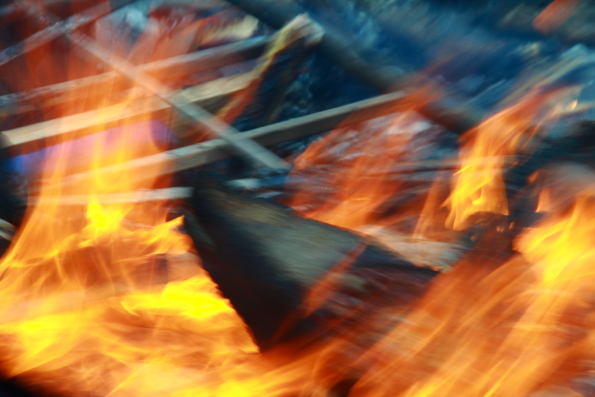 Festivals in Morocco are very low key and although small gifts may be given to children the real focus is the event it commemorates and for Eid Al-Kabir it is the willingness of the Prophet Abraham to obey God and sacrifice his son. When he tried to do this he was stopped by God and told to sacrifice a ram instead. This day is still observed by Muslims when they slaughter an animal, usually a sheep, according to Islamic humane guidelines (zabihah) and then offer some of the meat in charity. Only those who can afford to buy a sheep are expected to participate but many poor families in Morocco will borrow money to sacrifice their own sheep or goat because the real significance of this day is following the example of Abraham’s faithful obedience to God. The day starts with congregational prayers before the slaughter. This had taken place the previous day while we were in Casablanca and visitors had been requested to stay away from the Great Mosque of Hassan II until mid-morning. We just had time to stroll around the outskirts of this magnificent building, the third largest mosque in the world, before getting the train to Fez. 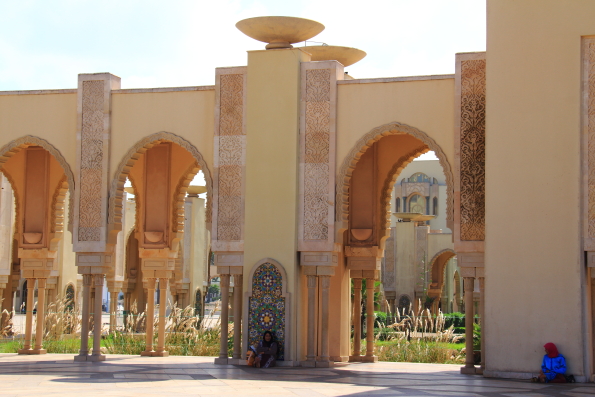 Our city tour in Fes had started at the Royal Palace. It seemed that every city tour started there as we battled through the crowds in the Place des Alaouites to take pictures of the ornate doors that were permanently closed to the public. 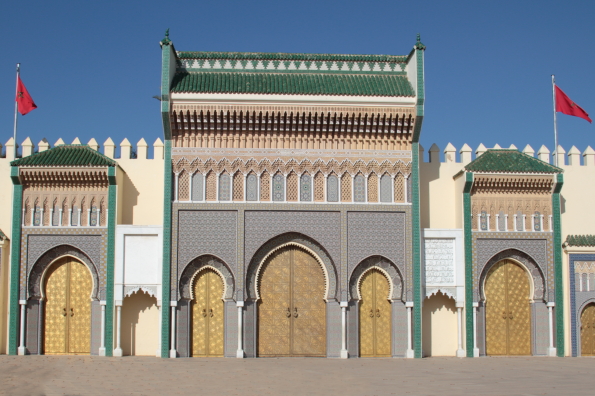 As we strolled through the mellah or Jewish quarter I suggested to our guide that we should follow a different itinerary and miss the crowds. I was rewarded with a huge grin and a shrug of the shoulders. I proved my own point by returning to the Royal Palace later in the day when it was deserted. Time here is an hour behind the rest of us so the shops were still shuttered and the old-fashioned café was full of workers about to start working. 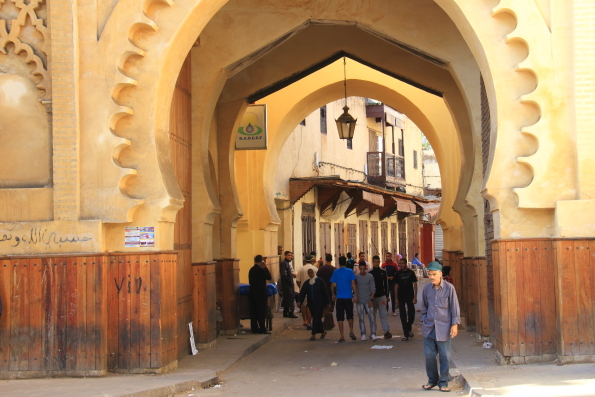 We joined the convoy of tourist buses winding up the hill to the Southern Fort for panoramic views of the city below. Our guide pointed out the three distinctive areas of the city – Fez el Bali (the old, walled city), Fez el Jedid (the new, planned city of Fez) and the Ville Nouvelle (the latest section of Fez). Fez el Bali has been declared a UNESCO World Heritage Site and is thought to be the largest car-free urban area in the world. However, it is not donkey free as we were soon to find out. Our guide thoughtfully taught us the Arabic for ‘watch out’. 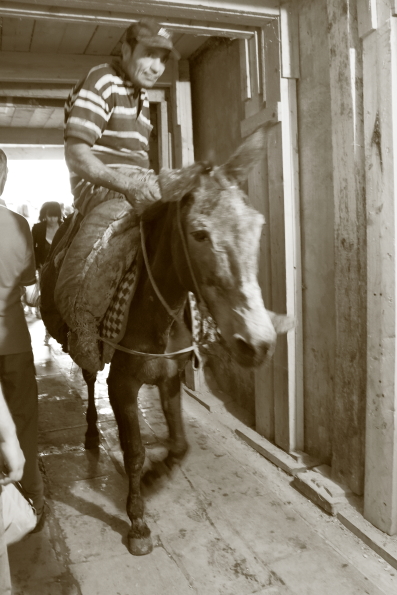 A lengthy visit to a ceramics factory where we enjoyed the views from the roof as much as the goods on display in the showroom meant we were well behind everyone else when we reached the old medina. We entered through through the blue gate or Bab Bouijloud one of the most famous gates in Morocco. Built in 1913 it marked the completion of Fez el Bali and Fez el Jedid. It is beautifully designed and crafted and as you go through it the colours of the mosaics change from blue on the outside blue reflecting the colour of Fez to green on the inside which is the colour of Islam. 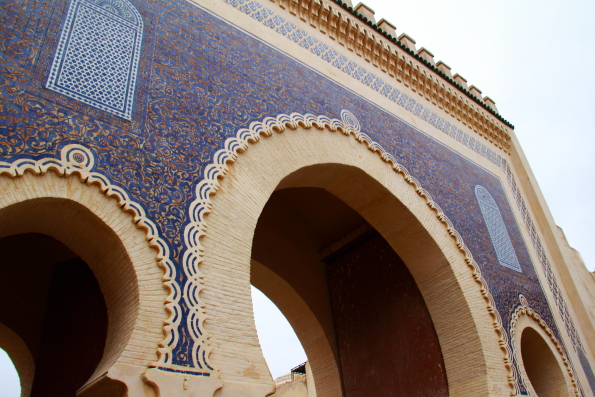 Before we were allowed out of our bus our guide had given us strict instructions to keep up with him as it was easy go get lost in this huge labyrinth of terracotta passageways reputed to have 9,000 streets of the and more than 300 mosques. We scuttled along eschewing many photo opportunities in order to keep the tall, robe clad figure of Hamid in our sights. But some images had to be recorded and including the piles of sheep pelts – remnants of the recent celebrations – and on their way to the tanneries for which Fez is famous. 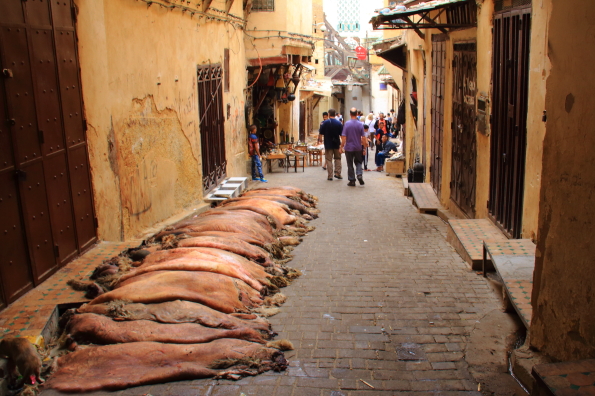 Our first stop was the Bou Inania Madrasa or school. It was originally built as a boarding school and mosque during the 14th Century, and deserves its acclaim as most elaborate, extravagant, and beautiful of all the Marinid dynasty (1248 – 1465) monuments. The walls in the inner courtyard are stunning with their intricate decorations in plaster and cedar. 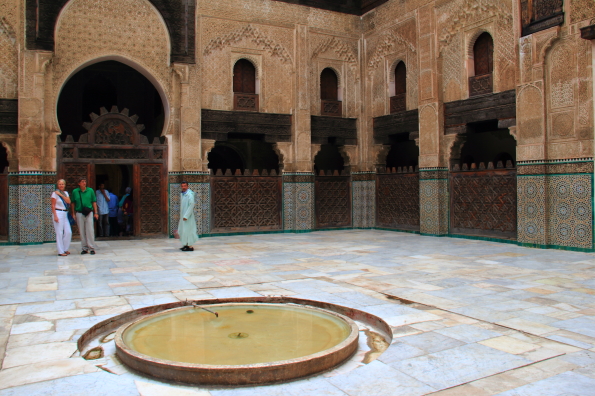 Next we visited the Nejarine Museum of Wooden Arts and Crafts which is housed in a beautiful building with great views of the medina from the roof. 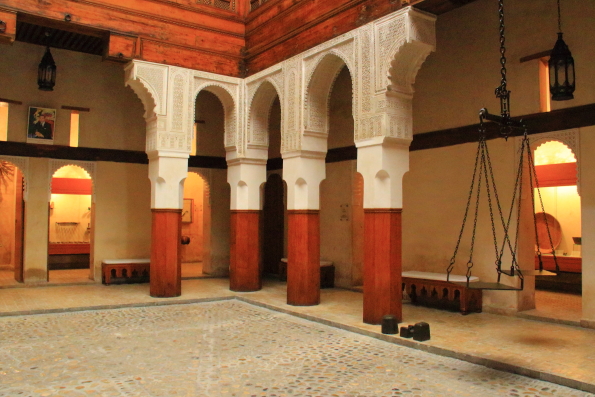 We peeked inside the Kairaouine Mosque (Djemaa el Kairaouine) which is the second-largest mosque in Morocco and the world’s oldest university. Non-Muslims are not allowed to enter. This mosque was founded in 857 by Fatima al-Fihri, the daughter of a wealthy refugee from the holy city of Kairouan in Tunisia. Fatima and her sister Mariam inherited a great deal of money from their father, and Fatima spent it on a mosque for the Tunisian community in Fes. It is the holiest mosque in Morocco and governs the timing of all Islamic festivals across the country. 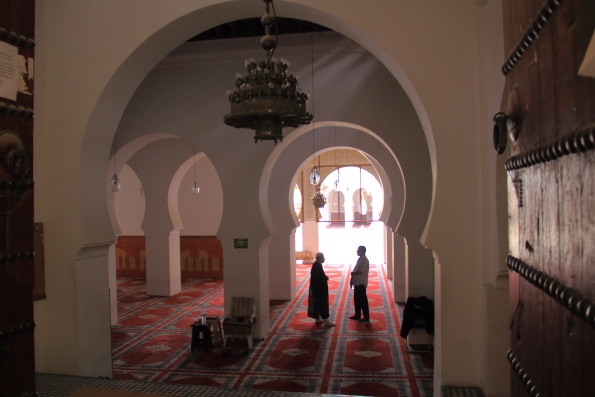 Our next stop was the carpet factory, the second factory visit of the day and the second glass of mint tea. Our guide had promised we would not be going into any shops but clearly did not count showrooms of factories and workshops. The carpet factory had been established in a private house and the dark narrow entrance opened out into a high ceiling, light room festooned with colourful carpets. We admired the carpets and rugs that were rolled out at our feet but no one was tempted and the salesman politely conceded defeat and wished us well. 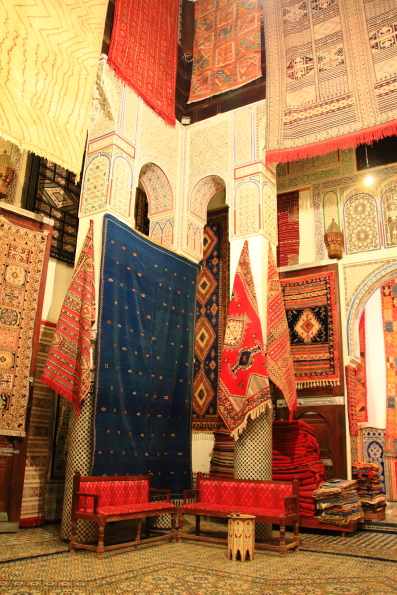 Restaurant Asmae in the medina was our venue for lunch and it was delicious – a nice mixture of starters and then couscous, chicken and vegetables followed by fresh oranges sprinkled with cinnamon. Visiting the Chouara Tannery on a full stomach was not good timing. We started at the top to observe the tanning process. The smell was awful and the sprig of mint handed to each visitor on arrival did little to combat this. The hides are first soaked in a mixture of cow urine, quicklime, water, and salt which breaks down the tough leather and loosens excess fat, flesh, and hair still clinging to them. The hides are soaked for two to three days after which tanners scrap off any remaining excess hair fibres and fat and prepare the hides for dyeing. The hides are then soaked in another set of vats containing a mixture of water and pigeon excrement. The ammonia in the latter is a softening agent that makes the hides malleable so they can absorb the dye. The tanner uses his bare feet to knead the hides for up to three hours to achieve the desired softness. The choice was incredible but the prices were prohibitive. I made the mistake of admiring a leather jacket and was escorted from one showroom to another on several different floors up and down narrow winding staircases until, with sweat pouring down my face from trying several different jackets I was able to convince the salesman that I really was not interested in making a purchase. 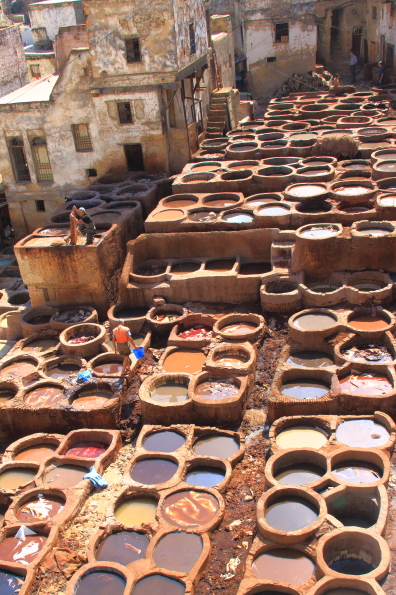 Our next stop was a cactus silk workshop and another shopping opportunity. This time I kept my distance while salesmen draped colourful scarves around the shoulders of my colleagues. It was a short distance from there to a showroom displaying products made from argan oil where the fascination of a green lipstick that turns pick when applied led to several purchases. And that was our final stop in the medina and we left through the blue gate – our minds and cameras full of colourful images. But of all the images I collected that day one that stood out clearly was the forest of satellite dishes on the rooftops – ancient and modern co-existing. 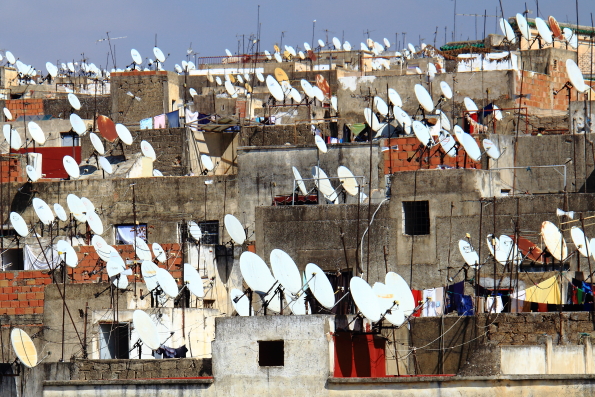