Sights and Sounds of Marrakech

I was lingering uncertainly on the edge of the crowd as mesmerised as the snakes by the music when one of them suddenly lunged towards us and then slithered across the paving stones at great speed. As one we screamed and fled. I was glad I had not paid ten dirhams to take a photo because after being chased away by the subject I had no intention of getting within shooting distance. 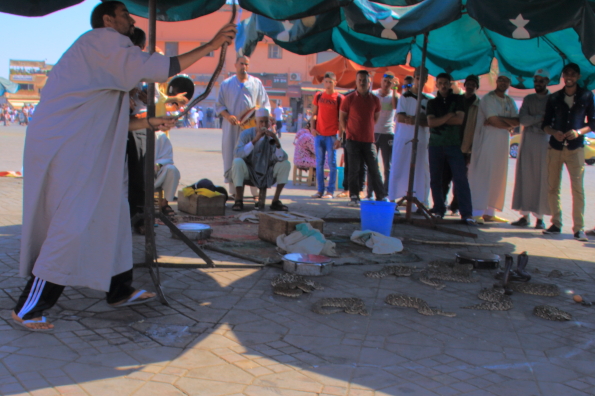 Snake charming was just one of the sideshows taking place in the Djemaa el Fna Square in Marrakesh, our final destination on a tour of Morocco by road and rail. We had only arrived an hour earlier and like most visitors to this city I was keen to experience the atmosphere of this square in the evening. Our group, organised by Solos Holidays arrived as the dying embers of the day cast a glow over the square. Attracted by their bright red poles I stopped to watch people fishing for soft drinks cheered on by their supporters. 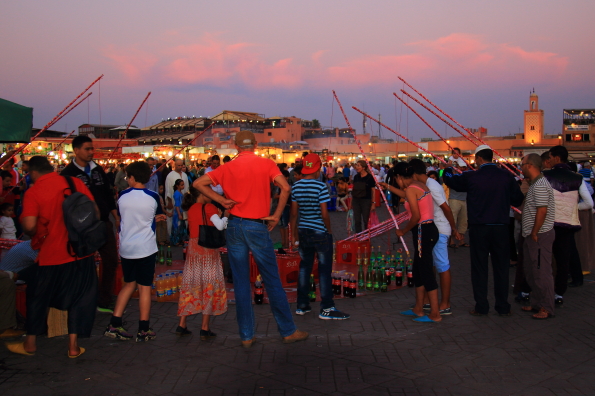 I moved on working my way through pockets of mirth and music as people laughed at street performers while the beating of drums attracted their audiences. I stepped in and out of pools of light and shadow drawn towards the sizzle and scent of cooking food in the centre of a large open area. Swirls of white smoke danced above the makeshift restaurants before spiralling up into the black sky. 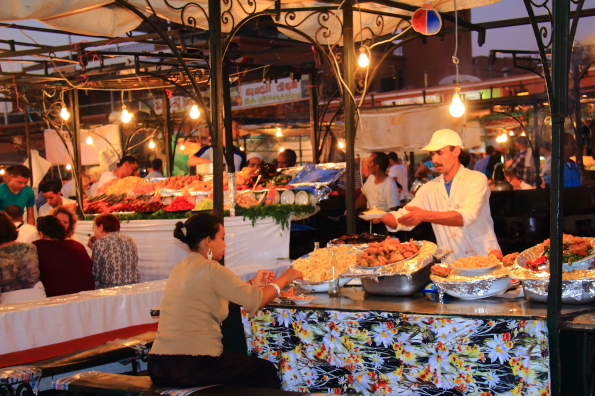 Naked light bulbs illuminated small stalls on the periphery displaying their wares – I loved the bright colours of the ceramics and I was delighted that I was able to browse without being hassled – such a pleasant change from previous shopping forays in this country. 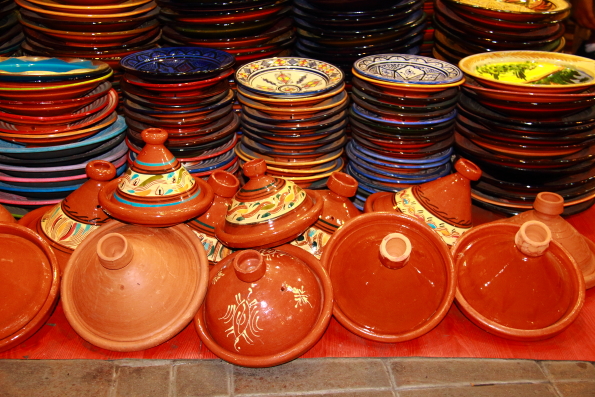 As I made my way out of the square I was encouraged to have a henna tattoo by two women who appeared to be practising on themselves – a henna party. 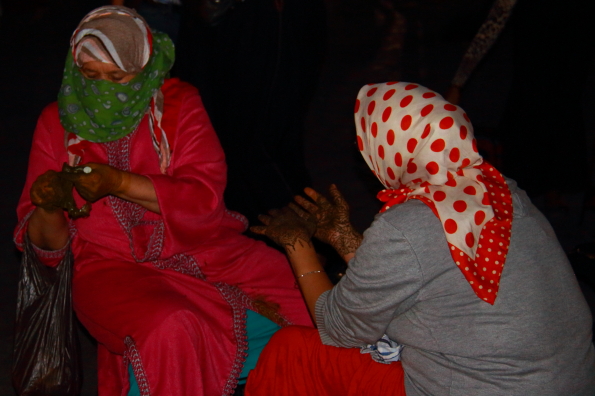 The next morning I was up early and opened my balcony door to be greeted by the sweet sound of birds singing in the trees that populated the courtyard below. Within minutes a new, throaty voice joined in – the call to pray coming from the minaret of the local mosque. A mosque, the famous Koutoubia Mosque was the first place we visited the next morning. We strolled through the gardens towards its minaret, the highest building in Marrakesh enjoying the freshness of the early morning and the glitter of sunlight on the fine spray of the sprinklers that whispered in the background. 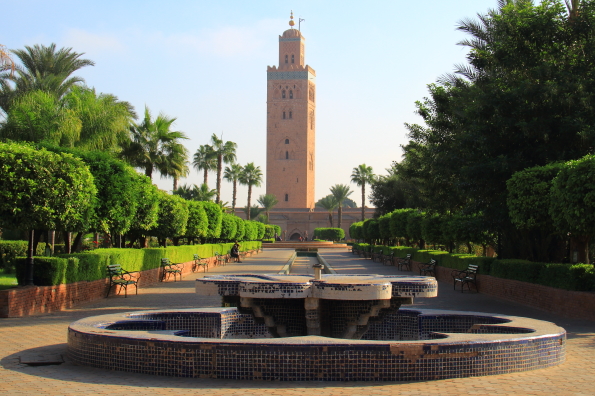 Next on our agenda was the Bahia Palace where ornate carvings and colourful tiles complemented the heavy brown wooden doors that enticed us into the many rooms and courtyards of this lovely building. 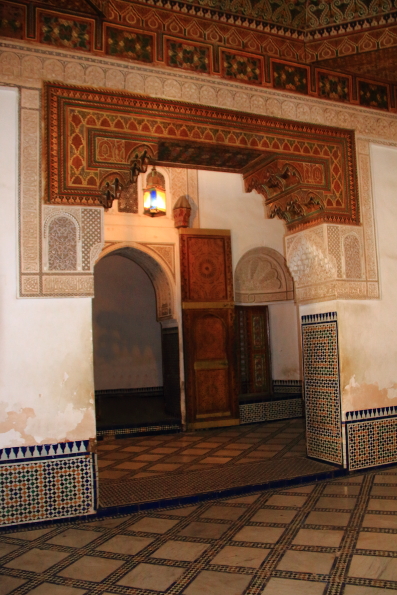 After leaving the palace we entered the narrow alleyways of a souk. The sun, now high in a startling blue sky, warmed the terracotta of the walls that flanked us on both sides as we made our way to the Dar Si Said Museum. Inside we wandered around looking at a fascinating array of old doors and other artifacts from the surrounding region. The source of each door is identified by the manner of its decoration. 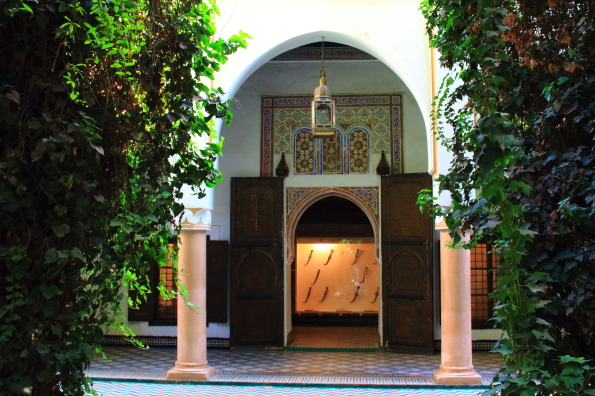 When we left we continued our exploration of the souk. The roar of motor bike engines chased us down the passageways and warning shouts punctuated our conversations. I was fearful for the eggs piled high on the delivery man’s motor cycle as he wobbled past us. 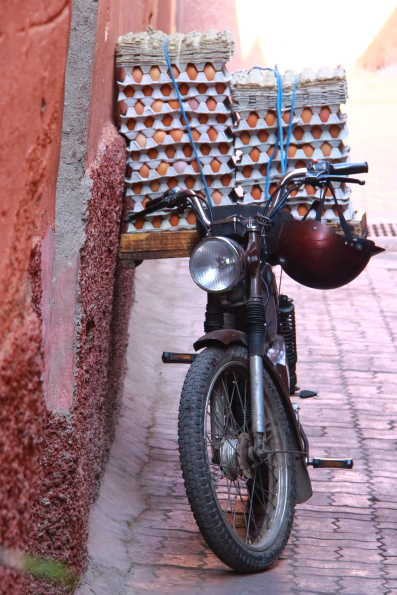 As we meandered along I had to keep stopping to admire the doors on either side of us – plain ones, painted ones, studded ones, faded ones – the variety is endless. I was struck by the paucity of windows but I knew from eating in restaurants and visiting a carpet factory that had once been private homes that these narrow entrances would open out into high-ceilinged spacious rooms. 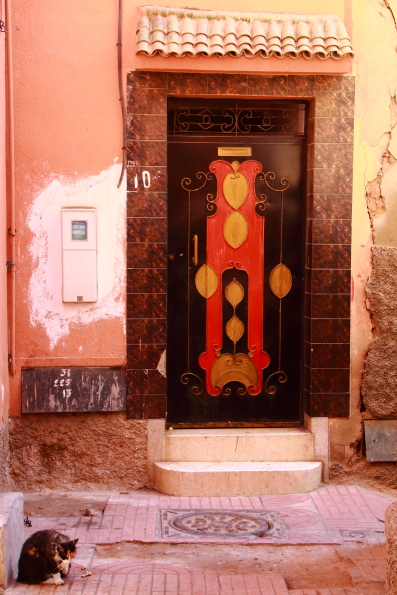 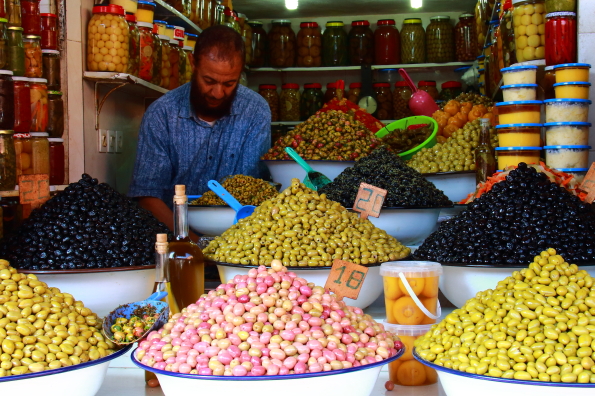 and peaks of coloured spices. 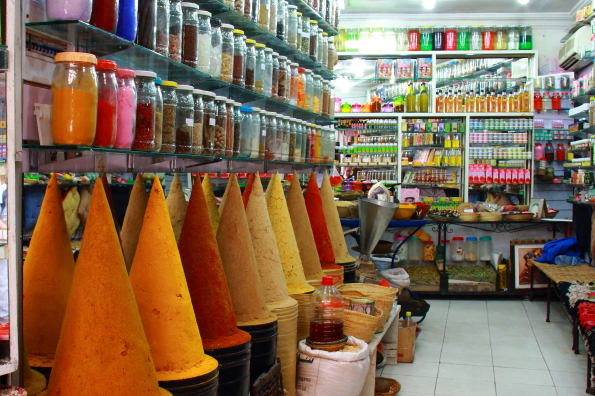 We emerged into the bright sunshine and a sparsely populated Djemaa el Fna Square. Mounds of oranges glowed on the fruit juice stalls and street performers were dotted around the exposed grey surface. In need of refreshment we climbed the stairs to Le Grande Balcon de Café Glacier and after purchasing a soft drink or a mint tea (served in individual silver tea pots) we settled down to enjoy the cool breeze and watch the performers below us. 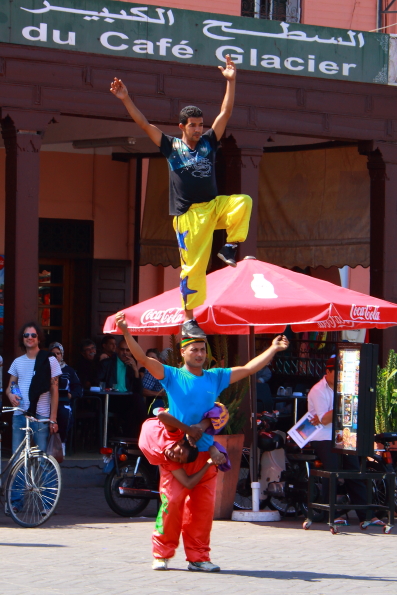 I could have lingered there for the rest of the day watching the kaleidoscope of life ebbing and flowing across the square but it was time to move on.
I was captivated by the Majorelle Gardens and the bright blues and yellows of the decorative pots interspersed amongst the greenery. Visitors respected the tranquillity of this oasis in a busy city where the only sound was the murmur of their voices. 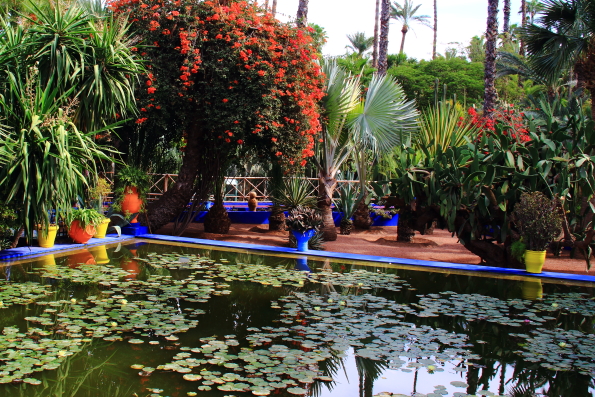 That evening we went back to Djemaa el Fna Square where it had taken on its lively night time persona and once again it throbbed with the performances of both street performers and stall holders exhorting us to sample their food. We chose
Restaurant Chez Aicha as it offered such a wide variety of fish and meat dishes. 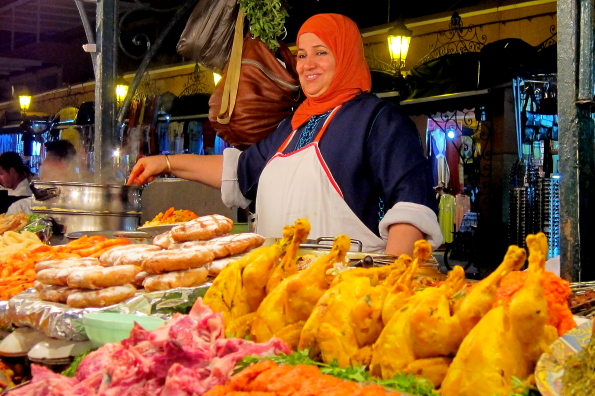 After a delicious meal it was time to leave and as I walked away from the brightly lit stalls into the shadows I passed a solitary basket seller and an old man sawing with his bow at the two remaining strings of an ancient violin. The sound he produced was just as bad as one would imagine it could be but nevertheless the memory of that sound still makes me smile. 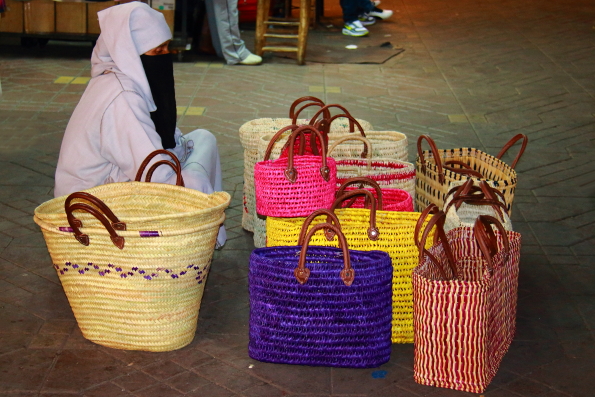 Marakkech has also been voted one of the “fifty most beautiful cities”: https://www.flightnetwork.com/blog/worlds-most-beautiful-cities/ in the world.