Finding Ernö - in the East End of London

I started my quest in typical East End fashion – pie and mash at Maureen’s pie and mash café in the Chrisp Street Market in Poplar. When asked if I would like gravy or liquor I declined the latter thinking that noon was too early to start drinking. I later discovered that liquor is a parsley sauce traditionally eaten with pie and mash. 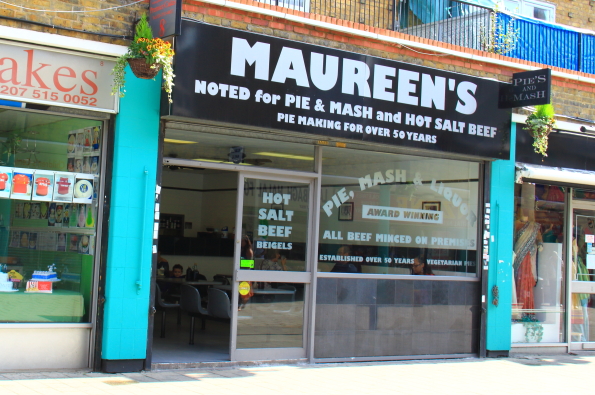 When I had arrived at Langdon Park DLR station it had looked anything but typical East End. I had expected to see narrow streets fringed with terraced houses. Instead, beside the station, was Langdon Park and beyond this grassy expanse I could see the spire of St Michael’s Church, originally a mission chapel built in 1861 but converted to flats in the 1970s. When the church was built it was surrounded by slums. The area had become over-populated due to the operations of the East India Company in the East India Docks nearby. 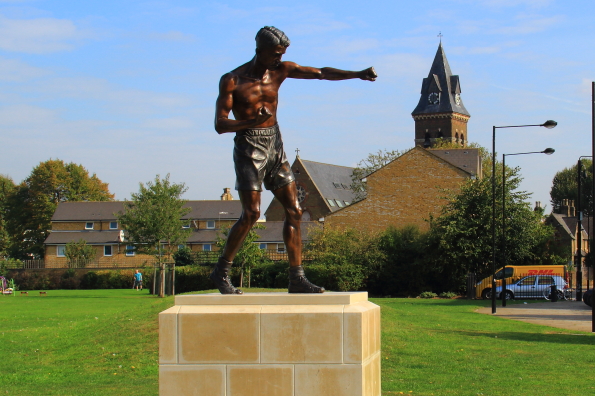 In front of me was a splendid life-sized bronze statue of a wiry boxer. It is Teddy, Pride of Poplar, Baldock who was Britain’s youngest ever world champion. He was crowned the world bantam weight champion in 1927 when he was only nineteen years old. Teddy was an inspiration to East Enders during the twenties and thirties. this sculpture is the work of Carl Payne, and it was placed there in May 2014. The appearance of Teddy coincided with the opening of the Spotlight Centre, resplendent in its reflective cladding, a few yards away. This multi-million pound creative youth space was designed to inspire. This building was completed in December 2013 and officially opened in July 2014 as a youth centre with a programme of activities based in the excellent facilities that include a state-of-the-art boxing gym. Between 10:00 and 16:00 it is a café open to the public. 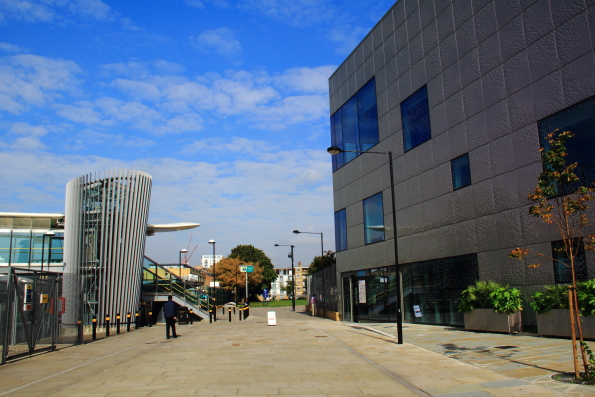 I was surrounded by evidence of twenty-first century re-generation and nothing remains of the slums that surrounded the East India Dock that was built nearby in 1803. The East India Company was the driving force behind the construction of these docks which remained operational until it closed in 1967. Inevitably the docks attracted a large workforce that settled with their families in the area resulting in an increase in the population and serious over-crowding in the small houses. By the 1930s there were already plans to build social housing but it was difficult to find suitable sites in such an over-crowded area. However the Second World War intervened and the area suffered badly with twenty-five per cent of the buildings being destroyed. It was an ideal opportunity to implement plans for social housing in the area. A major project was the Lansbury Estate. It was planned by the London County Council who wanted to reduce the size of the population in the area and named after the Labour MP George Lansbury Built during the 1950s the first phase was featured in the Festival of Britain – as a ‘live architecture exhibition’ -a tract of housing that the public could walk through and experience on a real scale. It was intended that the majority of the buildings were finished, with some partly constructed to show off methodology. Whereas it may have looked cheap at the time it has proved to be a model of quality today. It was arranged as a series of neighbourhood groups of mixed housing with some “festival-style” touches such as the Frederick Gibberd clock tower with a viewing platform where visitors could see the whole area. 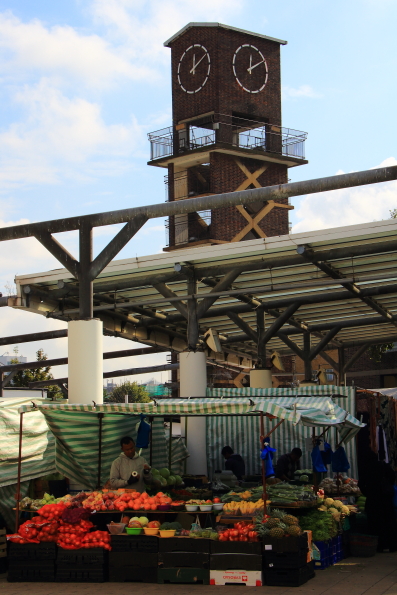 The Chrisp Street Market, the first pedestrianized market place, was also designed as part of the Festival. At the same time the Catholic church by Adrian Gilbert Scott in Poplar London)! was built to replace the original church that was bombed during the war. 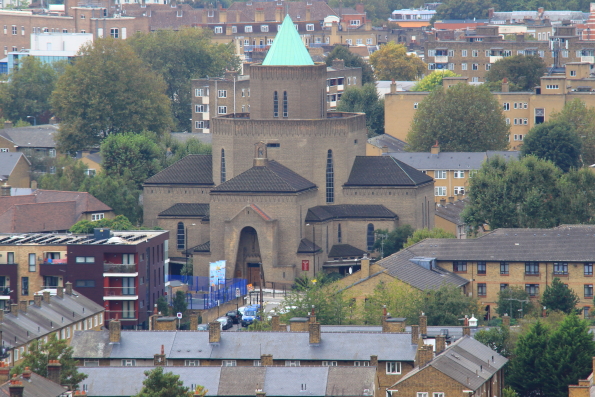 Waiting in the wings while this development was taking place was the architect Ernö Goldfinger anxious for an opportunity to put his ideas for high-rise social housing into practice. Goldfinger had already created a stir when he built is private residence on Willow Road in Hampstead – of concrete. Both the design and materials were greeted with distaste by local residents but eventually he succeeded in his ambition to build in the Brutalist style – an unfortunate name for constructions made from raw concrete. Ian Fleming has been quoted as one of the opponents to the house in Willow Road hence his use of the name Goldfinger for his character in his novel of the same name. Ernö embarked on legal action to protect his name but the matter was settled out of court when the publishers paid his costs and gave him several copies of the book. 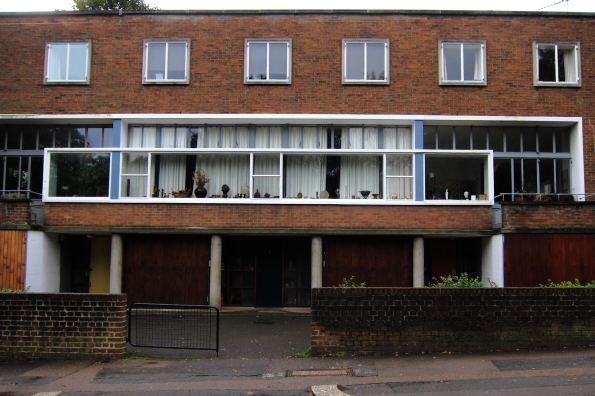 Willow Road is now the property of the National Trust and open to the public. A visit to this property shows another side of Ernö – the unsung hero of furniture design. The house is full of items designed and built by Ernö, interesting features and extensively decorated with works of art many of which were the work of close acquaintances. 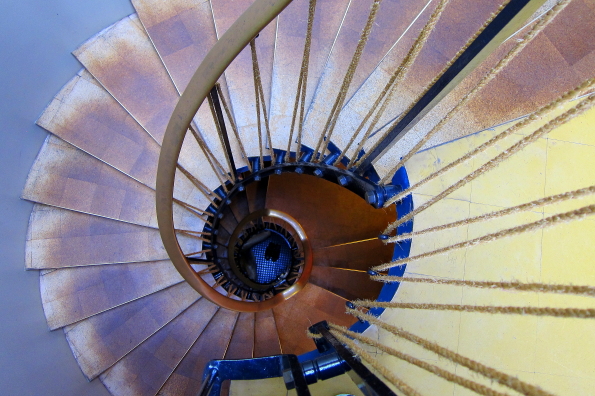 Leaving the market behind I crossed the road and set off down Willis Street and through the Brownfield Estate passing some low rise social housing designed by Goldfinger towards my objective, Balfron Tower. Ernö had finally been rewarded by a commission to build high-rise social housing and created the 26 storey tower. It is distinctive because the utilities, including the lifts, boiler room and rubbish shutes were built in a separate tower with walkways into the main block. There are only nine walkways to access the twenty seven floors. They give access to corridors designed to mirror that narrow streets from which the occupants had come. Behind each front door is either two short flights of stairs going up into the flat on the floor above or stairs descending to the flat on the floor below. Every third door opens directly into the flat on that level. It is an ingenious design. 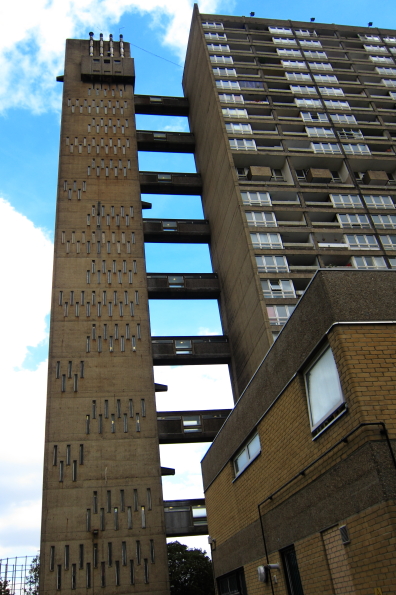 Flat 130 on the top floor was briefly occupied by Ernö and his wife Ursula soon after the block opened in 1968. And it is this flat that has been re-created by the National Trust in the style of the period. 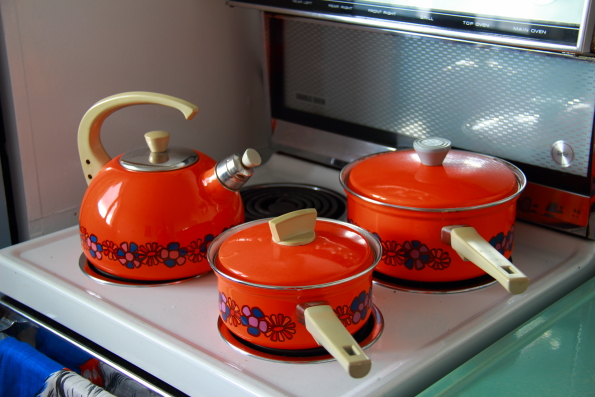 During their brief sojourn here Ernö entertained the residents to promote sociability, although waiting for one of the two lifts was probably more successful in this endeavor – and Ursula kept notes of the comments occupants shared with her. Long waits for the lifts, the difficulty of cleaning the windows and lack of instructions regarding the heating system – circulating hot air – were the most popular and some were rectified in his next project, Trellick Tower. This tower was built to the same design but the utilities tower had 3 lifts. Overall the new tenants were happy with their accommodation which was light, spacious and included an indoor toilet. 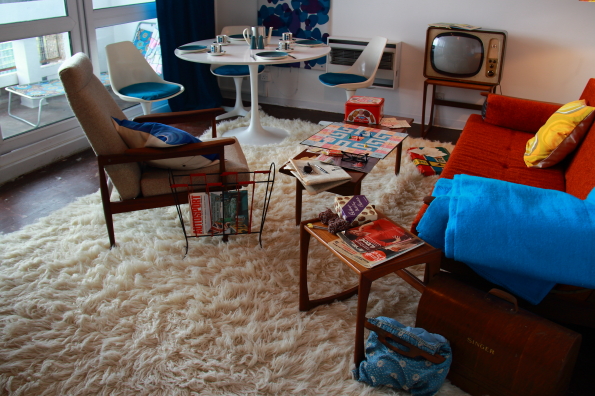 Had Goldfinger finally achieved Utopia? Fate was to intervene in the shape of the Ronan Point disaster when an explosion in this concrete high rise block of flats caused serious damage and several deaths. The fall out of this disaster and problems with vandalism in Trellick Tower led to a serious decline in the popularity of high-rise social housing. There was a popular misconception that concrete high-rise buildings were all dangerous. The technique used by Goldfinger, to pour liquid concrete into a mold on-site rather than assembling ready-made blocks on sit was much safer and has withstood the test of time. Balfron Tower achieved a grade 2 listing in 1996. It is due to be re-furbished in the near future and most of the occupants have been rehoused by the current owners – Poplar HARCA (Housing and Regeneration Community Association) a registered social landlord – after which the flats will probably revert to private ownership. Meanwhile through collaboration between HARCA and the Bow Arts Trust some of the empty flats are being used by artists as a place to live and work.
The National Trust has taken advantage of this interim period to open Flat 130 to the public for two weeks – so I was able to explore the interior as well as admiring the exterior of both Balfron Tower and its sister block Carradale House. 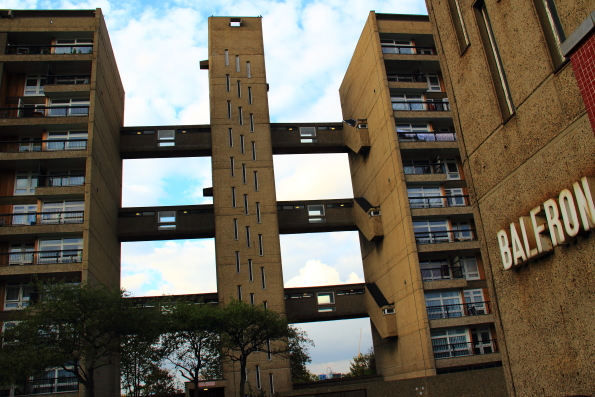 I had succeeded in my search for Ernö a man who was famous for quoting “the whole object of building high is to free the ground for children and grown-ups to enjoy Mother Earth and not to cover every inch with bricks and mortar.” In reality the occupants of Balfron Tower were happy to stay on their balconies behind a small garden on the top of the enclosing wall enjoying the fabulous view. 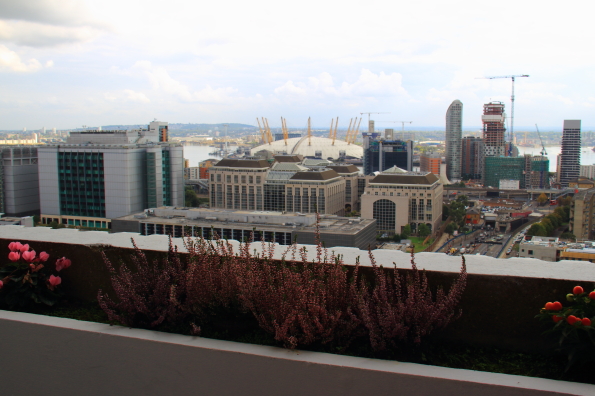