The Road to Trento

Our first historical signpost on the road to Trento is Castello Toblino. Resplendent on its own peninsular surrounded by a lake of the same name this was once the summer residence of the Prince Bishops who wielded both temporal and religious power over the region of Trentino between 1027 and 1796. The main residence of these rulers was the Castello del Buonconsiglio which we would come to later. Castello Toblino is now a restaurant and the lake is surrounded by boardwalks for those who have time to linger. 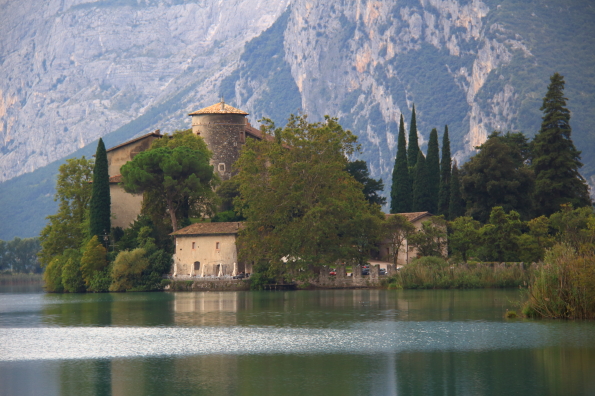 As we entered the town of Trento we could see, perched above us on the cliff face the impressive circular monument to one of Trentino’s most famous partisans, Cesare Battisti. He was born in Trento in 1875 and became one of the leading members of the Irredentist movement, an association that was initiated in 1870 around the same time as the the rest of Italy was unified. Despite being part of the Austro-Hapsburg Empire Trentino had always remained Italian in language and culture and many of its inhabitants supported this attempt to liberate them. This was true of other areas that were part of the Austro-Hapsburg Empire and the Austrians fiercely suppressed this movement. Trentino finally became part of Italy in 1918 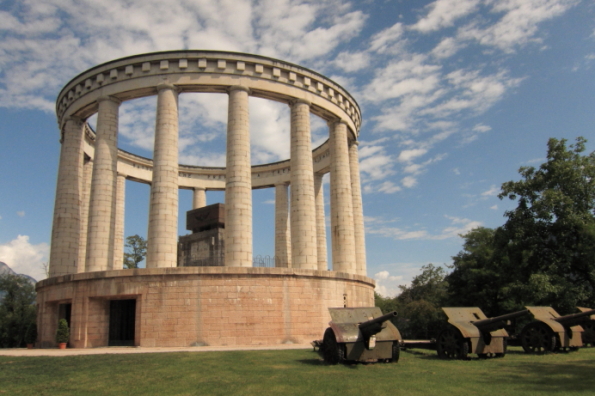 At the start of the Great War Battisti refused to fight for the Austrians and went to Italy where he joined the Italian mountain army, the Alpini. When he was captured in 1916 he was denied Prisoner of War status and found guilty of treason. He and two compatriots were hung in the moat of the Castello del Buonconsiglio. The rope broke at the first attempt to hang him but contrary to tradition his death sentence was not commuted. Instead a new rope was sent for and the sentence carried out. Although condemned as a traitor in Austria Battisti was considered a patriot, hero and martyr in Italy as evidenced by the many streets and piazzas that have been given his name. On the same hill as the monument to Battisti is a museum celebrating the army he fought for, the Alpini . 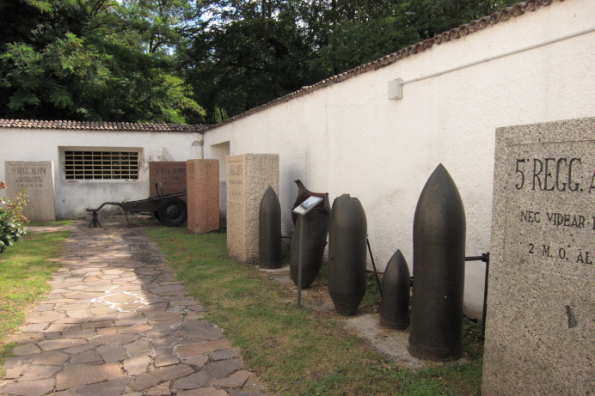 We arrived at the Castello del Buonconsiglio and went inside to explore this fascinating building and the current exhibition housed within the many interesting rooms. Despite being used as barracks by the Austrian army when Trentino was given to the Hapsburgs by Napoleon in 1803 it is in very good condition and an excellent example of the architecture of the three periods it spans. It is composed of a series of buildings, enclosed by walls and positioned slightly above the city. Castelvecchio is the oldest building and is dominated by an imposing tower. The Magno Palazzo is a Renaissance-style 16th century expansion commissioned by the Prince-Bishop and Cardinal Bernardo Cles (1485-1539) and the Baroque-style Giunta Albertiana dates from the end of the 17th century. 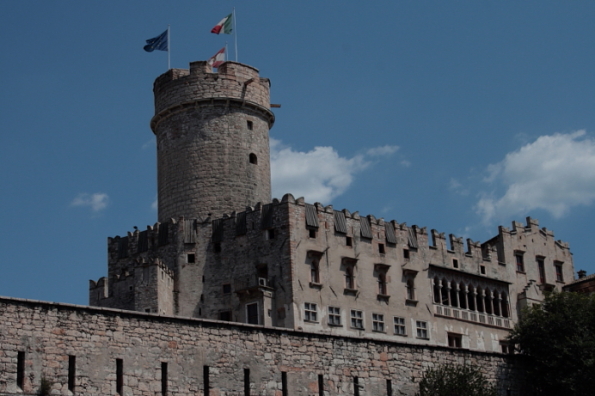 The highlight of our tour was viewing the unique painting of the late Middle Ages, the Ciclo dei Mesi (Cycle of the Months) that decorates the interior of the Torre dell’ Aquila at the southern end of the castle. An audio guide provided some background history and a fascinating explanation of the content of the paintings and the techniques used in those days to produce such detailed representations of the daily life of that period. When we finally emerged into the bright sunlight again we discussed our experiences over a snack lunch under the cool shade of a large white sun umbrella outside the small café in the castle grounds. 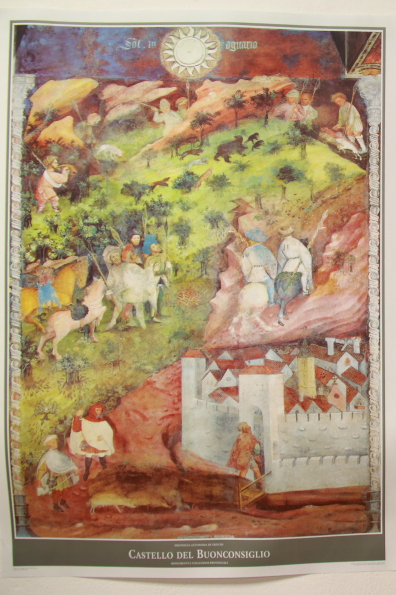 Strolling along the Via Antonio Manci we retraced the steps of the Prince Bishops between their splendid residence and their private church, the Duomo (Cathedral), where they worshipped. The importance of this route was reflected in the magnificence of the buildings that lined the street. Palazzo Geremia is a prime example. It was built at the end of the fifteenth century and it is a good example of Renaissance architecture and decorated with typical Venetian stonework and windows. An anonymous artist painted the frescoes on the façade highlighting moral subjects such as Emperor Maximilian the First’s meeting with citizens. The building was occupied by Cardinal Ludovico Simonetta during the Council of Trent.
As Trento was strategically positioned on the main route from Northern Europe to Southern Europe it was acceptable to both Italians and Germans as the ideal meeting place for the Council of Trent which began in 1545. To accommodate the members of the council there was a flurry of building grand renaissance residences in the town itself and also in the surrounding area so that they could retreat from the heat of the city at night time. The Council sat for much longer than was anticipated due to plagues and floods and finally ended in 1563. It was called to discuss the differences between Catholic and Protestant teaching. 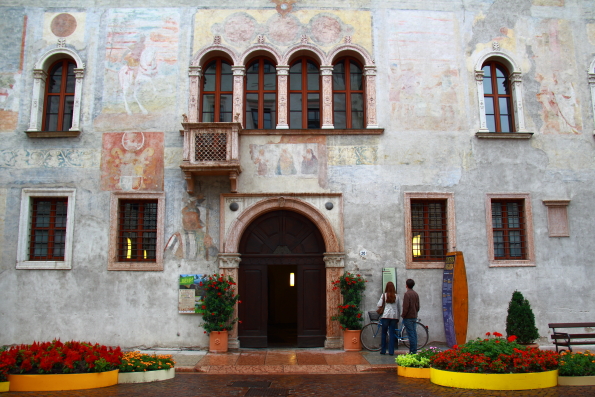 Via Manci is still punctuated with narrow alleys that once led down to jetties on the river but now they emerge onto Via Torre Verde that was built along the old river course. The arcades at the junction with Mancini Suffragio were originally built of wood and it was here that the Hanseatic traders from Germany sold the goods they had brought down the river. Further down this road we could see the medieval Torre Verde Green which was built to defend the port on the river and where ships loaded with goods had to pay the tolls imposed by the Prince Bishops. When the railway was built in 1850 the course of the river, the River Adige, was diverted and now flows round the perimeter of the city. The advent of the railway dramatically reduced the traffic on the river. 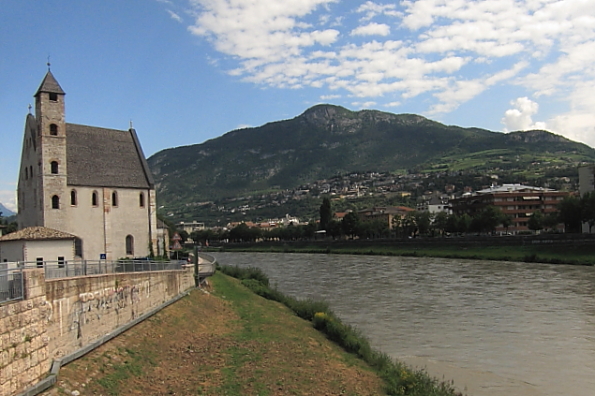 As we approached the centre of the town we passed Piazza Battisti from which there is an entrance to the Roman city of Tridentum. This name was derived from the fact that the original settlement was surrounded by three hills or ‘teeth’. When we entered the main square, Piazza Duomo, it was largely occupied by the stalls of the weekly market. We stopped for a coffee in one of several bars that ring the piazza to enjoy the bustle and colour of this lovely square. 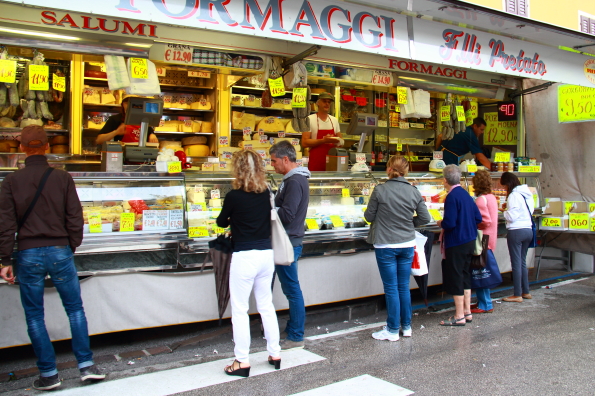 The tall, narrow stone tower is the oldest building in the square and was built in 1000. It was the first building in Trento to be constructed in stone and the small cell windows are a testament to its original purpose – a prison. The building next door, the Palazzo Vango, was built by the Prince Bishops who lived there until they moved to the castle. While enjoying our break we had time to admire the lovely frescoes on the buildings around us which were painted at the beginning of the sixteenth century. The Duomo was Romanesque style reflected by the wheel of fortune on the outside wall, typical of this architectural style. As the Duomo took 200 years to build, the outside and the inside reflected very different styles as it was finally completed during the Gothic era. 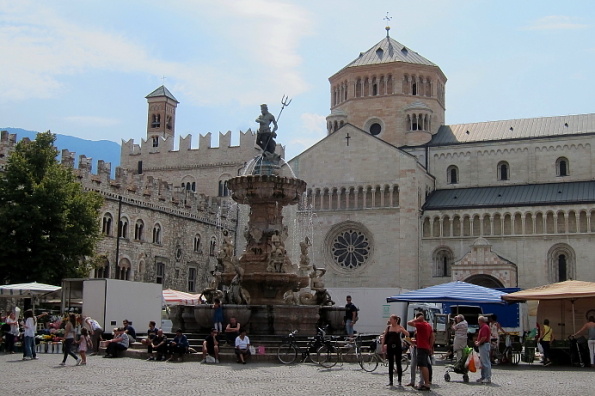 A new addition to this hitherto traditional city is the very contemporary il MUSE. This exciting new museum opened in July 2013 and it is so much more than just a museum. Structurally it was designed by the Italian architect Renzo Piano (he designed the Shard in London) to reflect the mountains that surround it. It is the centrepiece of a large reclamation project that has turned an abandoned industrial area into a residential area, le Albere, encompassed by a large park dissected by small canals and including shops, offices and recreational areas. It is eco-compatible employing solar panels and to generate power for the whole district. A cistern collects rain water to be used inside and outside the building. It took us ten minutes to walk there from the city centre and was an interesting conclusion to our tour of Trento and was the subject of my last blog post. 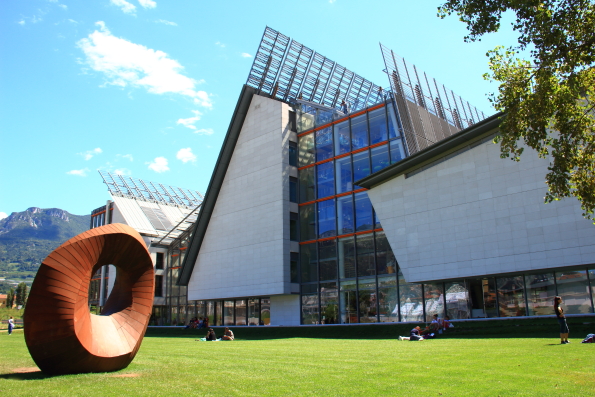