Trento, the regional capital of Trentino in Northern Italy and famous as the host for the Council of Trent nearly 500 hundred years ago is now achieving fame as the home of a unique museum MUSE. 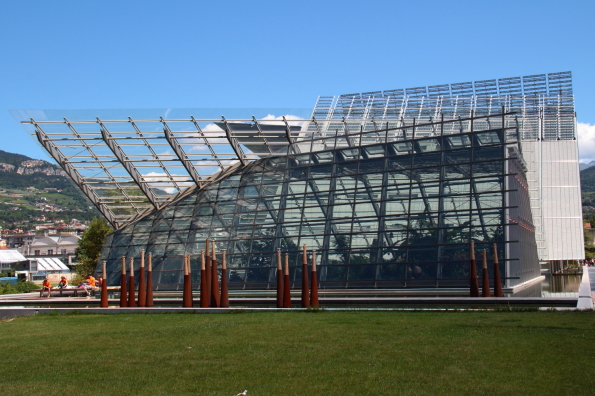 MUSE was designed by the Italian architect Renzo Piano who also designed the Shard in London. The shape of this building is a reflection of the mountains that surround it. It is eco-compatible as it employs photovoltaic panels and geothermal probes that support a combined cooling, heating and power system for the whole district. A cistern collects rain water to be used for sanitary purposes, irrigating the greenhouse, fresh water for the aquariums and the moat surrounding the building. Its sustainable design and construction techniques have allowed it to obtain the Silver LEED® certification. But it is not just the one building as MUSE is part of a project to reclaim an abandoned industrial area that was formerly occupied by the Michelin factory which has become part of the city through the spread of its borders. This huge project that encompasses shopping, residential and office areas as well as recreational and cultural areas is known as the urban quarter Le Albere. 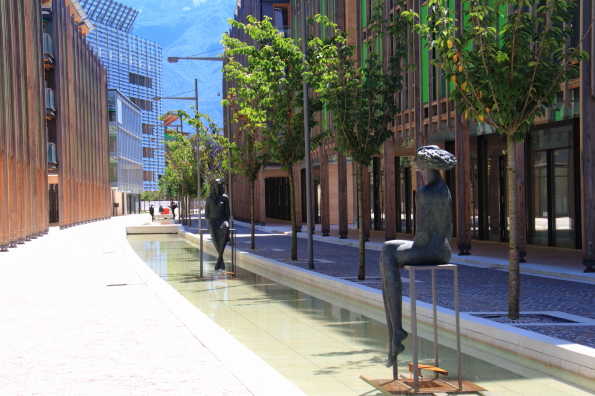 The whole development is contained in a park criss-crossed by small canals and the site of open air exhibitions of sculptures. After visiting the museum I strolled around the park where people were having picnics on the grass or sitting on the benches by the water. It was a very relaxing environment. 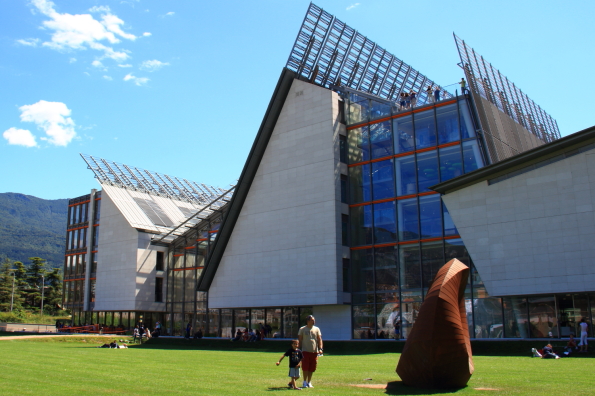 I began my visit to MUSE on the fifth floor, a terrace overlooking the mountains and surrounding area. From my viewpoint I could see the Adige River and the cycle track alongside it. The project encourages the use of bicycles by the provision of a bicycle parking area equipped with showers and changing rooms. 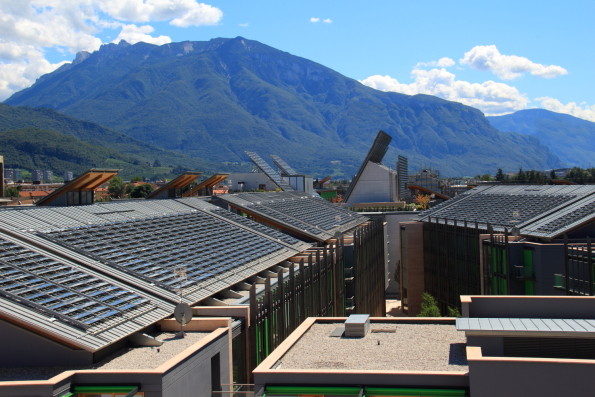 I walked down to the fourth floor and stared into The Void. Below me I could see all the levels in the museum and at the bottom the skeleton of a dinosaur in the pre-historic section stretched out across the last floor. Birds are suspended in this space and animals perch on ledges – it is a mixture of a traditional natural history museum and a modern science museum. 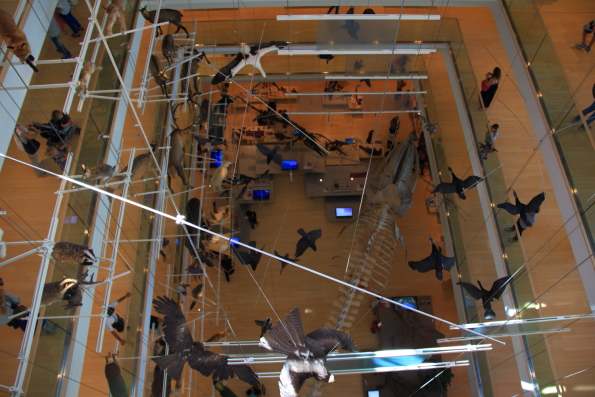 On this floor I explored the high peaks by walking through the glacial tunnel which gave me the sensation of flying above the peaks, I walked along a ledge and stroked a chamois and touched some ice and finally watched a video of animals associated with extreme conditions. I was impressed by the layout which allows visitors to move freely among the exhibits. Short explanations are written in three languages, Italian, English and German and these three languages are also available on the videos and computer screens that are scattered throughout the museum. Telephones are attached to some of the computers so that visitors can listen to the commentary and tablets are available to hire for €1 and the deposit of a passport or driving licence. 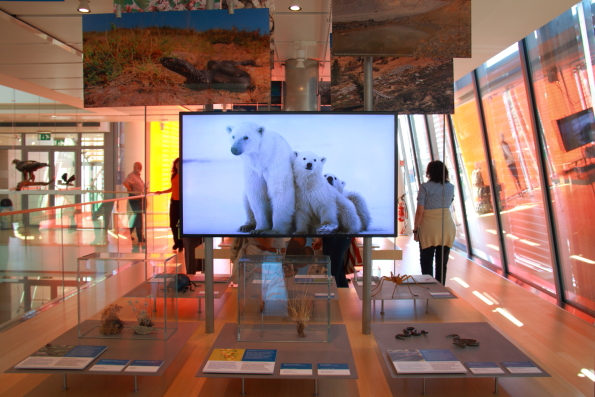 I took the stairs down to the next floor where I watched children exploring the play forest and lamented the fact that I was too old to join them as it looked so much fun. This floor also features nature in the Alps and I wandered through the labyrinth of bio-diversity and learnt about the changing seasons. It was fascinating to see how wild animals adapted to the change in climate as several animals are exhibited wearing both their winter and summer coats. It was interesting to experience close proximity to a brown bear and to see camosci capering on a ledge – I had only ever seen the latter in the distance before. 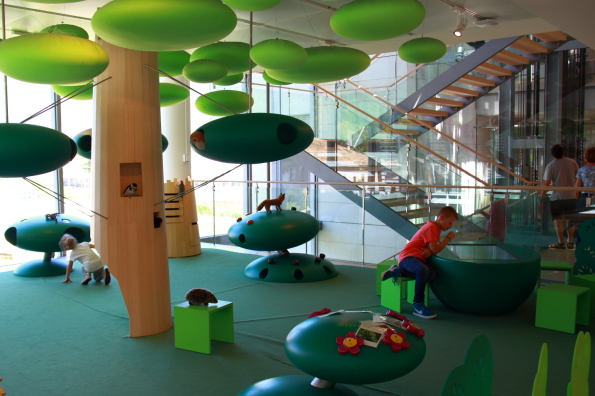 The second floor features some hands-on experiences as it explores the geology of the Dolomites and the sustainability of the resources of our planet and the environmental risks of activities such as mining. This floor also features temporary exhibitions but I have to confess that the current one – concerto per natura morta (a concert for dead nature) by Roberto Pugliese which comprised dead trunks of trees suspended from the ceiling defeated my comprehension. 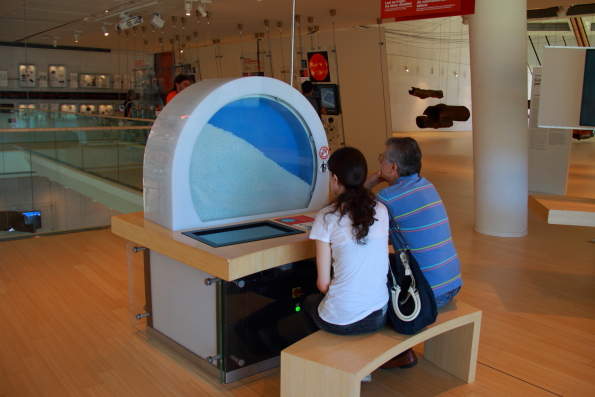 The Time machine, on the first floor, is a multimedia cave that explores prehistoric life. Here I came across the figure of a young girl that looked so lifelike I was convinced it was a real person. I watched her for ages in the expectation that she would blink. I wanted to pinch her arm but dare not. I walked slowly away and the turned suddenly to see if she relaxed at all. She did not. This floor also features the Fab-Lab and I was fascinated by the 3-D printer that was busy creating a miniature bright pink monster. Next to the MUSE FabLab is the “Innovation Showroom”. This area is dedicated to start-ups or innovative firms invited to present their products, not for sale but for showing us how sustainability-oriented innovation is part of the process of development and growth of a territory’s ability to invent its own future and construct creative and quality job opportunities. This floor also features Alpine pre-history and research behind the scenes (the laboratories that are open to the public at certain times of the day so they can watch scientists at work. The message is that each and every one of us can be a part of the research, innovation and the collective debate that can help build our own future. 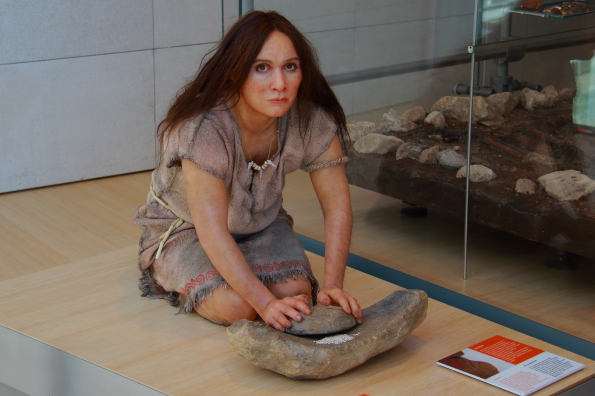 Back on the ground floor I discovered a hive of inter-action in the science gymnasium. It was a pleasure to watch parents and children working together to build arches with coloured blocks and lift heavy weights. 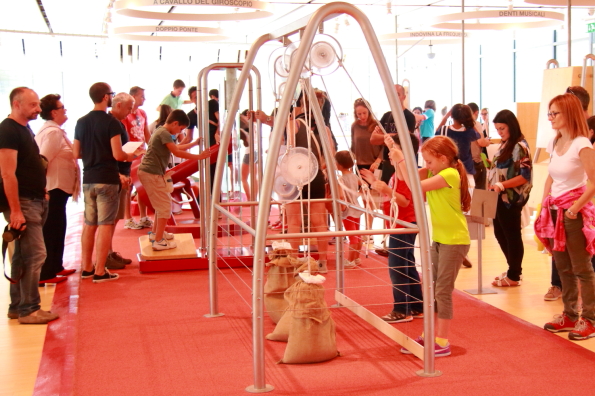 In the pre-historic I found the largest exhibition of dinosaurs in the Alps. Some of the skeletons had scavenging animals perched inside them. Here I also embarked on a voyage to discover the “unit of measurement of life”, Darwin’s extraordinary discovery and the roots of human nature through the research conducted on DNA. Beyond these exhibits was another area set aside for temporary exhibitions and I lingered here for a while enjoying the Bio Diverse paintings of Maurizio Boscheri. 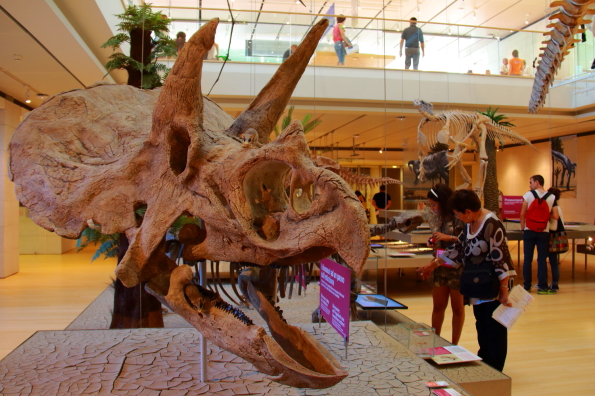 My journey from the cold peaks of the Dolomites ended in the humidity of a tropical rainforest where plants endemic in the Eastern Arc Mountains in Tanzania are grown. I was particularly impressed by the deep purple of the African Violets and soothed by the rushing of water in the waterfall. 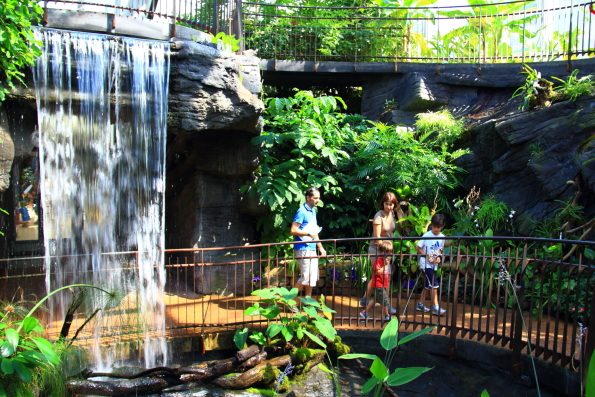