I was doubled up with laughter as the stars of the show had finally arrived at full gallop and their audience had scattered. Once we had reached a safe place we watched the celebrities, a few hardy heifers, disappear in a cloud of dust and hooves. When order was restored the parade, only half way through, resumed and the rest of the twenty finalists for the title of Cow Queen and their bovine supporters paraded sedately down the high street. 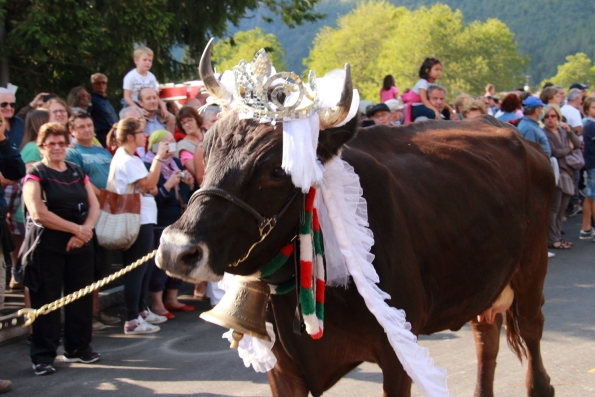 It was the Festa dell’allevatore della Val Rendena (a festival celebrating the Val Rendena breed of cow) in Pinzolo a small town in the Dolomites. In the summer the cows from the valley are taken to a summer farm (malga) on the mountain. These are scattered throughout the alpine meadows of the Dolomite Mountains. The cows are milked every evening and cheese and butter is made the following day. Many of these malgas have small shops selling their produce. At the end of August the cows are taken back to their winter quarters often being herded down the roads. In Pinzolo it has become a tradition to celebrate this event with a parade including the best heifers and during the preceding week other events take place around the town and on the slopes above. 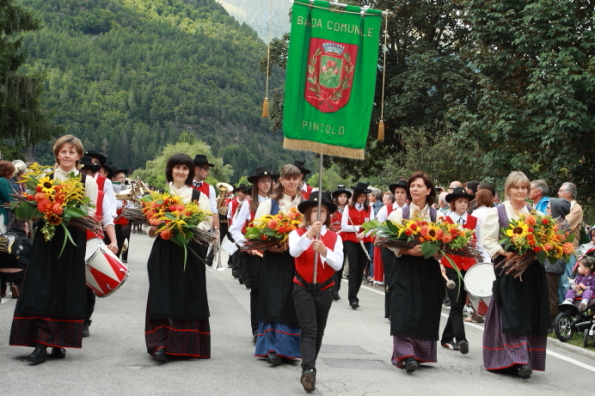 Before the parade the participants, including the heifers, gather in a large field. Their proud handlers adorn their charges with hats, mushrooms, flowers and other paraphernalia that indicates membership of a particular herd. These decorations are echoed in the buttonholes of their handlers. The men are dressed in black trousers, white shirts and black waistcoats while the ladies were voluminous black skirts white puffed-sleeve blouses and coloured aprons. There is a constantly clanging of bells hung round the animals’ necks on beautifully embroidered bands. 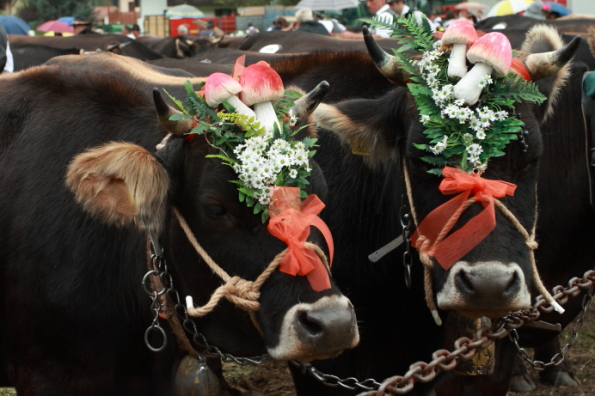 Excitement mounts as the other participants arrive. A small trap carrying a huge milk churn is followed by a long cart laden with whole trunks of trees and then a horse-drawn fire engine. Participants in traditional costumes fuss round them adding the final touches – flowers, ribbons, bows and bundle of straw. In a far corner some beautiful palomino ponies, nostrils flaring and cream manes flowing, as they sense the anticipation of the crowds milling around them. 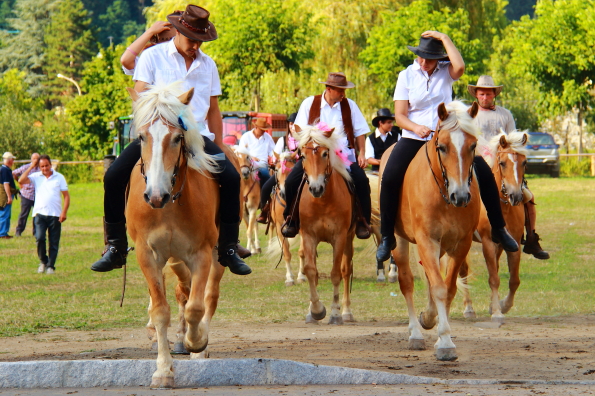 At last an ordered line is formed headed by the town banner accompanied by town officials and then come several local bands resplendent in their respective uniforms interspersed with the decorated carts. This ensemble waits patiently for a while but as time passes the young children begin scampering around greeting friends in the waiting crowds. Cameras flash as individuals pose with the participants and the whole atmosphere is very relaxed until a whistle is blown and everyone snaps to attention and the crowds melt away. The front half of the parade moves off before the heifers are ready and the first group to be released from their restraining ropes attempts to rectify this omission by galloping across the field and scattering the spectators lining the road. 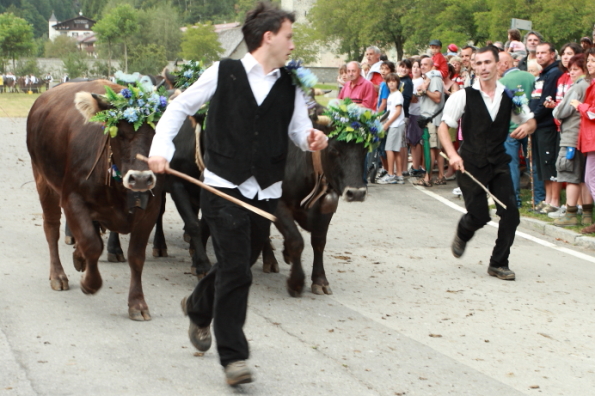 A long pause follows and I took the opportunity to return to the field to see what was causing the delay. It was mayhem. Cows in straw hats were charging around the open space bucking in defiance as their handlers chased after them. A farmer with a donkey was having trouble controlling its offspring until a spectator took control of the wayward youngster. A herd of very well behaved goats moved smugly forward and filled the gap. The remaining participants fell in behind them. 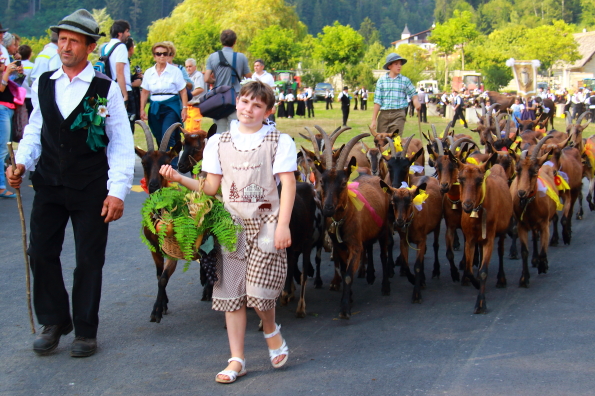 I was a happy coincidence that I had been in Pinzolo. Earlier that day I had lunched at a polenta party – another very traditional event in this region. It was held in the garden of an old summer farmhouse built in 1862 in the little valley of Plaza a few kilometres from Pinzolo. The owners also had properties in Pinzolo where they lived with their animals in the winter when these farms were inaccessible due to the snow. Although the building was no longer used as a farm there was still evidence of this purpose. The animals had kept on the ground floor, the lived on the floor above kept warm by the presence of the animals and the third level was the hay loft from which hay would be dropped to the cows below through a hole in the floor. Most of the farms scattered across the valley floor were now summer residences although there were still patchworks of cultivated land amongst the trees. 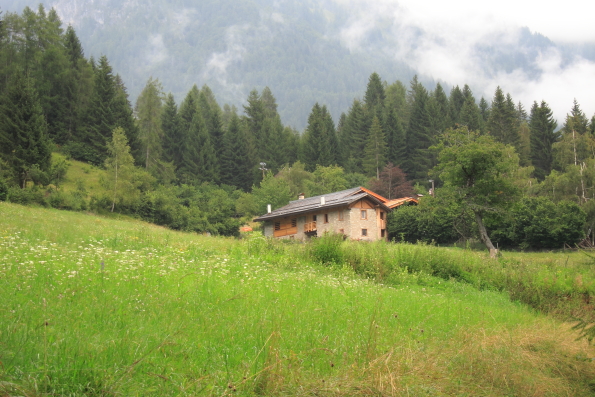 I watched as mounds of soft polenta were stirred in a paiolo (copper pot) that looked like a witches’ cauldron with a trisa, a long wooden spoon that resembles a paddle. Trisa comes from the verb trisare to stir and at one time Val Rendena (the valley that encompasses the whole area) was known as the Valle della Trisa as the inhabitants used to make polenta every day. Copper pots are used because copper spreads the heat evenly. Despite its ordinary appearance polenta has an extraordinary history. It has risen from the ranks of the Roman army to the tables of gourmet restaurants. In ancient times polenta was the staple diet of the poor. It was made from a powder mixed into a paste using water and then baked on a hot stone over a fire. At first this powder was made from wild grains but then as farming techniques developed they would use primitive cultivated grains and also pulses such as chick peas and broad beans. Anything that was edible and that could be ground into a powder would be used and in this locality that had included chestnuts because Carisolo, just beyond Pinzolo, had once been surrounded by a large chestnut wood. 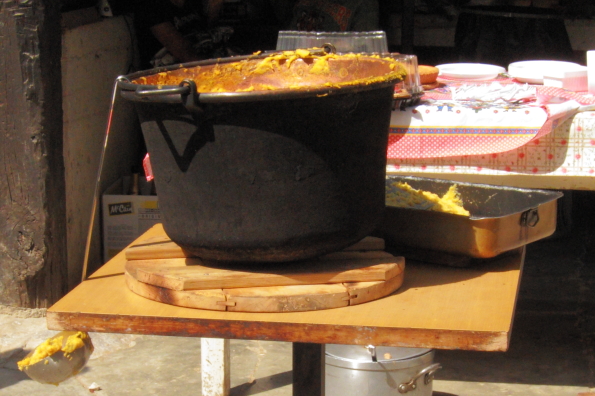 During Roman rule polenta (then known as pulmentum) was a favourite food due to its simplicity and tastiness and was eaten either as porridge or in cake form. When the Saracens arrived in Italy they brought buckwheat into the country and this started a revolution in the processing of polenta hitherto made by grinding wild grains, pulses and chestnuts into a powder. Buckwheat is very nutritious and it is still popular in Tuscany for making polenta and in Northern Italy as the basic ingredient for grey, coarse pasta called pizzoccheri. 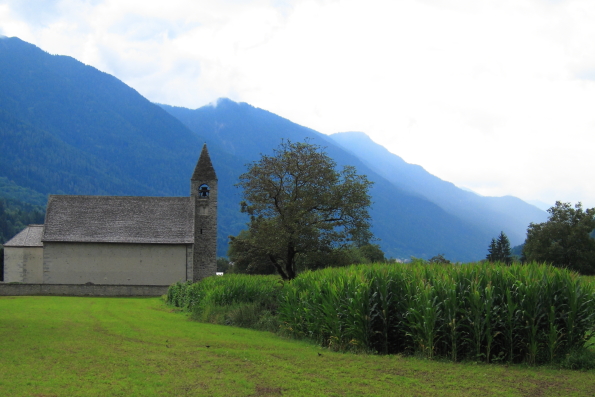 During the sixteenth century the constituents of polenta changed again with the arrival of maize from the New World because landowners in northern Italy discovered their land was ideal for growing this profitable crop. Vast acreages were planted leaving the peasants no option but to use this grain to make their polenta. But it lacked the nutrients of earlier forms of this dish and led to a deterioration of their health. Nevertheless it was still a tasty dish and people continued to eat it, and still do but nowadays the flour that is used is a mixture of maize and buckwheat. Polenta is still a major component of Italian cooking and in some areas it is cooled and sliced and eaten as a supplement to a meal instead of bread or used as an accompaniment for strongly flavoured stews, melted cheese or mushrooms. Traditionally the polenta is poured onto a tavello, a wooden board, in the centre of the table and participants of the meal take a slice each. Delicately sliced and layered with parmesan cheese this versatile food appears as a starter in top class restaurants. 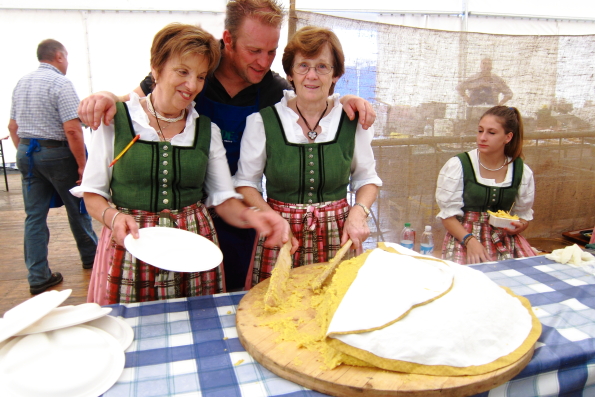 Today my polenta was served with a variety of grilled meats and while I ate I chatted with descendants of the original families to settle in this area. It was a chance to ask why the granite slabs I had seen in a pavement in the centre of Pinzolo had the names of cities all over the world written on them. Just before this paved area there was a statue of a knife grinder (moleta) with his barrow but there did not seem to be an obvious connection between this figure and the eighty-nine names that started in Trieste, Italy and finished in Wellington, New Zealand passing through London, Lucerne and Chicago on the way. As the story unfolded the explanation was simple – each of these towns had received knife grinders from Pinzolo in the past. 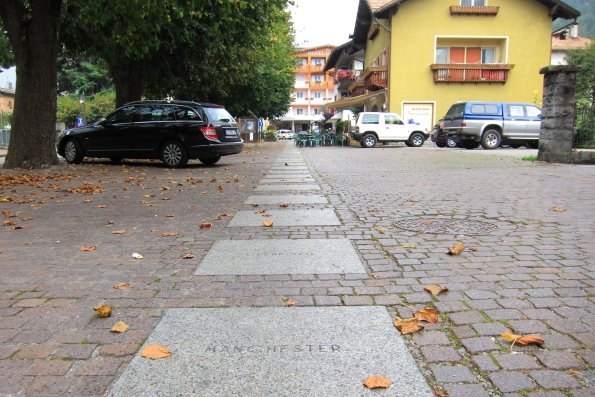 Before the advent of tourism timber had been the most valuable resource and that there had been six saw mills in operation along the River Sarca that wound its way through Pinzolo. Skilled workers were needed when to sharpen the blades when these mills were mechanised. There was not enough work for all the men who learnt this skill and also the work that was available was seasonal as the mills only operated in the summer. Many of these men became knife grinders and would go further afield seeking work pushing their barrows sometimes as far as towns such as Bologna or over the mountains into Switzerland. They would go from door to door offering to sharpen knives and as they built up regular rounds many decided to remain there permanently. 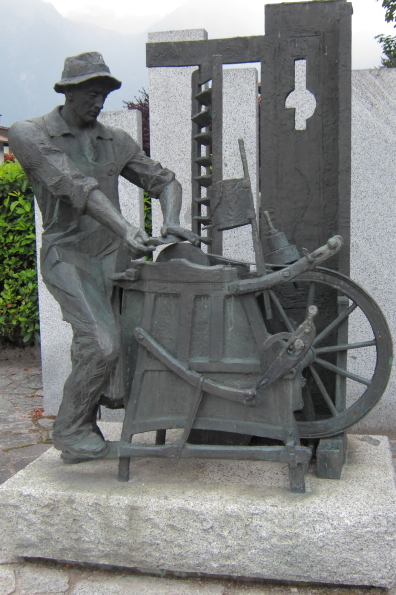 Times were hard for those who remained in Pinzolo and many relied on the money that was sent to them from relatives working abroad. When the local mountains became a popular place for skiing and walking these families were able to benefit by opening hotels, holiday apartments, restaurants and bars. The area continues to prosper and some descendants of the emigrant families have returned to Pinzolo and once again enjoy the local traditions with visitors to their town. 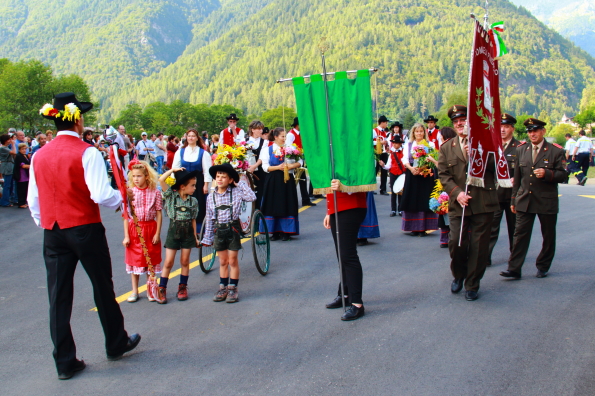