Medieval Verona
I craned my neck and squinted into the sun in order to see the statue of Cangrande I on top of its column. We were in the private cemetery of the della Scala family (whose members were known as the Scaglieri) which contains the tombs of the three most important members of the that ruled Verona for 100 years during the Middle Ages. The impressive tombs or arche of Cangrande I, Mastino II and Cansignorio are considered the most beautiful examples of gothic art in Italy. The design of railings around the cemetery incorporates ladders (scala) which was the symbol of the family as well as the dog (cane in Italian). Dogs are replicated in sculptures on the front of the tomb of Can Grande. This tomb is above the entrance to the small private church of the della Scala family – the church of Santa Maria Antica that was built long before the family used its courtyard as a cemetery. 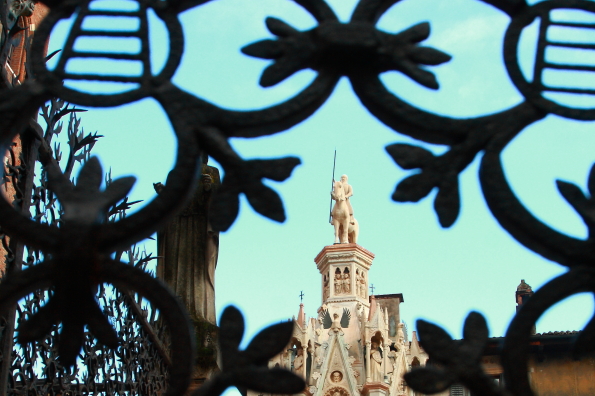 This family rose out of the muddied history that followed the collapse of the Roman Empire. Their reign began in 1259 when Mastino della Scala was elected the captain of the citizens of Verona. When the citizens refused to re-elected him he took the position by force and the Scaglieri ruled the city for a century. Although there were ups and downs during their reign for Verona it was a period of stability and growth. In particular, Cangrande, the most famous head of the family, brought peace and prosperity to Verona. He loved his city and its people loved him. During his rule Dante and Giotto stayed in Verona. His tomb was the first to be built. His equestrian statue, to celebrate his military success, was erected in the small cemetery but has since been replaced by a replica and the original was moved to the museum in Castelvecchio. 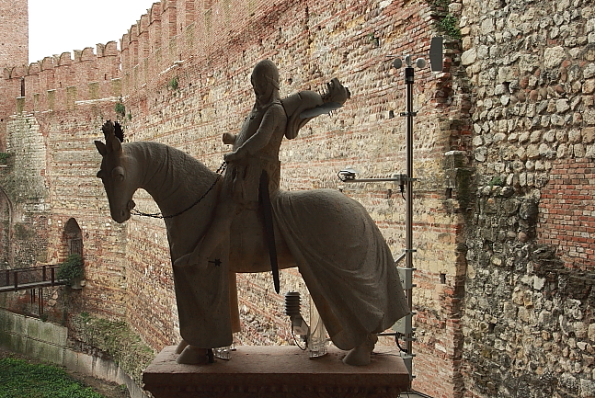 Cangrande I (christened Can Francesco della Scala) ruled Verona between1291 and 1329. He was a successful warrior and took control of several neighbouring cities, in particular Vicenza, Padua and Treviso. He was also the leader of the Ghibelline faction in Northern Italy. Simply put, the Ghibellines and the Guelphs were rival parties in medieval Germany and Italy which supported the Holy Roman emperors and the papal party respectively. In Italy this division developed into serious rivalries between cities and even local families. The Ghibellines were identified by the swallow tailed turrets on their buildings. 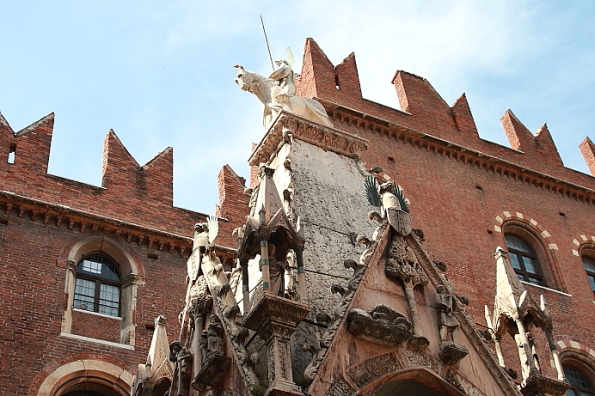 The death of Cangrande I has, for many years, been the subject of conjecture. Did he die of natural causes or was he poisoned by his nephew, Mastino II, who succeeded him? In 2004 his mummified body was exhumed from his tomb in the middle of the night and vast quantities of digitalis were found in his stomach. This did not really resolve the mystery as it could have resulted from the administration of poison or the over-zealous treatment of a stomach ailment by his personal doctor.
Mastino II was one of the most ferocious members of the della Scala family. His equestrian statue portrays him as arrogant and contemptuous. He became the richest and most powerful prince of his generation in Italy and continued his uncle’s policy by conquering Brescia in 1332 and carrying his power beyond the Po. He bought Parma in 1335 and Lucca in 1339 but then a powerful league was formed against him and after three years of war his domain was reduced to Verona and Vicenza.
When he died this unpopular tyrant was succeeded by his son Cangrande II. Nicknamed Can Rabbioso (Raging Dog) he ruled Verona with iron fist, amassing rich treasures for his illegitimate sons and impoverishing the city. This caused internal strife which led the suspicious Cangrande II to surround himself with Brandenburg mercenaries and to build a fortified castle to protect himself from enemies within and outside the city. The Castelvecchio whose reddish bricks and swallow-tailed battlements are typical of Gothic architecture was built between 1354 and 1376. It was divided into two parts, two thirds were occupied by the family’s army and the other third was residential although it is not clear if it was a permanent place of residence for the family or a place of safety during invasions or local uprisings. The castle has a moat (now dry), a drawbridge and a fortified bridge, Ponte Scaligeri (Scaligeri Bridge), at the back that would allow the Scaligeri to escape if the castle was attacked. When the French invaded the area they set up their headquarters there. The castle was restored in the nineteen fifties using modern materials and now houses a museum. This museum was designed by Carlo Scarpa, an Italian architect who was well known for his ability to integrate historic features with modern concepts. 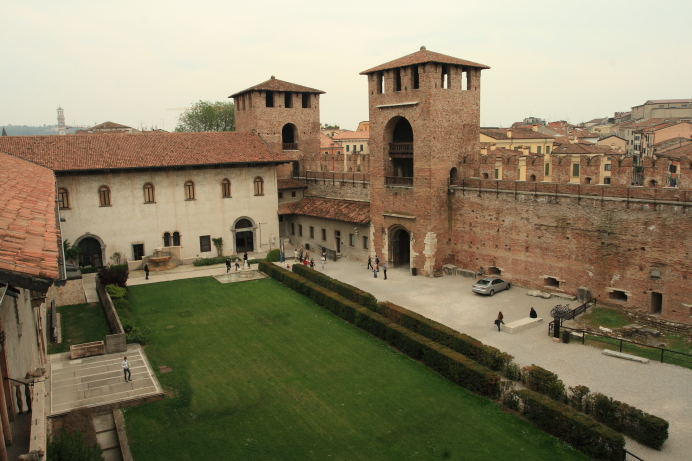 This splendid castle did not protect Cangrande II from assassination by his own brother, Cansignorio, who was the last of the della Scala family to rule Verona. He devoted himself to the embellishment of the city with aqueducts and bridges and the fountain of Madonna Verona which today is a symbol of the city. But by now Verona was in a decline and Cansignorio eventually fled the city in 1387 when it was captured by the Visconti who had rights of succession to the city by virtue of marriage. 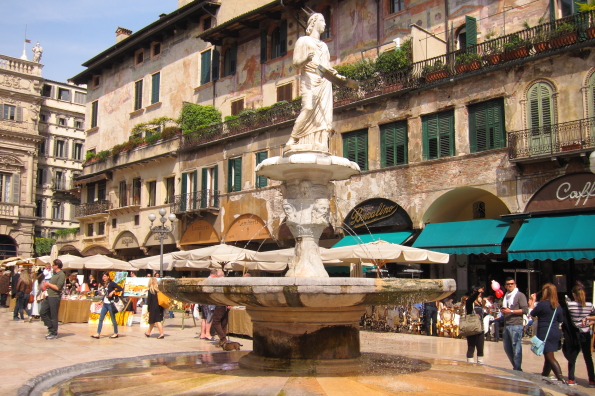 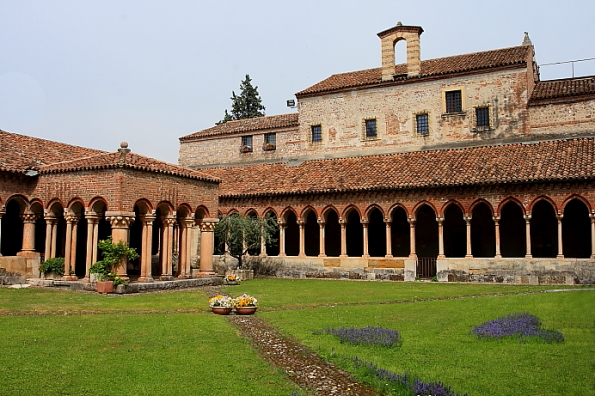 Verona’s most famous attraction also has its roots in this period and the division between the Guelphs and Ghibellines reflected in the rivalry between the Montecchi and Capuleti families was narrated by Shakespeare in his famous play Romeo and Juliet. A house, built during the twelfth century, was owned for a long time by the Dal Cappello family and this began a popular theory that this was the home of Juliet , Shakespeare’s mythical heroine. The current appearance of this building is due to restoration between 1936 and 1940 during which windows, a gothic-style doorway and the famous balcony (on old tomb) were added to the façade overlooking a small courtyard. A bronze statue of Juliet by sculptor Nereo Costantini stands in the courtyard and a superstition has grown up that clutching her now very shiny left breast would ensure luck in love. Shakespeare never visited Verona – he missed a treat. 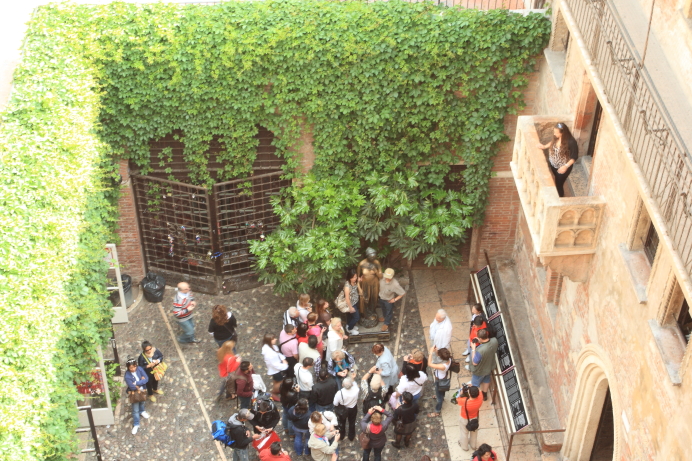