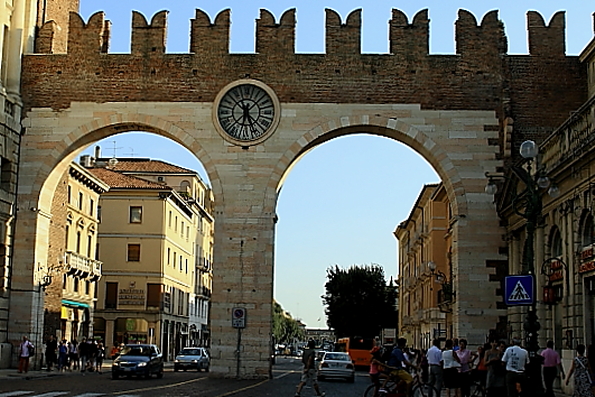 I stepped through the archway Portoni della Bra that leads into Piazza Bra from Corsa Porto Nuova and it felt as though I had gone back in time. A Roman amphitheatre, the Arena, filled my horizon. When it was built by Augustus, two thousand years ago, it was outside the first circle, the Roman circle, of city walls. Now it is inside the modern city. Originally the Arena was surrounded by two walls but the outer wall was destroyed by an earthquake and only a small part of it remains. This section, known as the Ala (wing) is a good example of the original building material – large blocks of lustrous white and pink limestone from nearby Valpolicella. It is the third largest Roman amphitheatre remaining in Italy and the best preserved. 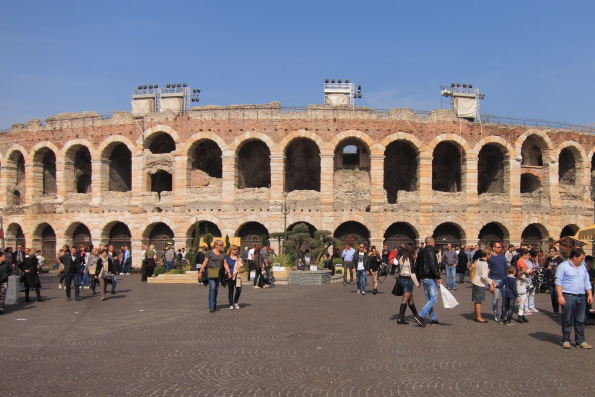 There was no time to linger as I was on my way to find more Roman remains in Verona as I was on my way to find more Roman remains. I crossed Piazza Bra which derives its name from braida which in Veronese means ‘large open space’. This piazza is paved with small granite cobblestones in different colours ranging from shades of grey to blue, red and green tints. When this area was paved in 1782 it was called the Listrone and is the most popular place for an evening stroll. I would be back later to join in but now I left the piazza and followed the famous shopping street Via Mazzini until it emerged in Piazza delle Erbe that was once the Roman Forum. Just beyond this piazza I found the first of the two remaining Roman gates, Porta Leoni. This gate had been incorporated into more modern buildings and its original name was not known but it was christened the Gate of Lions when excavations revealed a tomb decorated with two lions. It also became clear that this was not just a gate but a larger structure that included two towers and barracks for the soldiers. The remains of this structure have been exposed to public view. All that remains of Porta Borsari, which was a similar construction, is the façade that arches over the ingress into the old city. All around the city there are subterranean excavations some of which can be viewed through glass panels and some can be visited. 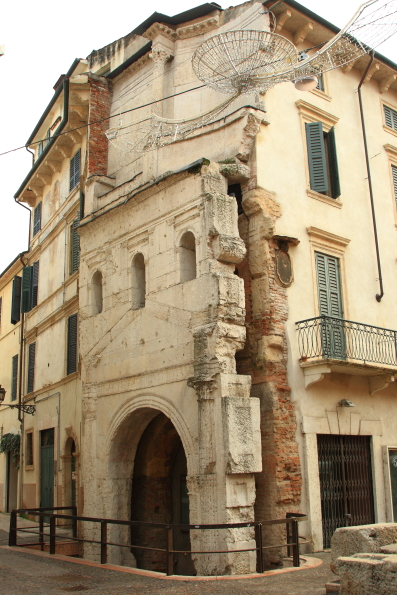 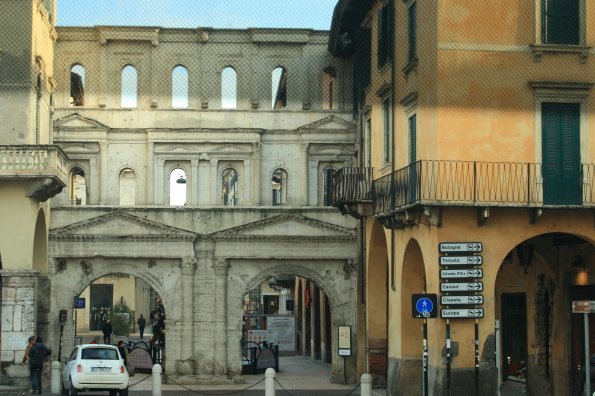 The one remaining Roman bridge, Ponte Pietra is built of stone but the original bridge, built across the River Adige, would have been built of wood. This bridge was built during the construction of the Postumia Road that linked Genoa and Aquileia. Verona was built to control the traffic on this East-West road in Northern Italy. It has been damaged and re-built on more than one occasion but still proudly spans the river. On the far side of the river is the Teatro Romano which is older than the Arena and is still used to stage events such as ballets and concerts. Elevated on the bank of the river it is a delightful venue with views over the city. The theatre is also the site of a very important archeological museum. 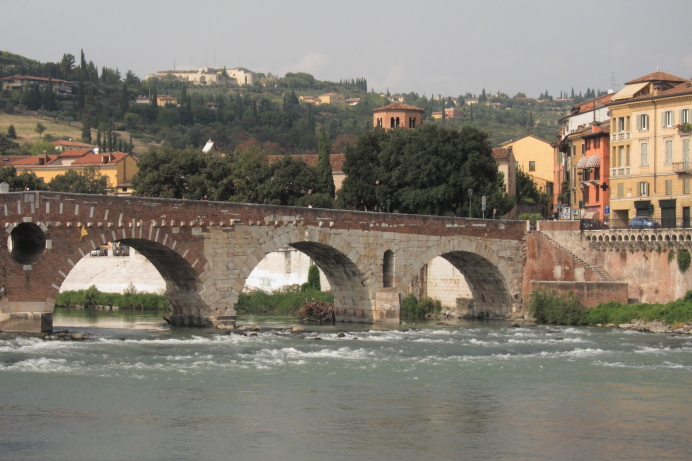 One may wonder why the only remaining Roman arch in Verona, Arco dei Gavi , is now situated beside the road. This rare example of an arch dedicated to a family impeded the advance of French troops when Napoleon invaded the city in 1795 so it was dismantled. The locals collected the stones and in the 1932 the arch was re-constructed on the bank of the Adige, close to the road it once spanned. 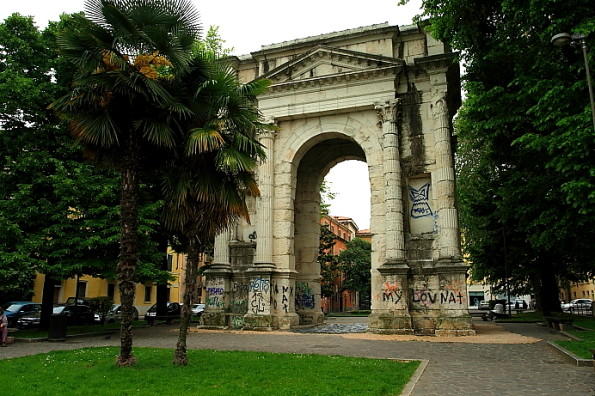 By the time I returned to Piazza Bra it was early evening and crowds were gathering. It was busier than usual because it was the Verona Opera season which takes place every summer so the piazza was also filled with the paraphernalia of the opera and huge floodlights spiked the walls that towered above us. Before joining the queues that were already forming at the four main entrances I decided to have something to drink in Café Brek and I was lucky to find a table outside this popular self-service restaurant where I could watch the stream of people on their way to the Arena. Casual sightseeing clothes had given way to evening finery. And one group amused me by changing amongst the tables before tottering off across the cobbles on their high heels. 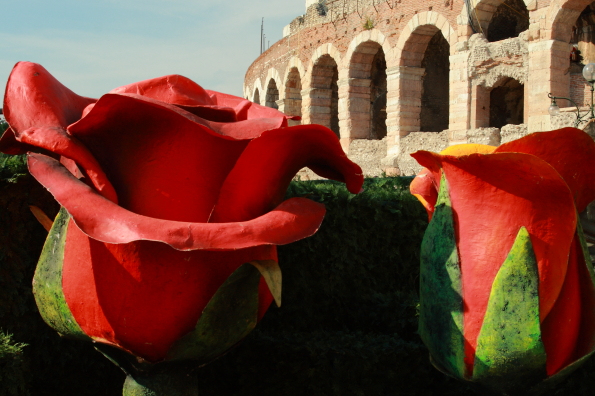 Just before seven when the four gates would open I made my way to the Arena as I had booked a place on the gradinate (steps) and it was customary to go inside early, rent a cushion and then lounge on the steps eating a picnic accompanied by some wine – available from the vendors who regularly patrolled the terraces. As the performance would not start before nine there was plenty of time to soak up the atmosphere of this unique venue. As I sat there watching the auditorium fill up it seemed incredible that the Arena once held thirty thousand spectators from all over the surrounding territory which was three time the size of the resident population. They had flocked to Verona to watch gladiators fighting each other or wild animals including lions, bulls and geese. This massive arena was also used during medieval times for bull fights, jousting and mock battles. In 1913 a famous local tenor, Giovanni Zenatello, sang an aria there to demonstrate its amazing acoustics and subsequently the opera Aida was performed to celebrate the centenary of the birth of Verdi. This first production was a real challenge due to the size of the venue but it was met by the use of huge three-dimensional sets designed by the architect Ettore Fagioli. This first performance was so successful that it was repeated the following year and soon became an annual event quickly becoming an international institution that has featured many world famous singers. Aida is always featured and I have seen two productions – a modern one that featured a pool constructed on stage with boats rowing across it and one that replicated the staging of the original production. 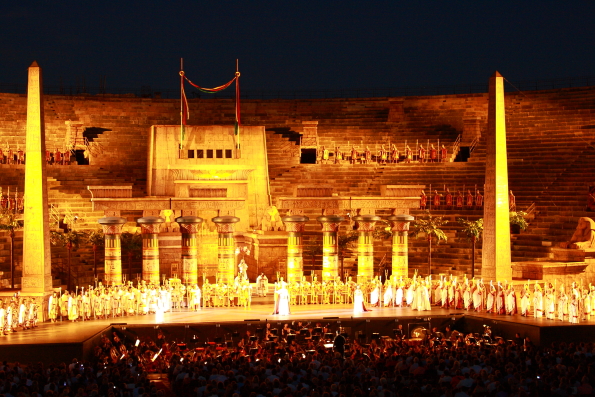 One quarter of the Arena is dedicated to the stage and the orchestra pit the Arena which reduces the size of the audience to 16,000. This means that operas such as Nabucco by the Italian composer Giuseppe Verdi which require a big setting and large cast can be seen at their best here. This opera tells the story of Nebuchadnezzar, the king of Babylon and his struggle against the Jews. It was first performed in Milan in 1842 before Italy was united and Milan was part of the Austrian Empire and features the famous lament Va’ pensiero sung by the captive Jews on the banks of the Euphrates as they remember their homeland. At that time encores were expressly forbidden but it is reported that as the last notes died away the audience stood up for an extended ovation, and defiantly demanded an immediate encore. No doubt the Italians felt a bond with the exiled Jews as it was the time of the Risorgimento (the rising again) and the Italians were determined to unite themselves as one country.
Va’ pensiero became a kind of national anthem and the Italian resistance forces used Verdi’s name as the rallying cry for both independence and for the reinstatement of their king – ‘Viva V.E.R.D.I.!’ The acronym stands for ‘Victor Emanuele Ré d’Italia’ (Victor Emanuel, King of Italy). Verdi’s dying wish, to prevent conflict over the honour of performing at his funeral, was that no music should be played. But on the day he was buried five thousand people gathered in the rain, and spontaneously sang Va’ pensiero as song now closely identified with both Verdi and his beloved country. Nabucco was the first opera I saw in the arena and it was the first I had heard this song. When it was encored it was wonderful to hear this haunting music for a second time. The whole experience was enthralling. When we entered the Arena we had each collected a small candle and we were instructed to light them just before the auditorium was plunged into darkness. This tradition had begun over eighty years ago when the audience had lit their own candles to read their programmes. Giuseppe Vincenzi of Vincenzi pastries in Verona had revived this custom and provides the candles. It was magical watching pricks of light dancing around the arena.
It was after midnight when the opera finished and I was swept out of the Arena by a sea of people all anxious to find buses and taxis to get back to their homes and hotels. Some lingered in Piazza Bra to have a last drink and savour the atmosphere. I was one of these – I did not want the evening to end. The soft lights and gentle buzz of conversation reminded me of a previous visit, at Christmas, when the piazza had been lit by festive lights and a shooting star erupted from inside the amphitheatre and landed in the piazza. This amazing monument built by the Romans has truly been integrated into our modern culture. 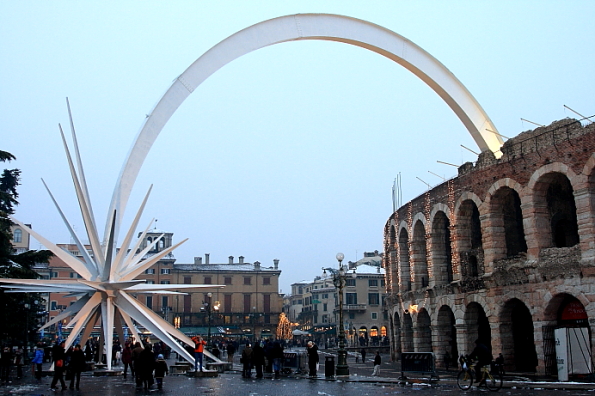