A Day on Lake Garda

A cool breeze wafted through my hair as I relaxed in my seat in the shade and watched the shore and the pastel coloured buildings of Riva del Garda recede into the distance. The only disturbance of my peace was the blaring of the ferry’s horn sounding a warning to any windsurfers who threatened to cross our bows. We were approaching Torbole renowned as a haven for sailors and windsurfers and the latter were flirting outrageously with the wake of our vessel. We were lucky to be cruising Riva del Garda and Malesine on the paddle steamer – a lovely old boat that has been used as a ferry on Lake Garda for more than one hundred years. This elegant reminder of days gone by and had strategically placed glass panels on board allowing passengers to watch the wheels churning. During our journey we would be criss-crossing the northern end of Lake Garda where the Dolomite Mountains plunged spectacularly into the icy blue water. 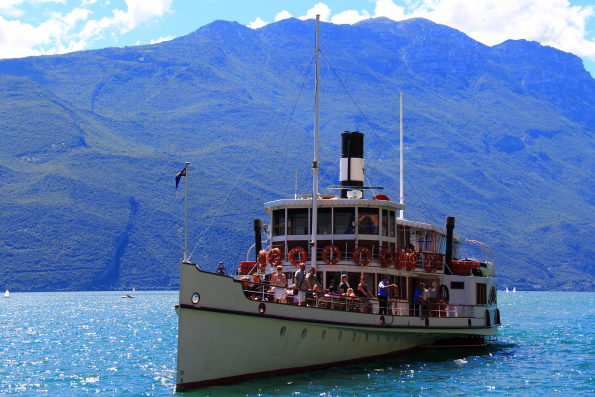 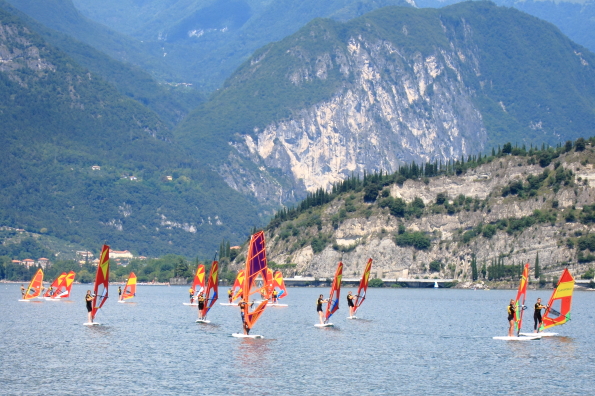 I was spending a week in the Dolomites with a group organised by “Solos Holidays and one of the optional excursions on offer was an excursion to Lake Garda. This was always a treat for me as I enjoyed every aspect of this day out. As we journeyed down the mountain a sparse agricultural land dotted with small patches of maize standing to attention evolved into a Mediterranean-type panorama on as we entered the Valley of the Lakes. Oleander bushes and olive trees lined our way and beyond them field upon field of vines interspersed with patches of Kiwi fruits stretched as far as we could see. As the Bastione, a round Venetian fortress, perched above Riva came into view I knew we were almost at our first destination, Riva del Garda. 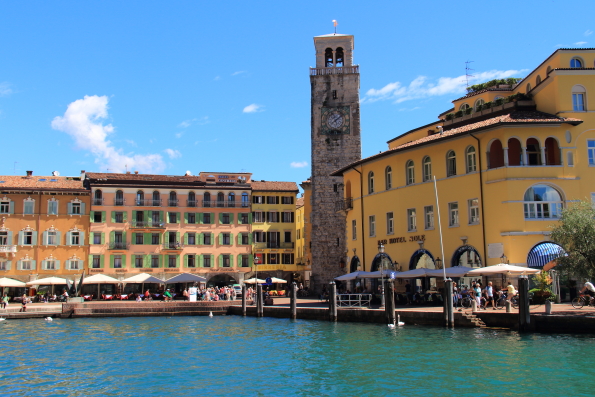 My companions were anxious to being their exploration of this this pretty, sophisticated resort stretching round the shore in front of them so I pointed out a few landmarks and suggested they would find the climb to the top of the Apponale Tower well worthwhile for the view but to remember the large bell at the top still chimed on the hour. Further round the lake is the fortress, the Rocca of Riva, built on a small island by the inhabitants in 1124 to defend their city. Accessed across a drawbridge this fort has been altered and enlarged over the years and now provides a splendid venue for exhibitions and events. I was happy to take a gentle stroll along the waterfront where I knew I would be rewarded by the sight of many welcoming tables and chairs shaded by sun umbrellas and the opportunity to idle away some time over a welcome cappuccino. I was happy to watch more active visitors peddling furiously across the water on coloured pedaloes or cycling past me on their way to join one of the well-constructed cycle paths nearby. 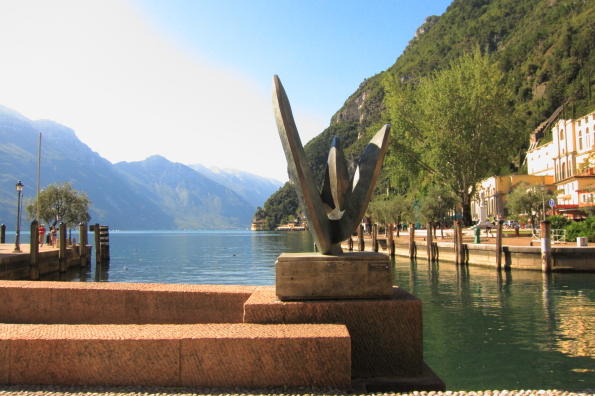 All too soon it was time to board our ferry and as we bobbed on the water waiting to depart we had a good view of the impressive Hydroelectric Power Station Ponale which was opened in 1926 by the famous Italian poet Gabriele D’Annunzio. Designed by local architect Giancarlo this was the first project to exploit the Ledro-Garda waters using the 500-metre drop between the two lakes in adjoining valleys. We chugged across the vast expanse of water towards Torbole our first port of call and a haven for sailors and wind surfers. We then set off across the lake on the longest section of our journey to Limone where the majority of the passengers disembarked to visit the local market. These local markets are very popular but we had decided to continue to the quieter town of Malcesine to enjoy a leisurely lunch. We approached under the watchful windows of the Castle Scaligero, built from the stone malus silex from which Malcesine derives its name. Lunch was our priority we could ascend the narrow cobbled streets later to visit the castle. Leaving the milling crowds around the small passenger port we plunged down the shaded back alleys and after a few twists and turns we arrived in a small courtyard bounded on one side by the lake. A smiling waiter emerged from the interior of the restaurant La Pace and greeted my group. He led us to some small tables in the shade of a large canopy facing the water. I ordered my favourite dish, spaghetti alle vongole (spaghetti with clams) accompanied by a small jug of the excellent house wine and there I stayed until it was time to move on. 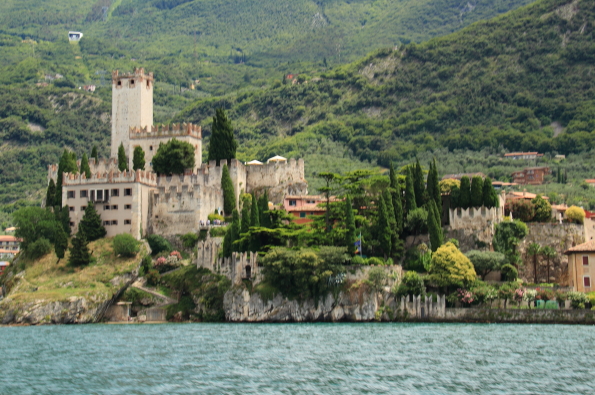 Some livelier members of the party had taken an earlier ferry to Malcesine to ascend to the top Monte Baldo in the large revolving cable cars. They joined us in time to board the ferry to Limone flushed with the success of having achieved their objective plus a walk down from the mid-station. I was relieved to see it was one of the regular passenger ferries for our crossing to Limone. The large vehicle ferries are also used on this route and the sun deck equipped with sunbeds has, in the past, proved a fatal attraction to some of my guests who have stretched out and fallen asleep ending up in Riva del Garda. Limone, once famous for its cultivation of citrus fruits during the fifteenth century is not thought to be named after the most popular of those fruits, the lemon. Nor after the world famous Limonaia or lemon groves that were constructed during this period. Remains of the distinctive high stone walls that protected the trees from the cold winds and the huge columns in the groves supported the wooden rafters of a cover that was used in winter to create a greenhouse effect can still be seen on the shores by this town. It was a struggle to grow these fruits as earth had to be imported from the southern part of the lake to supplement the impoverished soil in the area and an irrigation system had to be devised to water the trees. These groves were abandoned when new techniques for growing these fruits were devised in areas closer to the main ports. 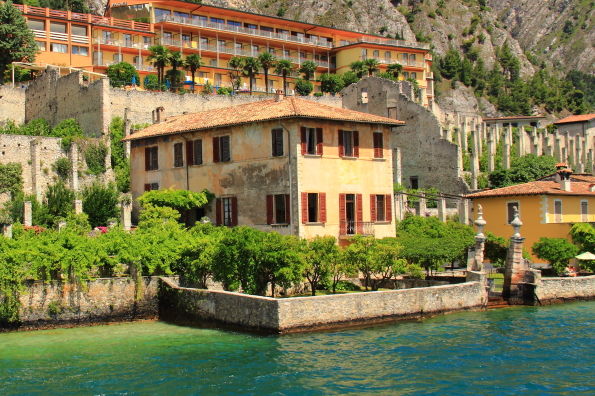 It is thought that the name Limone derives from the Latin word limes meaning border as the village was once on the Italian-Austrian border resulting in mixed fortunes for its inhabitants. While it was part of the Hapsburg Empire during the nineteenth century it was producing an impressive list of products such as magnesia, paper, quicklime and silkworms. But during the First World War, as it was right in the middle of the combat zone it was completely evacuated and when the inhabitants returned after the war nothing remained of their former prosperity so they began again as fishermen and olive growers. They were hampered by their isolated position as the village was accessible only by water or over difficult mountain paths. It was not until 1932 that Limone was connected directly with other towns on the lake following the construction of the renowned Western Gardesena Road which is still used today. This new road brought tourists to the area and this poor fishing village was transformed into one of the most prosperous centres on the lake. Olives are still grown there and, pressed cold inside a stone mill, these well-nurtured, hand-picked fruits produced a pure, high quality oil, delicious when dribbled over a piece of fresh white bread. Personally I prefer to indulge in an ice cream while strolling along the lakeside towards the coach park where our bus will be picking us up. 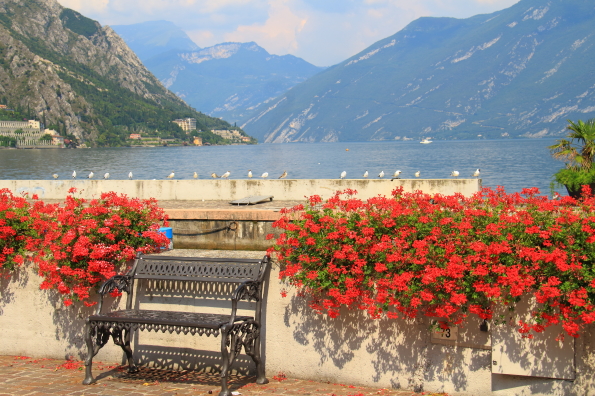 As we drove along the road beside the lake I had one last view of the lake speckled with the small white sails of numerous yachts taking advantage of the wind that blows every day. I knew I would snooze most of the way back not because I had been particularly active just because I was content. I never tired of my day out on Lake Garda.