An early morning mist hung over Lake Yaxhá as our ancient but comfortable bus ground its way along the bumpy road swerving occasionally to avoid the small herds of pigs foraging in the verges. Some of my companions requested a photo stop – for a pig? Ever willing to oblige Roel, our local guide told our driver, Manuel to pull over.
As cameras clicked and flashed Roel, who looked ten years younger than his twenty-five years, told us that in Guatemala pigs, ponies and donkeys were allowed to roam free during the day but they returned to their homes overnight. As we plied him with questions about life in the local villages he pointed out some young girls carrying painted pots on their shoulders, full skirts swinging jauntily as they hurried along. They were on their way home after collecting water from the blue water barrels strategically placed on the main roads. These were re-filled regularly but if the supply ran out then the villagers had to raise enough money to pay the driver and his assistant to do an extra run. 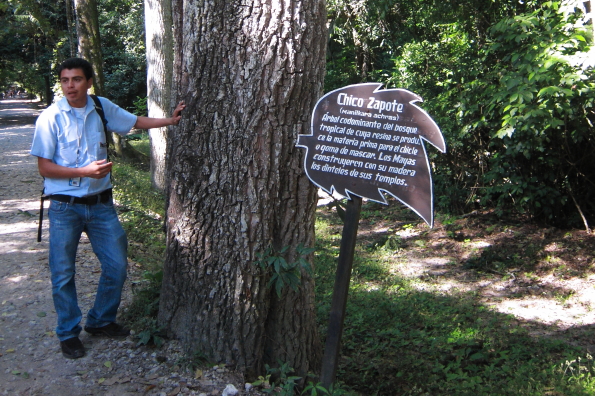 We were fascinated and, his face alight with enthusiasm, Roel reminisced that when he was a boy he had to make two trips to the local river to collect water before he could go to school. He remembered his grandfather, of Mayan descent, carrying huge weights supported by a band across his forehead. Sacks that weighed two or three times more than his slight frame. His parents wanted more for their son and were anxious that he should get a good education. Every day he had to walk for over an hour to get to school and during the rainy season, when he had to wear large, clumsy gumboots he was teased by the other children. But he persisted and as he grew older he either stayed in the village where his school was situated or he commuted on the back of his friend’s motorbike.
His recollections were interrupted by our arrival at the archaeological site of the Mayan city of Yaxhá. Spellbound we followed Roel around as he re-created the history of his ancestors through drawings in the dust and vivid explanations of the tumbled, moss encrusted stones around us. He explained the intricacies of the Mayan calendar and the significance of 21 December 2012 when the new era began. As we clambered up to the top of the highest temples he pointed out birds of prey and colourful toucans in the foliage that surrounded us. We loved the combination of ancient and natural history. 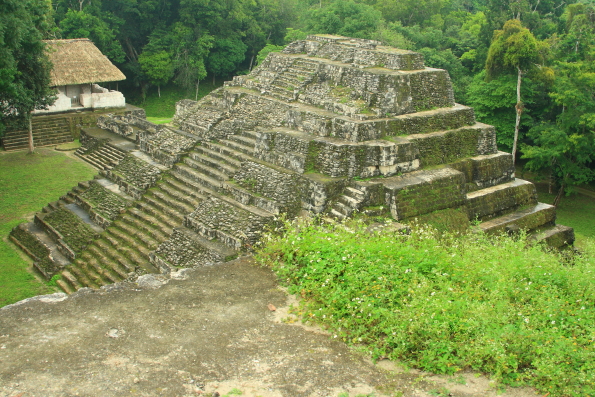 Next stop Topoxté and more information about the local fauna as we chugged across the lake to this site. It was here, amongst the Mayan ruins, that Roel succeeded in his quest to find a tarantula and ran about enthusiastically taking photographs of us as we minced around with the hairy creature balanced on hands and hats. It was fun learning about his country so dear to his heart. 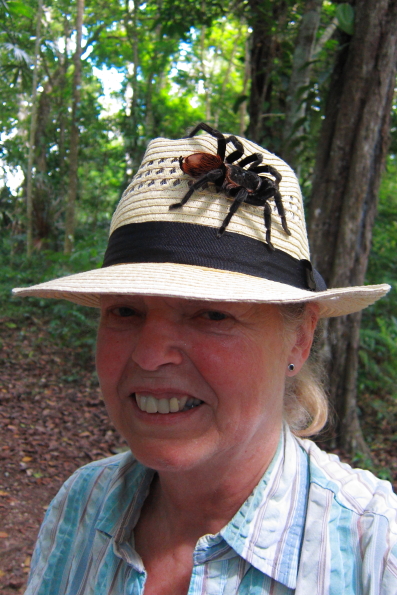 On our journey back to the hotel Roel’s enthusiasm was undiminished and his boyish face under his close cropped black hair beamed with pleasure as we plied him with questions about his own history. His slight figure encased in jeans and T-shirt moved easily up and down the narrow aisle of our bus as he chatted with individual members of the group. For us he had become the very essence of the country he lived in. After school he had studied to become a guide. He was married and had one son who often played with the little girl next door. She was the same age but much smaller so she often ate with them enjoying more nutritional food than the three meals of beans that she generally consumed each day.
We spent the next day we at the Tikal National Park and after exploring the magnificent ruins we had lunch in the Ristorante El Meson. During our tour I had been trying the ubiquitous chicken soup which often constituted a whole meal comprising cooked chicken with vegetables and a bowl of soup on the side. At this restaurant where the lack of electricity meant they had to cook on open fires I had the best chicken soup – comprising slightly curried chicken with rice and vegetables. After lunch Jael encouraged us to go zip wiring. He waved at us as we flew over him and rescued us when we got stranded between the last two of the seven platforms. 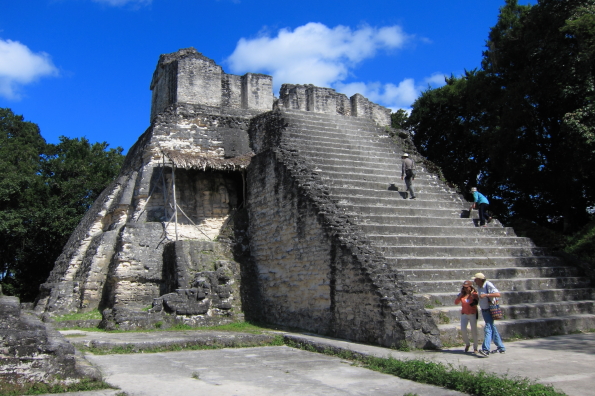 Meeting Roel was one of many highlights of our trip to Guatemala which had started in Antigua where we stayed at the Camino Real Antigua Hotel where all the ground floor rooms have been built around small courtyards reflecting the colonial style for which the town is famous. We started our city tour at the church of San Francesco Grande resplendent against a background of the volcano Fuego that was spurting steam following a recent eruption. Many of the churches are a mixture of Catholic and Mayan icons. Although the Spanish forced the Mayans to become Catholic there is evidence of the widespread resistance. Our tour included a visit to a traditional house. La Casa de Los Leones, still in its original state and a stroll around the impressive Central Plaza. 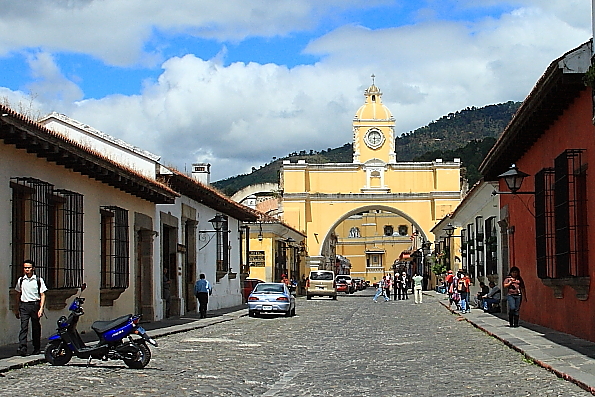 We moved on to Lake Atitlán via Chichicastenango where the local open-air market attracts hundreds of Indians bartering for goods and selling produce. We had to push our way through the crowds to the steps of the 400-year old church of Santo Tomás. Bundles of fresh flowers hindered our progress to the church and smoke from burning incense filled our nostrils. A small fire at the top of the steps signified fire, one of the four elements that the Mayans worship. Inside the church we found a bizarre mix of Mayan rituals (candles burning on small raised platforms) and Catholicism. It is the only church in Guatemala where both religions are actively practised. Inside a statue of the Mayan hero, Santiago, mounted on a horse surveys the shabby, smoke damaged Catholic ornamentation. 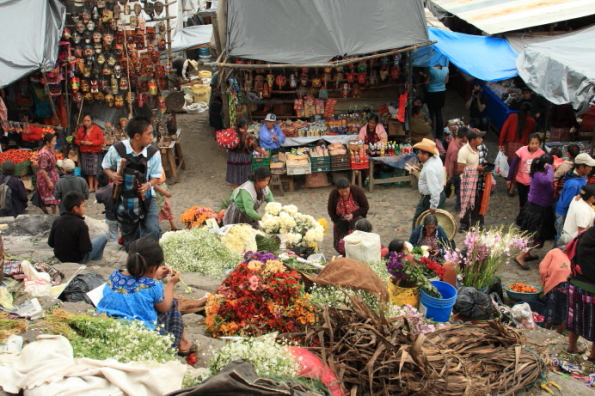 Our hotel on Lake Atitlán, the Hotel Atitlán was set in beautiful grounds on the lakeside and we boarded our boat from its private jetty to visit one of the twelve Indian villages built around this lake. As soon as we disembarked in Santiago Atitlán we were surrounded by locals trying to sell us Christmas intricate Christmas decorations made with tiny beads and we watched a lady in traditional dress wrap her headdress twenty times around her head to reflect the number of days in the Mayan month. Fleets of three wheelers ferried visitors from the shore to the town centre but we chose to walk and explore the network of cobbled streets. This tourist trap was a big contrast to our genuine experience visiting “San Francisco El 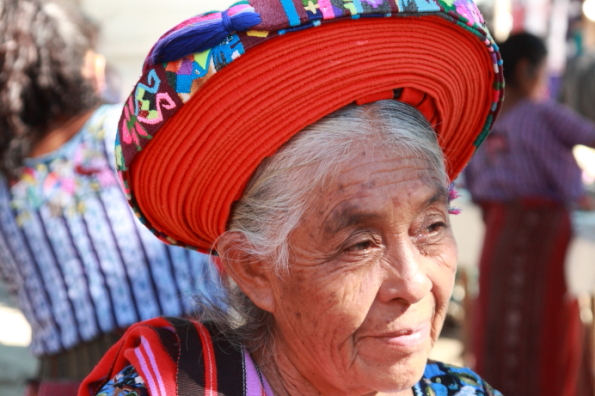 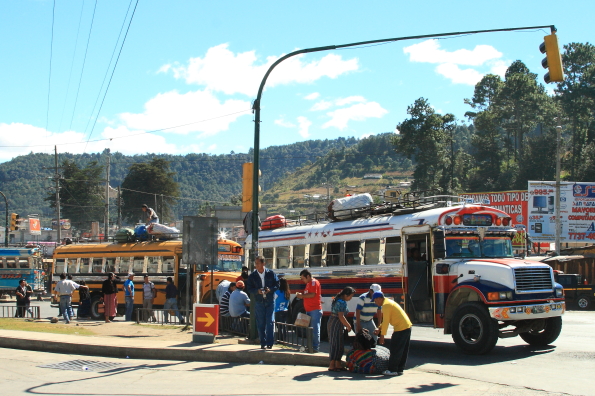 That day we had driven along the Pan American highway and had stopped at a service station at a large junction where the colourful chicken buses picked up their passengers. These chicken buses are rented so the drivers and their helpers keep the balance after paying the rent. They fill the buses with people and pile luggage, including livestock on the top – sometimes doing it on the move as they are desperate to stay ahead of other buses on the same route. There is no speed limit in Guatemala so they drive as fast as they can. It was delightful pandemonium as was the animal market when we arrived at our destination. It takes place in the open and people sit on the ground surrounded by the animals they were selling – hens, turkeys, chicks, ducklings, pigs, sheep, goats, puppies, kittens, cows and hybrids of some of these species. Mingled amongst these were the occasional shoe stalls, clothes stalls and household goods stalls. 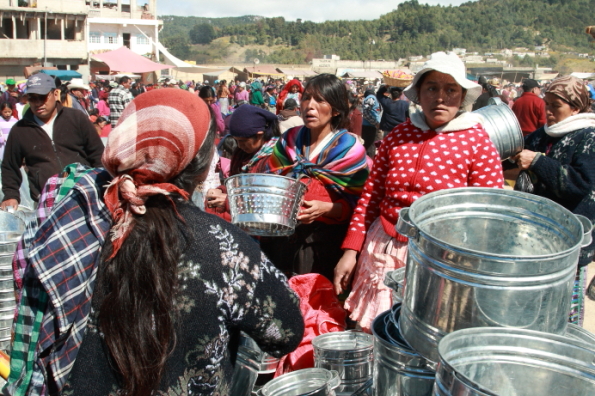 Almolonga, our next destination, is famous for the vegetables and fruits cultivated on smallholdings and also for a religious revival reflected in the abundance of churches. We strolled through the vegetable market exclaiming at huge, orange carrots, bright red radishes the size of an apple, dazzling white onions and a wide variety of luscious fruits. Next we visited the plucky Quetzaltenango, the second biggest city in Guatemala and one that has fought, unsuccessfully three times, for its independence from Guatemala. San Andrés Xecul which has an important sixteenth century temple with a fabulous bright yellow façade was our final destination. During our travels we saw lots of contraband petrol guarded by young men with home-made filters to use to fill the vehicles up – some within a few metres of the local police. 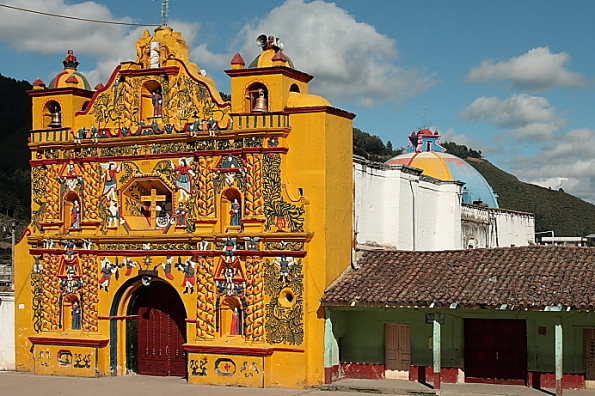 Biotopo del Quetzel, a natural reserve, is a good example of a managed system with more than fifty different tree species that reach up to 120 feet high including some specimens that are more than 450 years old. We wandered along a well-constructed path hoping we might catch sight of the famous quetzal but had to be content with the stuffed version in the little museum. We moved on through Lanquín admiring the different costumes of the region – there are twenty-two different ethnic groups of Mayans and a corresponding number of different languages and costumes. The cost of these costumes however has resulted to widespread use of Western dress gleaned from jumbled piles spread on the local market stalls. We passed cardamom plantations and learnt that Guatemala is the most important exporter of cardamom in the world. 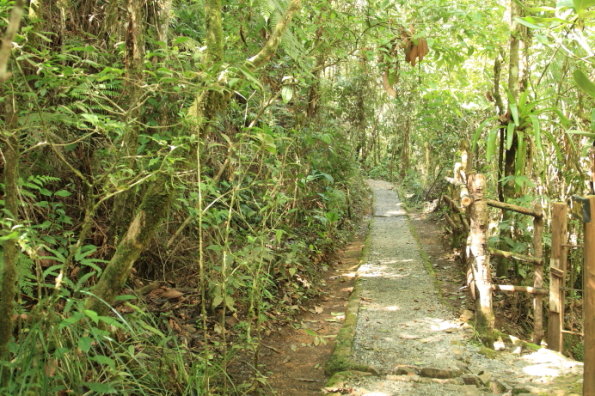 We took the local transport, the back of a small truck from Lanquin, the nearest town, to Semuc Champey on the Cahabón River. We bounced along for nine kilometres to the amusement of a mother and her daughter accompanied by a large sack of water melons until we reached the pools formed by a natural land bridge 500 metres long where the river runs under a mass of rock also known as a siguán. We had two local passengers, a mother and a daughter accompanied by a large sack of water melons. It was worth the discomfort to spend time pottering in the large rock pools enjoying some unusual scenery. 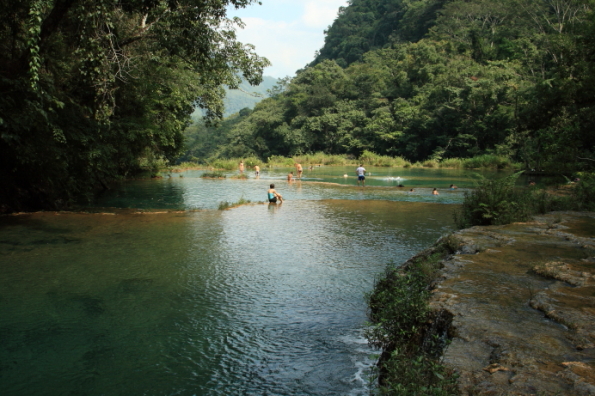 Yes, I had many happy memories of Guatemala but in particular Roel who brought his country and his culture alive for us.