Celebrations on the Italian Riviera

Not even I am immune to the buzz of excitement that ripples through a crowd when a famous personage is around. A metallic Aston Martin Vanquish parked outside the casino was attracting a lot of interest and keeping the doorman on his toes as he screamed at people not to touch the car as they surged around it having their photos taken. At regular intervals he raced out with a paper towel to remove smears and smudges. He refused to divulge the name of the owner and then grinned and said “James Bond”. Only in Monte Carlo which celebrates the rich and famous. 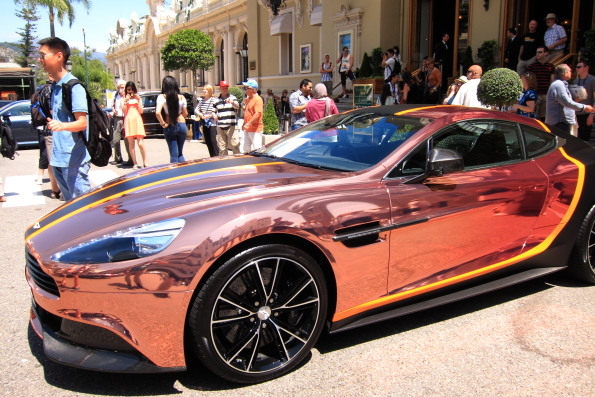 A few minutes later an old black Mustang rolled by in tandem with a cameraman on a motorbike. Clearly the silver haired gentleman in the back seat was famous but I had no idea who he was until the whispers reached me “did you see Jean Paul Belmondo?” I could hardly miss him as he nearly drove over my toes. But I was caught up in the fervour and informed my colleagues when they arrived that I had just seen him although I had no idea who he was.
We had started the day in Monaco where we watched the changing of the guard at the Palace, explored the Palace itself, visited the Cathedral and then spent some time in the famous Jacques Cousteau Institute. The special exhibition this year celebrates the shark. Large members of this species cruise round the spacious tank in the aquarium. Smaller species are displayed in a shallow pool where visitors can touch them. The yellow submarine outside the building has been temporarily replaced by a metal shark to mark the occasion. 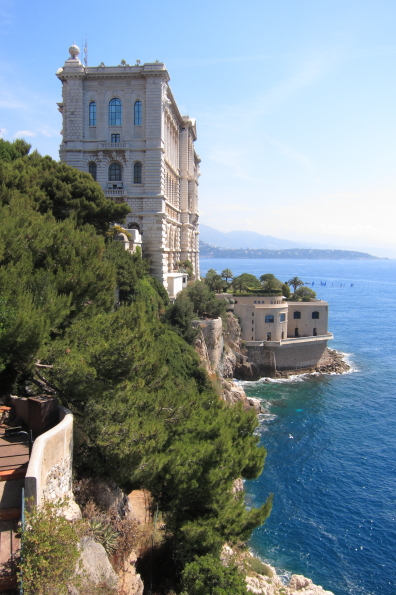 A few days later, in Cannes, I saw the hand print of Mr Belmondo on the pavement as we strolled along the Croissette where a week earlier the International Film Festival had taken place. By then I was an expert on this gentleman thanks to the internet. A red carpet still graced the steps outside the Palais des Festivals et des Congrès and was crowded with people who had paused to have their photos taken there. I was still digesting the statistics we had just been fed – around 5,500 films are now shown during the week of the festival in venues all over the town including hotels and beaches. This amazing celebration of the film industry takes place in Cannes as an indirect result of the rise of the fascist regimes in Europe during the 1930 and it eventually replaced the original venue, Venice. 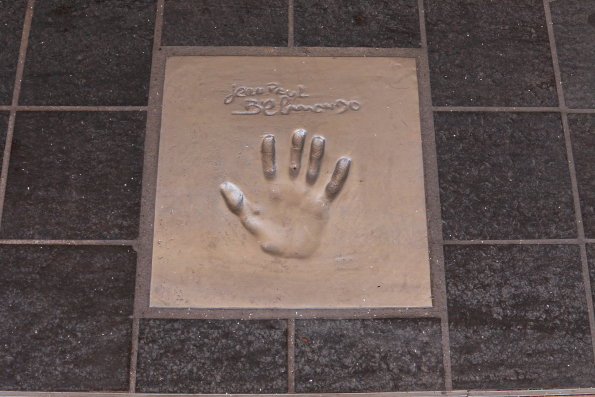 That same week we visited Nice entering the town down the long Promenade des Anglais and then walking through the old town to the Market where local workers and visitors sat outside the many restaurants enjoying some lunch. Just a few months before our excursion here the town had celebrated the opening of the Promenade de Paillon. This huge green public park stretches for over one kilometre from the Albert 1st Gardens with its lush Mediterranean vegetation and the huge “Arc de Venet” sculpture. Through the Place Massena and the sculpture The Conversation perched on poles above the black and white paved area and into the newly constructed Mirror of Water. This area was originally called the Coulée Verte (green axis) but has been re-named the Promenade du Paillon in reference to the River Paillon that still runs beneath it. 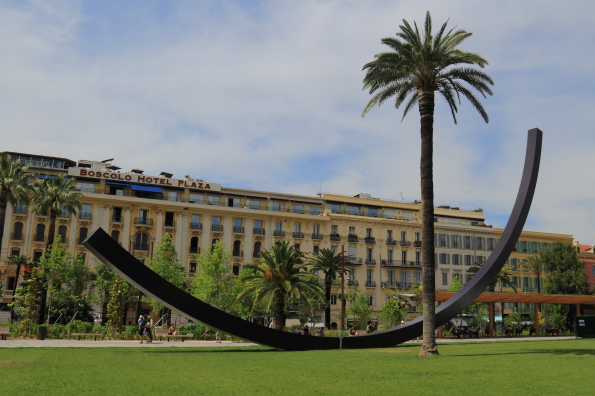 In order to extend the existing parkland area the former bus station and a large public car park were demolished that not only cleared the space but opened up wonderful views of the heights of Nice and the facades of the old town. A pedestrian walkway threads its way past strips of lawn dotted with water mirrors and children’s play areas to the National Theatre in the modern town centre. Several water features include the “mirror of water” an area that is covered with water that is only two centimetres deep which pedestrians can walk across when the water jets are not in use. This basin can also be converted into a plateau of mist made by air pumps blowing tiny drops of water into the atmosphere. 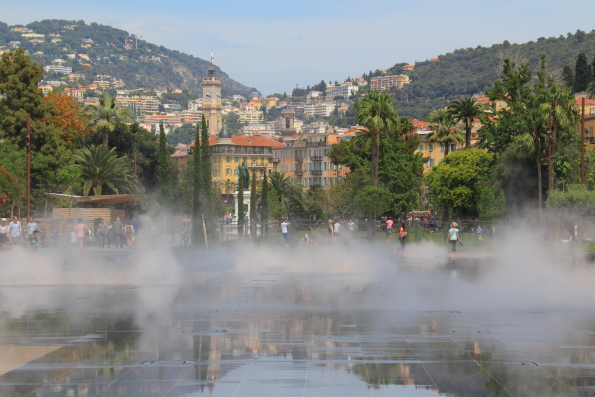 These water features are a celebration of the river that runs below them, a river that was buried in the nineteenth century to clean up the city. The Paillon was just a wide river bed that was rarely more than a few small streams running down to the sea and a useful place for doing laundry and then spreading it out to dry – not a pretty site for the tourists. Occasionally heavy rainfall in the hills above Nice would result in a sudden torrent flooding the whole area. Such deluges did not occur very often but the risk was so great that mounted watchmen were patrolled the banks so they could warn people on the river bed that “the Paillon is coming”. Now there an electronic monitoring system and a system of underground overflow tunnels to deal with any surges while visitors enjoy the promenade and its attractions.
Although we spent a lot of time in France we were actually based in the Italian town of Sanremo on the Italian Riviera and also spent some time exploring the locality. Our visit to the San Siro Cathedral coincided with a school choir rehearsal. We had to leave when the participants in a mass for local schools started pouring into the cathedral but the memory of the haunting music stayed with us as we made our way through the narrow cobbled streets of La Pigna, the medieval settlement above the town. Here we had a glimpse of life hundreds of years ago as we explored the winding streets designed to confuse marauding Saracen pirates. Local people are moving back into the area attracted by the peace of the car free streets and the cool of the sturdy buildings. 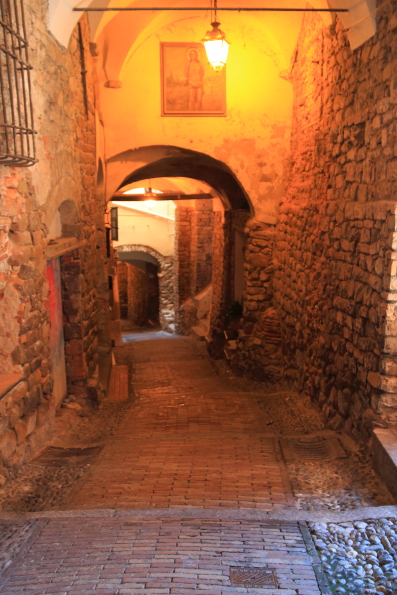 Another day while some worshipped the sun on the sandy private beaches the rest of us walked along a section of the cycle track, the Ponente Ligure, which skirts the coastal area of the town. The rush of tourists to the Italian Riviera during the nineteenth century had resulted in the construction of a railway line along the shore marring its natural beauty. When the line between San Lorenzo al mare and Ospedaletti was relocated inland the railway line was re-developed as a cycle and pedestrian path along the coast. This track has become very popular and tourists can hire bikes to explore the twenty kilometre route. We strolled along this path around the two ports, Porto Vecchio and Portosole, to the Villa Nobel. 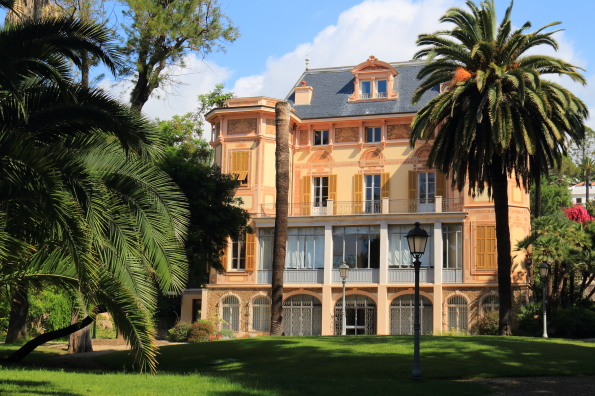 Alfred Nobel spent the last five years of his life living in this villa. He built a laboratory there so that he could continue his experiments with dynamite that had led to his expulsion from Paris. This Swedish scientist not only invented dynamite but was also the holder of 355 patents for a stunning variety of inventions. He left a fortune in his will to fund the Nobel Prize honouring men and women from all corners of the globe for outstanding achievements in physics, chemistry, medicine, literature, and for work in peace – a list that reflected his own varied interests. After his death Villa Nobel was sold in accordance with his wishes but later it was bought by the local authority and a public museum has been created in the villa that celebrates the life of Alfred Nobel. Further ties with Sanremo are maintained by the provision of large quantities of flowers – the town is famous for the production of flowers – that adorn the annual Nobel Prize Award Ceremony and Banquet in Stockholm. 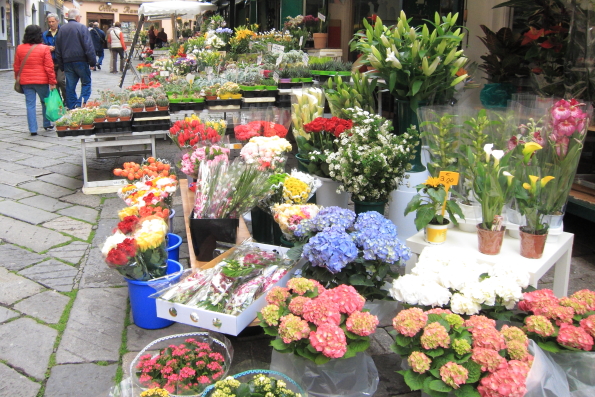 This tour was organised by Solos Holidays Ltd and based in the Lolli Palace Hotel that occupies a beautiful Art Deco building on the sea front very close to some of the lovely beaches strung along the coast. While I was there I celebrated eighteen years working for the company as a tour leader – a good excuse to indulge in the young, slightly fizzy local white wine, Bianco Rustico. 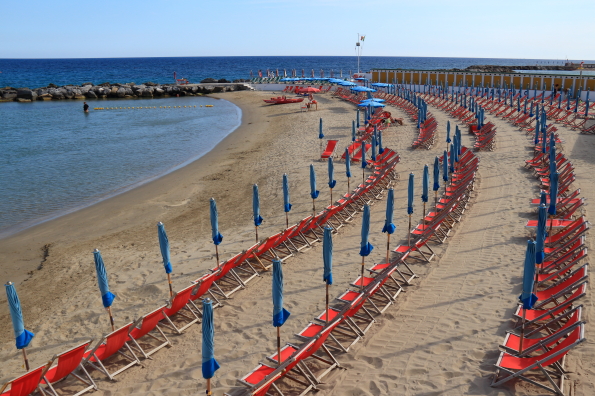