Muddy brown water swirled around my feet and threatened to lap over my shoes. I could feel myself sinking and screamed for help. My companions were confidently striding ahead while I floundered behind them. Our guide, Triin, hearing my cries of distress turned back and reached out to pull me from the mire while chiding me for taking a short cut. 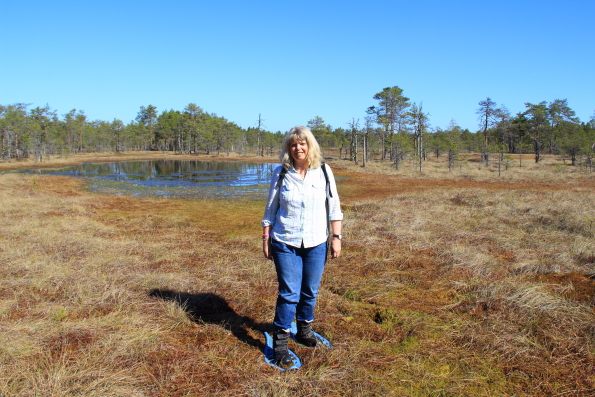 This was my first experience of bog walking and already I had forgotten our instructions to take small steps and stay behind the guide. Our antics as we got used to walking on sinking ground with plastic, racket-shaped bog shoes strapped to our feet were observed by those members of our group who had decided to explore the bog from the safety of the board walk that winds it way through the bog to a viewing tower in the centre. Our walk through the forest and marsh landscape was punctuated by information about the flora and also some interesting local remedies. Vodka socks had us all intrigued. This is a cure for a fever and involves soaking a pair of socks in boiling vodka and then wearing them overnight under a layer of plastic and a second pair of socks. 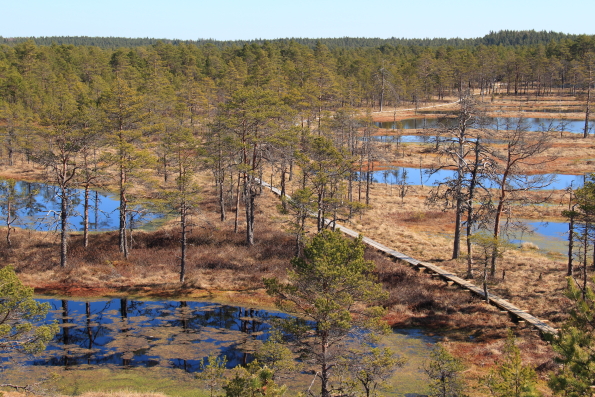 Back on dry, firm ground we had a very unusual but tasty lunch that had been prepared for us on a bonfire by Oliver Tohva at the outdoor restaurant Maisemaa. We had herb potatoes Moose meatballs containing specks of feta cheese accompanied by a salad and the traditional black bread. The latter is a favourite throughout Estonia and more than sixty varieties are sold in bakeries and eaten fresh every day. Our dessert was a rustic apple crumble covered with warm caramel and our meal was accompanied by a hot apple drink which we drank out of a wooden cup. 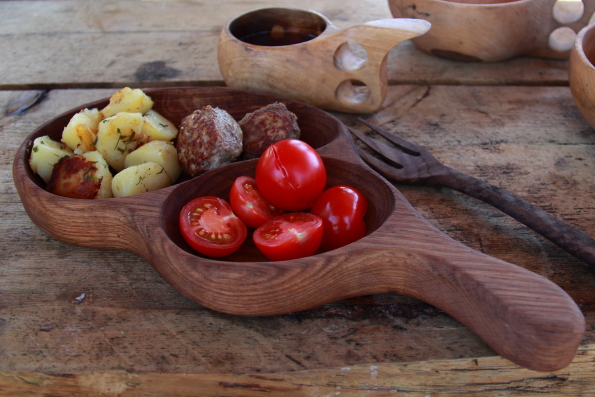 This was my second unusual meal since I had arrived in Estonia the previous day. We had eaten our first dinner at the house restaurant MerMer situated in the old fishing village of Kolga-Aabla on the Juminda peninsula overlooking the Baltic Sea and accessible from Tallinn by boat. Our delicious meal cooked by our hosts Jaan and Merritt included fish fresh from the sea that day and local fresh vegetables. We did not meet our third host, Hummer their American bulldog who has written a recipe book and has his own blog but has not yet learnt to write in English. After eating we made our way to our hotel the Vihula Manor Country Club & SPA a charming 16th century estate with two main manor house buildings and twenty-five other historical buildings set in fifty hectares of beautiful parkland by the Mustoja River in the Lahemaa National Park. 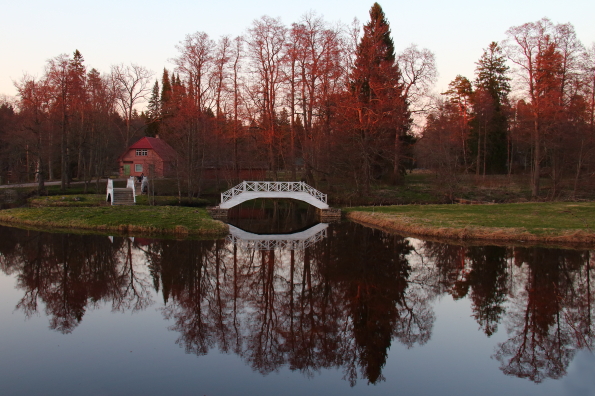 After our adventure in the bog we drove to Rakvere, Estonia’s fifth largest city, overshadowed by a twelfth century castle and home to the interactive Estonian Police Museum. Merit, our sparky guide, led us through a series of rooms including the traffic room, protect yourself room, the riot room, the drugs room, the prison room, the surveillance room, the detection room and some incident rooms where visitors can look for clues to solve the crime. Shooting to burst the tyres of a fleeing car is also one of the outdoor activities here. 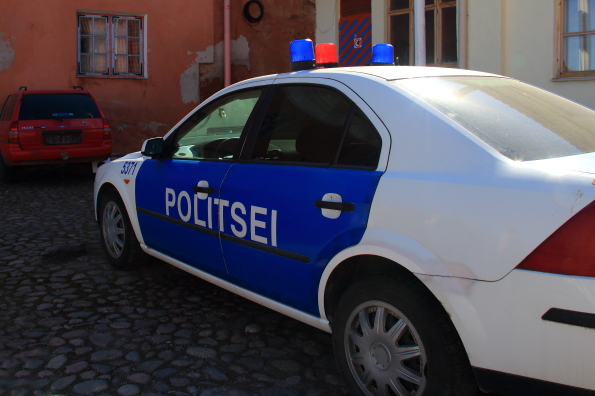 Nearby Lake Peipus in East Estonia was a refuge during the seventeenth century for old believers who fled there to escape Russian persecution and their descendants still inhabit the small fishing villages strung around the water’s edge. They worship – an old form of Russian Orthodoxy – in beautiful iconic churches. While we were in this area we visited one of these churches, an Icon Centre and a samovar museum browsing the small souvenir shops at each one and drinking tea with onion bread at our final stop. 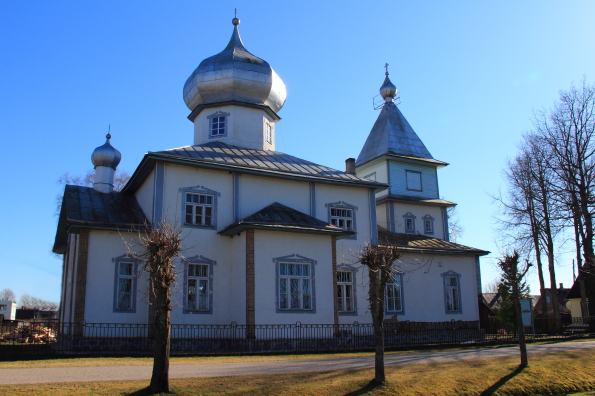 That evening we dined in splendour at the Alatskivi Castle which was designed and built between 1876 and 1885 by Baron Arved von Nolcken using the royal residence at Balmoral in Scotland as his inspiration. This castle is considered the most beautiful neo-gothic building in the Baltic States and features an interesting exposition in the cellars where the staff used to live. Our meal included traditional fare – duck fillet with mashed potatoes followed by cottage cheese foam. 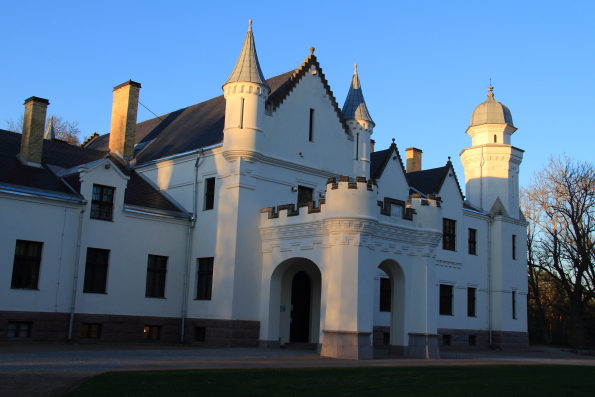 Tartu, the oldest University town in Estonia, was full of surprises. These included a large mural on the back wall of one of the university buildings and windows painted on the front with portraits of people inside and the main building of the university which is an outstanding example of classicistic architecture. Inside this building we climbed up to the attic to visit the lock-up room where students were put if they had transgressed. Their imprisonment was not too arduous as they were allowed to have servants with them, to go out each day to do some shopping and to draw on the walls. We were lured up the hill above the town to explore the Old Observatory and emerge at the top to look out on the town below us. 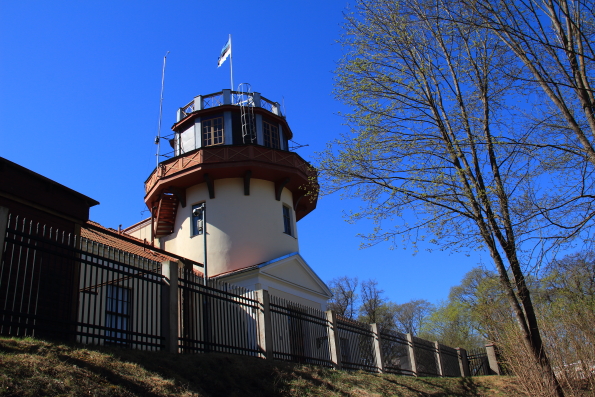 We wandered around Toome Hill on our way back to the town admiring the buildings that include the ruins of a twelfth century cathedral and the Old Anatomical Theatre as well as the Supreme Court. We walked across the wishing bridge and made a wish. The wishing bridge is in front of the kissing hill and next to the sacrificial stone where students burn their notes after finishing their exams even though this activity is strictly forbidden. No visit to Tartu would be complete without a nostalgic stroll around the Toy Museum situated in two of the oldest buildings in the town. 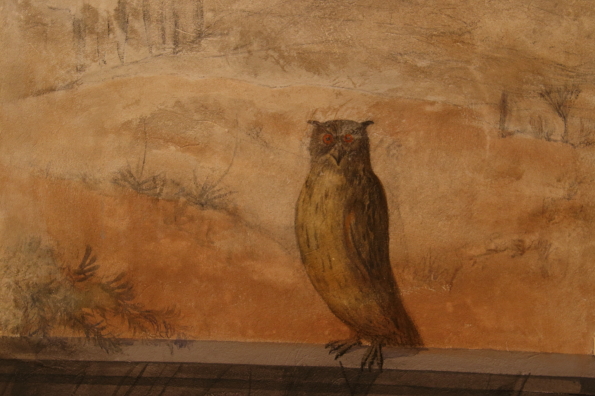 In Varbuse at the Estonian Road Museum a replica of the famous old Postal Road winds its way through one of the buildings of the old postal station with different sections depicting different eras in its history. We learnt how the road was built and anecdotes related the fate of the first driver to cause a fatality in his car – he was shamed into giving up driving himself – and the success of the first bridge built by Estonians – it fell down. Across the road the outdoor section included a display of old road signs, old vehicles and some original petrol pumps. Initially there were no petrol stations as car owners would buy their petrol from lorry drivers. The latter were paid by distance covered so they would fiddle the milometer and then had to get rid of the surplus petrol. The museum also has an interesting collection of old vehicles that range from a horse drawn carriage to one of the original snow ploughs. 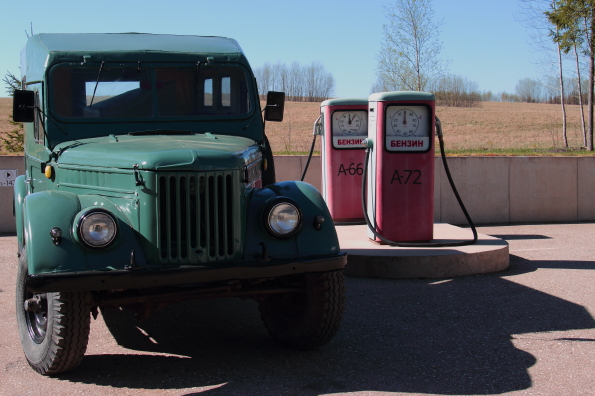 Viljandi was once the home of the naïve (self-taught) artist Paul Kondas whose paintings are exhibited in the Kondas Centre which is housed in an old Lutheran Church. His most famous painting, Strawberry Eaters, has pride of place and concrete strawberries abound in the streets of this pretty little town. 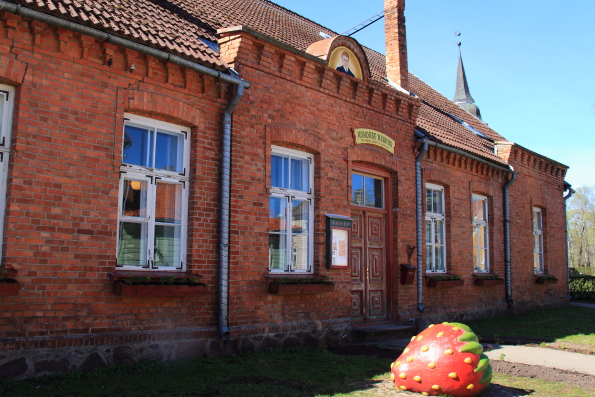 Much as we would have liked to linger there we had a lunch date to keep at the Wittenstein Time Centre that occupies the re-built tower of castle on Vallimäe Hill in Paide. An elevator rises through a different era on each of the eight floors – the days of knights, kings and tsars; the period of occupation; the first Estonian republic; and the period of the country’s regained independence and each layer was enhanced by different effects. Our Time Lady, Kadra led us on this journey resplendent in her flowing cape and long blue locks. A medieval lunch was prepared for us by Lììlia an expert in the food and culture of that period. 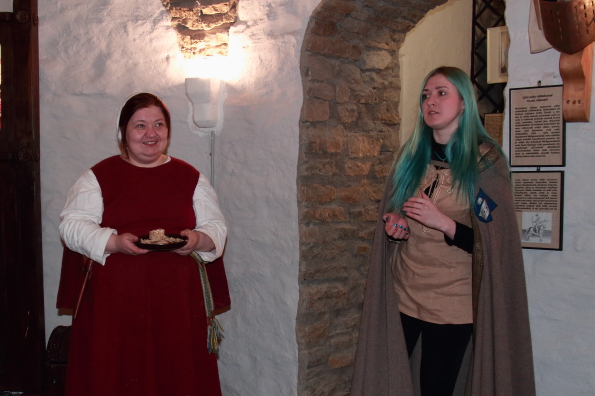 Tallinn was our final destination in Estonia. We stayed at the Savoy Boutique Hotel which occupies a building on the edge of Tallinn’s Old Town, built in the 1890s and renovated in 2006 in the Art Deco style. It was convenient for our walking tour of the town. Despite being invaded by the Danes during the thirteenth century, sold to the Germans, conquered by the Swedes and occupied by Russia (twice) Tallinn is famous for having an almost complete medieval centre. Even the bombs of the Second World War failed to destroy the charm of this Baltic capital. The old town still has the two distinctive centres that developed following the Danish invasion – Toompea, the upper town and the lower town. Traditionally Toompea has always housed the administrative buildings whereas the lower town developed as the commercial centre. This was the area that we explored starting in the Town Hall Square. The Town Hall itself is at least six hundred years old and has the oldest surviving Gothic façade. In the far corner of this square is the oldest pharmacy in Europe that still operates as a pharmacy and a small museum. In the Latin Quarter we visited a courtyard that was the site of a Dominican church and monastery. Both institutions were involved in education and commerce as the town developed setting up in opposition to the Upper Town. Only the monastery remains now and is the site of a café. After visiting the Masters Courtyard for a break at the very popular Chocolateria we made our way to the lively Leib ja Aed restaurant for a delicious dinner. 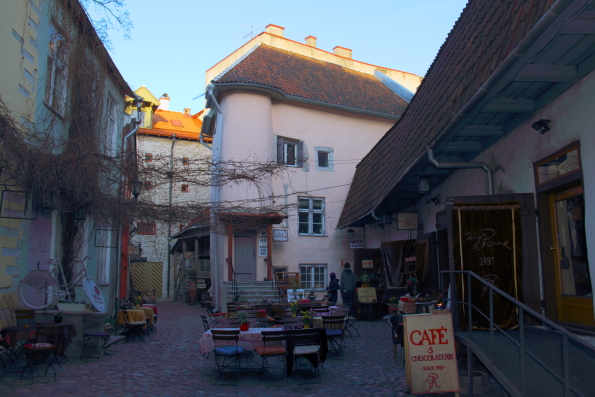 The Estonian History Museum is housed in the beautiful Old Guild Hall and includes a permanent exhibition “Spirit of Survival 11,000 years of Estonian History” which helps visitors to understand the singularity of the people who have lived in Estonia and introduces historical events that have most affected them illustrated by, for example, the Song Festival that takes place every five years and originally was a celebration of Estonian songs. On the first floor a series of posters told the story of the Old Guild Hall and the society it hosted. In the basement there is a very good example of the medieval heating system whereby warm air from a large oven was released into the rooms above through vents. 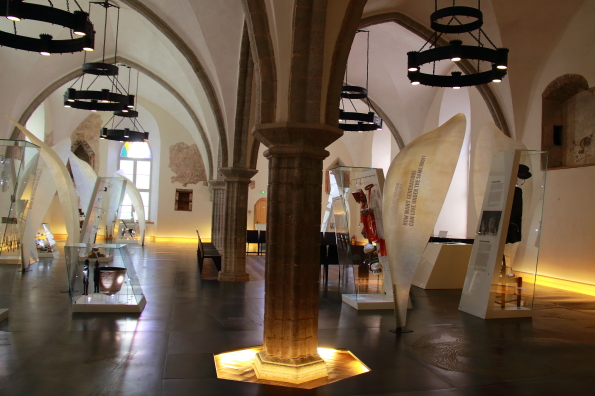 Another interesting structure houses the very modern seaplane harbour museum – seaplane hangars that are architecturally unique and part of a complex initially completed as part of Peter the Great’s Naval Fortress in 1916-1917. This museum combines both past and present, land and sea and its technology allows people to investigate the history of the exhibits, play games and send information to their own email address. Modern technology does not invade the interior of the submarine Lembit and our museum guide told us the history of this vessel as we bent double to clamber through its interior. 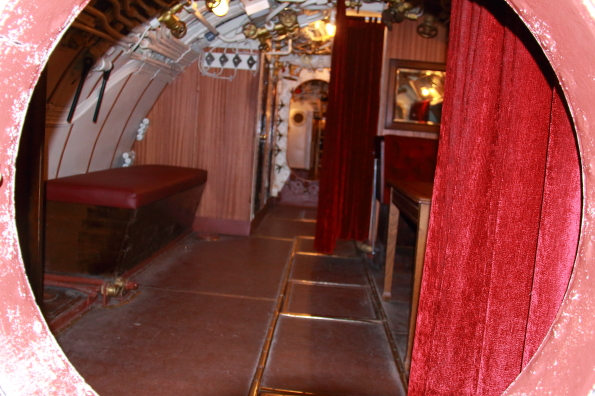 We were drawn into the story of the ‘secret’ of the 23rd floor at the Hotel Viru by the acting skills of our guide Maire. We took the lift up to the twenty second floor and then after passing through an iron gate walked up two flights of stairs to the top floor. Maire told us how the KGB had used this secret floor as a communications centre during the Russian occupation of Estonia. She described the floor managers, who recorded every visitor to every floor and the listening rooms where guests were spied on from the room next room and she showed us some of the devices used for spying throughout the hotel. After the tour we went out on the balcony where the city was spread below us – a patchwork of pastels and medieval grey. Tallinn is reputedly the jewel in the crown of Estonia but we found some other precious stones during our travels. 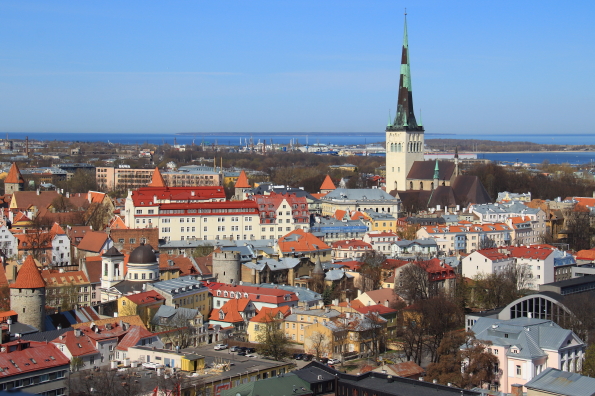