I felt like a bird perched on the roof of St Peter’s flanked by rough-hewn statues of Jesus, eleven apostles and Saint John the Baptist.

It was not unusual for minor artists to be commissioned to produce these gigantic sculptures that due to their lofty position would not be subjected to close scrutiny. But that was when no one envisaged people climbing up to roof tops to enjoy the panoramic views. Unlike a bird I had not flown up there and continued up the narrow staircases that spiralled around the cupola itself. When I emerged I could see the bustling Piazza S. Pietro below me and beyond that the Tiber River glittering in the sunshine. I remembered that the first time I had visited Rome, on a city break with Solos Holidays, when we had strolled along the banks of the Tiber before crossing the river to the lively district of Trastevere where we had enjoyed a delicious pizza while soaking up the atmosphere. 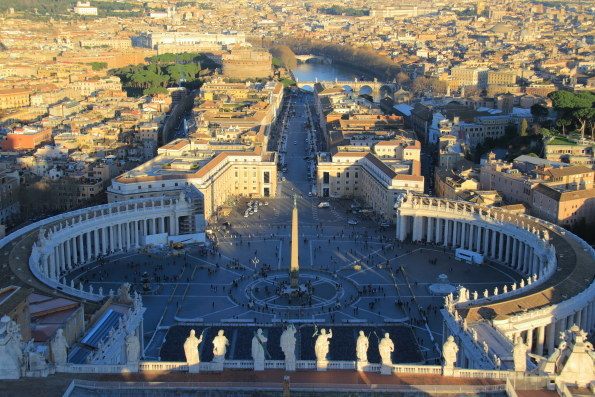 From my vantage point I could see the roofs of the Vatican Museums that include the fantastic Sistine Chapel. I had visited the chapel on the third Sunday of the month when entrance is free but it does involve a very early start to beat the queues. Despite arriving two hours before the museums opened there were already people waiting but we had already decided not to follow the prescribed route through the museums and made our way straight to the Sistine Chapel. We were among the first to arrive so we could wander at will gazing at the incredible work of art by Michelangelo above us. I had expected muted colours and I was rather startled by the bright hues the result of restoration in line with the original colours. 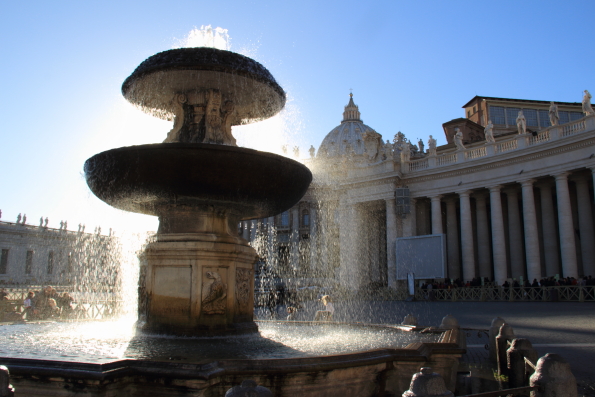 When I descended and was walking back to the metro station I noticed that the queue of people waiting outside the Old Bridge Gelateria was a lot shorter than it had been earlier in the day so I stopped to buy an ice cream. I sat on a wall soaking up the last rays of sun that day while I savoured the delicious flavours of pistachio and black cherry. It had been a busy day and some time for reflection was welcome. In particular I had been impressed by the sheer size of the Pantheon the Roman temple of ‘all the gods’ built by the Emperor Hadrian that seemed to fill the Piazza della Rotondo. I had also been very impressed by the Trevi Fountain a relatively young monument in this historic city its original purpose had been to carry water into the city from the aqueduct Aqua Viga that was built in 19 BC and still brings water into the city all the way from the Salone Springs. I had not really appreciated the genius of the Romans regarding the supply of water to their cities and public baths until I read the gripping novel, Pompeii by Robert Harris. 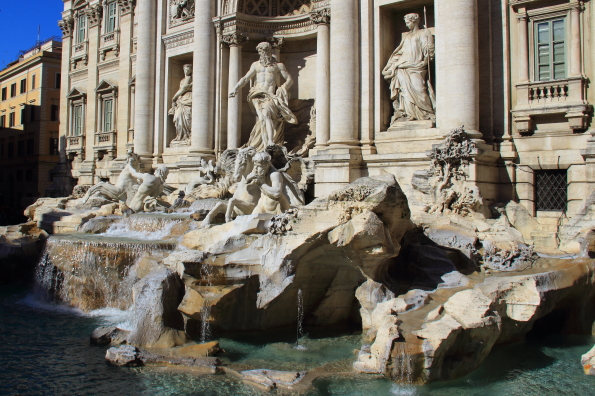 The memorial to Vittorio Emanuele , a huge building featuring many Corinthian columns and staircases all carved in white marble, also allows access to its roof via a glass encased lift. Two horse and chariots race both driven by the goddess Victoria race on each size of the large terrace from where I was able to identify the Colosseo and the Trajan Market. I blushed as I remembered one memorable visit to the former when I became imprisoned in the cubicle of the men’s toilets. The helpful attendant had ushered me in there and then abandoned me so I had to scuttle past four men, eyes averted, and then swallow my embarrassment and join in the general mirth regarding my predicament. A few minutes later my companions had been snaffled as we made our way to the Palatine Hill entrance to buy our tickets. There is very rarely a queue at this entrance and the ticket covers the Colosseo, Palatino and the Foro Romano. They had been promised immediate entrance into the Colosseo and a guided tour. I was doubtful but was carried along by their enthusiasm and the tickets were purchased. We then waited for a long time while they touted for more people and finally, when the number reached forty, we began our tour of this famous amphitheatre 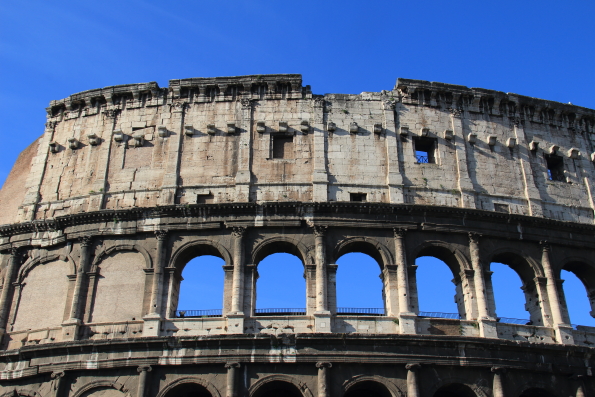 Below me I could pick out the red double decker buses that do hop on hop off city tours as they circled the Piazza Venezia below me. Rome was my first experience of these buses which are an ideal way to explore a city especially in the fierce heat of the summer. I particularly enjoyed the view from the Janiculum the second highest hill in the modern city of Rome but not one of the proverbial Seven Hills of Rome as it is west of the River Tiber and outside the boundaries of the ancient city. This was the site of a memorable battle which is commemorated by statues including Garibaldi himself and his closest comrade his Brazilian wife, Anita. Next stop Piazza della Republica where, through the shimmering spray of the water in the Fountain of the Nymphs I could see an old church that aroused my curiosity so I crossed the piazza to investigate. It was the Church of Our Lady of the Angels and the Martyrs a unique Renaissance church in Rome designed by Michelangelo and built inside the Roman walls of the Diocletian baths and dedicated to the Christian slaves who died building the baths. The outer walls of this church are partially formed by the original walls of the baths which accounts for its strange exterior. Inside there was an organ concert taking place and I stopped to listen while examining the intricate interior. 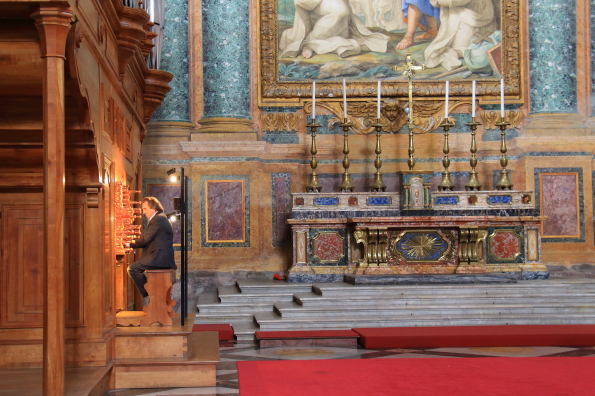 On my most recent visit to Rome, February 2014, we stayed in the Hotel President which is conveniently placed for the Colosseo and other major attractions and those further afield were easily accessible on the Metro as the Manzoni station was right outside the main entrance. As it was February and pleasantly warm we were happy to explore the city on foot. My first stop was the Basilica of St John in Laterano easily recognised by the impressive statuary that tops its white façade. This cathedral was the first to be built in Rome when the Emperor Constantine allowed the Pope to establish the centre of the Catholic Church there in 312. This impressive building has been destroyed and re-constructed several times and boasts an elaborate interior. Attached to it is the red brick Laterano Palace which was the original residence of the popes when they came to Rome and they lived there for a thousand years until Pope Clement transferred the papal residency to Avignon. In 1377 the Pope returned to Rome and chose the Vatican Palace as his official residence and home and it remains so today. 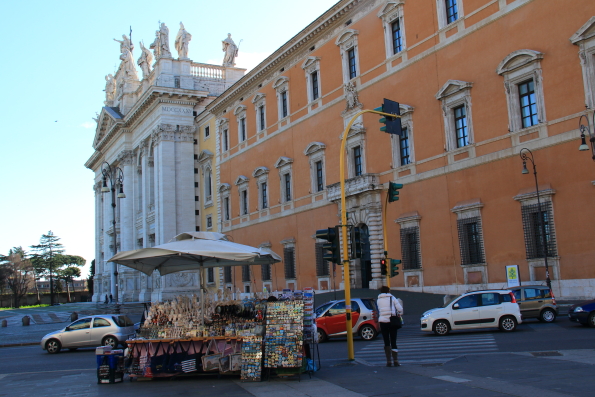 Our hotel, the Hotel President, was also conveniently placed for local restaurants and I particularly enjoyed the Ristorante Cannavota a long established family run restaurant where the food good and reasonably priced. But my favourite dining experience in Rome has to be in the Piazza Navona a pedestrianized square graced by three Baroque fountains – the Fountain of the Four Rivers is the most impressive. Seated in an open air restaurant the setting is perfect. Visitors stroll by, some stopping to inspect paintings displayed by artists: buskers entertain, sometimes simultaneously, accompanied by the gentle splash of water in the fountains – the very essence of Rome below its splendid rooftops. 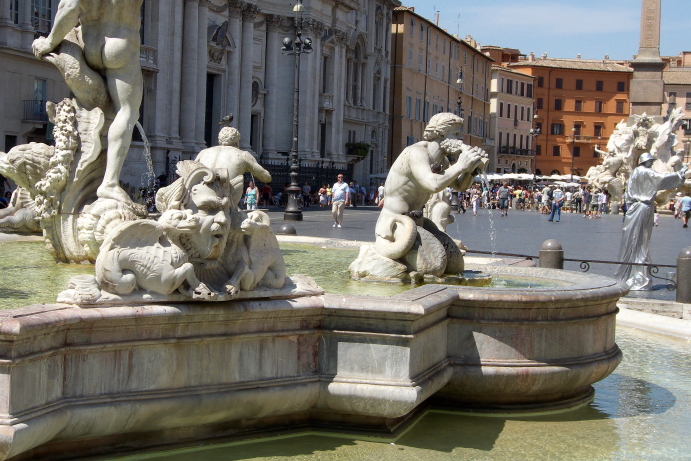