My first ski trip was a blast. It was a university trip based in Westendorf , Austria and we were all beginners. We denuded the local trees of snow as we bounced from one to the other and slid backwards more often than we glided forwards. For three of us our final accolade was successfully tackling the toboggan run on skis. We built up so much speed on the way down that when we reached the valley we flew across a car park (empty at the time) and then up the nursery slope. Our progress was finally halted by members of our ski school group when we crashed into them.
The real reason the trip was so good was because I was part of a group – there was always someone to ski with. I was keen to replicate that first experience. Having recently acquired a non-skiing partner I had to go it alone or not at all. I found a company that claimed to offer places for independent travellers and set off full of excitement and some anxiety as I would be sharing a room with a complete stranger. Within forty-eight hours my room-mate had met Mr Right and I took up residence in the corridor. Sometimes I was dressed only in a bathrobe when they took advantage of my habit of wallowing in the bath in the communal bathroom. It was that or share with a strange man. After three unsuccessful attempts to ski on my own I took up golf.
Then I discovered Solos Holidays. I knew immediately that Solos fitted the bill as I had a good insight into the needs of the single skier. My Solo’s skiing experience began in Monte Bondone, a small ski resort in the Dolomites. As ski lessons were included we all spent the morning in ski school and most of us were in the same class as we were divided by language rather than ability. After meeting up for lunch we formed our own groups to ski or to pursue other snow-based activities such as tobogganing, snow shoe walking, cross country skiing or snow blading. We all had fun together. 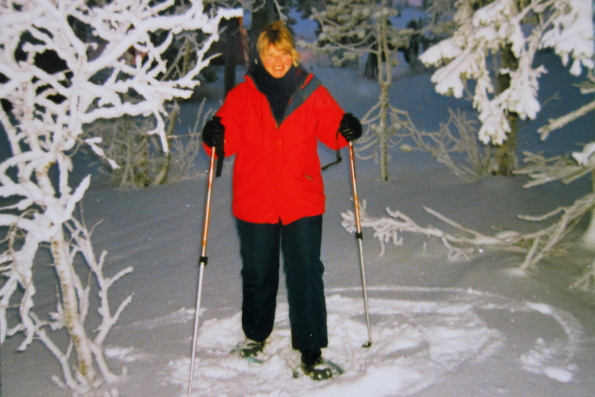 Solo’s philosophy is to send a tour leader with each group – someone who acts as a hostess and a problem-solver. Hostessing involves the organisation of a welcome drink, information meeting and dinner on the first day. This is a chance to get to know other members of the group and assess skiing prowess. The tour leader is a source of useful information regarding ski hire, the purchase of ski passes and the booking of ski lessons. These tasks are usually undertaken during the first morning and generally involve a certain amount of chaos and confusion but having someone ‘in charge’ smoothes the way and the group is either on the slopes or in ski school by coffee time.
It is not unusual for notional ski groups to form during dinner the first evening as ski stories are bandied to and fro across our group tables and everyone tries to seek out ski companions of a similar standard. Mismatches often occur as some exaggerate while others play it down but anomalies soon become evident on the first run of the day and new groups are formed over steaming cups of coffee.
It always amazes me how quickly a collection of individuals who have never met before blend into a group whose members support and assist each other. Mobile phone numbers are exchanged and meeting points are arranged throughout the day so that those in ski school have an opportunity to re-join other people after their lessons. Of course, it does not always run smoothly and the tour leader is often summoned to deal with minor mishaps such as mislaid skiers and skis, broken ski poles and uncomfortable boots. At the end of the day there are always plenty of stories to tell over a few drinks in a favourite bar before returning to the hotel.
The Solos ski programme includes a variety of different resorts each with their own characteristics and a variety of other activities to try. In Grindelwald, Switzerland we all had a go at curling which was much more difficult that it looks on television and we spent a lot of time flat on our backs as we failed to master the art of walking on ice. We also took the mountain railway to the highest railway station in Europe, the Jungfraujoch. Part of the charm of this country is the mountain railway system that links into the mainline and on one memorable occasion having gone off piste on the local line we returned via Interlaken – clomping through the main concourse in our ski boots. 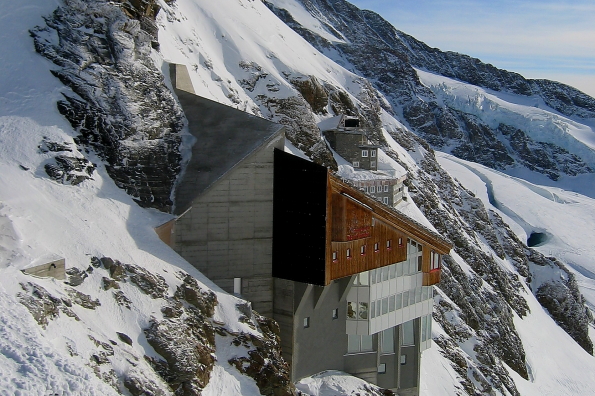 I used a train, the local tourist train, to get to the slopes in Folgaria. This train goes to Costa, one of the four linked ski areas, and I skied from there to meet the group in Fondo Grande where they had stored their skis overnight. I preferred to take my skis back to the hotel every night even though it was not possible to ski from there as we were based in the town a short distance from the ski area. Although the ski area is relatively small it has four separate ski areas and some interesting runs. Being in the town meant we could join the locals as they promenaded every evening window shopping and greeting friends but generally we never got further than the local patisserie where we indulged in hot chocolate and creamy cakes. 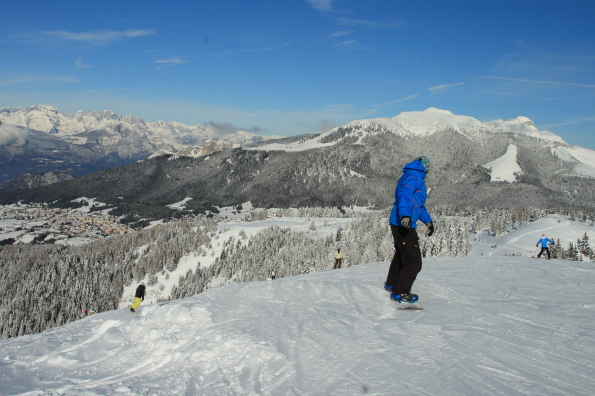 I love skiing at Christmas and New Year when Christmas trees adorned with coloured lights line the roads and light up the lower slopes. Last Christmas I skied in Val di Sole in the Dolomite Mountains. Our hotel, Hotel Alp Dolomiti, was a short distance from the slopes of Folgarida from where it is possible to ski to three other resorts. The group divided naturally into experienced skiers and beginners and I moved between the two groups. I enjoyed both experiences but in particular the pleasure I felt having taken a beginner down their first easy run – and the subsequent celebrations in a mountain restaurant. The slopes in Folgarida are ideal for beginners and the ski instructors speak good English. The whole group was re-united over the sumptuous ski snacks provided by our hotel when we got back from a day on the slopes. 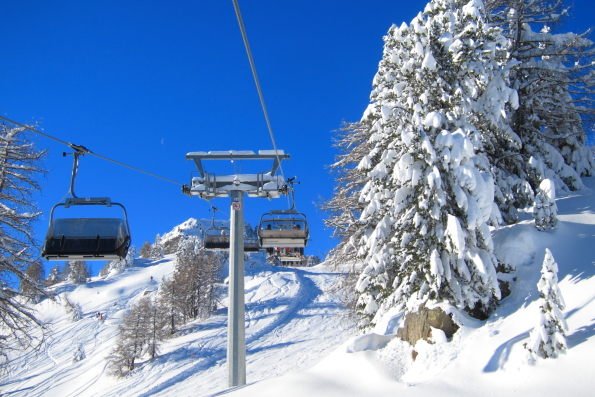 I changed countries for New Year which I spent in the pretty Swiss village of Les Diablerets. I was seven years since I had last stayed there and I anticipated a lot of changes. There were none. The little red cabin lift still ascended slowly to the Isenau ski area and required two attendants at the top and the bottom to handle the skis and lock passengers into the cabins. The same assistant at Savino ski hire still called me cherie and insisted that the skis I selected were pour les enfants. Patrick, our host at Hotel Les Sources was as jovial as ever and the food was as abundant and tasty as ever. Over a breakfast of boil-them-yourself eggs and freshly baked bread we would discuss which of the three ski areas to tackle that day. Isenau was ideal for the first day and we quickly progressed from the easy blues to the steeper red runs. Good weather is essential for Glacier 300 and we enjoyed the powdery snow up there under blue skies and bright sunshine. The ski area around the Meilleret Chair gave access to the slopes of Villars. 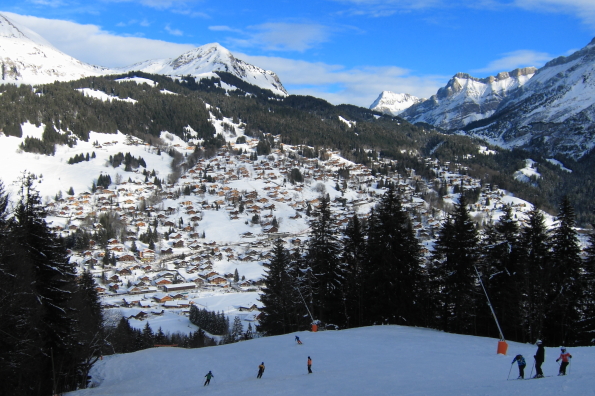 We celebrated New Year with dinner and a disco in the hotel punctuated by a stroll into the village to watch the fireworks. It took some people twenty-four hours to recover from the festivities but the rest of us enjoyed a morning on the unusually quiet slopes.
On the way home as we had an evening flight we left the resort in the morning and, after checking in our luggage we got the bus into Geneva where we spent a few hours exploring the town. We still had enough energy left to climb to the top of the Cathédrale Saint-Pierre for the splendid views of Lake Geneva and the iconic Jet d’Eau. 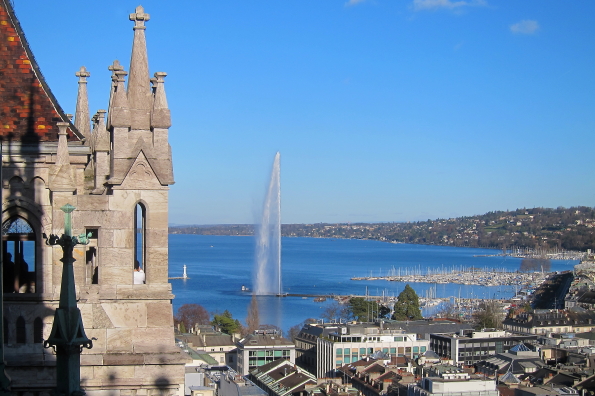 As I took in the sights I wondered what 2014 would have in store for me. I already knew that my first destination would be Madonna di Campiglio in Italy and my favourite destination. Read all about it in my next blog.