The Stafford London is Simply the Best

For that extra special city break in England’s capital city The Stafford London is more than ideal – it is exceptional. Guests here enjoy the best of British hospitality in beautifully decorated rooms many of which reflect captivating tales associated with this hotel.

The buildings occupied by The Stafford London were originally private houses, numbers 16 to 18 St James’s Place. Number 17 was once occupied by Lord and Lady Lyttelton. Following the death of her husband, Lady Lyttelton became Lady of the Bedchamber to Queen Victoria and was later appointed governess to the royal children. She is one of many historic characters associated with the buildings that now house an elegant hotel.

The Evolution from Home to Hotel, The Stafford London

Number 17 St James’s Place changed hands several times during the late nineteenth century and early twentieth century The owners included the Richmond Club Chambers, Green’s Private Hotel and St James’s Palace Hotel. In 1886 the Stafford Club, originally housed in number 18, was added and the hotel was extended to include number 16 in 1912. The Stafford Hotel was born. 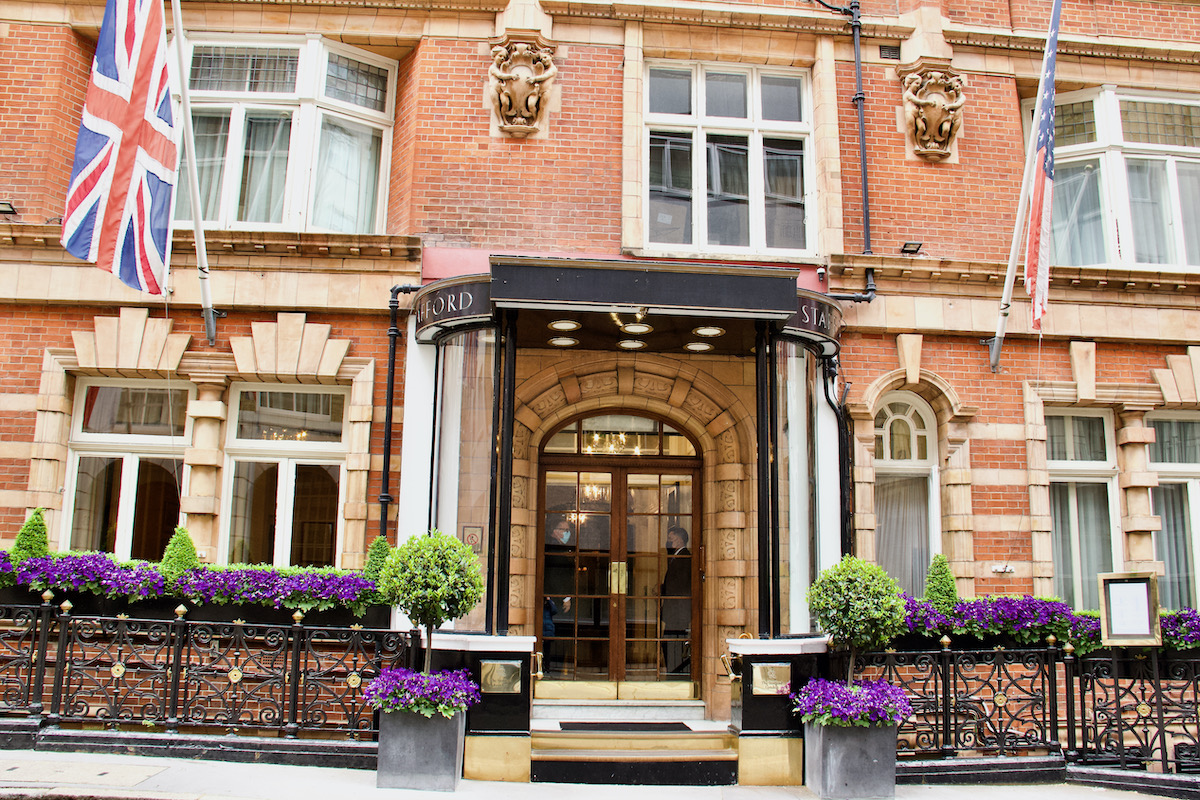 Over the years The Stafford has been owned by different companies including Trafalgar House who owned The Ritz (a near neighbour) and Cunard Cruise Lines. It was this company that developed the world-famous Carriage House rooms thereby establishing the hotel as a favourite London destination attracting many visitors from North America. It has also been part of the Kempinski Hotels collection but this management agreement came to an amicable end in 2014. The hotel is now part of the prestige Stafford Collection. Throughout it has maintained a world renowned reputation for great hospitality in elegantly cosy surroundings. Today guests can stay in stunning accommodation ranging from classic bedrooms to two-story suites in its historic buildings – the Main House, the Carriage House, The Gatehouse and The Mews (the old stables). And dine in style in The Game Bird restaurant. 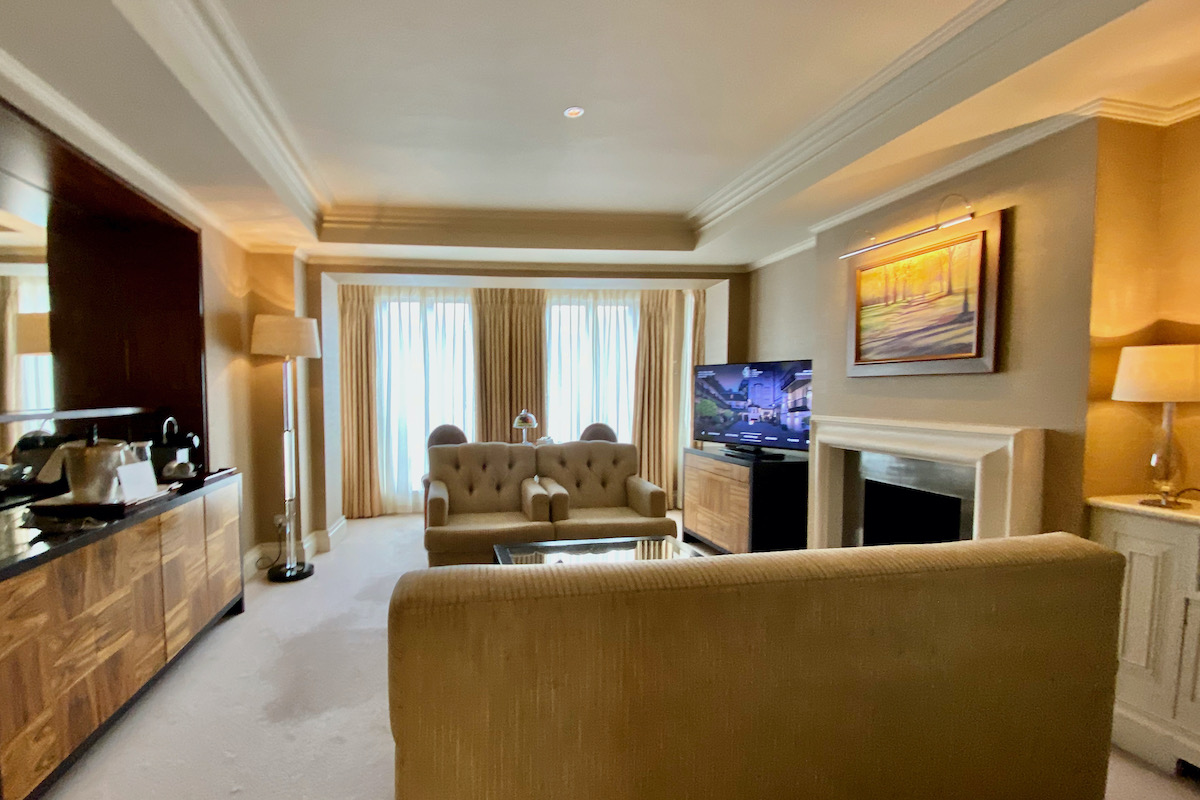 The Game Bird Restaurant at The Stafford London

As the name suggests The Game Bird restaurant features seasonal game on its menu as well as traditional British cuisine. The menus are compiled by Executive Chef, Jozef Rogulski. 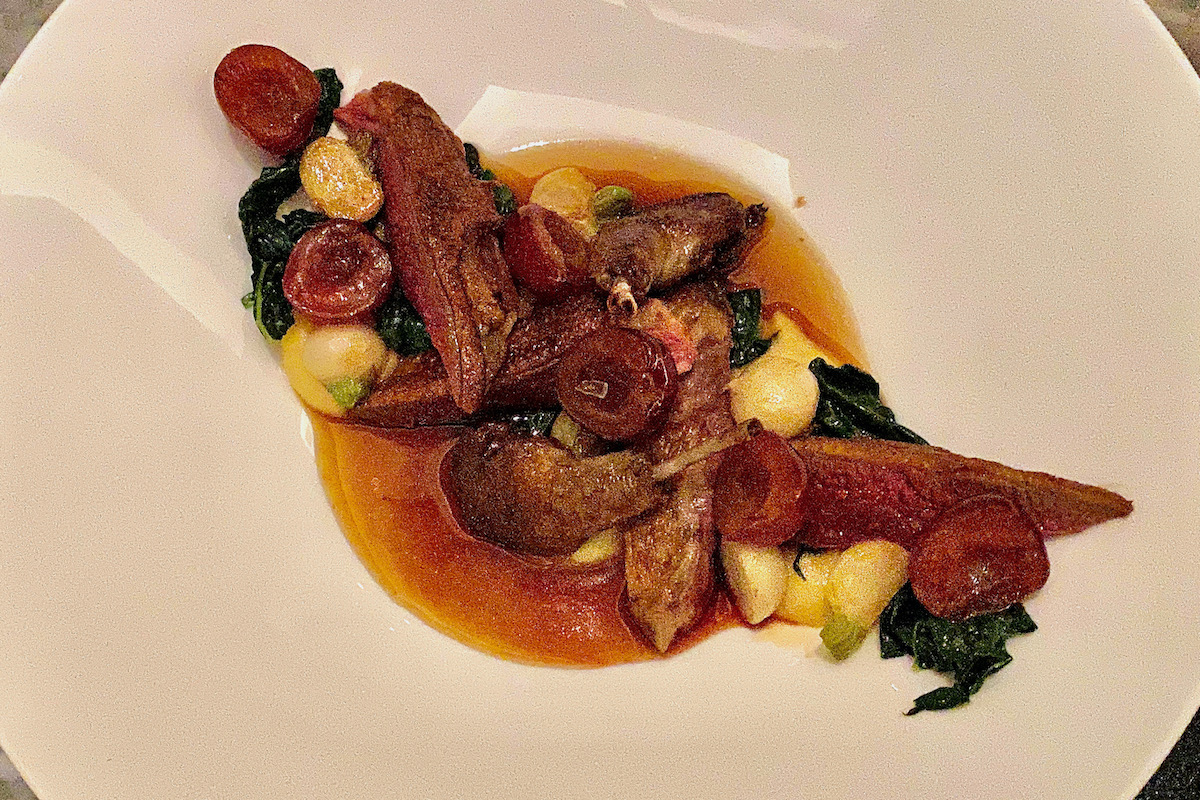 Ben Tish, the Culinary Director of The Stafford is responsible for the Mediterranean light bites served in The American Bar. Guests will notice the Moorish influence in some of the dishes for which Ben is renowned. Those who would like to sample some Sicilian fare with a Moorish twist can stroll along some famous streets of London to the restaurant Norma in the district of Fitzrovia. The concept for this lovely restaurant was created by Ben alongside the team at the Stafford Collection. Ben manages the day-to-day operations of the restaurant which is part of the Stafford Collection. 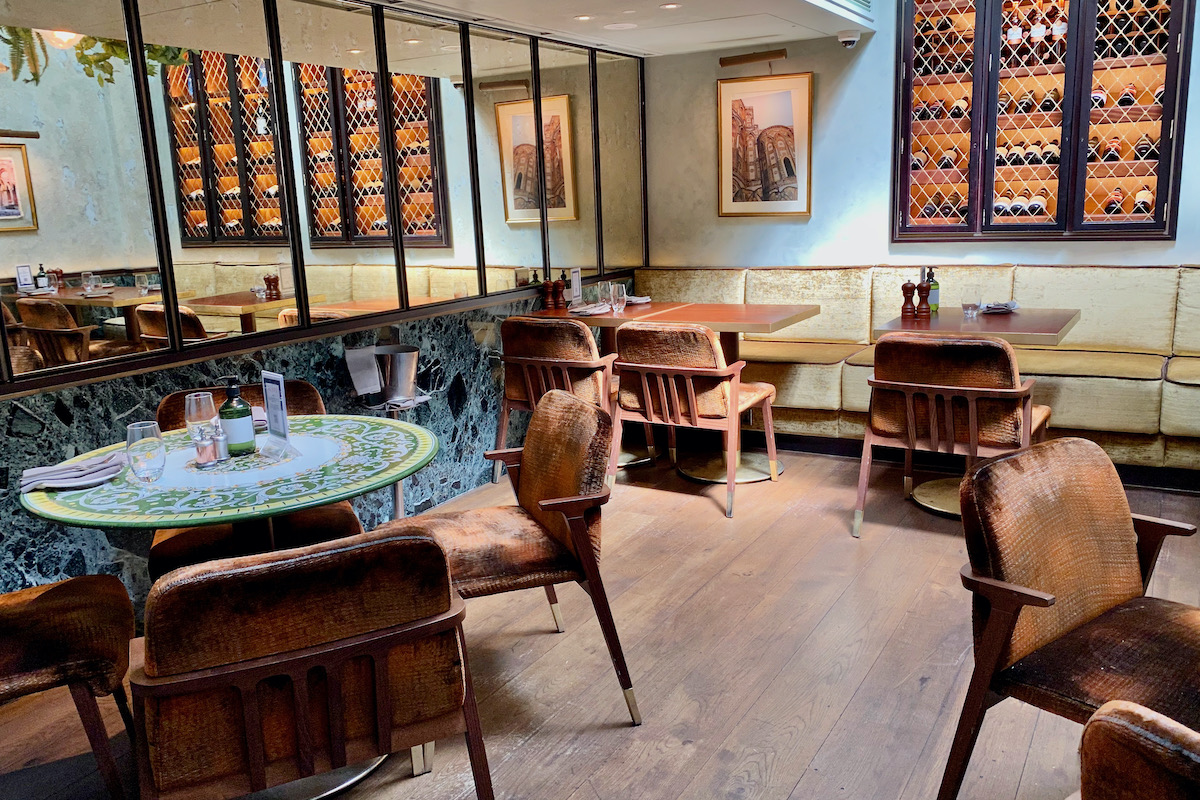 Another game bird is the woman whose portrait looks down on the diners, one of the hotel’s most intriguing guests, Nancy Wake. She was code-named the White Mouse by the Gestapo who consistently failed to capture the Allies’ most highly decorated servicewoman of the Second World War. When the war started Nancy was a young woman living in Marseilles with her wealthy French husband. She became a saboteur and Resistance fighter leading troops in guerrilla warfare sabotaging the Nazis. Her first husband was captured and executed as he refused to betray her whereabouts. The Resistance decided that having acquired a five million-franc price on her head Nancy should return to Britain where she joined the French Section of the British Special Operations Executive (SOE). 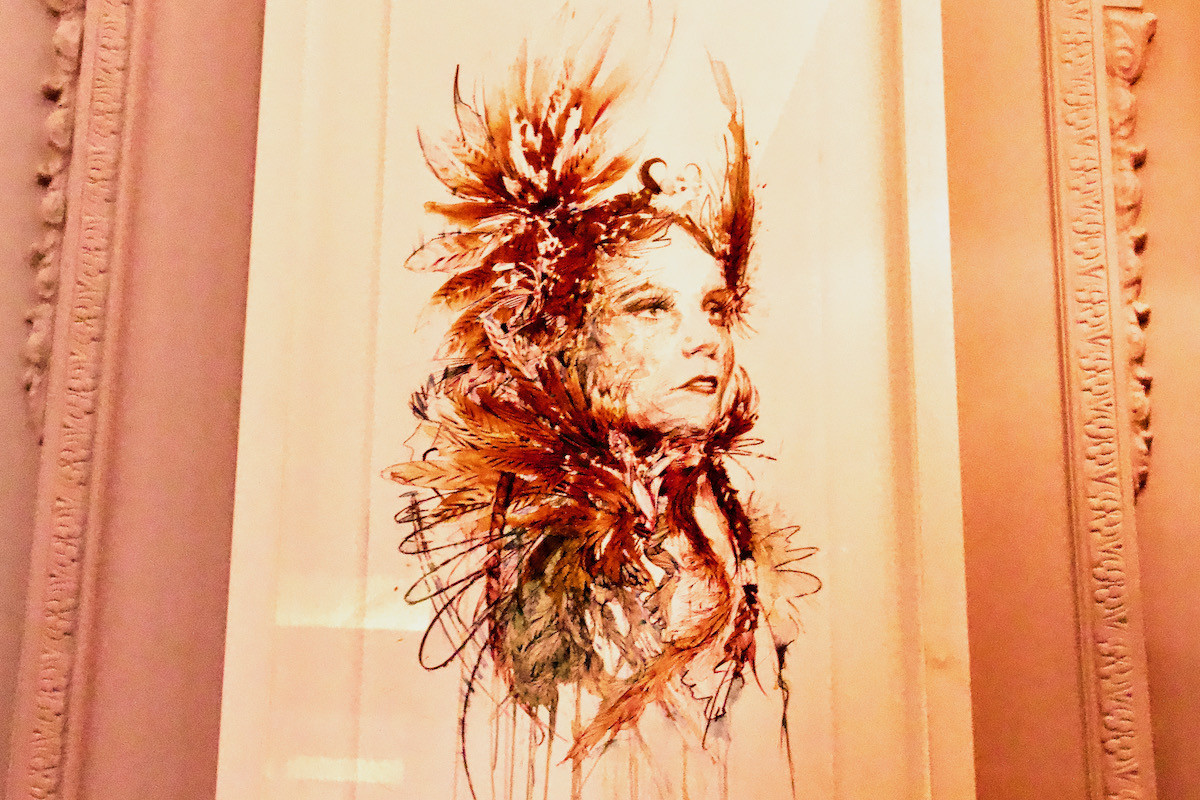 Nancy continued to work with the SOE after the war and in 1960, she married Englishman John Forward, a former prisoner of war. They lived in Australia until his death in 1997 and a few years later Nancy moved to England and became a resident at The Stafford London. The hotel had housed American and Canadian officers during the Second World Warn. Nancy had been a frequent visitor and friend of Louis Burdet then the General Manager who had also worked for the Resistance in Marseilles. During her stay here Nancy slipped into a regular routine. A morning gin and tonic in The American bar perched on a special bar stool the hotel had built for her. She would spend her evenings in the bar regaling guests with tales of her wartime feats. Nancy celebrated her nineteenth birthday at the hotel. By the time she chose to move on to the Royal Star and Garter Home for Disabled Ex-Service Men and Women, in Richmond, London she had amassed a huge bill. The owners of the hotel paid most of it but patrons of the hotel also contributed included Charles, Prince of Wales in recognition of her services during the Second World War. She is commemorated in the hotel’s world-famous American Bar with her photograph at the entrance and a bust at the far end of the bar. The American Bar is considered to be an institution in its own right. 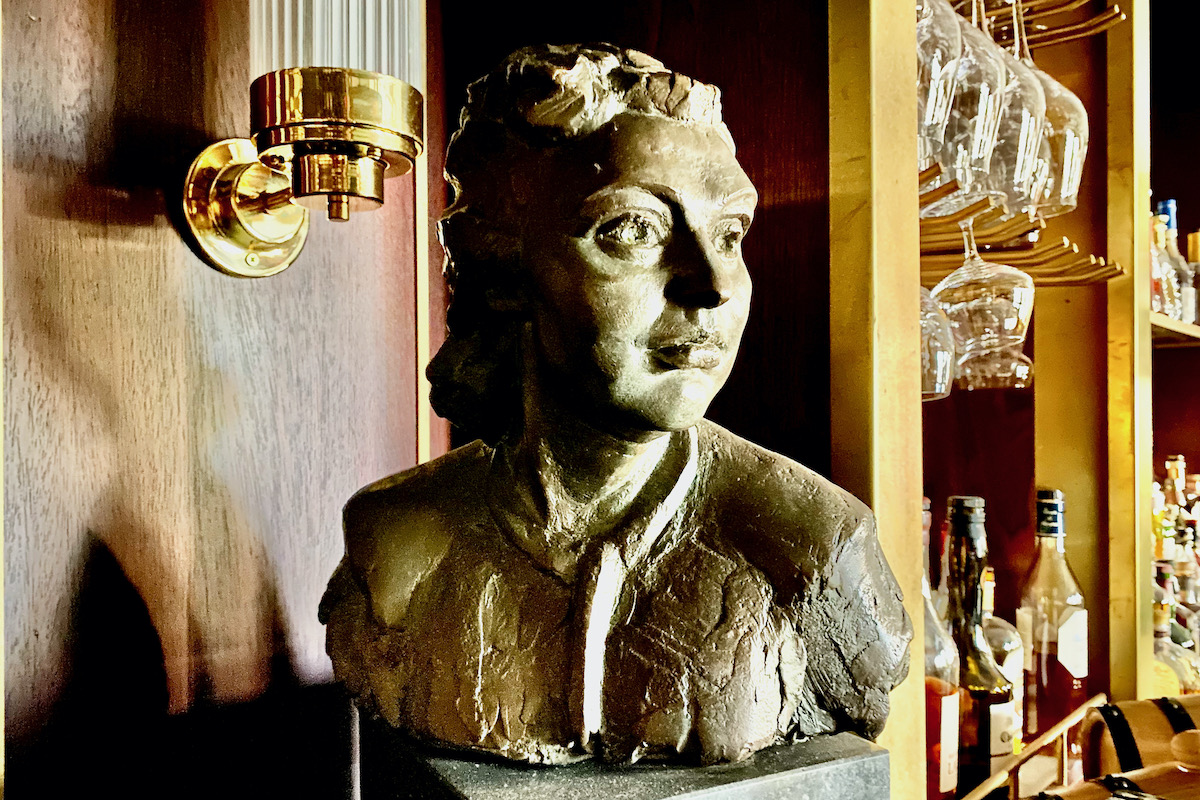 The American Bar at The Stafford London

Visitors to The American Bar will be mesmerised by its fascinating collection of memorabilia including gifts and signed celebrity photographs donated by patrons and guests that covers the walls and ceilings. This collection was started when an American guest gave Charles Guano (Head Barman for 42 years) a wooden carving of an American eagle. Then a Canadian guest gave him a model of an Eskimo and a model of a kangaroo from an Australian followed soon after. And since then the collection has grown to several thousand items. 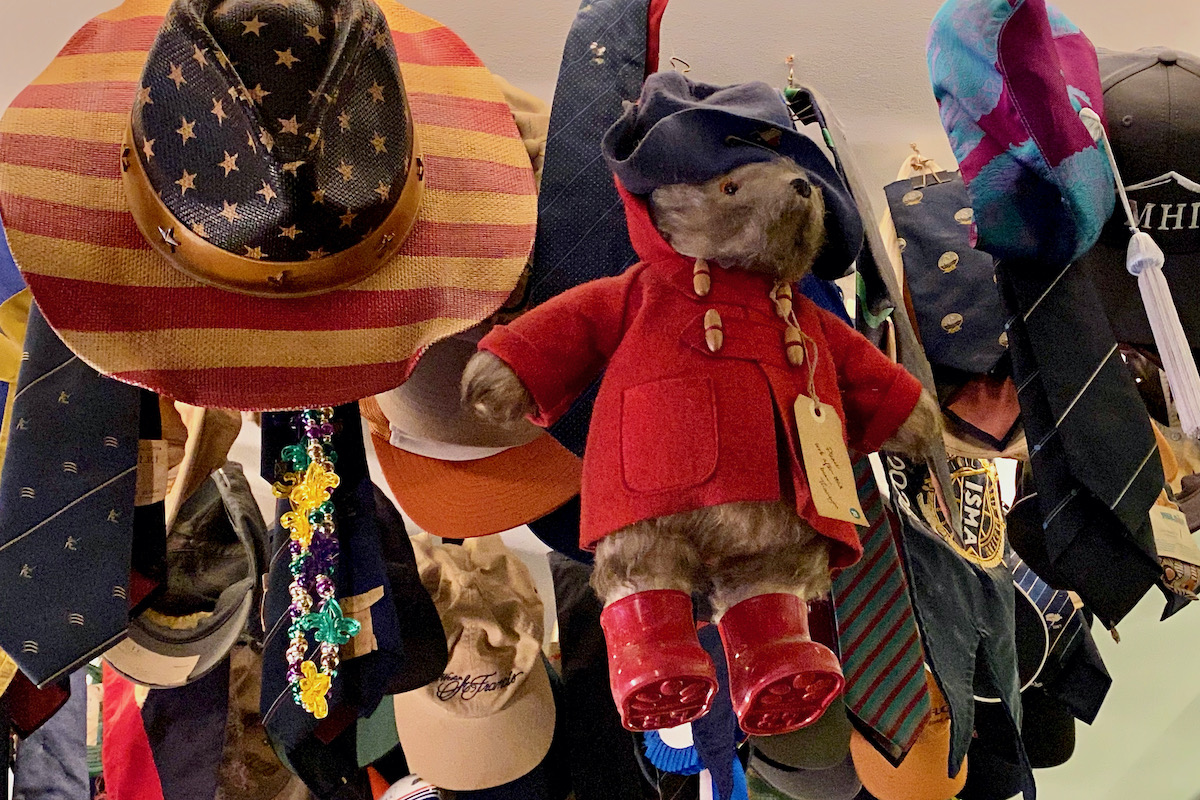 It was fashionable during the 1930s for West End hotels in London to rename their bar “The American Bar”. This was a ploy to attract an increasing numbers of North American visitors looking for American-style cocktails like Manhattans and Martinis. Very few London hotels have retained the name today and The Stafford London is one of them. Traditionally, the head barman here is always French, preserving the unusual Anglo-French-American mix that goes back to the 1940s when the hotel was managed by Louis Burdet, one of the most senior leaders of the French Resistance during World War II. His head barman was Louis Crozetand who was followed by Charles Guano whose protégé, Benoit Provost, manages the bar today. They are all French. The American Bar opens out onto the Courtyard where it features a barbecue menu. 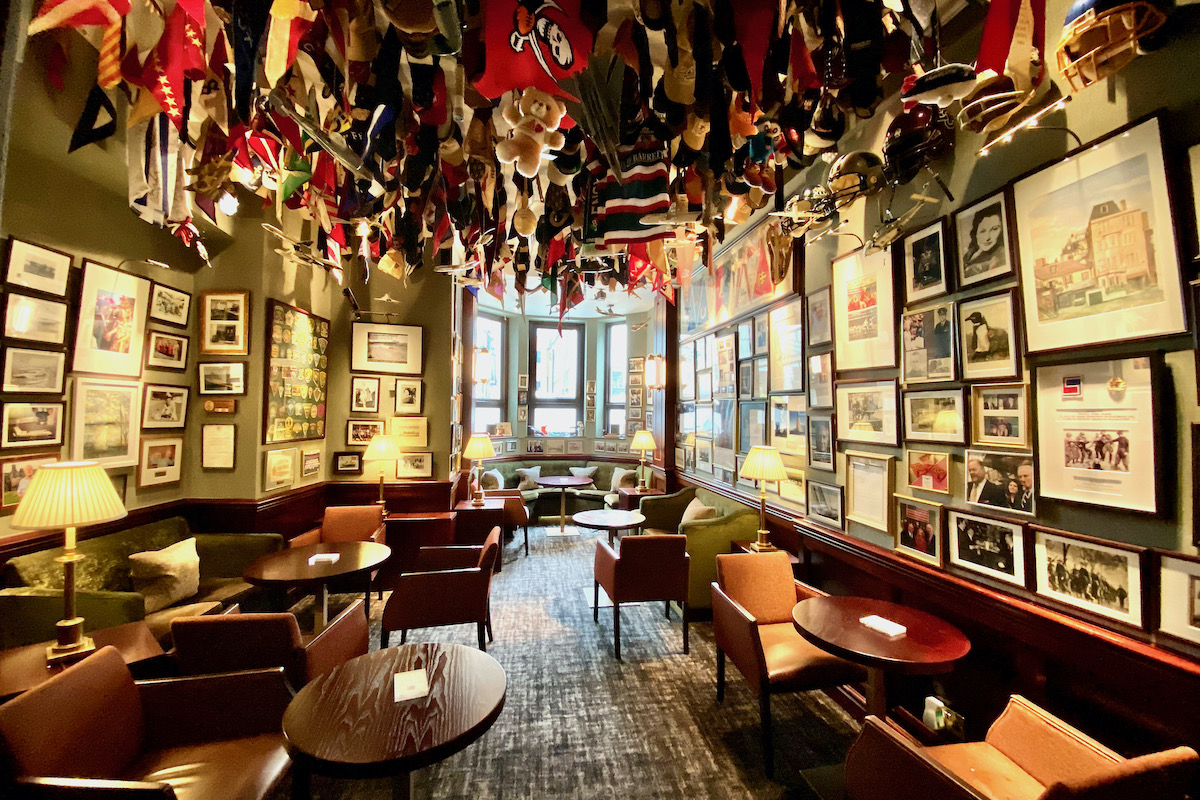 The Courtyard at The Stafford London

Deep in the heart of London the Courtyard at The Stafford London is an oasis for outdoor gatherings, businessmen having breakfast, tourists having lunch, guests having dinner. The place is always busy, waiters weaving between tables. Many years ago horses would have clattered into the courtyard through Blue Bell Yard to be stabled here. Now those old stable house the Mews Suites on one side of the Courtyard. On the other side the Carriage House and the Gatehouse have been converted to the most opulent suites in the hotel. The Courtyard is also connected to the Wine Cellars which also have a story to tell 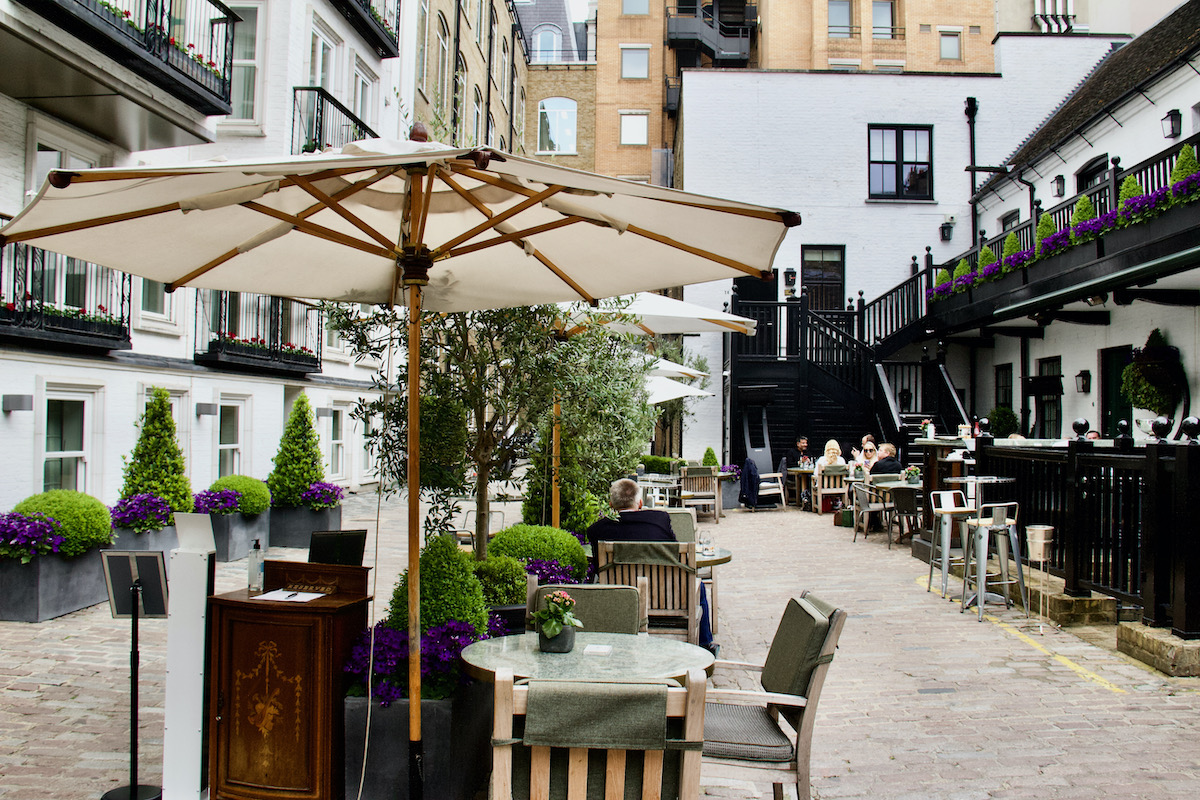 The Wine Cellars at The Stafford London

Nearly 400 years old the wine cellars were built during the seventeenth century by Lord Francis Godolphin. It is said that there were passages between these cellars and the Palace of St James’s the original home of the Royal Family until the reign of Queen Victoria. During the Second World War they were used as air raid shelters although some would claim they are not far enough underground for this purpose. Nevertheless, it is clear they were in use and items collected during that period are now on display in its small museum. 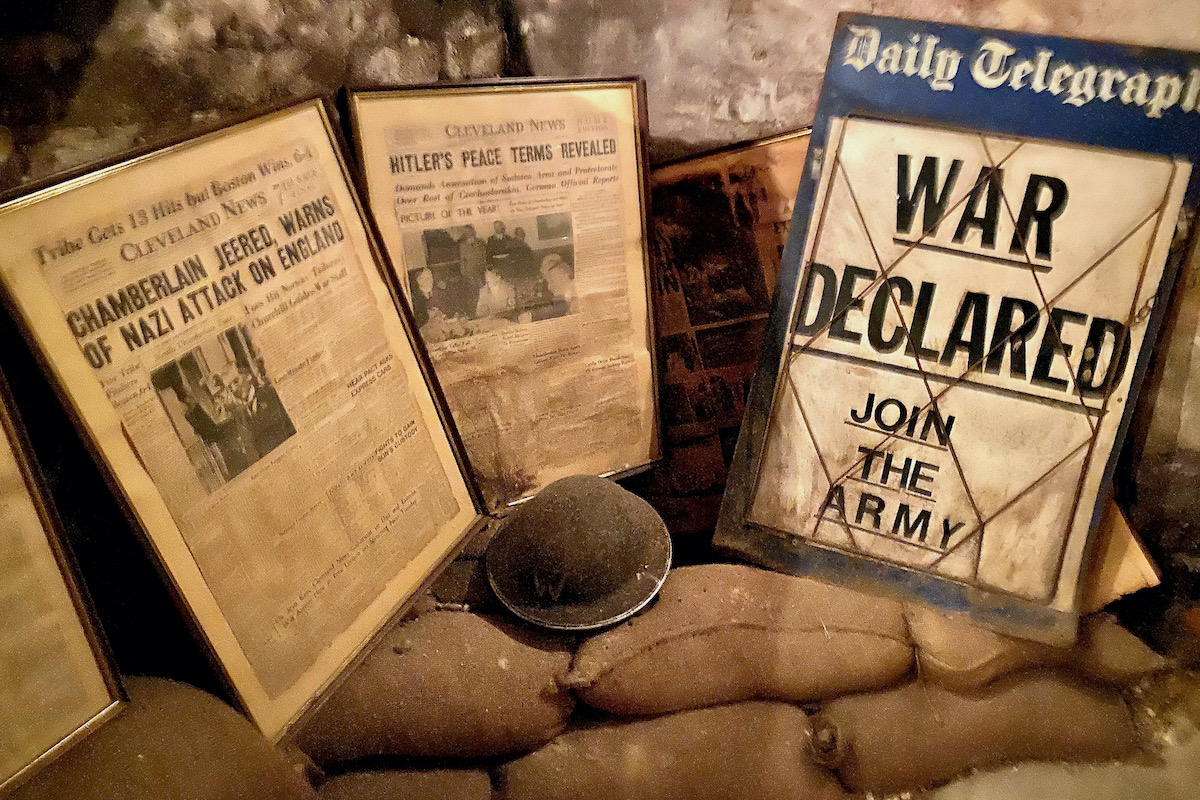 These cellars were also used by the famous Madame Prunier wine shipping company. The last remaining casket and wine corking machinery are displayed in the main chamber. Simone Prunier, granddaughter of the celebrated French restaurateur Alfred Prunier, was a very young restaurateur in Paris and London. La Maison Prunier in St James’s became famous for its fresh fish and shellfish and was frequented by Winston Churchill and Edward Prince of Wales who lunched there regularly with Mrs Simpson. Madame Prunier’s amazing collection of wine was kept in the cellars of The Stafford London during the Second World War to ensure that they were safe and that there was a regular supply of fine wines for her clientele. Private functions and events are now held in these cellars. The working cellars house up to 8,000 bottles of the finest wines, including many rare and precious vintages. It is one of the most complete wine collections in London, and includes an impressive selection of vintage cognacs, Armagnacs, ports and single malt whiskies. These cellars are the pride of Gino Nardella a master sommelier who has been associated with the hotel since he came to England from Italy to improve his English over forty years ago. 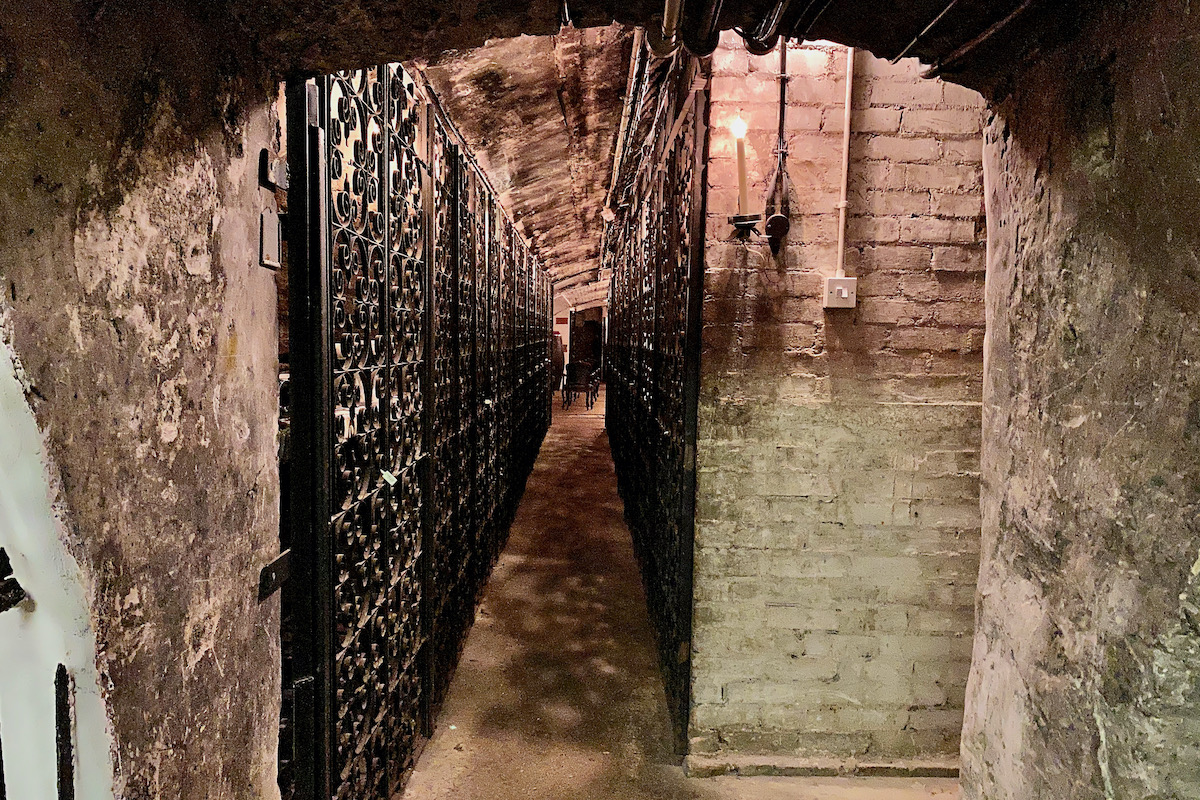 One of the highlights of my stay at The Stafford was a conversation with Gino, master sommelier. His passion for wine and his work philosophy are both admiral. He believes that people should drink the wines they like and his role is to establish what they like. And encourage them to experiment. He also described his team at the hotel as his second family. Members should be nurtured and encouraged to progress even if it meant moving on. Gino, despite many offers, has not moved on. Because he is doing what he loves to do and in the place he has always felt he was meant to be. 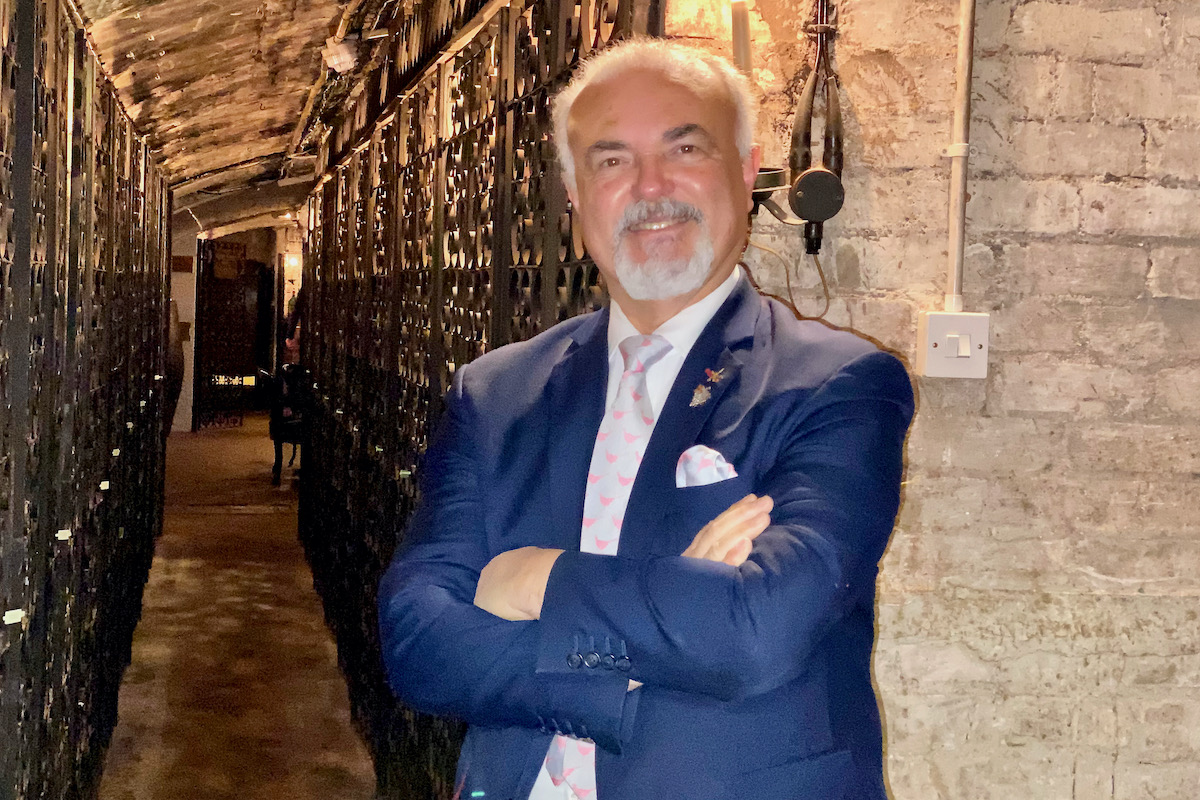 This wonderful hotel combines an interesting history with legendary hospitality and friendly, efficient staff who are proud of its heritage and take the time to relate to their guests the many stories associated with The Stafford London.