There is so much to see and do in Saint Omer in the Pas de Calais department of Northern France where do I start? At the beginning – with Saint Omer himself.

During the seventh century when Saint Omer (also known as Audomar) was bishop of nearby Thérouanne he was sent to a place called Sithiu to bring Christianity to that area. He was assisted in this task and the local language by Saint Bertin. Both were to leave their mark on the town that was subsequently named Saint Omer.

Ruins of the Abbey of Saint Bertin in Saint Omer in Pas de Calais, France

They were quick to establish the Catholic area and by 649 had erected the Church of Our Lady of Sithiu on land donated to the church by a wealthy citizen. A small monastery was added to the church and it was known as the Abbey of Saint Peter, named for its first abbot. Saint Omer gave this monastery to the Benedictine monks of Saint Bertin on condition that he would be buried at the site and that the church would serve as a burial place for the monks. By the eleventh century this abbey had become famous as centre of holiness and education. Around this time the name was changed to the Abbey of Saint Bertin. It continued to develop and by the fourteenth century had evolved into a fine Gothic building. The monks were expelled in 1791 during the French Revolution and the abbey and is church were sold at auction in 1799. Today this abbey lies in ruins But enough of it remains for visitors to appreciate its former grandeur. A magnificent statue of Saint Bertin stands by the entrance to the abbey. It is not known exactly where Saint Omer was finally laid to rest but it is most likely it was in the cathedral of Saint Omer. 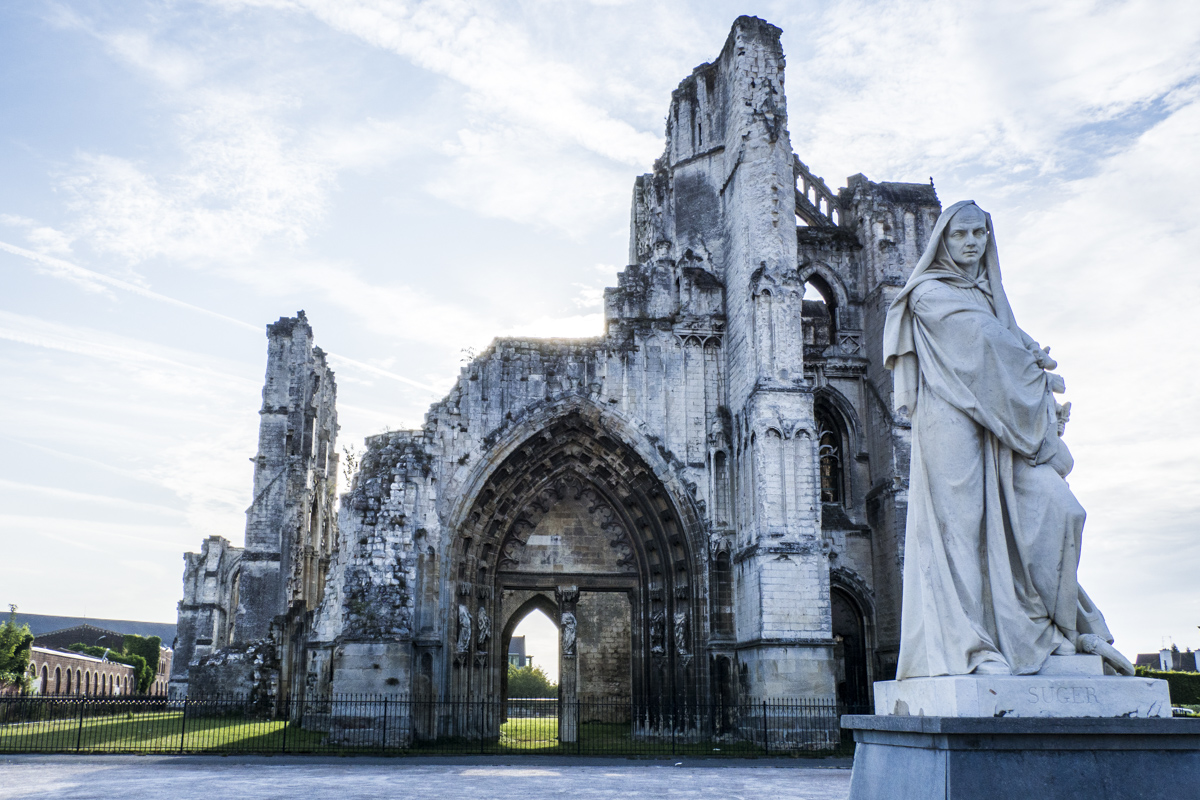 It was six centuries after the arrival the first evangelists in Saint Omer before its cathedral began to take shape. The thirteenth century was a time of burgeoning prosperity for the town rivalling the likes of Bruges, another medieval town surrounded by water. Notre-Dame Cathedral took three centuries to complete but when it was finally finished during the sixteenth century it was hailed as one of the best examples of Gothic architecture in Northern France. I was impressed by the spacious, elegant interior, the huge organ and the fascinating astrological clock that has graced the northern transept since 1558. 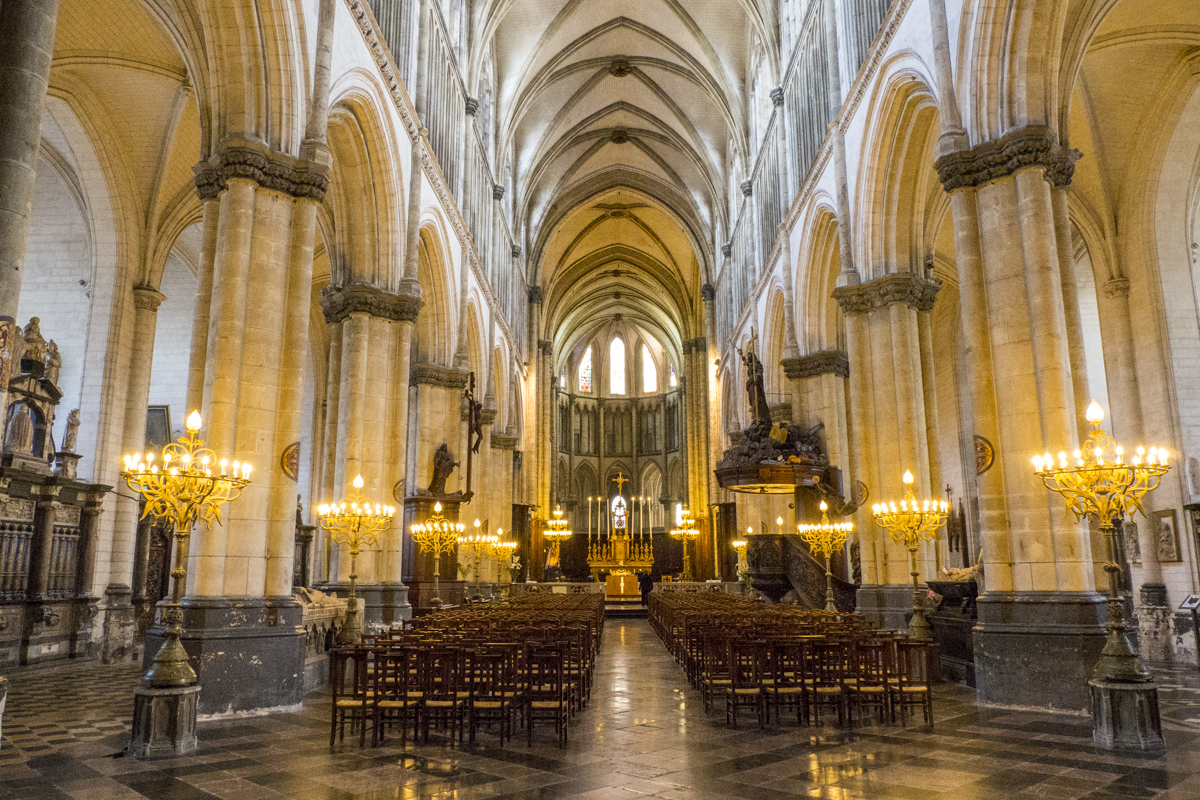 The Canals of Saint Omer in Pas de Calais, France

The monks of the Middle Ages were industrious people and their monasteries and abbeys were self-sufficient. When the monks arrived in Saint Omer during the ninth century they were faced with nearly nine thousand acres of the marshy wetlands of the River Aa, the Audomarois marsh. They soon discovered that the soil under the water was peat which is very fertile. So they dug up the peat, by hand, creating channels and draining the water. The peat was piled up on the sides of the channels creating areas of fertile soil. Two types of waterways were created, the public canals known in French as wateringues and the private dykes known as watergangs. Today the marsh is divided into three areas, the western part which is very residential; the eastern area which has the most farms and the central and smallest area which is residential with some farming. The houses of the market gardeners on the banks of the waterways are generally small and constructed using light materials as the ground is soft and unstable. Solid foundations cannot be laid as the water is not far below the surface. Two typical boats are used on the waterways the bacôve and the escute. The former, flat-bottomed wooden boat was the working boat and used to transport vegetables and equipment as well as the occasional cow. The latter, a smaller boat, was the residents’ mode of transport around the waterways. Today roads have encroached the marshes and bridges link many of the properties to these roads so boats are not used so much. Bacôves are now being used for boat trips from the neighbouring village of Clairmarais along the waterways so visitors can appreciate the handiwork of the monks and the extent of the waterways they created. The history of the waterways and their importance as a habitat for wildlife is explained at the Maison du Marais in Saint Omer.

Waterway on the Audomarois marsh in Saint Omer in Pas de Calais, France

Maison du Marais on the bank of the River Aa in Saint Omer is a very modern interpretive centre. It illustrates the reasons why the Audomarois marsh has been designated a UNESCO biosphere reserve due to its importance as a habitat for wildlife. The centre also narrates the history of the marsh with reference to its traditions and cultures. During the nineteenth century the marsh developed as a centre for market gardening. Today it is the only large marsh that is still cultivated in France. Nearly fifty different vegetables are grown here and particularly popular are cauliflowers (introduced in the mid-eighteenth century) and the winter endive which was introduced around 1920. I was very impressed as the interpretive centre is not only inter-active but includes many information boards in braille. Boat trips on a Bacôve and interpretive walks are available from the Maison du Marais which also has a shop and a café. 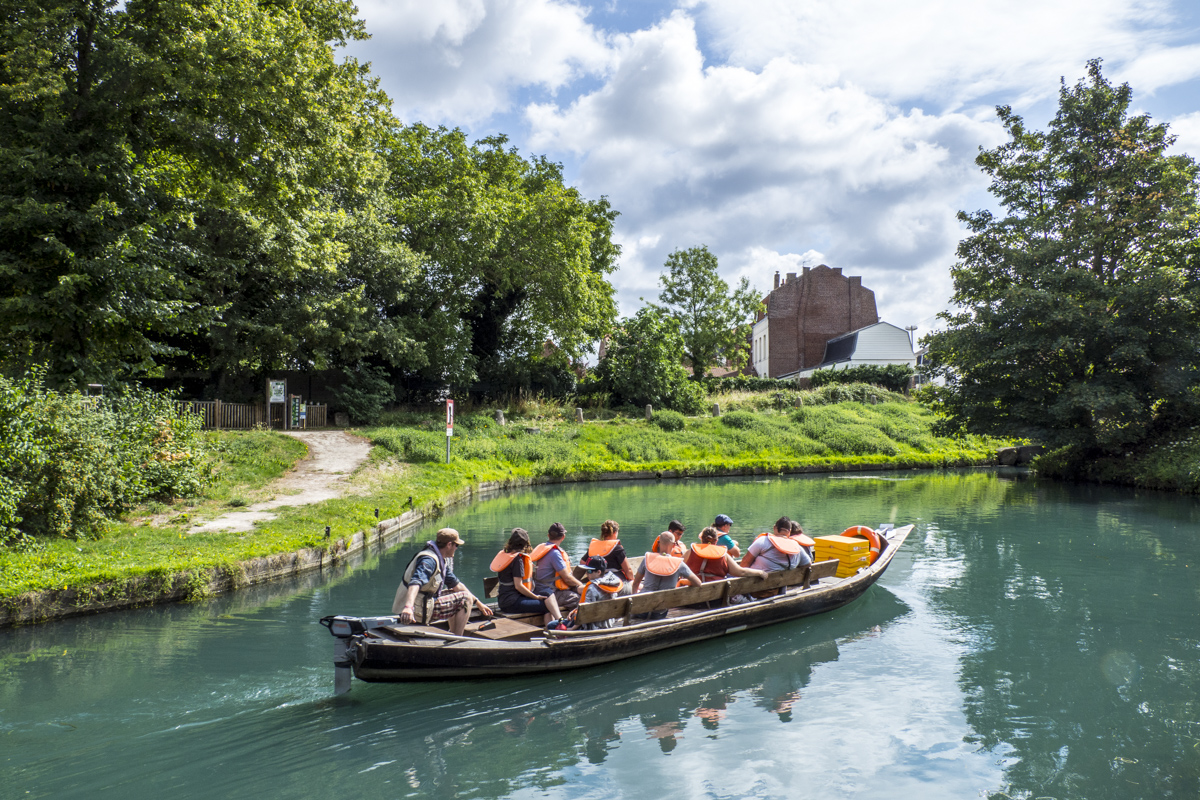 Boat Trip on a Bacôve in Saint Omer in Pas de Calais, France

The Ramparts of Saint Omer in Pas de Calais, France

As Saint Omer became more important it also became necessary to defend itself and its first castle was built by the first Flemish counts (Saint Omer was once part of Flanders) in the tenth century. It is a rare example of a motte-and-bailey castle. As the importance of the castle declined its keep of this castle was used as a prison. When it was destroyed at the beginning of the eighteenth century it was replaced by a prison. The prison is now open to the public. The remains of the old city walls have been incorporated into a public park, the Jardin Public de Saint Omer This huge garden comprises three distinct areas. Take the steps down to the lower level and beyond the large public car park (free) are some charming formal gardens at the base of the ramparts. At the top of the steps leading out of these gardens are some themed flower beds full of vibrant blossoms. Beyond the flower beds is a large arboretum with several paths winding through the trees. This area features a small animal park. During an early evening stroll through these amazing gardens I met people training, children playing and even a lady training her dog. Emerging from the park I soon found myself in the main square of the town, in Place Foch. 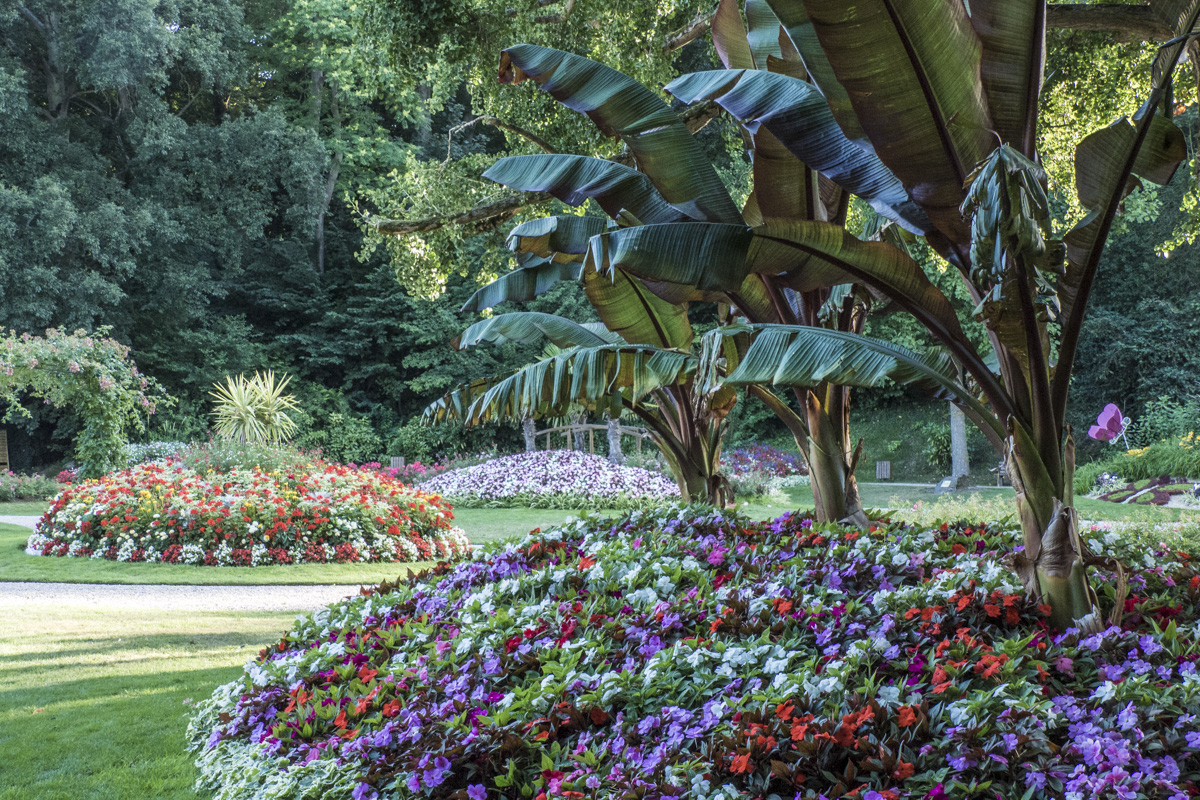 It was early evening and the restaurants that ringed Place du Maréchal Foch were overflowing with animated patrons. This attractive town centre showcases many seventeenth century houses some built in the Flemish style that is typical of this region. The square is dominated by the neo-classical Hôtel de ville or town hall. Built during the nineteenth century using materials from the Abbey of Saint Bertin it now houses an Italian style theatre on the first floor and traditional tea rooms on the ground floor. Currently this square is also used as a public car park but there are plans to restore it to a paved, pedestrianised area. 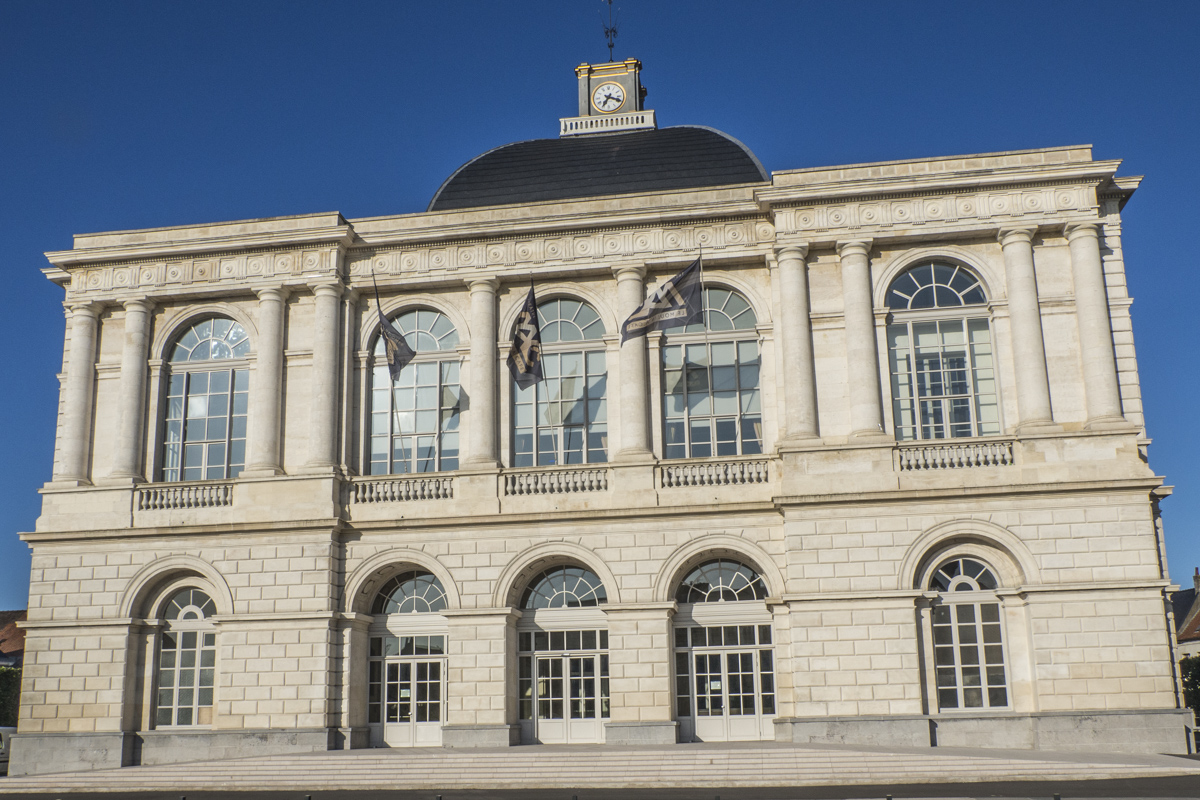 As Saint Omer grew and prospered beautiful mansions were built and a variety of industries grew up around the town. Both are illustrated at the Musée de l’hôtel Sandelin. The Museum Sandelin is housed in a private mansion built to a particular design referred to as l’hôtel. These grand residences were built around a courtyard with several bedrooms to accommodate guests. Built at the end of the eighteenth century l’hôtel Sandelin is one of the best examples of this style of architecture in France. The city of Saint Omer bought this house at the end of the nineteenth century and the museum opened in 1904. Since then it has been displaying various collections dating from the Middle Ages to the nineteenth century in its twenty-one beautiful rooms. The museum also hosts temporary exhibitions. I was really impressed by the collection of delicate clay pipes that was once a thriving industry in the town. The making of ceramics in the style of Delft pottery was also once very popular here and there is a large collection of both the copies and the genuine article. After this fascinating insight into the history of Saint Omer there was one place I had to see before I left the area – La Coupole. 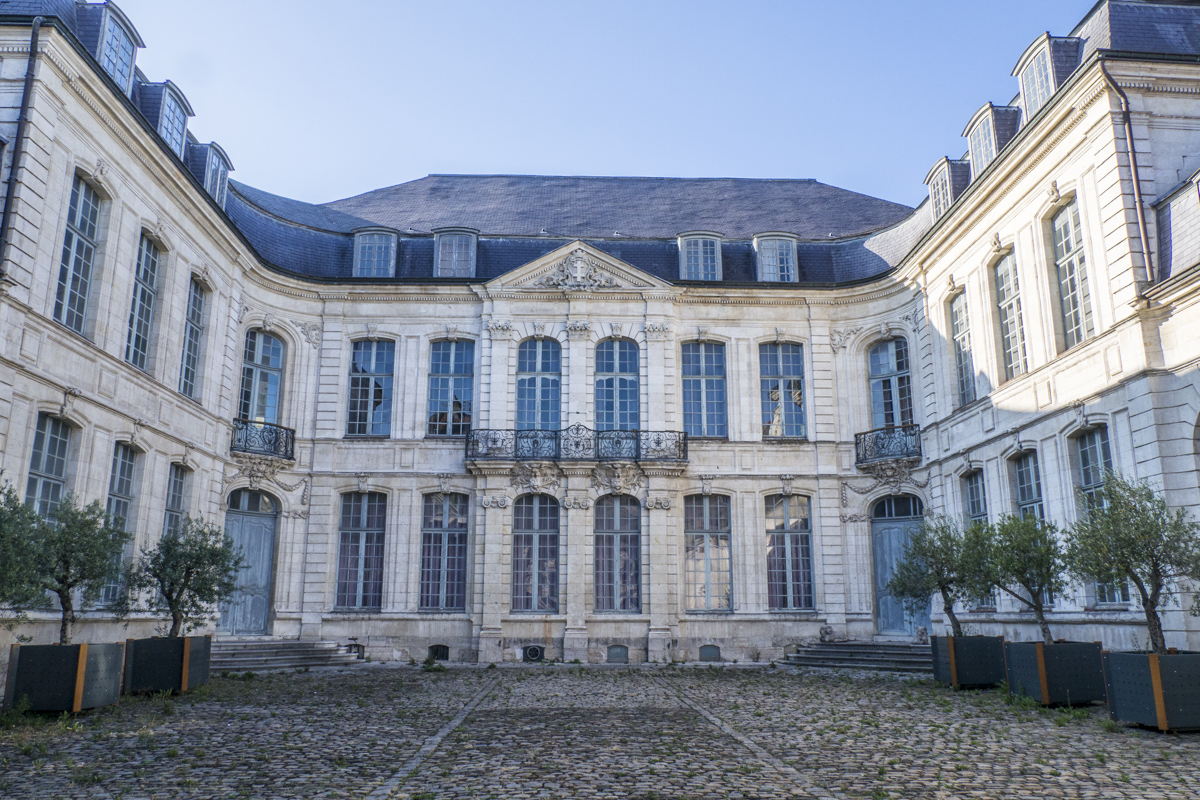 “La Coupole”:“https://www.lacoupole-france.co.uk/history-centre.html at Wizernes, just outside Saint Omer, is an impressive remnant of the German occupation during the Second World War. It was restored and turned into an excellent History and Memory Centre which opened in1997. Visitors can wander through the extensive tunnels to a large exhibition space. Here films and exhibits relate the story of this huge underground bunker where the” V2 missiles”:https://airandspace.si.edu/collection-objects/missile-surface-surface-v-2-4 were mass-produced to launch on London. Deportees from concentration camps were used to build the bunker and produce the V2s. It is a sombre indictment of the futility of war and the huge suffering it caused. The inventors of the V2 were subsequently employed on the rocket development programme in the United States – their war crimes conveniently forgotten. This is definitely an experience that should not be missed by anyone visiting the area. 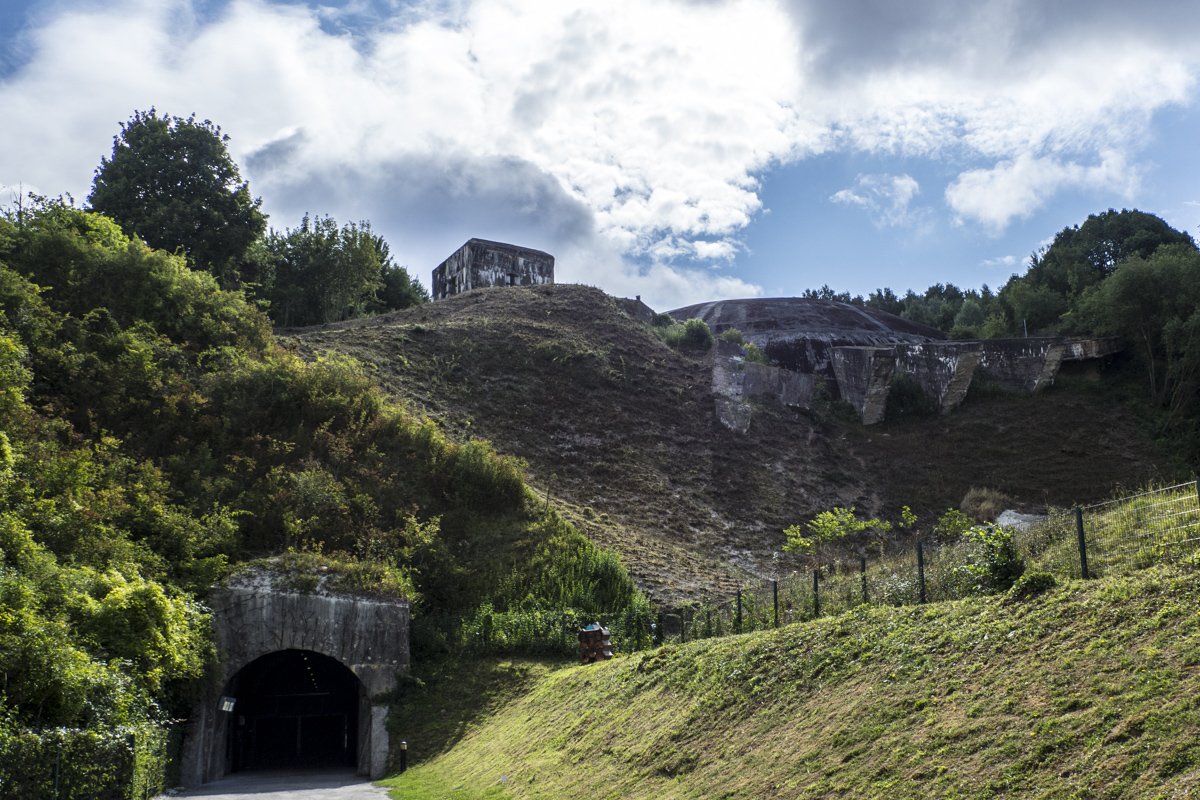 Where to Eat in Saint Omer in Pas de Calais, France

The popular Restaurant Les 3 Caves on Place du Maréchal Foch offers an unusual ambience and traditional French cuisine. There are three eating areas, an outside patio, an upstairs dining room and the simulated cave on the ground floor. As I wanted to try and traditional dish I chose the carbonade flamande. A Flemish dish it comprises beef slow cooked in beer and sweetened by the addition of gingerbread. It was served with a portion of perfect, crispy chips – or should I say pommes frittes. My dessert was also a traditional dish – profiteroles – but filled with vanilla ice cream and covered in hot chocolate sauce. A meal to relish and remember. 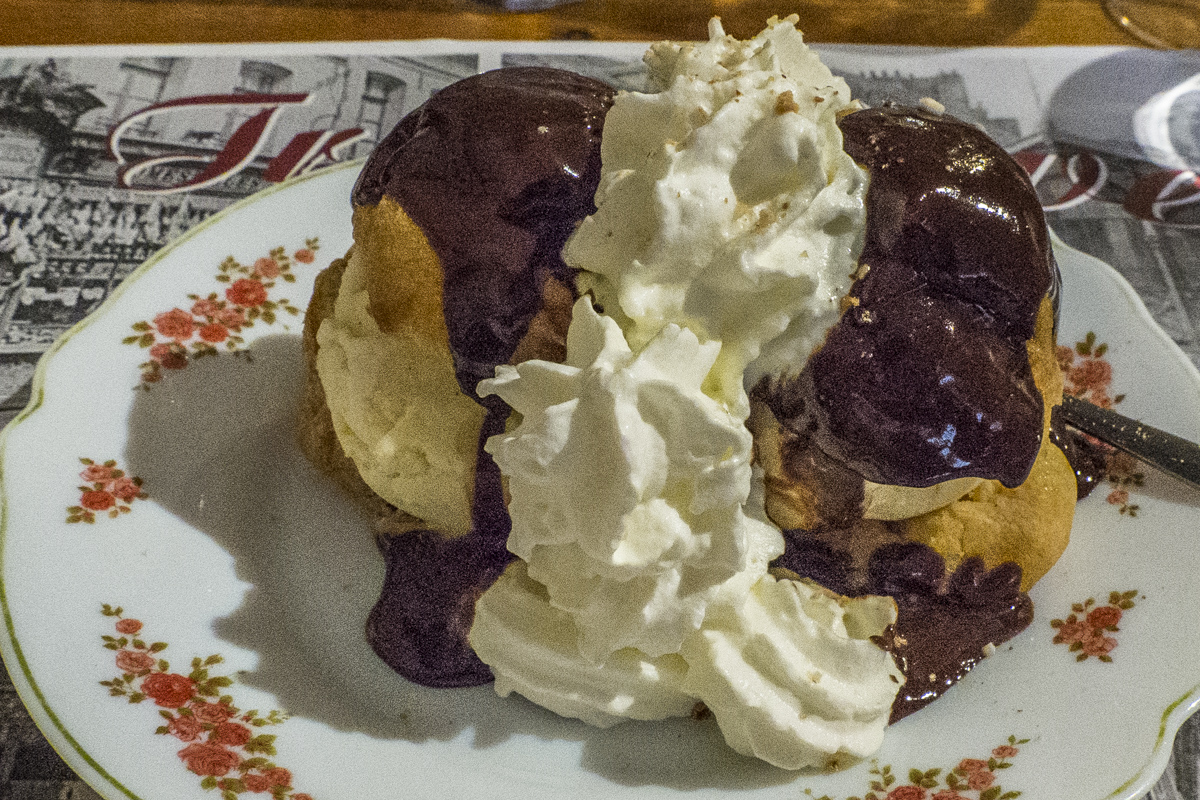 Where to Stay in Saint Omer in Pas de Calais, France

The Ibis Hotel is right in the centre of Saint Omer, in the shadow of its cathedral so it is very convenient for exploring the town. There is a pubic car park behind the hotel and it is also a short walk from the free car parking by the ramparts of the town. The compact rooms offer all the facilities for a comfortable stay. There is a bar and a restaurant on the ground floor. The latter serves an excellent breakfast. As a base for a city base it suited me very well. 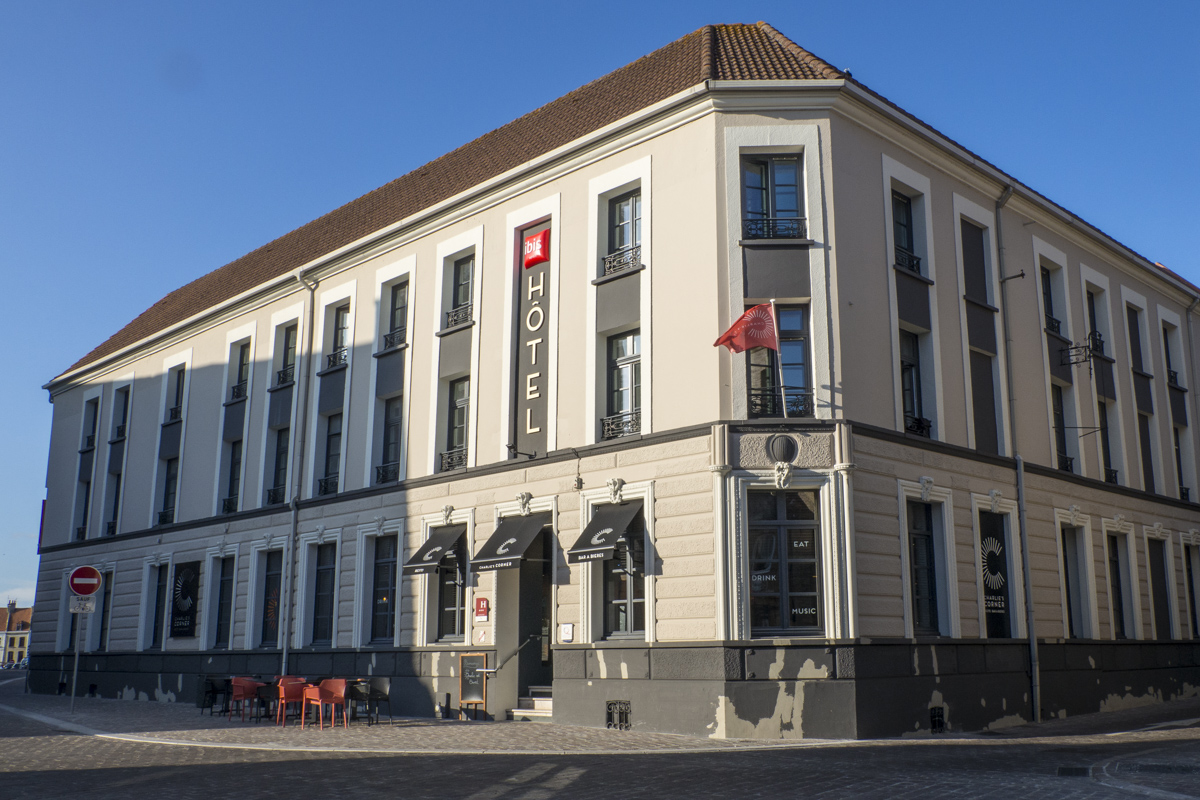 The Ibis Hotel in the Centre of Saint Omer in Pas de Calais, France

How to Get to Saint Omer in Pas de Calais, France

I took my car across to France on the DFDS car ferry crossing from Dover to Calais. It was a very pleasant crossing especially as I took advantage of the Premium Lounge enjoying a comfortable seat, a nice selection of drinks and snacks and free WiFi.
On arrival in France it took me about an hour to drive to Saint Omer via the A16 motorway.

This article was based on the personal experience of Valery, an ExperiencedTraveller.Saint Omer was occupied by the Germans